Please note: The newsletter will pause for Martin Luther King Jr. Day. Back in your inbox on Tuesday.

New modeling estimates that one in three residents of Los Angeles County — more than 3 million people — has been infected with the coronavirus. The astonishing figure has actually slowed the pace of transmission as the virus comes into contact with people who have likely developed immunity. “Unfortunately, we are still engaging in behaviors that facilitate spread of the virus, so it is still able to find plenty of susceptible people to infect,” a health official said. L.A. Times 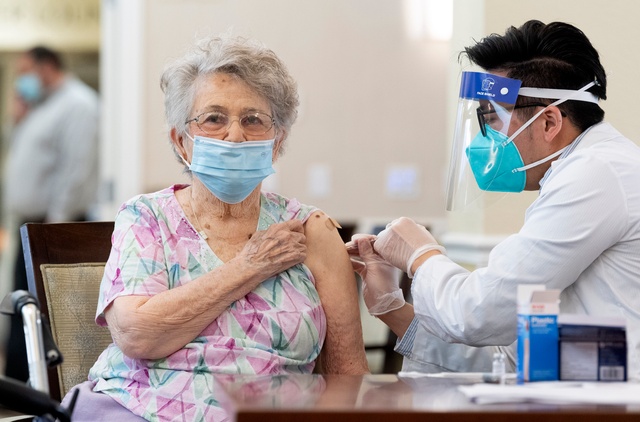 A woman received a Covid-19 vaccine at the Emerald Court senior living community in Anaheim on Jan. 8.

Wednesday's news that Californians 65 years and older could get a coronavirus vaccine gave way to frustration as phone lines crashed under a flood of requests and many people were told they might have to wait weeks. Coordination has been a problem, experts said. “Almost every practical question I ask anybody, the answer I get is a shrug of the shoulders,” UCSF's Dr. Robert Wachter told the L.A. Times. “It is not good. It just feels like the plans have been made without any attention to the practicalities of the last mile.” L.A. Times | S.F. Chronicle

As of Thursday, Texas had administered more inoculations than California, despite receiving about 1.4 million fewer doses. Bloomberg

Disneyland announced that it was ending its annual pass program, blaming the uncertainty caused by the pandemic and the closure of the theme park. The nearly four-decade-old program changed the culture of the Happiest Place on Earth, making it a regular hangout for many Southern Californians. Die-hard fans were heartbroken by the news. O.C. Register | A.P. 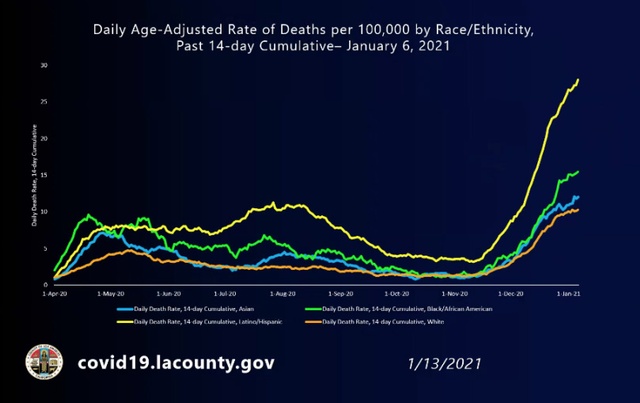 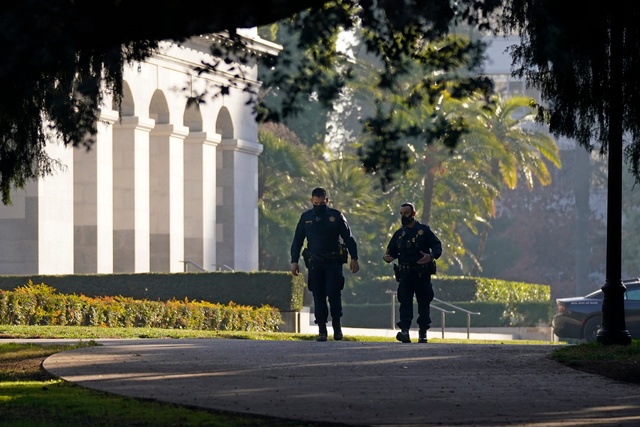 CHP officers patrolled the grounds of the state Capitol in Sacramento on Thursday.

Gov. Gavin Newsom on Thursday activated 1,000 National Guard troops to guard the state Capitol in Sacramento in anticipation of potential violence leading up the inauguration of Joe Biden. Officials also planned to erect barricades around the statehouse. Newsom said law enforcement was taking the threats very seriously. “I can assure you, we have a heightened, heightened level of security.” S.F. Chronicle | A.P.

A group planned to hold an event Sunday at the state Capitol “to peacefully protest our compromised election.” The CHP denied the permit, citing the potential for civil unrest. Sacramento Bee

The N.Y. Times published a fascinating dissection of how Facebook's algorithms radicalize many of its users. In three examples, individuals who used to post selfies and get a handful of likes discovered that they were showered with adulation when they pivoted to hyperpartisanship. Dominick McGee, a 26-year-old from Georgia, was coaxed so deep into the world of election misinformation that his family essentially disowned him. Yet he remained as committed to his beliefs as ever. 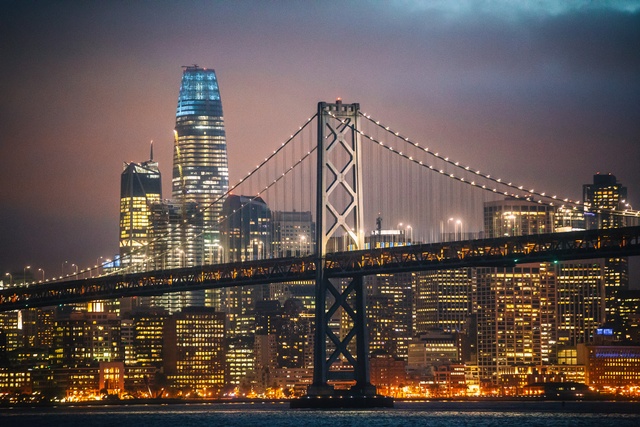 By some measures, San Francisco’s office market had its weakest year in decades in 2020, according to a new report. New office-leasing activity fell by a staggering 71% compared with the year before, while the vacancy rate rose higher than it was in the aftermath of the 2008 recession. Whether the city will make a comeback with the vaccine rollout is an open question as many companies rethink their office cultures. The Guardian | S.F. Chronicle

The reporter Nellie Bowles talked to more than two dozen tech executives and workers who have left San Francisco for other parts of the country over the last year. “I miss San Francisco. I miss the life I had there,” said John Gardner, 35, the founder of the startup Kickoff. “But right now it’s just like: What else can God and the world and government come up with to make the place less livable?” N.Y. Times

On this week's California Sun Podcast, host Jeff Schechtman chats with Hank Sims, the editor of Lost Coast Outpost, a news site based in Humboldt County. Sims talks about remote workers who flee California's cities for the soaring natural beauty of the North Coast. Some locals worry about being priced out, he said. "On the other hand, Eureka, where I am, the county seat, they're on a building spree." 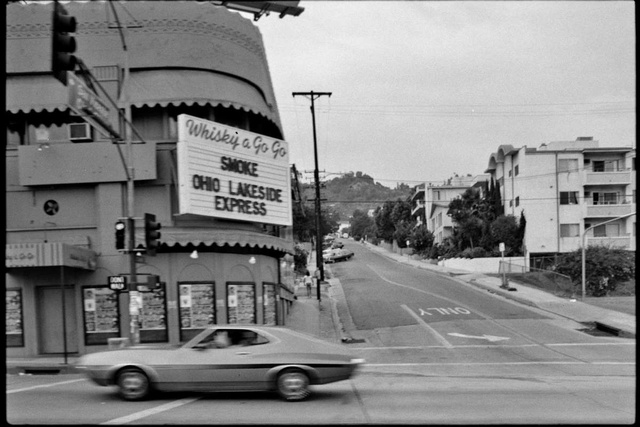 In 1966, long before Google Street View, the Los Angeles artist Ed Ruscha mounted a motorized camera in the bed of a Datsun pickup truck and captured thousands of photos along the city's Sunset Strip. Over the following decades, he repeated the ritual again and again. The resulting archive of an evolving Los Angeles is now featured in an immersive project called "12 Sunsets" launched by the Getty Research Institute. The art critic Sebastian Smee called it one of the most enthralling online art offerings of 2020. Washington Post 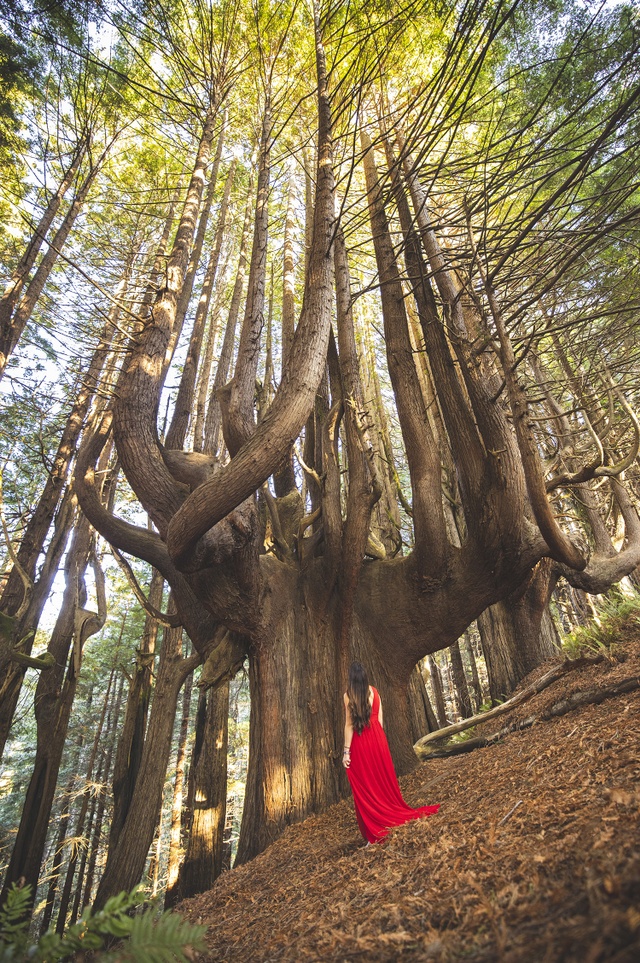 The redwoods at Shady Dell seem to split into numerous trunks.

Along the Mendocino coast, tucked about a half-mile up from the beach, is a grove of about two dozen redwoods shaped like unruly candelabras. Unique among California's redwoods, the strange appearance of the stand at Shady Dell resulted over centuries as fierce winds shattered the tops off trees and warped new growth into multiple prongs. It turned out to be the trees' saving grace: Lumbermen are said to have deemed the gnarled wood worthless. Atlas Obscura | Save the Redwoods