A new law gives child sex abuse victims the ability to file lawsuits until the age of 40, up from age 26. Beginning Jan. 1, it also opens a three-year window in which victims of any age can sue. The changes are expected to unleash an avalanche of litigation aimed at the Catholic Church, the Boy Scouts, school districts, and other institutions. Some could be bankrupted. "The breadth of it is staggering," a lawyer said. L.A. Times | A.P. 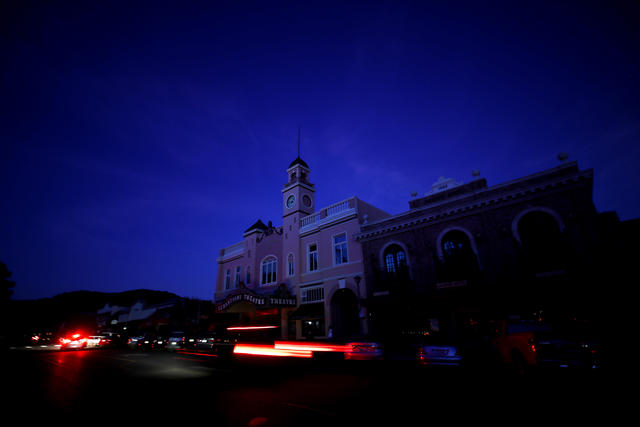 The Sebastiani Theatre went dark in Sonoma on Oct. 10.

Expect another 10 years of forced power outages before PG&E will be able to prevent its power lines from sparking fires. That prediction, issued by the bankrupt utility's chief executive, drew a rebuke during an emergency meeting with regulators. "This is not hard," said Marybel Batjer, president of the Public Utilities Commission. "You guys have failed on so many levels on pretty simple stuff. You need to get there now. Not at the end of the year. Now." N.Y. Times | NPR

California's outages have revived interest in microgrids, which can disconnect from the traditional grid and operate autonomously. Christian Science Monitor | N.Y. Times

On the campaign trail, Gavin Newsom pledged a response to California's housing crisis that would include massive homebuilding and statewide affordable housing on par with the effort to rebuild Europe after WWII. How much progress has been made so far? Not so much. "It seems like a pretty meaningful failure," an urban planning professor said. L.A. Times

A survey of Bay Area millennials found that many no longer believe home ownership is part of the American Dream. Mercury News 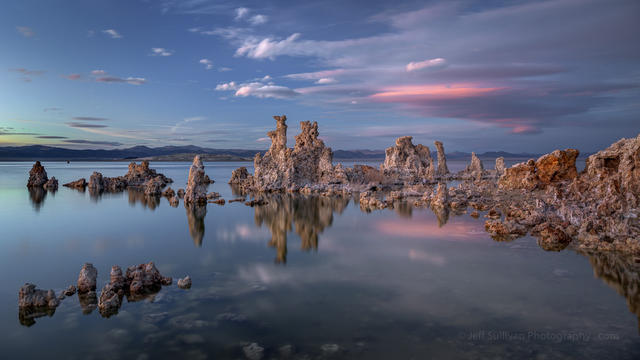 Worms with three sexes have been discovered in Mono Lake. The alien-looking lake in the Eastern Sierra is salty and arsenic-laden, with alkalinity equivalent to detergent. While fatal to fish or humans, it turns out to be chock-full of roundworms. A three-sexed species includes a variant with both male and female parts that can hatch its young in utero. "The cherry on top of all of that is that it can survive 500 the human lethal dose of arsenic," a researcher said, "which is quite fantastic." Atlas Obscura | Vice 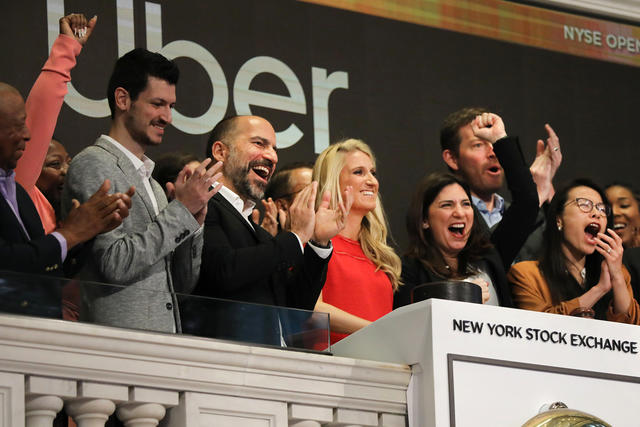 Uber CEO Dara Khosrowshahi and other employees attended the ringing of the opening bell at the New York Stock Exchange as the company went public on May 10.

Uber has sharply ramped up its use of H-1B visas to hire foreign workers even as it lays off hundreds of skilled employees, state and federal data showed. A Harvard professor said the San Francisco company shouldn't be using H-1Bs at all, "or maybe sparingly at best. It runs totally contrary to the intent of the H-1B program." Uber declined to comment. Mercury News

"This is totally awesome. I feel less stress. I'm not screaming as much."

"I'm really not supposed to be in this situation. In America, with my credentials, I should be able to actually take care of myself."

"I haven't treated myself the way I should. And so now I am."

N.Y. Magazine profiled five participants in Stockton's universal income experiment. Since February, they each have been receiving $500 a month, no strings attached. "The money can be transformative, yes, but it also seems to make them more themselves," the magazine wrote. N.Y. Magazine

A sprawling homeless camp has taken over a public trail in Sonoma County. It infringes so heavily on the popular connector between Santa Rosa and Sebastopol that county officials are recommending that trail users bypass it. A county supervisor called the camp "this sort of epicenter for lawlessness, this sort of symbol for, honestly, everything that's wrong in government." Press Democrat

A bicyclist filmed a trip along the trail. At least a couple people appeared to be shooting up. YouTube 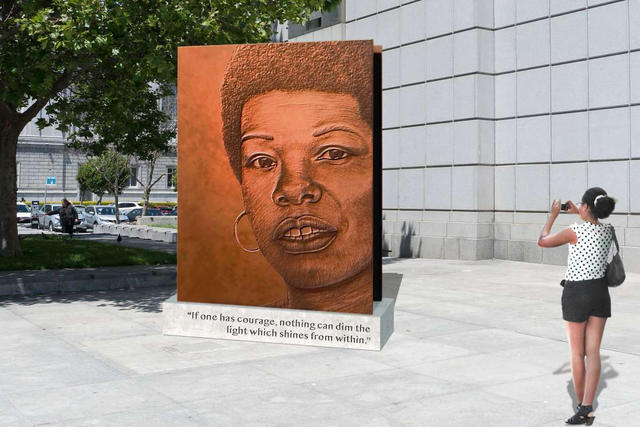 A sculpture proposal by artist Lava Thomas was accepted — then rejected.

San Francisco organized a competition to design a monument to Maya Angelou outside the Main Library. After more than two years, a winner was chosen by a panel that included Angelou's son. They called it powerful and "quietly radical." Everyone appeared to be happy — except for the supervisor who drafted the monument legislation. Now she has scrapped the whole process and demanded a do-over. The winning artist quit in disgust. The S.F. Chronicle's urban design critic John King called that outcome "an absolute embarrassment that's all too typical of S.F.'s corrosive political culture." S.F. Chronicle | NBC Bay Area

Authorities seized 18 pounds of fentanyl in Orange County. That's enough of the synthetic opioid to make about 4 million lethal doses. "The threat this extremely potent drug poses to our community is increasing exponentially, not subsiding," Sheriff Don Barnes said. Deaths in Orange County attributed to fentanyl have risen from 14 five years ago to 93 in 2018. O.C. Register | A.P. 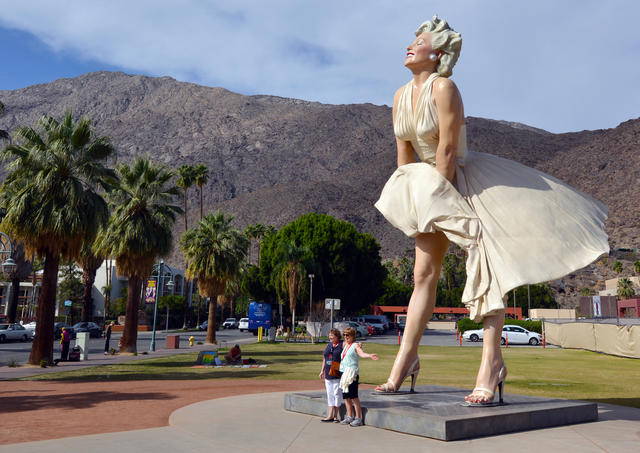 Opinions are divided on "Forever Marilyn" in Palm Springs.

When Palm Springs installed a 26-foot-tall statue of Marilyn Monroe with her dress flying up in 2012, many locals embraced the artwork as a celebration of the city's history as a playground for Hollywood elite. Now there are plans to bring the "Forever Marilyn" statue back permanently. But times have changed. A debate has now broken out over whether the portrayal is appropriate. "I'm hoping the next generation of women can be seen as full three-dimensional people," one critic said. Desert Sun

On Saturday, groups of pro- and anti-Trump demonstrators clashed on the Santa Monica Pier. During a scuffle caught on video, a man wearing a red "Make America Great Again" hat wildly sprayed the crowd with bear repellent. A suspect with a "fairly extensive" criminal record was arrested, the police said. L.A. Times | A.P. 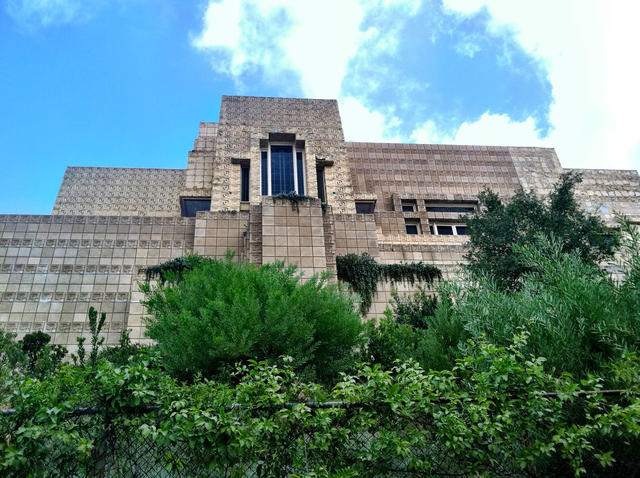 The Ennis House is constructed of more than 27,000 decomposed concrete blocks

Frank Lloyd Wright’s Ennis House stands atop a hill at the edge of L.A.'s Griffith Park as among the best residential examples of Mayan Revival architecture in the country. It's less of a home than a giant work of art, which explains its appearance in a number of films, most notably "Blade Runner." Now the Ennis House has been snapped up by a mystery buyer for $18 million, making it the most expensive Wright home ever sold. Architectural Digest | Variety 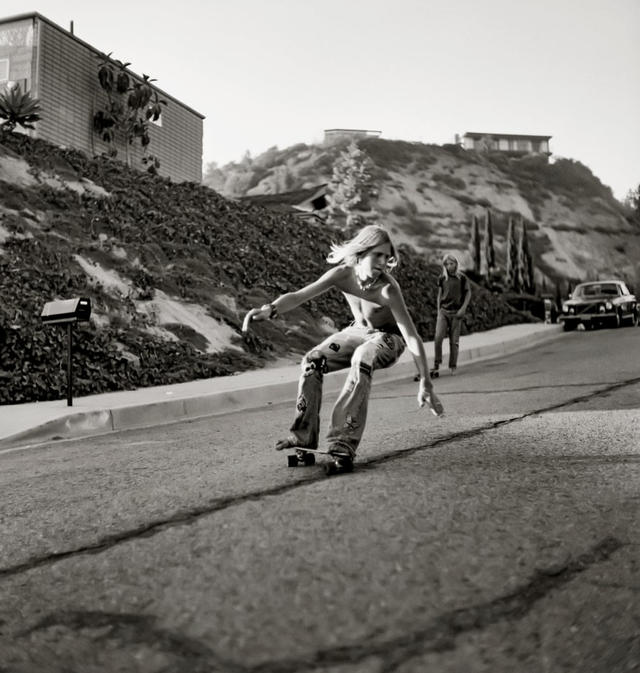 "Bull in the Mount Olympus neighborhood in the Hollywood Hills, 1976."

In the 1970s, photographer Hugh Holland captured Southern California's emerging culture of skateboarding in drainage ditches, empty pools, and asphalt streets. A collection of his black-and-white images, some not previously seen, is now being exhibited at M+B in Los Angeles. It accompanies his latest monograph, "Silver. Skate. Seventies," a celebration of California youth in all its wiry, sunny, freewheeling glory. Here are 11 of the images. The Guardian 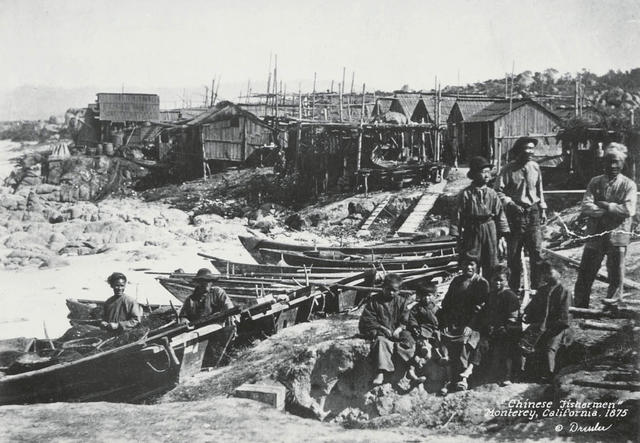 Chinese fisherman in Monterey in 1875.

"Cannery Row in Monterey in California is a poem, a stink, a grating noise, a quality of light, a tone, a habit, a nostalgia, a dream."
— John Steinbeck, in his novel "Cannery Row"

Settled by Chinese fishermen in the 1850s, Monterey Bay grew into one of the world's busiest fishing ports.

By the 1930s, boats were hauling hundreds of tons of sardines to shore every day. Immigrant workers at corrugated canneries ground up the fish as fertilizer and chicken feed or canned it for grocery shelves. Then seemingly all at once the sardines vanished, a collapse blamed on a combination of overfishing and natural population fluctuations. 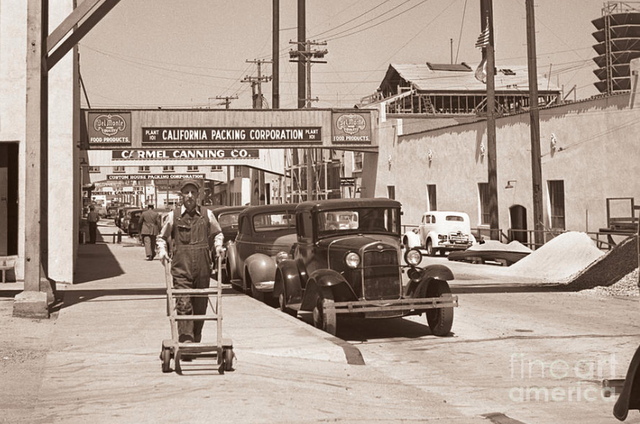 Cannery Row in 1945. The fishing community went from boom to bust.

The bustling fishing community that inspired Steinbeck became a ghost town, but not for long. Entrepreneurs refurbished the canneries, opening restaurants, shops, and hotels. On the site of the old Hovden Cannery rose the crown jewel of a new tourist destination: the Monterey Bay Aquarium, which opened its doors on this week in 1984.

Today, the aquarium draws roughly 2 million visitors a year and doubles as a leading center of conservation and research. The bay too has been revived. Protected in 1992 as part of the Monterey Bay National Marine Sanctuary, it's one of the world's most diverse marine ecosystems. MCHSmuseum.com | CanneryRow.com 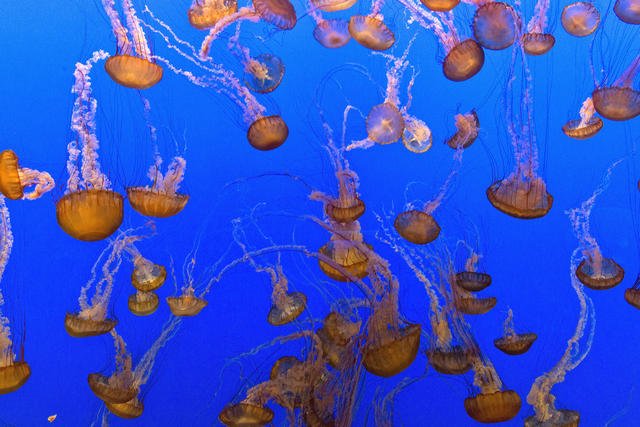 Jellyfish at the Monterey Bay Aquarium.