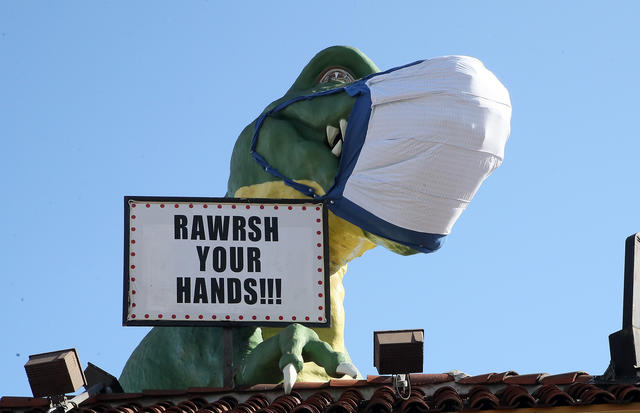 A reminder from the Ripley's Believe It Or Not museum in Hollywood last week.

The number of coronavirus infections in Los Angeles County may be 55 times higher than what's been officially reported. That's a preliminary finding of a joint study by USC and the county that estimates roughly 4 percent of adults have antibodies to the virus in their blood, or as many as 442,000 people. Two insights suggested by the results: Covid-19 may pose a much lower risk of death than previously thought, and silent carriers unaware of their infections may be far more widespread. L.A. Times | A.P.

The Southern California study came days after similar findings were announced by Stanford researchers who obtained blood samples in Santa Clara County. But that research is now facing intense criticism. A Columbia University statistician portrayed it as rife with sampling and statistical imperfections. "They're the kind of screw-ups that happen if you want to leap out with an exciting finding," he wrote. Neither the USC nor the Stanford studies have been peer reviewed. Mercury News | SFGate.com 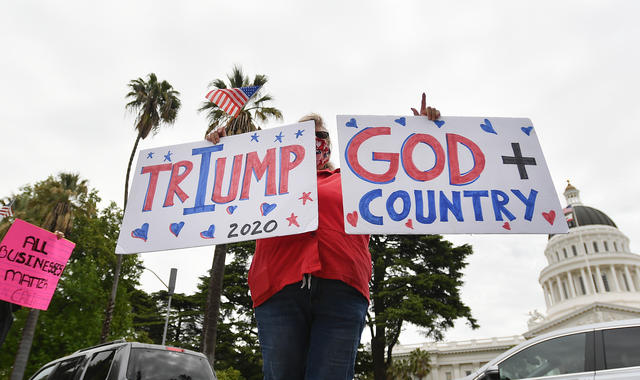 Protesters gathered at the state capitol building in Sacramento on Monday.

Hundreds of protestors converged in Sacramento and Newport Beach on Monday in the latest expressions of discontent over perceived government overreach in response to the coronavirus pandemic. The rally at the state capitol was organized by a group that also protested tighter vaccination rules last summer. "We're letting fear rule today," one protester said. "I believe in Jesus. And I'm not afraid of this." S.F. Chronicle | L.A. Times | O.C. Register

For reasons that are unclear the CHP issued a permit for the Sacramento rally, even as it appeared to violate a state order banning large gatherings. Sacramento Bee

Facebook is removing event pages for anti-lockdown rallies in California and other states. A company spokesman said posts are being taken down if they defy government social distancing guidelines. The move drew howls of protest from some prominent Republicans, including the president's son, Donald Trump Jr. "Why is Facebook colluding with state governments to quash peoples free speech?" he wrote. recode | The Hill

A gradual decline of Bay Area hospitalizations, a huge jump in L.A. County cases attributed to a testing backlog, and a slowing of reported infections in Riverside County. Here are the latest coronavirus totals, according to tallies by the S.F. Chronicle and N.Y. Times: 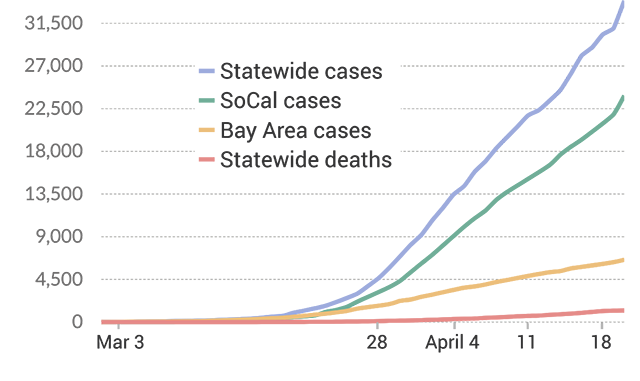 Cities and counties across the state have begun taking steps to relax coronavirus restrictions. Gov. Gavin Newsom acknowledged facing pressure from local officials to modify his stay-at-home order, but stressed the importance a statewide strategy. The "virus knows no jurisdiction, knows no boundaries" and could easily spread into neighboring counties, he said. L.A. Times

Many people in rural California have very different views about reopening than their counterparts along the coast. In sparsely populated areas, social distancing, in some ways, is already a way of life. Fresno County's top health official said Central Valley communities should be allowed to move forward on their own. "I think that the reopening, whenever and however that happens, may actually be more chaotic than the shutting down," he said. Politico 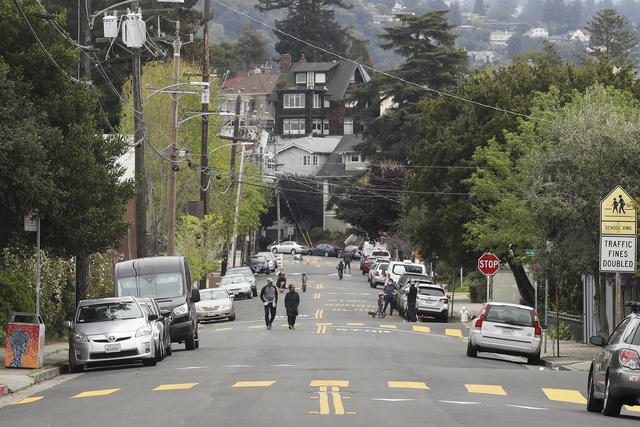 People walked and biked on Oakland's 42nd Street, which was closed to traffic, on April 11.

"As if out of an earlier era, small children are riding bikes in the middle of the street without their parents needing to worry."

Urban planners across the U.S. are watching closely as Oakland experiments with restricting vehicle access to 74 miles of city street. So far the response has been overwhelmingly positive. There's talk of making some of the so-called slow streets permanent. CityLab

As many Californians look forward to a rollback of social distancing measures, medical workers are living in perpetual fear — with no end in sight. Some are preparing wills. Dr. Amit Gohil, who has asthma and diabetes, risk factors for Covid-19, said he agonizes over his children. "If I die next week what do I want to teach the kids? What haven't I taught them?" he said. L.A. Times 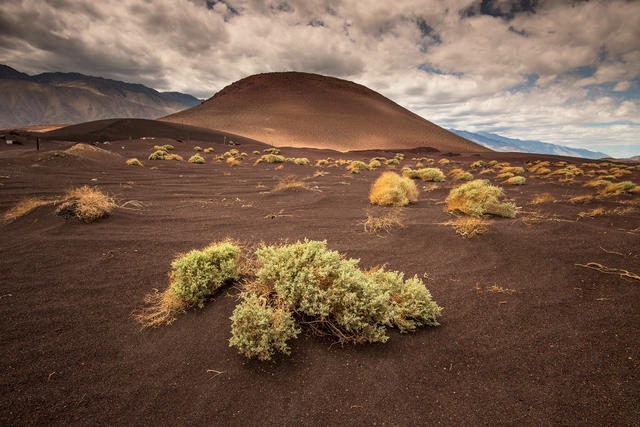 The San Andreas Fault has been the traditional locus of our fears about earth-shaking doom. But Nevada's state geologist, James Faulds, believes an emerging fault system along the California-Nevada border is where the real action will be. If he's right, a journalist wrote, a stretch of Route 395, "from the wastes of the Mojave Desert to the night-lit casinos of Reno, will someday be beachfront property." Wired

"Nuts to that goddamn line!"

If you want to settle in, here's a 90-minute compilation. The Film Archives/YouTube