Please note: The newsletter will pause for a long weekend. Back in your inbox Tuesday. 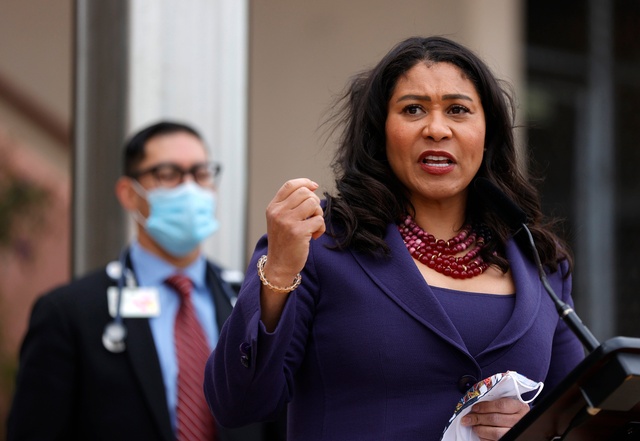 Mayor London Breed said San Francisco was expected to move into the orange tier by March 24.

Next up: Orange tier.

With California's coronavirus metrics continuing to improve, several counties are already in position to advance from the red tier to the looser orange level next week, allowing the reopening of offices, outdoor bars, and outdoor live entertainment and festivals. According to one analysis, they include San Francisco, Santa Clara, Trinity, Lassen, and Yolo counties. Los Angeles and Orange Counties remained at least two weeks from advancing. L.A. Times | S.F. Chronicle

In its initial draft, California's ethnic studies curriculum equated capitalism with racism, excluded anti-Semitism as a form of hate, and used impenetrable jargon like misogynoir and cisheteropatriarchy. On Thursday, after two years of debate and many rewrites, state education officials approved a final 900-page version of the high school curriculum, which will initially be an elective course but could become a graduation requirement. All 20 writers of the original draft asked to withdraw their names from the final document, saying it had been gutted under political and media pressure. EdSource | A.P. 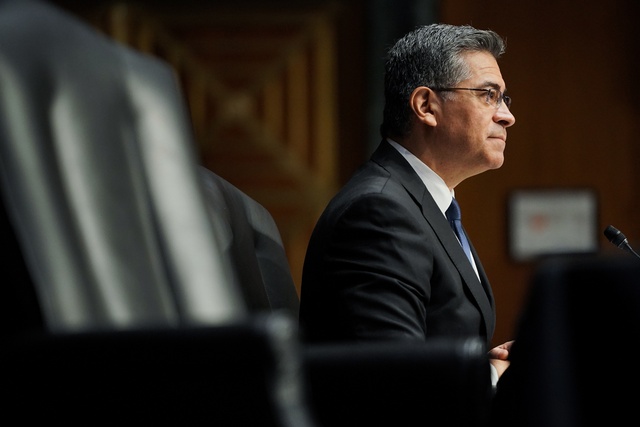 Xavier Becerra testified during his Senate confirmation hearing on Feb. 24.

California’s Xavier Becerra got just one Republican vote, from Sen. Susan Collins, but it was enough to confirm his appointment as President Biden’s health and human services secretary. The vote was 50 to 49. Republicans had attacked Becerra's support of abortion rights and “Medicare for all.” He now becomes the first Latino to lead HHS, the largest federal department in terms of spending. Washington Post | N.Y. Times

The House on Thursday approved legislation that could create a path to citizenship for 2.5 million unauthorized immigrants, including those brought to the U.S. as children, known as Dreamers. Hours later, they approved a second measure that would eventually grant legal status to nearly a million farmworkers. California is home to an estimated 200,000 Dreamers. Growers estimate as many as 75% of the state's farmworkers, numbering about 400,000, are undocumented. Politico | L.A. Times 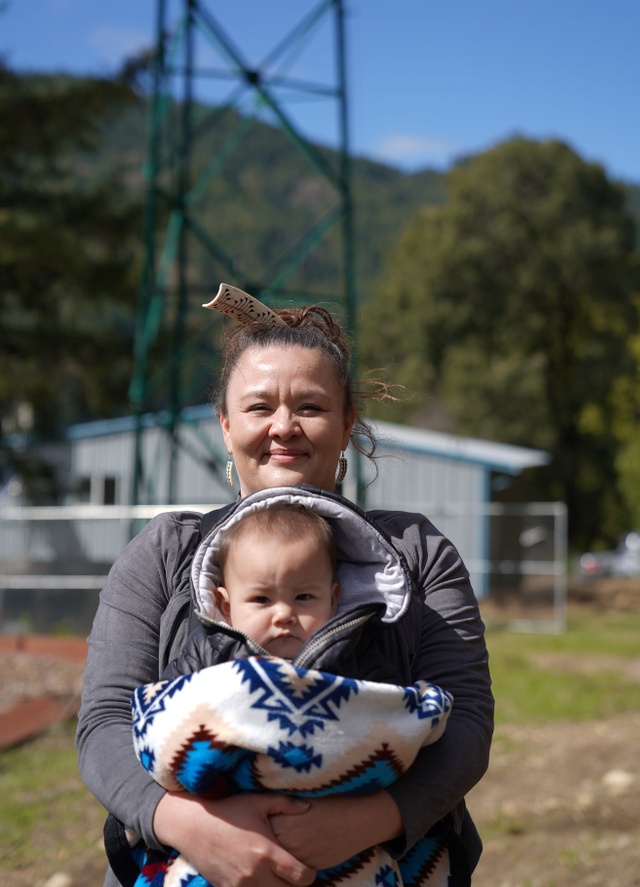 Mindy Natt, a Yurok tribal member, and her son attended an opening celebration for the new tower, seen in the background.

One outcome of the federal government's pandemic assistance: An isolated North Coast tribal community now has high-speed internet for the first time. The Yurok Tribe used $2.1 million from the federal CARES Act to install a 150-foot internet tower in a remote corner of its reservation, which straddles forested lands along the Klamath River. Tribal leaders said the service would be life-changing, allowing remote work, medical visits, and schooling. North Coast Journal | Eureka Times-Standard

A GoFundMe set up for an Asian American grandmother who was attacked on the street in San Francisco had raised an incredible $599,000 as of early Friday. Xiao Zhen Xie, 75, said she was punched by a man without provocation as she leaned against a light pole on Wednesday, leaving her with a badly bruised face. Witnesses said Xie fought back, injuring the man. Police said the suspect, who was arrested, had attacked an 83-year-old Asian man earlier that day. S.F. Chronicle | CBS SF 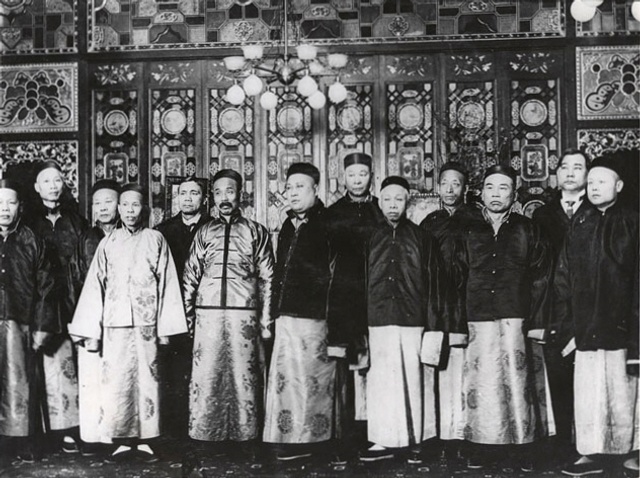 When Chinese immigrants came to help build California in the latter part of 19th century, epidemics of smallpox and cholera stalked the Bay Area. Locals officials commonly blamed outbreaks on the inhabitants of San Francisco's Chinatown. They also withheld health services from the community and raised the costs of treating Chinese patients at municipal hospitals. In response, the diaspora organized and built their own. Tung Wah Dispensary, America's first Chinese-American medical facility, opened its doors in 1900. Later renamed Chinese Hospital, it remains the only independent hospital run by the Chinese community in the U.S., with a dozen locations across the San Francisco peninsula. Atlas Obscura recalled the history last April.

On this week's California Sun Podcast, host Jeff Schechtman talks with Emilio Garcia-Ruiz, who left his leadership role at The Washington Post to become the new editor-in-chief of the San Francisco Chronicle. Asked what has surprised him most since arriving in the Bay Area, Garcia-Ruiz said, "The fact that the place is not nearly as progressive as I expected." 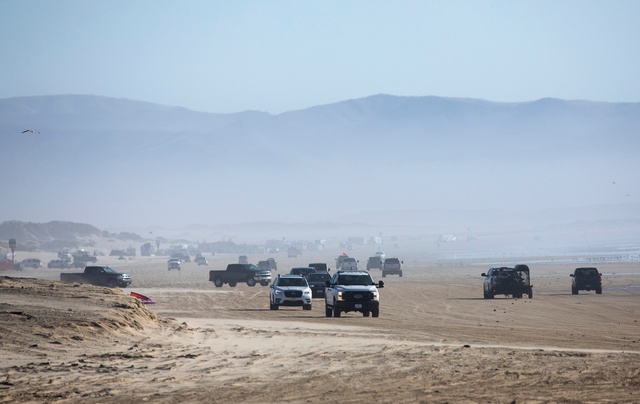 Vehicles ride onto the sand at Oceano Dunes, located an hour and a half north of Santa Barbara.

Oceano Dunes, a rolling sea of sand along the Central Coast, is the only state park where off-roaders can drive on the beach — and environmentalists have been fighting to shut them down for decades. On Thursday, they won. In a historic decision, the California Coastal Commission voted unanimously to phase out off-roading at the dunes by 2024, citing the damage to sensitive habitats and squalls of dust and pollution that drift into nearby neighborhoods. Legal challenges are all but certain. The Tribune | CalMatters 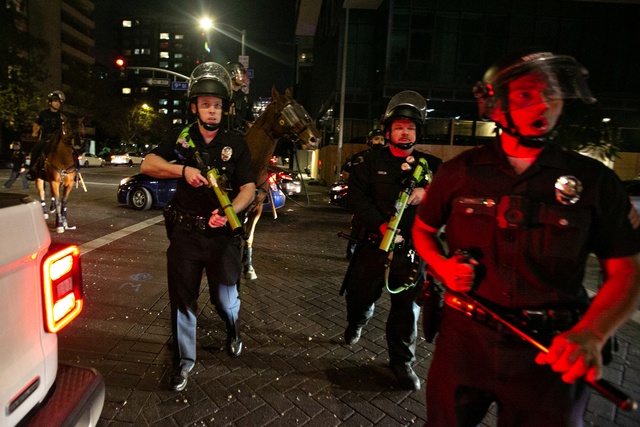 After the Dodgers won the World Series in October, street celebrations in Los Angeles got out of hand, leading to numerous arrests. The police department, however, asked city prosecutors to charge just one person for failure to disperse: a journalist who had recorded video of heavy-handed tactics by officers and shared it on Twitter. Lexis-Olivier Ray, who was covering the upheaval for L.A. Taco, said it feels an awful lot like retaliation. L.A. Times

Spread across the Southern California desert are a series of isolated pumping plants and reservoirs that bring drinking water from the Colorado River to homes in Los Angeles and beyond. In a profile of the man once in charge, Donald Nash, the L.A. Times opened a disturbing window into the dysfunctional work culture that was allowed to fester in the untamed frontier. Over the years, Nash was accused of bullying, erratic behavior, and sexual harassment. After the district finally told Nash he was out, he was found in his home, dead from a self-inflicted shotgun wound.