Roughly 5.7 million Californians are now poised to get one-time payments of $600 after state lawmakers approved a $7.6 billion Covid-19 relief package on Monday. Rebates will largely go to those with annual incomes of $30,000 or less and will include undocumented immigrants who file tax forms. A lawmaker's advice to those looking to get paid quickly: file your tax returns early. A.P. | S.F. Chronicle

See if you qualify. 👉 Mercury News 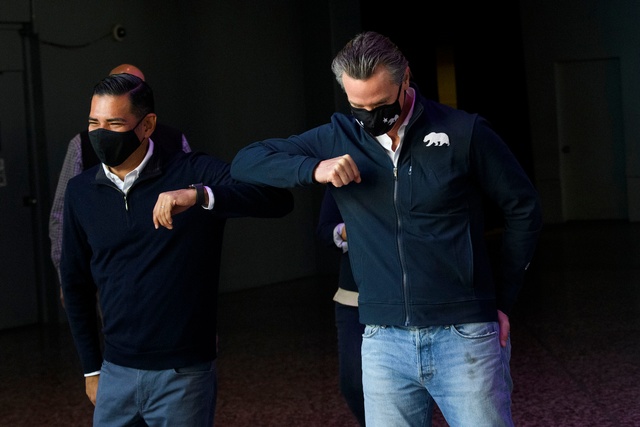 In recent days, more school districts have set reopening dates for their youngest students — Sacramento: April 8; Berkeley: March 29; San Luis Obispo: Feb. 24 — but perhaps none has pleased Gov. Gavin Newsom as much as Long Beach Unified. The district is now the largest in California to set a reopening date — March 29. “Long Beach is a model," Newsom said on Monday. "I want to encourage that to be replicated all throughout the state of California.” No word yet from San Diego, Los Angeles, Fresno, or San Francisco. L.A. Times | Long Beach Post

See a map with reopening statuses by county. 👉 Covid19.ca.gov

Black and Latino Californians are being vaccinated at much lower rates than whites. One program aimed to rectify the disparity by delivering access codes to organizations in underserved Black and Latino areas that could be used to schedule appointments. The codes, however, have somehow circulated among residents of affluent neighborhoods. A woman in downtown L.A. said she had been sent three codes from different people over the last few days. "Nobody thinks they're doing something wrong," she said. L.A. Times 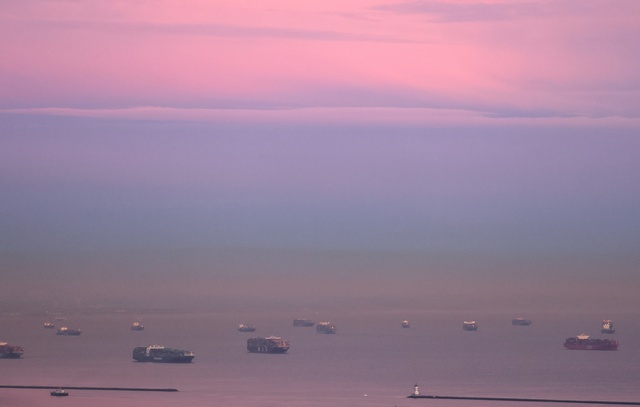 Shipping containers anchored off the coast near Long Beach on Feb. 1. 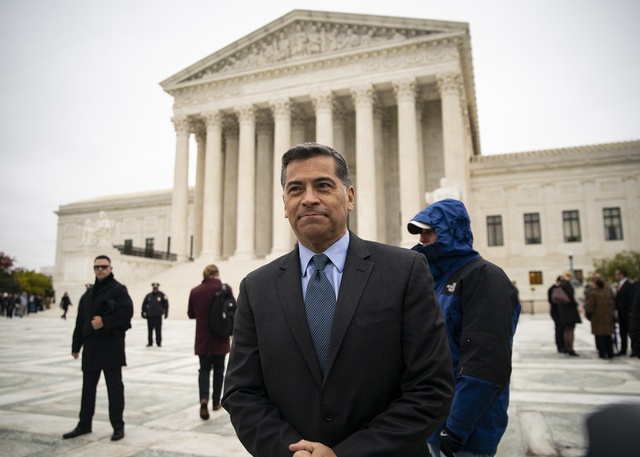 California Attorney General Xavier Becerra outside the Supreme Court in 2019.

In 2009, when President Obama rejected coverage for unauthorized immigrants in the Affordable Care Act, Xavier Becerra, then a California congressman, called the decision "more than disturbing." Now, as Becerra prepares to assume the leadership of Health and Human Services, he will have the power to make public benefits a reality for people in the country illegally. His convictions on the issue, a colleague said, are "exceedingly deep." Politico

In 2014, California awarded a contract to build a 65-mile section of the state's bullet train through the San Joaquin Valley to the lowest bidder, a Spanish company that promised $300 million in cost savings. Seven years later, those promised savings have turned into cost overruns of more than $800 million. Experts called it yet another black eye for a project beset by delays and ballooning costs. L.A. Times 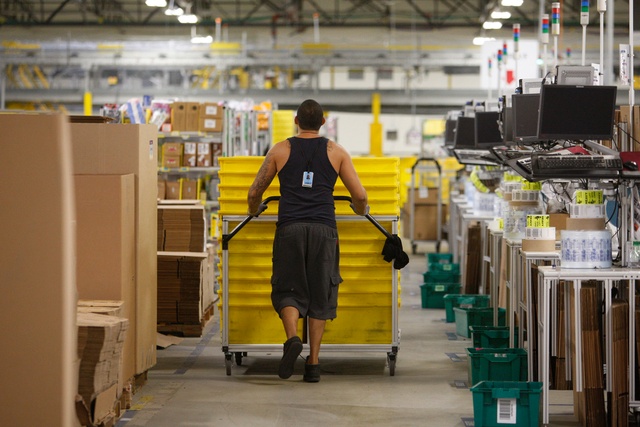 A worker processed shipping orders at the Amazon warehouse in San Bernardino in 2013.

Nowhere is Amazon's influence more evident than in the Inland Empire, where it employs more than 40,000 people in 14 facilities and two logistics air hubs. A N.Y. Times Magazine piece described how the e-commerce behemoth is so enmeshed in the region that it's become a high school career track:

"I visited the campus as a dozen students sat clustered at work tables inside an air-conditioned classroom, which was designed to emulate the inside of an Amazon facility. On one wall, Amazon’s giant logo grinned across a yellow and green banner. The words 'CUSTOMER OBSESSION' and 'DELIVER RESULTS' were painted against a corporate-style yellow backdrop. On a whiteboard, a teacher had written the words 'Logistics Final Project,' and the lesson of the day was on Amazon’s '14 Leadership Principles.' Each teenager wore a company golf shirt emblazoned with the Amazon logo."

California State University will pay $39.5 million to a student who suffered a brain injury from heat stroke during a fitness class. The payout, announced Monday, is believed to be the largest injury settlement ever paid by the university system. In September 2018, Marissa Freeman, then a junior at Cal State San Bernardino, collapsed toward the end of a 5K run in 95-degree heat, suffering brain damage, cardiac arrest, and organ failure. San Bernardino Sun | A.P. 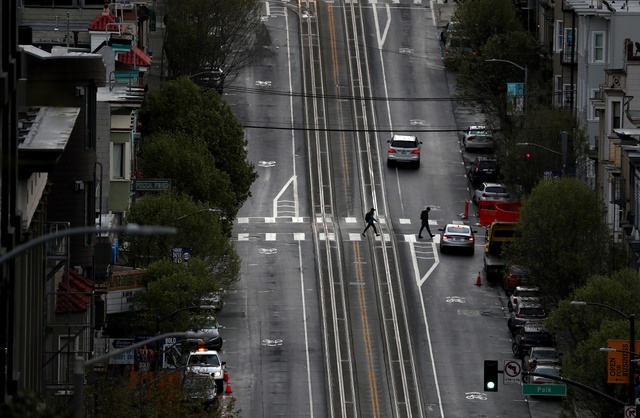 In San Francisco, rents have fallen so precipitously that for some renters, it's now cheaper than its blue-collar neighbor, Oakland. Amar Saini, an Oakland native, just moved to an apartment near the Bay Bridge. "If you would have told 15-year-old me that 15, 16 years down the road that Oakland was going to become more expensive it would have been literally shocking," he said. "I just don’t believe it.” L.A. Times

There's a real movement to lop off rural parts of Northern California and the Pacific Northwest and fold them into a Greater Idaho, and in May some Oregonians will cast votes on the proposal. Ballot questions qualified in five eastern counties on whether to support moving the border. While the quest may be far-fetched, it's a remarkable expression of rural frustration with Democratic state rule. CBS2 | KTVB 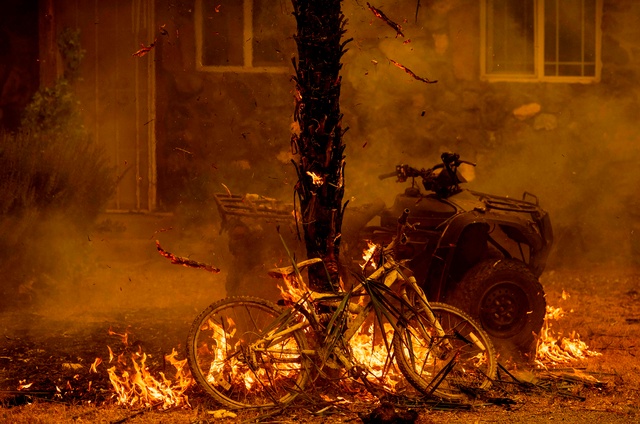 A bicycle and palm tree burned in Napa on Aug. 18.

Last summer, a lightning siege ignited California wildfires that were fanned by abnormal winds into historic proportions. Now scientists think they know an origin of those winds: three rapid-succession typhoons on the Korean Peninsula that set off a meteorological domino effect across the Pacific and changed the pattern of air flow over the U.S. The research didn't address what caused the typhoons, or what caused the events that caused the typhoons. The Guardian | Phys.org 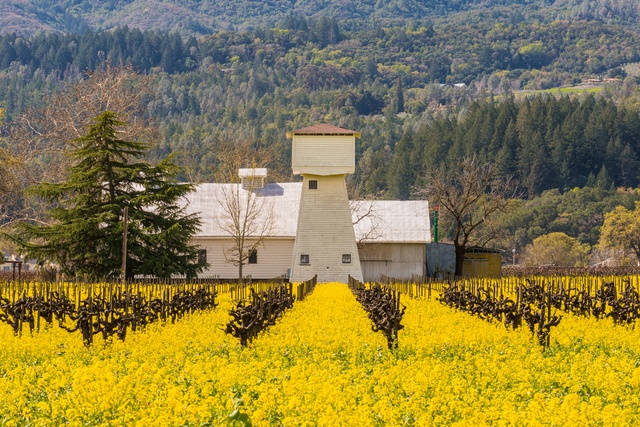 Rows of mustard in Napa Valley.

Before the springtime poppies of Antelope Valley come the late-winter mustard blooms of Wine Country. Spanish priests of the 18th century carried mustard seeds with them as they established a chain of missions along the California coast. The crop was later embraced by vineyards as a cover crop, planted between the vines to promote soil health. Their radiant yellow blossoms, stretching to the horizon, are now an attraction in their own right. Here's a nice photo tour of 10 of the prettiest spots in Sonoma County. 👉 Sonoma magazine

I will never put ads in this newsletter. But starting soon I'm testing a Sunday edition of the California Sun that will be supported by ads. It will be sent to non-paying subscribers and include a sampling of items from the weekday edition.

Have a message you want to get in front of roughly 25,000 California news readers?