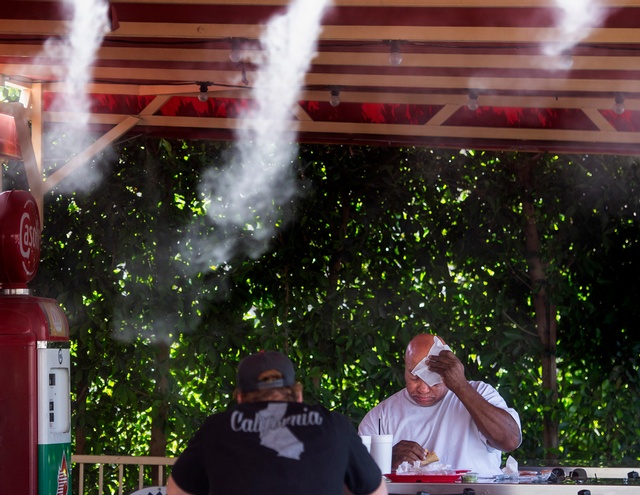 Patrons were misted at Caprice Cafe in Redlands on Tuesday.

The managers of California's power grid warned that energy supplies could fall short of demand on Thursday, as a punishing heat wave engulfs the state. Officials issued a "flex alert," a voluntary call to conserve energy, for Thursday evening. Forecasters said temperatures could rise well into triple digits in places across California. Death Valley was expected to match its hellish high from Wednesday: 125 degrees. AccuWeather | A.P. | SFGate.com 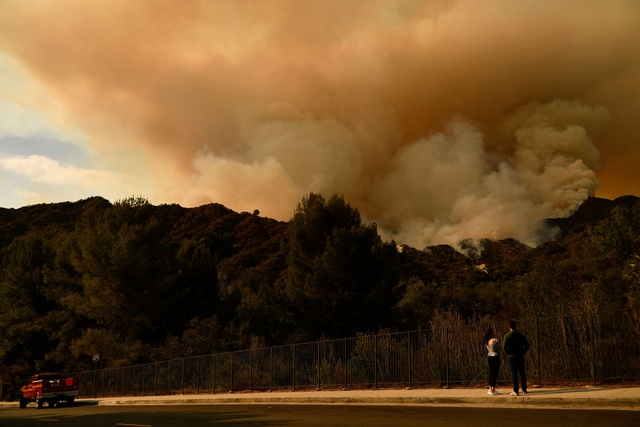 A wildfire tore through Topanga State Park on May 15.

The L.A. Times reached out to several of the more than three dozen California organizations awarded money by the philanthropist MacKenzie Scott. The leader of a women's rights group thought the offer was spam. A museum president didn't believe it for days. Many echoed the same refrain about gifts such as $15 million, $25 million, and $40 million: They were the largest sums they ever received and would enable game-changing leaps in their work. 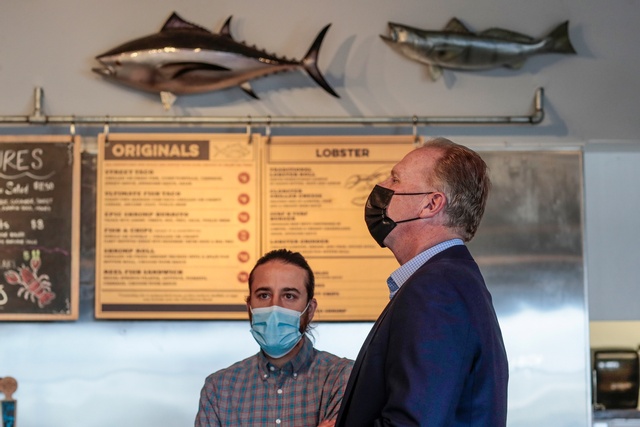 As reporters on California's recall election have lavished attention on John Cox's bear and an Olympian-turned-reality TV star, Kevin Faulconer has been releasing policy proposals. The fiscally conservative but socially moderate Republican has recommended, for example, eliminating state income taxes on individuals making less than $50,000. The election calls for a "serious" candidate, Faulconer told CalMatters. Others have used another adjective for the former San Diego mayor: "boring.” 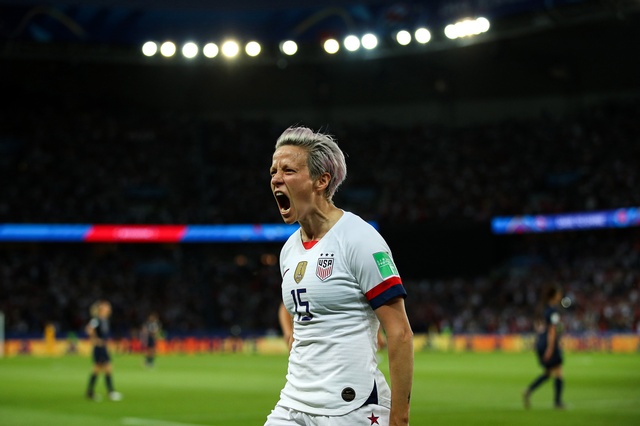 Megan Rapinoe celebrated a goal against France during the 2019 FIFA Women's World Cup.

Victoria's Secret's is attempting a radical brand turnaround: swapping its angels for activists. Gone will be the winged supermodels, replaced by seven women known for their accomplishments. Prominent among them will be Redding's own Megan Rapinoe. Victoria's Secret, the soccer star said, was “patriarchal, sexist, viewing not just what it meant to be sexy but what the clothes were trying to accomplish through a male lens and through what men desired." But she's been convinced it wants to change. N.Y. Times | New York Post

A viral video of a daytime shoplifting incident at a San Francisco Walgreens, in which a man filled a garbage bag with items then rode a bike past security guards out of the store, highlighted how mundane such crimes have become in the city. A retail crime expert said San Francisco is now "one of the epicenters of organized retail crime." Theft at Walgreens stores in the city is four times the average at its other stores. Spending on security guards is 35 times more. CNN

Fun fact: Sunflowers aren't just pretty, they demonstrate an elegant mathematical formula. It's known as the Fibonacci sequence — a series of numbers in which each number is the sum of the preceding two (1, 1, 2, 3, 5, 8, and so on). Count the clockwise and counterclockwise spirals of seeds that make up a sunflower's head, and you'll usually find a pair of numbers from the sequence: 34 and 55, or 55 and 89, or 89 and 144. Here's a great little explainer. 👉 YouTube (~2:40 mins)

Why am I telling you about sunflowers? It's sunflower season in the Sacramento Valley, the heart of American sunflower seed production. A drone camera pilot recently did a flyover of a brilliant yellow field in Colusa County. 👉 YouTube (45 secs)

The Salton Sea is dying and the architect Nikola Lakic has a solution: Lay 125 miles of pipe to the Gulf of California and fill it back up with ocean water. The multibillion-dollar project is not idle talk. It's among 11 formal "sea-to-sea" proposals that California is taking seriously. The Desert Sun dispatched a reporter to examine the project. The conclusion: It's technically feasible. 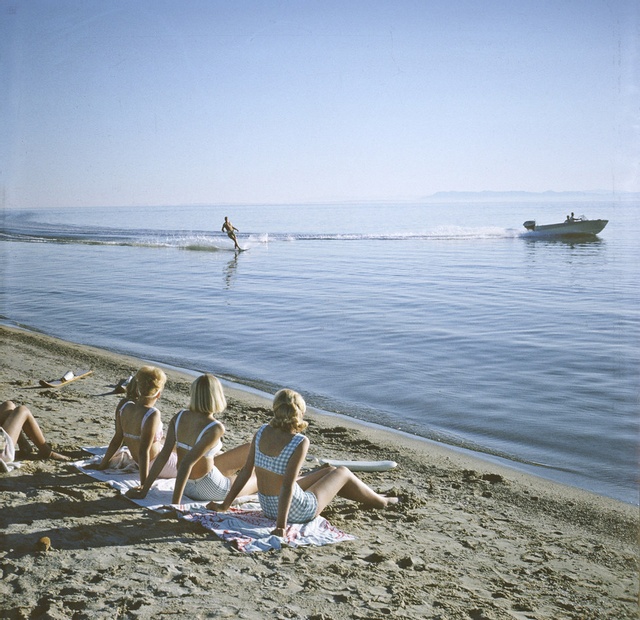 A former Los Angeles police officer said that while crossing a San Diego port of entry from Tijuana last summer, she was made to spread her legs as a female border agent penetrated her through her clothing. Later, she said, officers forced her to disrobe and squat as an agent shined a light at her genitals. Janine Bouey, 61, filed a sexual assault claim Wednesday. “If they’re doing this to a retired LAPD officer," she said, "they’re going to do this to a lot of people.” S.D. Union-Tribune | City News Service

In a remarkable public disclosure on Wednesday, Ojai's Thacher School, one of California's most exclusive private schools, acknowledged decades of allegations of sexual misconduct and harassment by faculty members. In the most serious case, an English teacher was accused of repeatedly raping a girl starting when she was 16 in the 1980s. Law enforcement is reviewing the evidence. L.A. Times | Newsweek

"The dynamics of the Birmingham Roller ... helped us to become gentle giants.”

Birmingham Roller pigeons are renowned for performing a bizarre aerial stunt: They will launch into a series of tight, backward somersaults. In California, the prized birds are bred by a community of Black men and boys in South Los Angeles who have been obsessed with them since the 1960s. Here's a terrific long read about how a subculture of pigeon fancying flourished among men longing for community and solace. 👉 Pipe Wrench 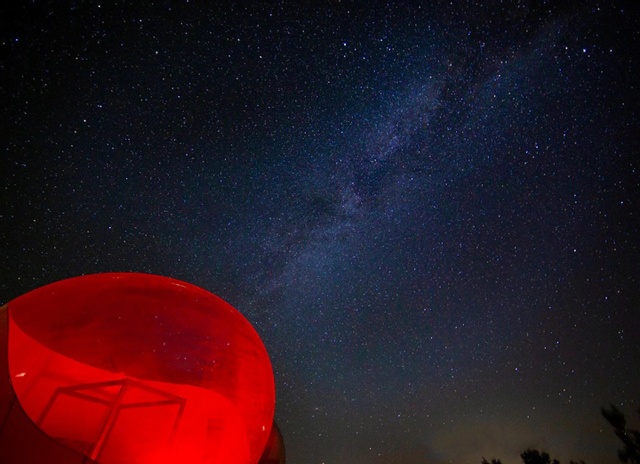 ☝️ Here's one way to take in the show when the perseid meteor shower makes its appearance in July and August. The "bubble tent" is nestled under the dark skies of Joshua Tree, a desert landscape that may be sweltering during summer afternoons but is perfect at night. Fodors included the rental in its list of the 10 most unique lodgings in California.