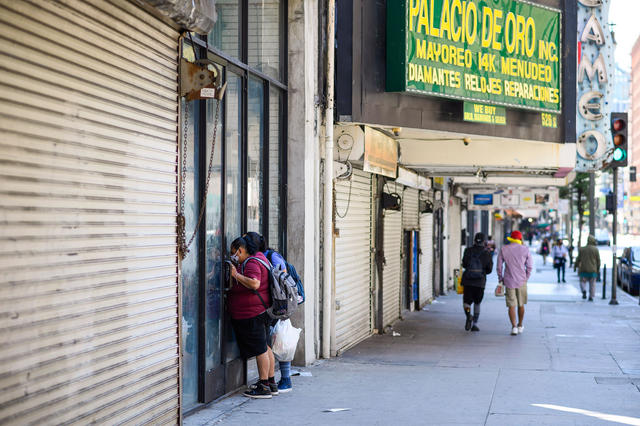 Two women peered into a closed store in downtown Los Angeles on Tuesday.

"There is a ray of optimism that this too shall pass."

After nearly a month of lives spent indoors, Gov. Gavin Newsom on Tuesday unveiled his outline for relaxing social distancing directives in California. While a specific timeline was not offered, he said that before we can begin to crawl back to normalcy, officials must be sure of six things:

Thermometers used commonly in public spaces. Restaurants with half as many tables. Ubiquitous face coverings.

Newsom predicted that he'll be able to answer the big question of when easing will start in two weeks if the state sees a continual decline in hospitalizations. But things won't be the same any time soon. "There's no light switch here," he said. "I would argue it's more like a dimmer." L.A. Times | S.F. Chronicle

President Trump appeared to back off of his claim that he has "total" authority to reopen states after his expansive view of presidential power was challenged by legal scholars and elected officials from both parties. "I'm not going to put any pressure on any governor to open," he said. Newsom offered only a subtle rebuke. "When it comes to reopening," he tweeted, "SCIENCE — not politics — must be California's guide." N.Y. Times | Politico

Polls have shown that Newsom isn't especially popular among Californians. But he's getting higher marks for his coronavirus response than just about any other governor. FiveThirtyEight 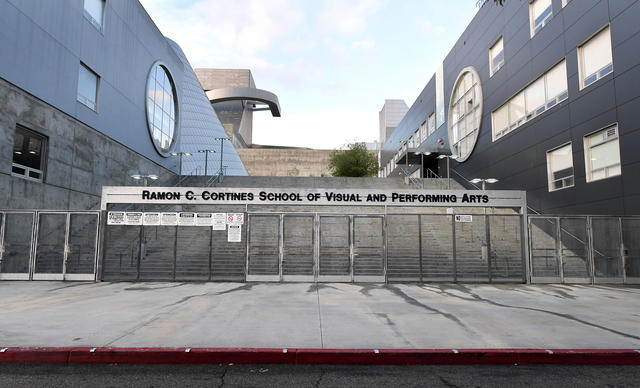 "We need to get our kids back to school."

Until Tuesday, it has not been a given that schools would resume in the fall. Newsom said conversations were underway about how students could return in a "physically constrained" way. That raised an eyebrow for at least one education leader: "With just the nature of schools, no matter what we put in place, we're talking about kids here," he said. "The notion of physically distancing is not going to go well." Politico | EdSource

"The state, despite its large, globe-traveling population, ranks 30th in the nation in coronavirus deaths per capita and has a fraction of the mortality rate that New York and New Jersey have suffered. As of Monday, San Francisco had recorded 15 deaths." To explain that, some experts are pointing to California features that have been regarded as liabilities: a solitary car culture, a dearth of public transportation, and suburban sprawl. N.Y. Times

Last week, a KSBW story that highlighted an unsubstantiated theory that the coronavirus was in California last fall was shared widely on social media and picked by outlets as varied as SFGate and RushLimbaugh.com. The Guardian checked in with an epidemiologist at Stanford, which has been studying the early spread of the virus. "I don't believe that," Dr. Yvonne Maldonado said of the fall claim, "and I don't have any evidence of that happening." The Guardian 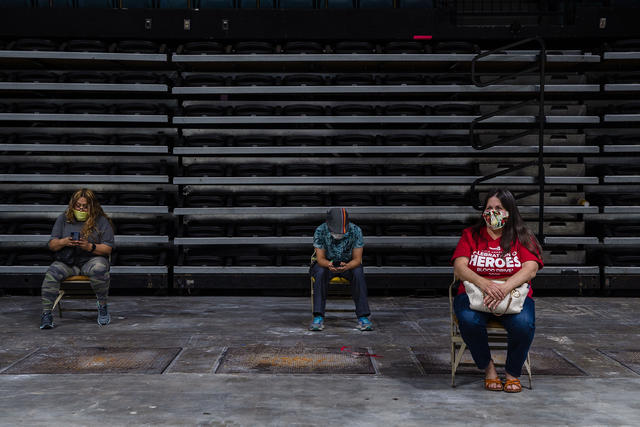 People waited to donate blood at Pechanga Arena in San Diego on Tuesday.

In the 24 hours that ended Tuesday morning, California reported 71 new deaths, a single-day high since the pandemic began. L.A. County, too, confirmed a record jump of 40 deaths. Here are the latest coronavirus totals, according to tallies by the S.F. Chronicle and N.Y. Times: 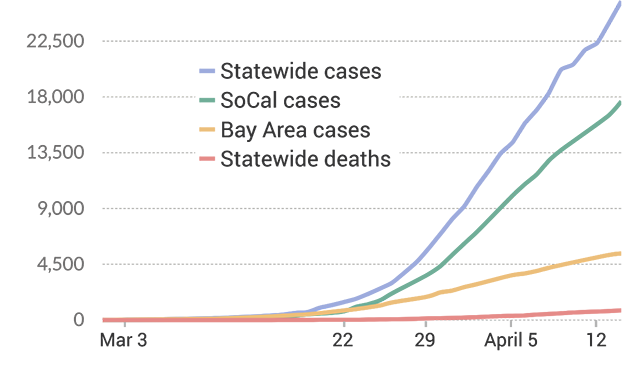 "It's more than about the money for us. It's about our life's work."

California farms have been plowing their crops back into the ground and dumping thousands of gallons of milk as demand from restaurants and schools has all but vanished. It's a bitter irony that as lines at food pantries are growing longer, farms can't afford to get their surplus to those who need it. Fresno Bee | S.F. Chronicle

When the 49ers blew a 10-point lead in the fourth quarter of the Super Bowl in February, it went down as a brutal loss. But medical experts told the Wall Street Journal that it may have been a blessing in disguise. The timing of a parade — with hugging, screaming fans — could have amounted to the perfect breeding ground as the coronavirus was beginning to spread. "It is certainly hard to imagine a more high-risk situation," one doctor said. Wall Street Journal | Sports Illustrated 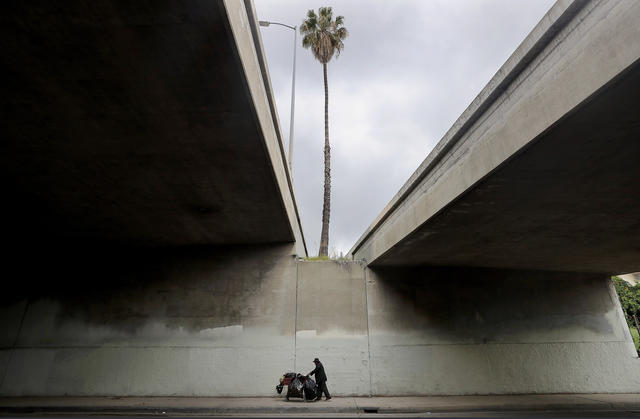 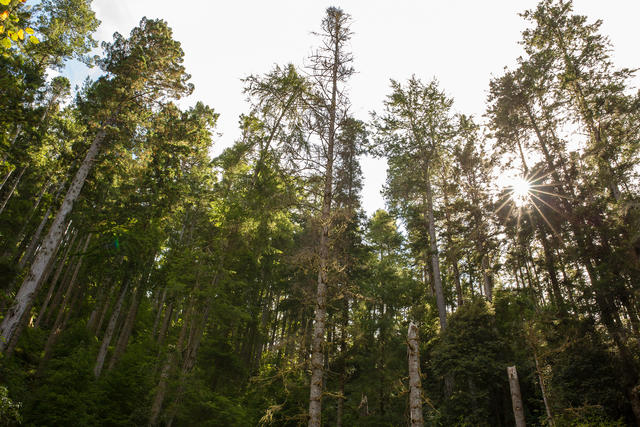 Seeking a simpler way of life, Charles Bello and his wife Vanna Rae bought 240 acres in the Mendocino redwoods in 1968. Price: $45,000. An architect who apprenticed under Richard Neutra, Bello is still there, now a widower and with his two grown sons moved away. He spends his days building wood sculptures and fanciful guest homes on the property. Here's a fascinating look at how one man found his calling in one of California's most beautiful and remote places (along with some gorgeous pictures). Outside magazine 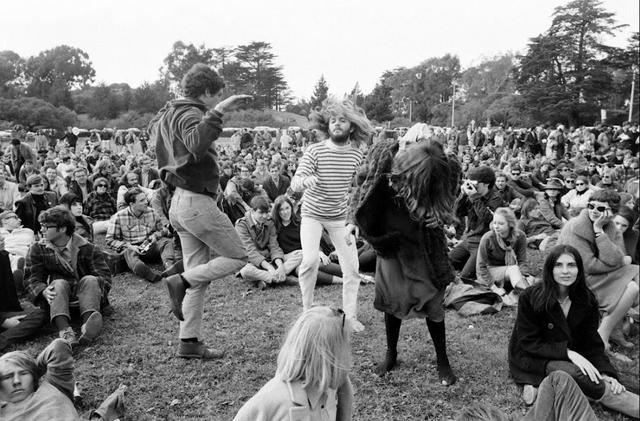 Hippies cut loose during the Spring Mobilization in San Francisco on April 15, 1967.

It was on this day in 1967 that roughly 50,000 people packed into San Francisco's Kezar Stadium in the largest protest march and rally the West Coast had ever seen.

The Spring Mobilization Committee to End the War in Vietnam, including a related protest in Manhattan's Central Park, was notable for melding together disparate civil rights, labor, and counterculture movements in opposition to the war.

In the winter and early spring of 1967, two events helped to forge the coalition. In January, 30,000 beatniks and hippies gathered for the Human Be-In festival in Golden Gate Park that set the stage for the Summer of Love. Then on April 4, Dr. Martin Luther King Jr. shocked the country by forcefully denouncing the Vietnam War for the first time.

At Kezar Stadium, filled nearly to capacity, activists, legislators, and union leaders spoke. The keynote was delivered by Coretta Scott King, wife of the civil rights leader, who linked the Vietnam War with deteriorating moral values at home. "Freedom and justice in America are bound together with freedom and justice in Vietnam," she said.

The war didn't end for another eight years. But historians have counted the 1967 protest as a catalyst for the efforts that would hasten its end. The spirit of the movement — "broad and diverse, peaceful and serious, direct and disorderly," as one participant described it — has echoed in the decades of protests held in San Francisco to this day.

Google Arts & Culture collected some fantastic photos from the Spring Mobilization in San Francisco by LIFE magazine's Ralph Crane. See nearly 200 of those images here. (Note: Many are miscaptioned as taking place April 17.)