California on Monday gave millions of state employees and healthcare workers a choice: Get vaccinated against Covid-19 or face weekly testing. The move is part of what appears to be a nationwide pivot toward vaccine mandates as people who refuse the shots drive a surge of needless sickness and death. Among those now demanding vaccinations: The Department of Veterans Affairs, a coalition of 500 San Francisco bars, hospitals across the country, and New York City, Pasadena, Long Beach, and San Francisco. “We’re at a point in this pandemic where an individual’s choice not to get vaccinated is now impacting the rest of us in a profound and devastating and deadly way,” Gov. Gavin Newsom said on Monday. Washington Post | Politico 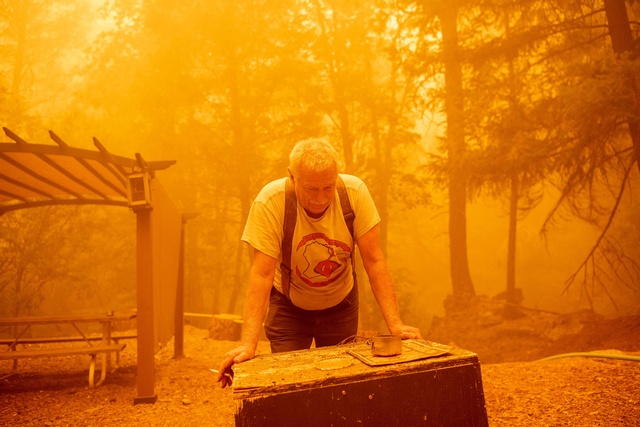 Jon Cappleman prepared to defend his home against the Dixie fire in Twain on Saturday.

Fire experts warned that a massive Northern California wildfire was poised to make another dangerous run this week as forecasts call for high temperatures and gusty winds. As of Monday, the Dixie fire, burning in Butte and Plumas counties, had grown to more than 300 square miles after a leap in size over the weekend, making it the 15th largest wildfire in California history. At least 16 homes and other structures were leveled in the mountain town of Indian Falls. Thousands more remained threatened. Mercury News | A.P.

See the moment a remote wildfire camera was engulfed in flames. 👉 @AlertWildfire 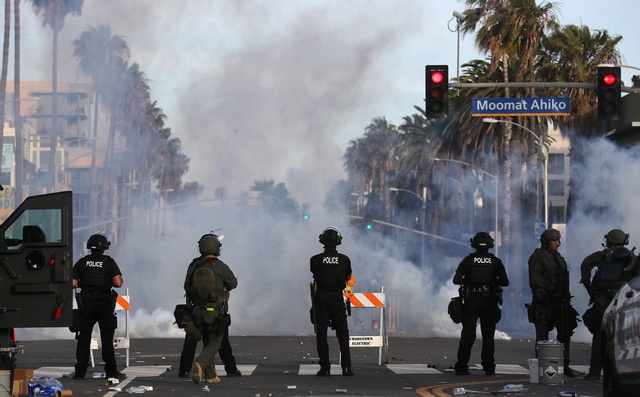 Police responded to demonstrations in Santa Monica on May 31, 2020.

California is one of only four states in the country that lack the power to decertify police officers. As a result, abusive cops have been allowed to bounce from job to job, even after serious misconduct. A bill that aims to change that is arguably the biggest criminal justice proposal this legislative session. But it's far from certain: Powerful police groups have raised a series of objections. CalMatters

For California transplants in Montana, conversations about where they come from can be touchy. Many locals are blunt about their dislike of Californians, whom they blame for driving up home prices and importing the politics of "Commiefornia," as some call it. Lauren Craigie, a tech worker who moved to Bozeman, said she skips the California part of her biography and just shares that she grew up in Connecticut. “Part of me is annoyed that [locals] even care," she said. "Why are they special for just being born here?" SFGate.com 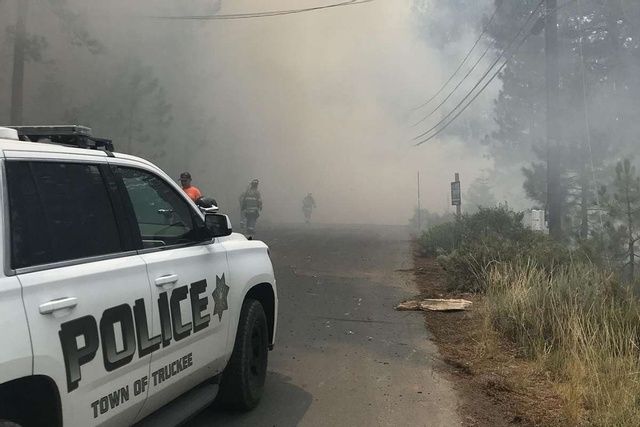 Emergency workers responded to a plane crash near Truckee on Monday.

A small business jet crashed on approach to the Truckee-Tahoe Airport on Monday, killing all three people on board, officials said. The Bombardier CL 600 aircraft slammed into a wooded area alongside a golf course, shaking nearby homes and sending a fireball 150 feet into the air, witnesses said. According to tower recordings, the pilot seemed calm. Minutes before the crash he told controllers, “Looking forward to seeing you guys.” Sacramento Bee | Modesto Bee

Former U.S. Senator Barbara Boxer, 80, was assaulted and robbed while walking near her home in the vicinity of Oakland's Jack London Square on Monday. In her telling, a young man jumped out of a car, shoved her "really, really hard," and grabbed her cell phone. Boxer stood there for a moment, shaking. “To me, it just brings home everything I’ve worked for,” Boxer said later. “We need good policing, we need community policing, we need a lot of it and we also need, absolutely, hope and opportunity for young people." L.A. Times

An hour before the attack, law enforcement officials gathered in Oakland to announce a tougher stance on crime. KTVU

Jessica: Oh, you must be awake… that’s cute.

Joshua: Jessica… Is it really you?

Eight years after his fiancee died of a rare liver disease at 23, Joshua Borbeau, still grieving, began texting with an artificial intelligence simulation of her. Intellectually, he understood it wasn't really his Jessica. But the simulation was really good and, as he said, "your emotions are not an intellectual thing.” S.F. Chronicle 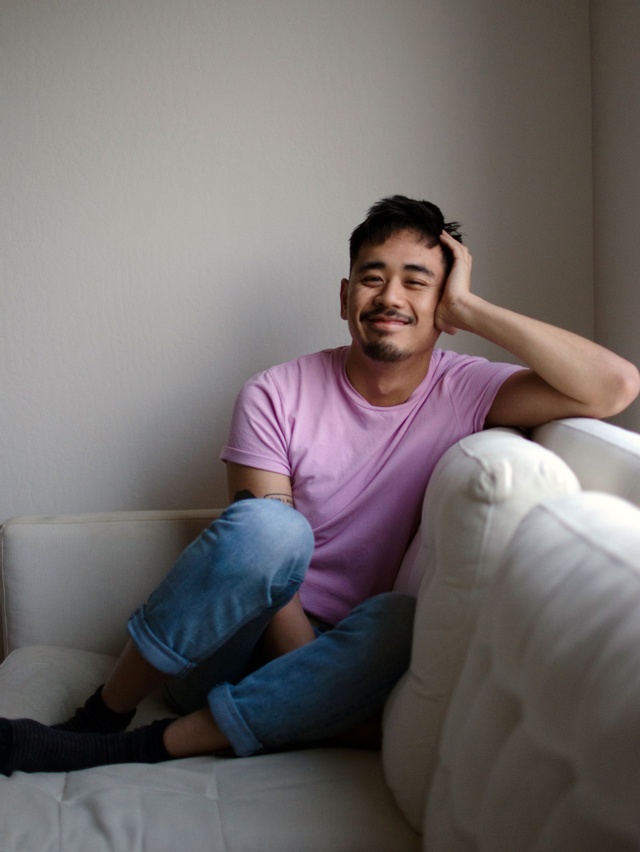 Anthony Veasna So, a son of Cambodian immigrants who grew up in Stockton, was on the brink of literary stardom when he died unexpectedly on Dec. 8 at his home in San Francisco. He was just 28. The N.Y. Times revealed this month that the cause was a drug overdose. Critics are now getting a look at So's debut book, “Afterparties,” due to be published in August. The New Yorker's Hua Hsu called it "remarkable," "transgressive," "devastating," and threaded throughout with "swaggering idealism and bitter humor." New Yorker | N.Y. Times

Officials identified a Kern County sheriff’s deputy killed in a weekend shootout as Phillip Campas, 35, a five-year veteran of the sheriff's office who left behind a wife and three children, ages 6, 9, and 13. Campas was met by gunfire as he responded to a hostage situation at a home in Wasco, a rural community northwest of Bakersfield. The dead, according to authorities, also included the 41-year-old gunman, two of his sons, ages 17 and 24, and their 42-year-old mother. Bakersfield Californian | A.P. 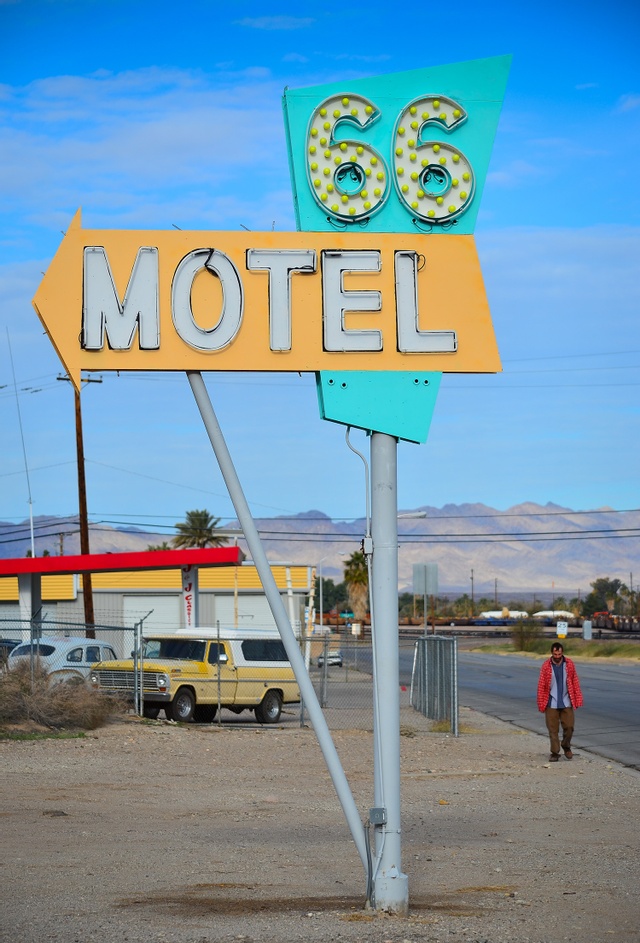 The taps could go dry in Needles.

In Needles, one of America's hottest cities and one of California's poorest, about 10 people a year die from the heat. Late last year, regulators ruled that two of the city's wells were unsafe. That left just one — running 23 hours a day to supply roughly 5,000 residents isolated deep within the Mojave Desert. “We are incredibly vulnerable,” said Rick Daniels, the city manager. “We are talking about life and death.” L.A. Times 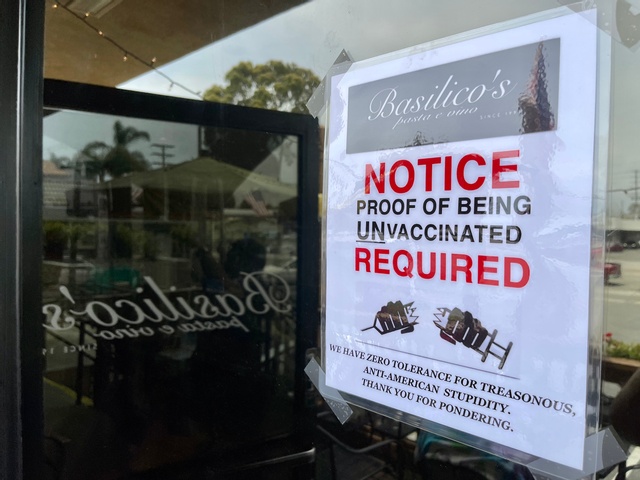 Signs at Basilico’s Pasta E Vino say only the unvaccinated will be served.

When California mandated masks indoors last year, Basilico’s Pasta E Vino responded by forbidding face coverings. Now the Italian restaurant in Huntington Beach has issued its latest decree: Patrons must show proof of being unvaccinated. In a Facebook post on Monday, Basilico’s said it was unfazed by a wave of harassment and one-star reviews over its stand. “We feel blessed to go into battle against all of you in defense of American liberty and freedom, so bring it on," it wrote in all caps. O.C. Register | L.A. Times 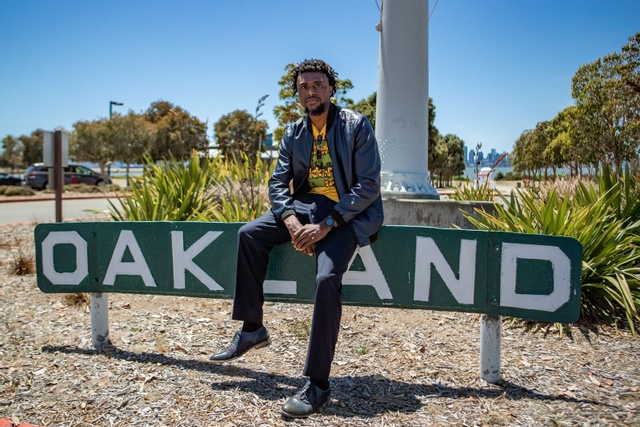 … Keenan Norris, an author and professor of creative writing at San Jose State. His latest novel, “The Confession of Copeland Cane,” was published last month.

A. Tio's Tacos in downtown Riverside. It's got some of the greatest found art ever to adorn a restaurant.

I recently discovered Machado de Assis' novel “The Posthumous Memoirs of Brás Cubas.” What a great book. The "Fall of Civilizations Podcast" created by the novelist Paul M.M. Cooper is phenomenal.

I live in the East Bay outside Oakland, but I teach at San Jose State, which is in the South Bay. Back-a-Yard is a great Caribbean restaurant in downtown San Jose.

Juana Maria, the Native woman upon whom “Island of the Blue Dolphins” was based; Charlotta Bass, the civil rights activist who ran the California Eagle newspaper for decades; and the floating apparition of Queen Calafia, whose legend gave our state its name.

I would ask Calafia about the Black women warriors, if they were real, and I would ask Juana Maria if the stories that the textbooks tell about her are real and, if not, what can be corrected. Then I would tell Bass about new media in all its forms and I would ask her and the whole table whether any of it can really give the voiceless a voice.

The last year was an upheaval for students and faculty across the world. In your creative writing classes, what struck you the most about how your students grappled on the page — directly or indirectly — with the pandemic, the protests, and the election chaos?

2020: Muy malo, mostly. Most of my creative writing students sought to avoid creative engagement with the harrowing moment. They're young people by and large, young people who are trying to write creatively oftentimes as a means of escape from all the enervating and terrifying things in life. They don't come to my class to be activists or journalists or social commentators, but to find whatever their idea of art is. It's difficult, I think, for them to come to terms with the way art is as bound up in our human mess as politics and relationships and all that other stuff.