California Democrats are trying to restore affirmative action after nearly 25 years. The state Assembly overwhelmingly approved a measure on Wednesday that would put the question on the November ballot. Preferential treatment on the basis of race or sex has been prohibited in public education and employment since 1996, when 55 percent of California voters approved Proposition 209. A.P. | Sacramento Bee 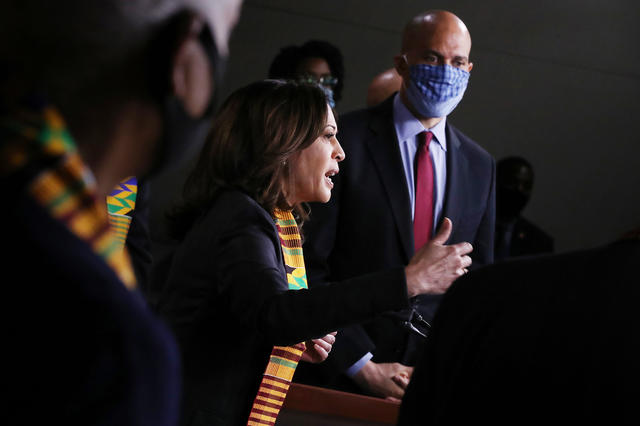 She's passionately defended an anti-lynching bill, warned that America has failed to fully contend with its history of racism, and clapped along with protesters near the White House chanting “Hands up! Don’t shoot!" Sen. Kamala Harris is seizing the spotlight in the national police reform debate, making her now a strong favorite among Democrats to become Joe Biden's running mate. “I think that she absolutely checks all the boxes,” one lawmaker said. Washington Post | Newsweek

Several California mayors participating in an online forum on Wednesday pushed back against calls to defund police departments. Oakland Mayor Libby Schaaf: “While many are understandably articulating a fear of police, a sense that they do not create safety, we also have people that know that the police have saved their lives, have prevented crime.” A.P.

A giant mass of protesters marched to Schaaf's house on Wednesday. Here's a dramatic video. @joenewsman/Twitter 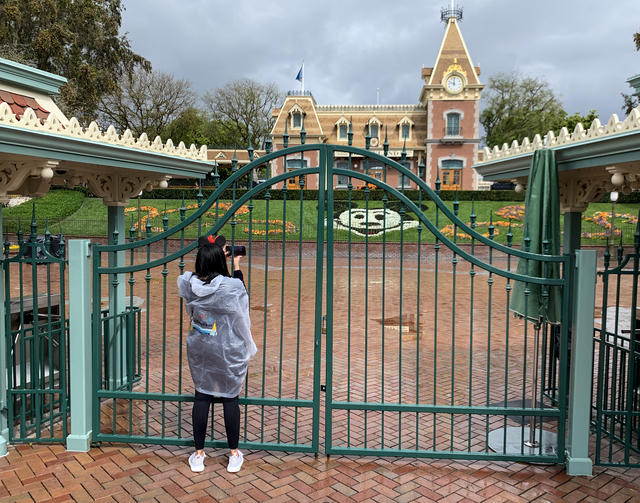 Disneyland was shuttered in March due to the coronavirus outbreak.

Disneyland announced its planned reopening date: July 17. A linchpin of Orange County's economy, the theme park has been closed since mid-March, costing the company billions in lost revenue and forcing furloughs for roughly 100,000 workers. Disney said it would ramp up slowly, with limited capacity. O.C. Register | Hollywood Reporter

On June 1, a group of aspiring young entrepreneurs, most of them African American, took a walk through an upscale suburb of Sacramento. The idea was to inspire big dreams, but some residents spied the group from their windows and posted frantic messages on social media identifying them as rioters. “This is not a joke," one read. "They are currently in my nieces neighborhood. Where are all my Second Amendment Peeps at??" Sacramento Bee 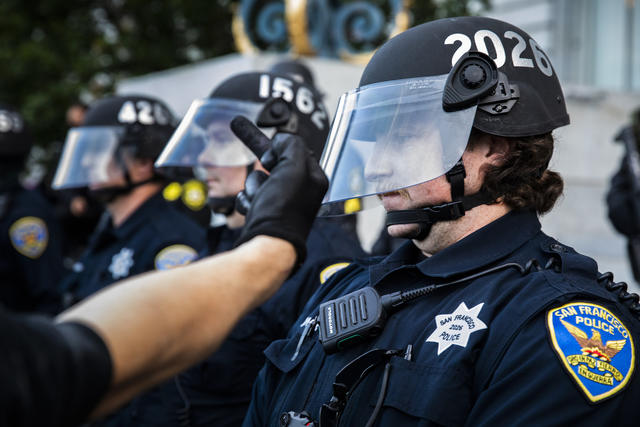 A demonstrator taunted a police officer during a protest in San Francisco on May 31.

On Tuesday, San Francisco's public bus system announced on Twitter that it would no longer transport police officers to anti-police brutality protests. The next day, the city's police union responded: "Hey Muni, lose our number next time you need officers for fare evasion enforcement or removing problem passengers from your buses and trains." S.F. Chronicle | SFist

A quiet set of workers in Silicon Valley has emerged that wouldn't work at Facebook under any circumstances. They are "Never Facebookers," but fear of being blacklisted keeps them from saying so openly, a reporter found. "There’s real fear about retaliation in Silicon Valley, which is still a small town despite its global conquest. Nobody wants to piss off the wrong founders, or venture capitalists, or even the upwardly mobile equity engineers who might later open doors for them." The Atlantic 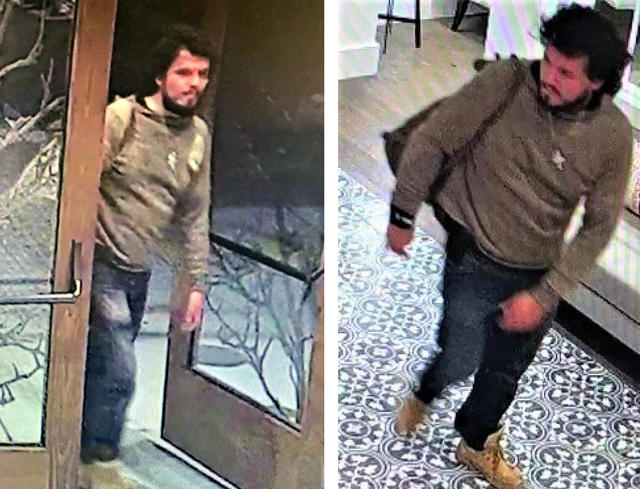 Officials released these images of a suspect in a shooting in Paso Robles.

A gunman opened fire at a police station in Paso Robles on Wednesday, striking a sheriff's deputy in the head. The deputy survived in serious but stable condition. Hours later, a homeless man was found fatally shot near a train station. Officials believe the shootings are linked. A manhunt was underway for Mason James Lira, 26, a transient from the Monterey area who is considered armed and dangerous. The Tribune | A.P.

An analysis of nearly 130 records from San Diego police departments dating back to 2001 showed that when officers use force, they are more likely to fire their weapon if the suspect is a person of color. "I think, quite frankly, that many police officers have a fear of black males," a criminal justice expert said. KPBS

An L.A. Times project catalogued 886 killings by police since 2000. Almost all of them were men. Nearly 80 percent were black or Latino.

“E.T.: The Extra Terrestrial,” the Spielberg classic filmed in 1980s Californian suburbia, debuted on this day in 1982.

Fun fact: M&Ms passed up the chance to be the candy that lures the lovable alien from the bushes in a memorable scene from the movie. The screenplay called for the colorful chocolate candies, but the M&Ms maker was said to have misgivings about associating its brand with an alien adopted by a lonely kid. So the producers approached the makers of Reese's Pieces, then a little-known confection. They agreed, crossing their fingers. "E.T." became the highest-grossing film of all time and Reese's Pieces rocketed into the public consciousness in what's been deemed one of the most successful product placements of all time. People | Snopes

As California emerges from its Covid-19 lockdown, the Sun is curating recommendations from outdoor writers of their top 5 not-to-be-missed destinations in each of nine California regions.

Next up: Travel writer Ann Marie Brown names her favorite places in the Eastern Sierra region. (See past recommendations for the far north and Central Valley). 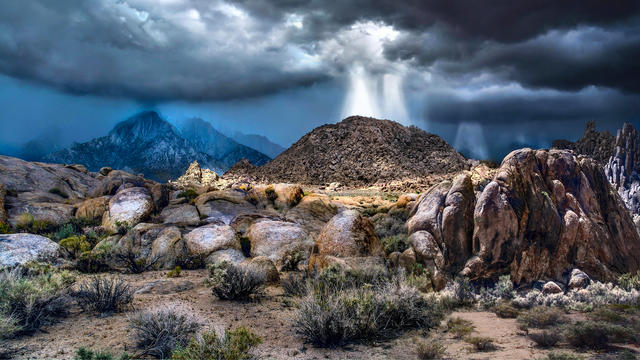 The rounded rock formations of the Alabama Hills form a contrast with the jagged Sierra. 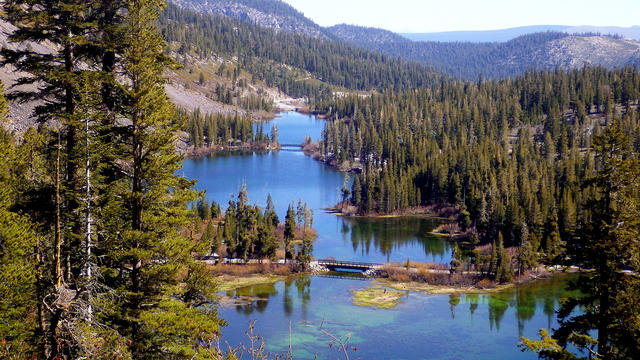 Mammoth Lakes Basin is a wonderland of majestic peaks and shimmering lakes.

Surrounded by some of the West's highest summits, Mammoth Lakes is a high-alpine town beloved by mountain lovers who shred the slopes of Mammoth Ski Resort in winter. When the snow melts, the fun switches over to hiking and mountain biking, camping in aspen groves, fishing for rainbow trout, and dipping into local hot springs. Five sparkling lakes are easily reached by car, plus dozens more on foot. 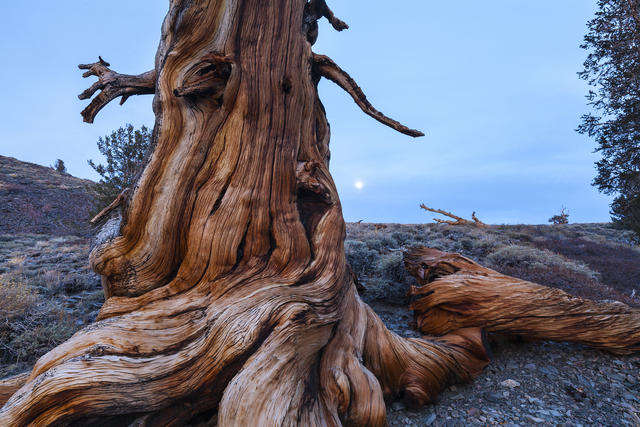 The fiercely durable wood of bristlecone pines erodes like stone against the elements.

The White-Inyo Mountains east of Bishop are home to ancient bristlecone pines, the world's oldest living trees. Their gnarled, contorted trunks cling to arid slopes at 10,000 feet and higher, where they're up against some of North America's harshest conditions—alkaline soil, high winds, and bitter cold winters. Many of these pines were seedlings when the Egyptian pyramids were under construction. A few short hiking trails lead through groves of the venerable trees. 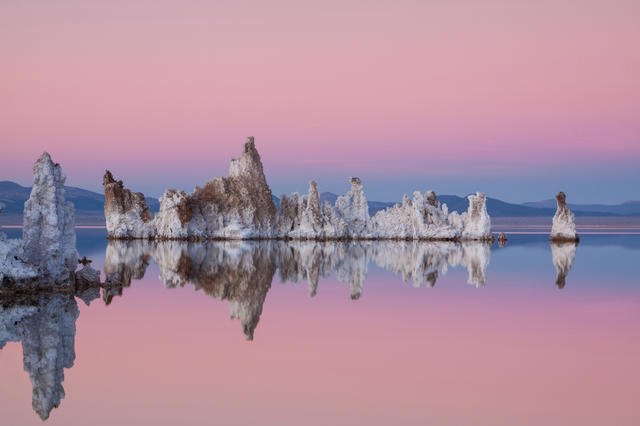 The tufa towers of Mono Lake look like they sprang from the mind of Dr. Seuss.

In the town of Lee Vining lies one of North America's most ancient lakes. Dating back about 800,000 years, Mono Lake is three times saltier and 80 times more alkaline than the ocean. The southwestern shoreline of the 70-square-mile lake is a favorite spot for photographers hoping to catch a big-sky sunset and kayakers and canoers who paddle around Mono's strangely beautiful tufa towers and formations. Visit in late summer or fall and you'll see birds numbering in the thousands, including Wilson's and red-necked phalaropes, eared grebes, and California gulls. 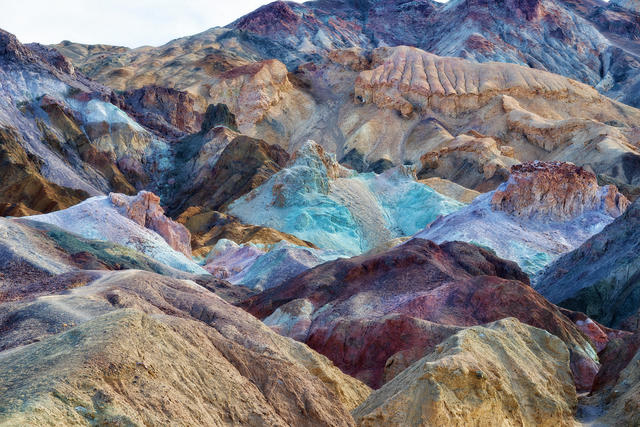 The largest U.S. national park outside of Alaska, Death Valley's 5,000 square miles are known for delivering on extremes. This is America's hottest and driest place, with summer temperatures peaking above 120 degrees Fahrenheit and rainfall averaging less than 2 inches per year. You have to be a little crazy to visit from June to September, but the rest of the year, Death Valley offers mild weather and a chance to explore soaring sand dunes, below-sea-level salt flats, and colorful sandstone canyons.

Ann Marie Brown is the author of 14 California travel books, including guides to Tahoe, Yosemite, the Bay Area, and more. Check them out at her website.