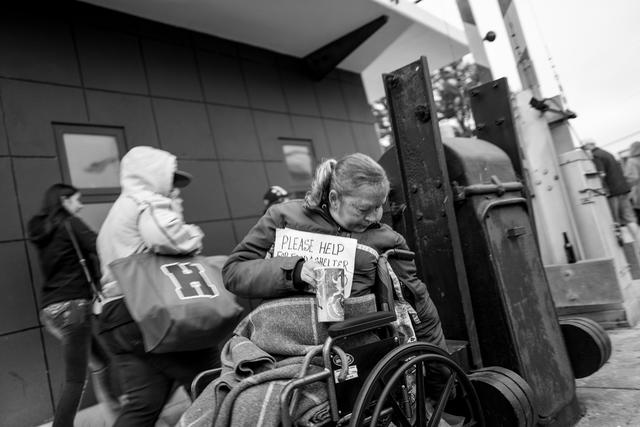 A homeless woman in San Francisco, where the crisis on the streets has intensified.

In a Page 1 story, the N.Y. Times examined California's rising hostility toward people living on the street amid an ever-expanding homelessness crisis. Boulders, fences, and prickly plants have been installed to deter people from sleeping on sidewalks. A property developer proposed luring homeless people onto buses stocked with alcohol and driving them to Mexico. "I think they care more about animals than us," a homeless woman in Los Angeles said. "They're making parks for dogs but they're not building housing for us." N.Y. Times

Income classes are pulling further apart in California, an analysis showed. For households in the bottom 20 percent, incomes dropped about 5.3 percent between 2006 and 2018. The top 5 percent of households? Up 18.6 percent. Mercury News | NBC Bay Area

The chief judge of the Eastern District of California warned the court's workload had become so extreme that some civil jury trials will "cease to exist" and some criminal cases will have to be dismissed. In a letter addressed to the White House and Sens. Dianne Feinstein and Kamala Harris, Judge Lawrence O'Neill said a failure to urgently fill vacancies would lead to a "judicial catastrophe." He added: "The statement sounds serious and ominous. It is both. It may also sound like an exaggeration. It is not." Fresno Bee | HuffPost 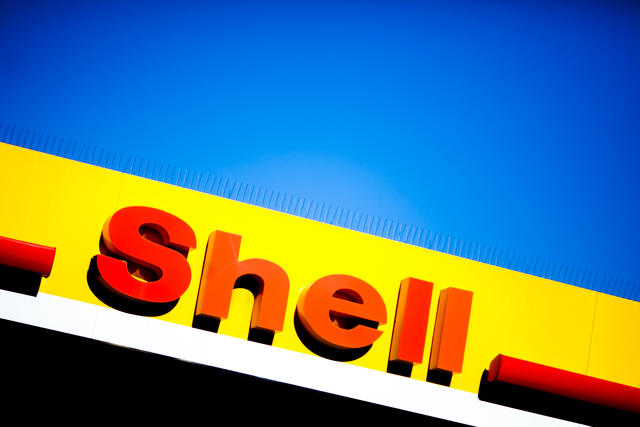 Name-brand retailers say they charge more because their gas is higher quality. But that's unclear.

Gov. Gavin Newsom asked the attorney general to investigate whether oil companies are cheating gas customers, pointing to a new report that suggests customers are being overcharged by as much as $1 a gallon. Even after accounting for taxes and other production factors, Californians paid an additional $11.6 billion at the pump over the last five years, the analysis found. "There is no identifiable evidence to justify these premium prices," Newsom wrote. A.P. | Sacramento Bee

Four more parents, all from California, pleaded guilty in the college admissions scandal, buckling as prosecutors threatened to file additional charges. The parents admitted to paying hundreds of thousands of dollars each in bribes to get their children into various schools, including USC. Prosecutors said one mother, from Atherton, paid to have answers fed to her daughter during an SAT exam, then "gloated" with the girl about getting away with it. Mercury News | A.P.

Lori Loughlin's daughters are no longer enrolled at USC, the school said. Loughlin and her husband have pleaded not guilty in the admissions scam. CNN | USA Today

Tuluwat in Humboldt Bay was sold to a dairy farmer without the tribe's consent in the 1800s.

The Wiyot tribe was driven from a small island in Humboldt Bay in 1860 after white settlers slaughtered more than 200 of its members. On Monday, nearly 160 years later, the island of Tuluwat was handed back to the Wiyot people in an emotional standing-room-only ceremony at a community center in Eureka. A former mayor delivered an apology. Tribal members sang a song of "returning home." "Today is a good day to be alive," the Wiyot tribal chairman said. Lost Coast Outpost | Times-Standard

PG&E said it might shut off power to more than 200,000 homes and businesses across 16 counties, mostly in the Sierra foothills and north of San Francisco, as forecasts called for dry, windy conditions on Wednesday and Thursday. The announcement comes just two weeks after the largest planned blackout in state history. "We are really dealing with a new reality here," PG&E Chief Executive Bill Johnson told the Wall Street Journal. "It is certainly not a tool we like to use." S.F. Chronicle | Bloomberg

Here's a map of the proposed outage area, and a list of potentially affected cities.

Marybel Batjer is California's new top regulator overseeing utilities — and she's not to be trifled with, according to columnist George Skelton. "They don't come much better in government," he wrote. L.A. Times 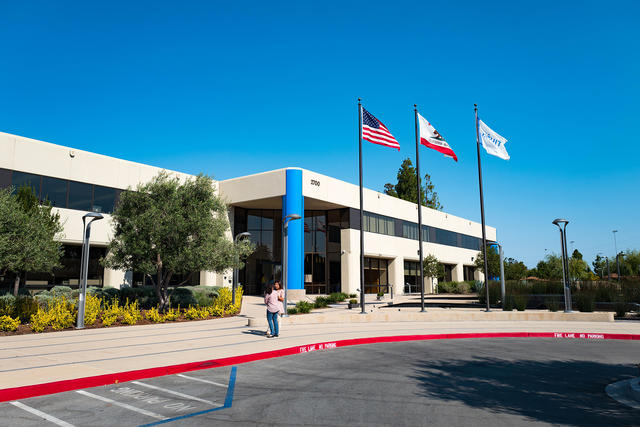 For two decades, Intuit, the Mountain View company that produces TurboTax, used a battalion of lobbyists, the revolving door, and "dark pattern" customer tricks to prevent the U.S. government from making tax filing simple and free. The result: a multibillion-dollar franchise built on software designed to deceive taxpayers. ProPublica

After years of lobbying and negotiation, Major League Soccer officially awarded its 29th franchise to Sacramento. California is now the only state in the nation with four MLS clubs. "Soccer has gotten to a point now where I think you hit the turning point, where I think it's going to be one of the top two or three sports in America," an investor in the Sacramento team said. "And this was a chance for us to be part of that growth." Sacramento Bee | A.P.

Ahjumawi Lava Springs State Park, 40 miles east of Mount Shasta, is one of the least-visited state parks in California — but that's only because you have to use a boat to get there. Beauty abounds. There's fascinating volcanic geology, aqua-colored bays, and tiny forested islets. Bald eagles and ospreys nest in the juniper trees. And perhaps best of all: Very few people. The S.F. Chronicle included it in a list of 10 lesser-known state parks. S.F. Chronicle | Parks.ca.gov 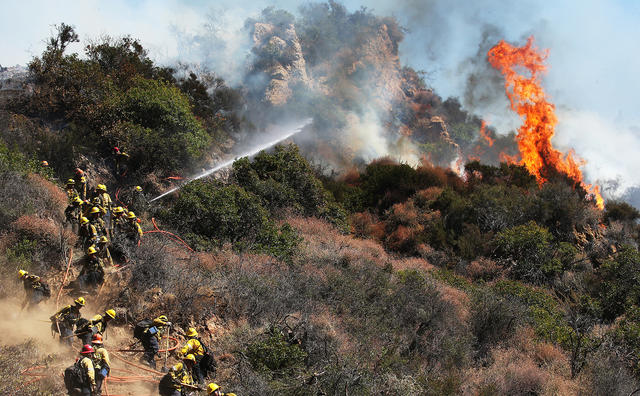 Aerial video captured dramatic images of residents fleeing as flames raced up a hillside in the Pacific Palisades neighborhood in Los Angeles. KTLA/Twitter

Mandatory evacuations were ordered for about 200 homes on Monday as the wildfire chewed through about 40 acres, burning near multimillion-dollar homes. Evacuations were lifted by nighttime. L.A. Times | LAist

California's legalization of recreational marijuana was supposed to bring illegal grows out from the shadows. In southern Riverside County, they've been expanding. Unlawful grows are now so prolific that the sheriff uses a hashtag for weekly raids: #marijuanamonday. That's because zoning rules have made it impossible for small-scale, legacy growers to operate, a grower said. "It's essentially total exclusion," he said. Desert Sun

A chain of Orange County residential care homes paid workers as little as $4 an hour, made them work more than 87 hours a week, and intimidated them against speaking out, a federal lawsuit said. In a settlement, the owners agreed to $1.1 million in back wages to dozens of workers. California's labor secretary said such cases are "not uncommon." Employers pay flat rates for round-the-clock work, resulting in "egregious violations" of wage laws, she said. L.A. Times | O.C. Register 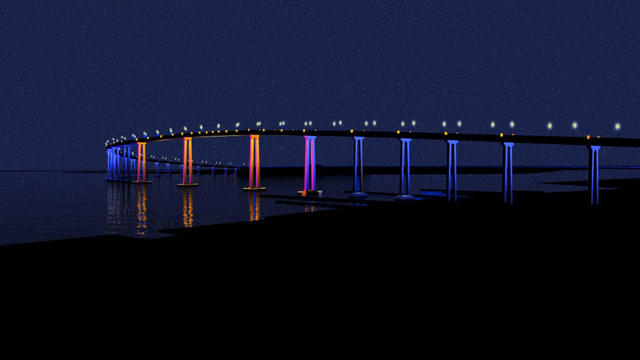 Officials are testing a plan to illuminate the two-mile-long Coronado Bridge.

Opened in 1969, the Coronado Bridge eased travel across San Diego Bay and created an instant landmark with its graceful sweep and blue coloring. Fifty years later, it's slated for a significant update. A project is advancing to add multicolored LED lighting to the bridge's piers. One idea: use red, white, and blue as Navy ships pass by. NBC San Diego | PortofSanDiego.org

When it comes to beautiful bridges, few places compare to California. Here's an online tour. California Through My Lens 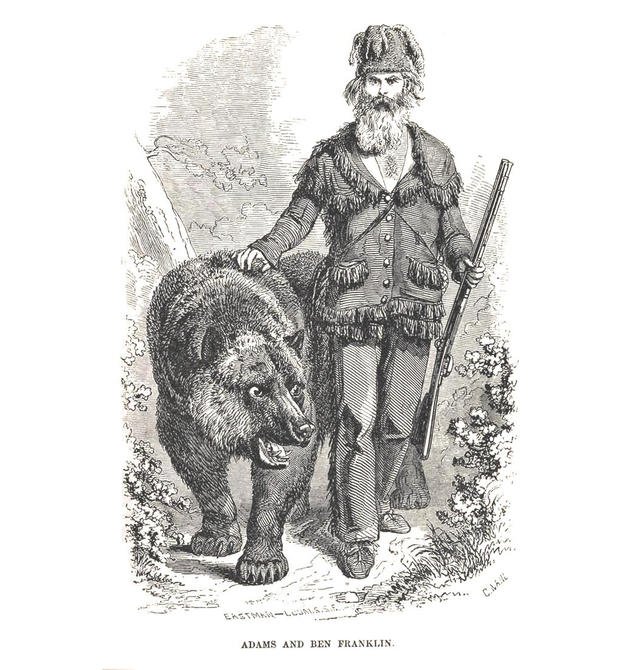 A depiction of Grizzly Adams and Ben Franklin from the 1860 Hutchings’ Illustrated California Magazine.

Grizzly Adams was a real person, and he was said to be born on this day in 1812. Born John Adams, he was a member of the Adams family of New England that produced two American presidents. He worked as a shoemaker for a number of years before deciding to escape the dullnes of polite society, setting off for the Wild West. In 1852, he settled at a camp near Yosemite "to make the wilderness my home, and the wild beasts my companions."

The legend of the fearless frontiersman, in a deerskin cap and snow-white beard, grew in newspaper articles and a book by a San Francisco journalist.

According to the lore, Adams made a hobby of collecting animals, including several grizzlies. Bears he captured as cubs treated him as family. A grizzly he called Lady Washington let him ride on her back. Another named Ben Franklin accompanied him on hunting voyages. 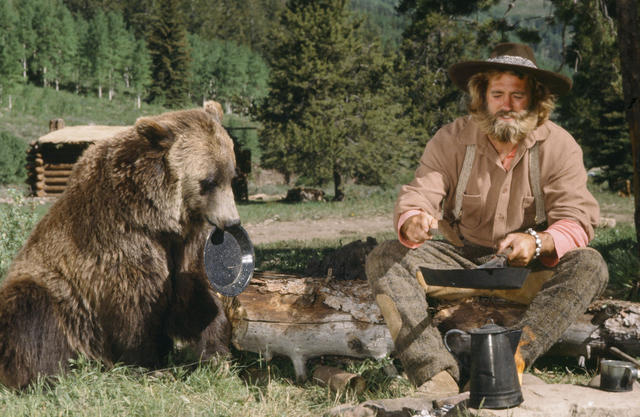 A 1970s television series, “The Life and Times of Grizzly Adams,” was inspired by the mountain man.

In 1855, he was said to be hunting with Ben Franklin and his dog Rambler when a large female grizzly attacked, slapping away Adams's gun and peeling away his scalp. His animal companions intervened, allowing Adams to recover his weapon and retreat up a tree. He laid back his scalp, wiped the blood from his eyes, and shot the attacker in the heart, finishing her off with a half dozen knife strikes.

Adams later brought his managerie of animals — including grizzlies, elk, a lion, and a tiger — to San Francisco, where he became a showman. He accompanied P.T. Barnum on a tour of the East Coast. But his injuries caught up with him. The head wound he suffered in the mountains never fully healed, leaving a dent in his skull. In 1860, a monkey he was training purportedly bit into the wound, penetrating his brain.

Several months later while on his death bed, Adams sent for a clergyman. Untutored yet eloquent, he told the man of God that he had attended sermons every day. "Sometimes an old grizzly gave me the sermon," he said, "sometimes it was a panther; often it was the thunder and lightning, or the hurricane on the peaks of the Sierra Nevada, or in the gorges of the Rocky Mountains; but whatever preached to me, it always taught me the majesty of the Creator." Legends of America | CoCoHistory.org

Among the popular pastimes of 19th-century California were fights to the death between grizzly bears and bulls staged as Sunday entertainment for the after-church crowd. California Sun

An earlier version of this newsletter misstated how many years have passed since the opening of the Coronado Bridge. It's been 50 years, not 60.