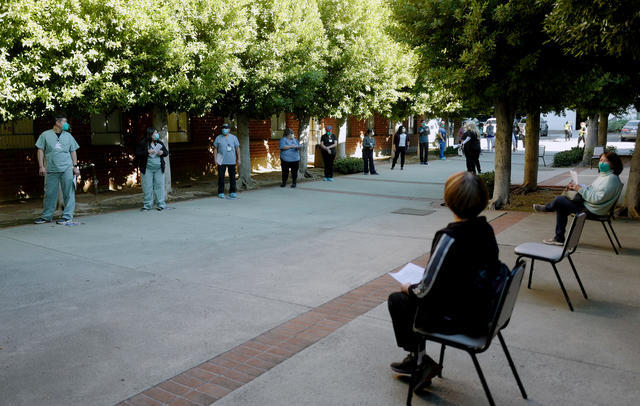 Health care workers waited to be vaccinated at at Whittier Hospital Medical Center on Dec. 16.

California's vaccine distribution has been one of the slowest efforts among U.S. states. As of Monday, according to figures from Bloomberg's vaccine tracker, the state had administered just 24% of the roughly 1.9 million doses it has on hand. Texas, by contrast, was at 41%. In some cases, hospitals got more doses than people available to take them. Speaking Monday, Gov. Gavin Newsom acknowledged that the state needed to do better, saying he would propose an infusion of $300 million to speed up the process. A.P. | S.F. Chronicle

Hospitals in Los Angeles County have become so strained that they're telling ambulance crews to cut back their use of oxygen and keep away patients with little chance of survival. Sick patients who would normally be allowed to stay in the hospital for observation are being rapidly discharged. “Many hospitals have reached a point of crisis and are having to make very tough decisions about patient care,” a county health official said. L.A. Times

A group of anti-maskers stormed a grocery store and mall in Los Angeles on Sunday, arguing with customers and employees in a fracas captured on video. At one point, a woman who identified as a doctor angrily told the protesters that her father was in the hospital with Covid-19. "People die," a man yelled back. "Your father’s not special.” It's appalling to watch. L.A. Times | KABC 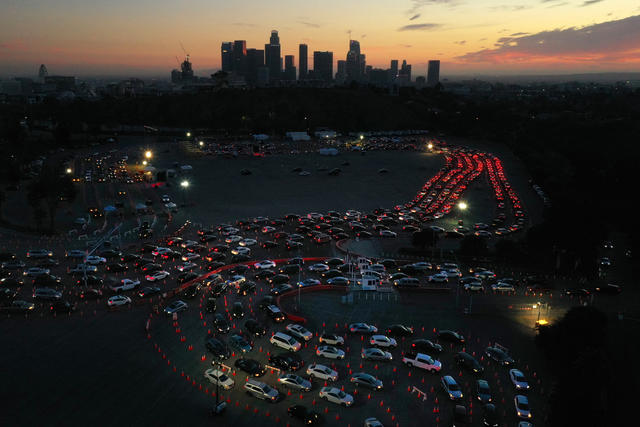 Vehicles lined up at a Covid-19 testing site at Dodger Stadium on Monday.

San Francisco's district attorney, Chesa Boudin, is facing intense criticism after a motorist plowed a stolen car through a red light in the city's downtown on New Year’s Eve, killing two pedestrians. Officials said the suspect, Troy Ramon McAlister, was drunk. McAlister, a parolee, had remained free despite several recent arrests for crimes that Boudin, a reformer who vowed to prioritize rehabilitation over punishment, declined to prosecute. S.F. Chronicle | SFGate.com 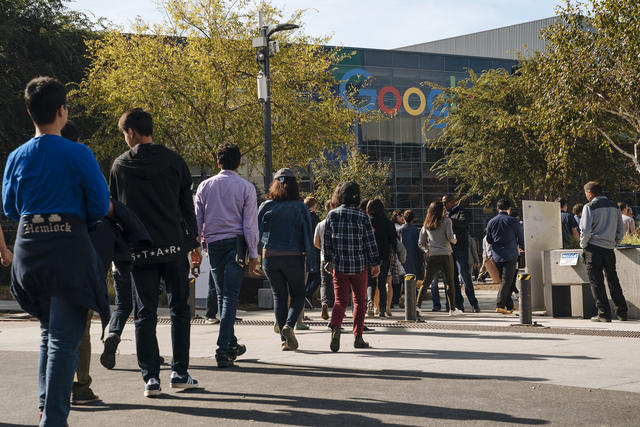 Google employees held a walkout in Mountain View on Nov. 1, 2018.

Employees of Google formed a union, a highly unusual move in Silicon Valley that escalates a conflict with management over the direction of the internet giant. Prior to the announcement, just 200 or so workers had signed up to join, the group said. In a N.Y. Times op-ed, two engineers spearheading the effort said Google bosses had collaborated with repressive governments, developed artificial intelligence for the Pentagon, and profited from ads by hate groups. "We’d had enough," they wrote. N.Y. Times | Bloomberg

Albertsons is eliminating its fleet of unionized delivery drivers and turning instead to a third-party service that uses independent contractors, reports said. The move is one of the first signs of the effects of Proposition 22, which exempts gig economy companies from treating their drivers as employees. News of the development brought calls for a boycott on social media. Knock.LA | MarketWatch 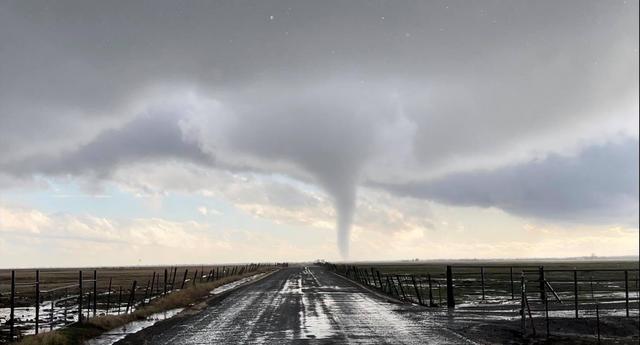 A tornado touched down north of Chico on Monday.

Two rare tornados touched down in the Sacramento Valley about 15 miles outside of Chico on Monday afternoon. One knocked down a large oak tree, but damage was otherwise minimal. California has only experienced about 40 tornadoes in the past decade. Chico Enterprise-Record | S.F. Chronicle 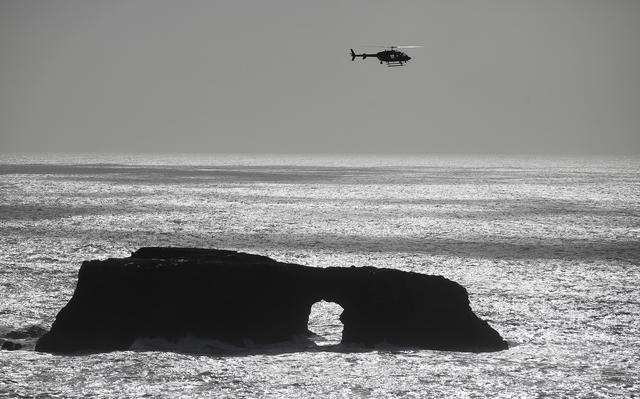 A helicopter searched Monday for two missing children who were swept into the water at Blind Beach.

A Petaluma woman was mourning the loss of her entire immediate family after a powerful wave slammed into them during an outing to the Sonoma Coast on Sunday. Officials said the children, a boy and a girl aged 4 and 7, were swept into the water and the father, Michael Wyman, 40, went in after them. His body was pulled from the surf. After two days of searching, the kids remained missing. Press Democrat | USA Today

The Federal Emergency Management Agency calculated the risk level of every county in America for 18 types of natural disasters, such as earthquakes, hurricanes, and tsunamis. Of more than 3,000 counties assessed, Los Angeles County came in at No. 1. Also in the top 10: Riverside and San Bernardino counties. A.P. | City News Service 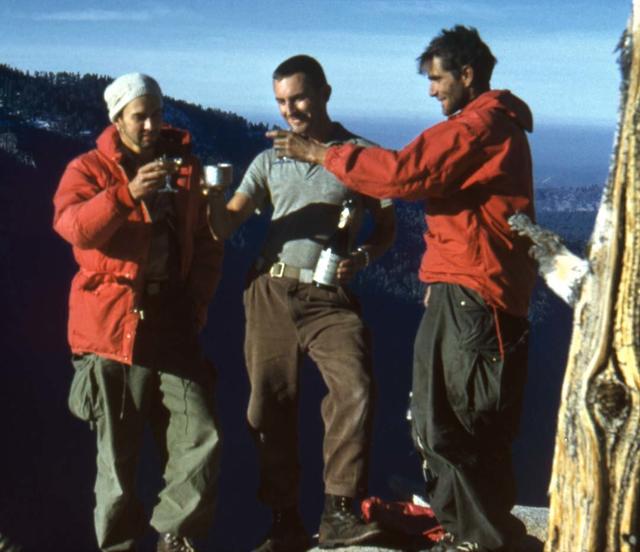 George Whitmore died on New Year’s Day. The legendary Yosemite climber was part of the first team to summit El Capitan in 1958, a time when many considered the 3,000-foot granite wall unclimbable. Whitmore later became an ardent conservationist, work that he said lent his life far more meaning than any climbing exploit. The cause of death was the coronavirus. He was 89. Fresno Bee | A.P.

An object resembling a man in a jetpack flew off Palos Verdes on Dec. 21.

Pilots on an instructional flight off the Southern California coast think they may have spotted the fabled LAX jetpack man — and they captured the encounter on video. The mysterious entity was flying at roughly 3,000 feet, an unlikely proposition given the limits of jetpack technology. Another theory: It was a mannequin attached to a drone. FAA and FBI investigations into the matter are ongoing. Mashable | The Drive