Gov. Gavin Newsom and legislative leaders agreed to mandate that every public school district in the state offer a remote learning option this fall, even as schools fully reopen. The directive is an acknowledgement that many parents still harbor worries over transmission of Covid-19 in the classroom. “There needs to be an alternative for this year, and it needs to be better than what we did before,” said Shelly Spiegel-Coleman, an education advocate. EdSource | KQED 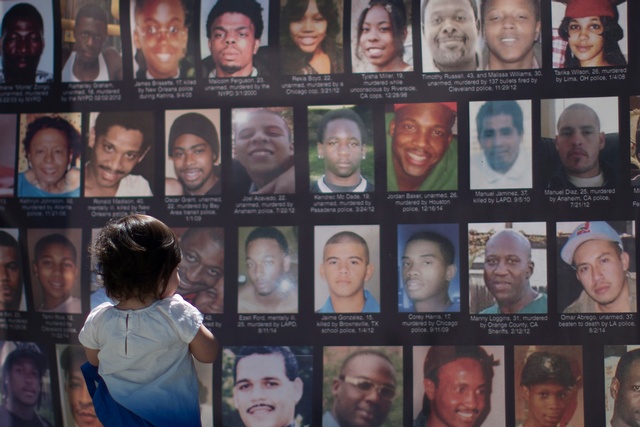 A banner showed pictures of alleged police shooting victims during a rally in Los Angeles in 2015.

In the past, inquiries into police shootings of unarmed civilians have been handled by local police agencies. A new law now shifts responsibility for those cases to state Attorney General Rob Bonta's office under the premise that it would be removed from local pressures. Bonta said two teams — one in Northern California and the other in Southern California — will investigate 40 to 50 cases a year based on historic trends. "The final charging decisions will be up to this office, and nobody else," he said. A.P. | L.A. Times

The California Capitol reinstated a mandatory mask rule after a coronavirus outbreak spread to at least nine legislative staffers, four of whom were fully vaccinated. The state Senate and Assembly have reported full vaccination rates of at least 84% among their staff members. Breakthrough cases are very rare, making the four Capitol cases jarring. Statewide, just 0.043% of vaccinated Californians were diagnosed with infections between Jan. 1 and June 30. Sacramento Bee | A.P. 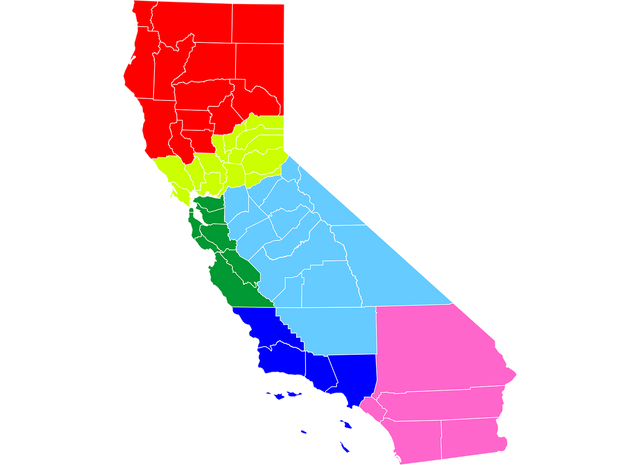 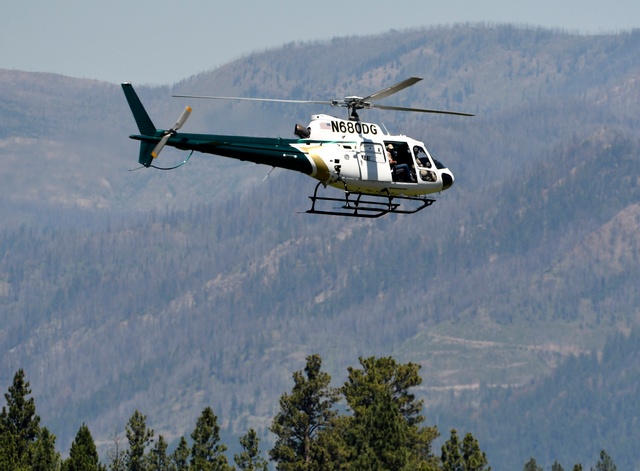 A helicopter from Montana Fish, Wildlife and Parks searched Wednesday for a bear that killed a camper.

A Chico woman was killed by a grizzly bear while camping in a small Montana town on Tuesday. Wildlife officials said the approximately 400-pound grizzly pulled Leah Davis Lokan, 65, from her tent in the middle of the night. Two fellow campers used bear spray to drive the animal off, but it was too late. Lokan, a registered nurse and avid cyclist, was in Montana as part of a long-distance bike trip. Chico Enterprise-Record | The Missoulian

The Bay Area, home to roughly 8 million people, recorded zero coronavirus deaths Sunday through Tuesday, the first three-day run without a Covid-19 fatality in more than 15 months. The region is now averaging about one death a day. The Bay Area has some of the state's best vaccination rates, with 80% of the overall eligible population at least partially vaccinated. S.F. Chronicle

Dozens of states, including California, sued Google on Wednesday, accusing the tech giant of operating an illegal monopoly with its Google Play app store. The fourth antitrust suit to be lodged against Google since October, it argues that the tech giant abuses its market power to collect commissions up to 30% from app developers. Google called the lawsuit "meritless." Washington Post | Vox 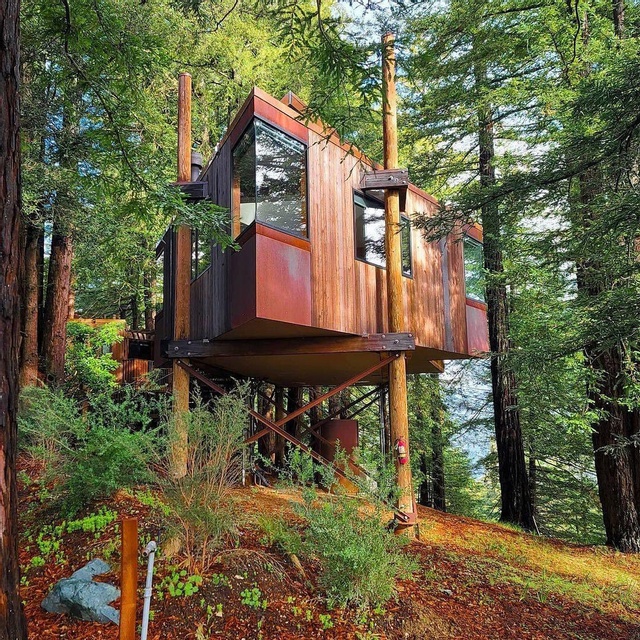 Since Jan. 6, far-right groups have tried to make a martyr out of Ashli Babbitt, the San Diego woman who was fatally shot as she tried to breach the entrance to the Speaker's Lobby deep in the U.S. Capitol. Now former President Trump is taking up the cause. On Wednesday, he called for the officer who shot Babbitt to be named: “The person that shot Ashli Babbitt. Boom. Right through the head. Just, boom. There was no reason for that. And why isn’t that person being opened up, and why isn’t that being studied?” Washington Post | New York Magazine 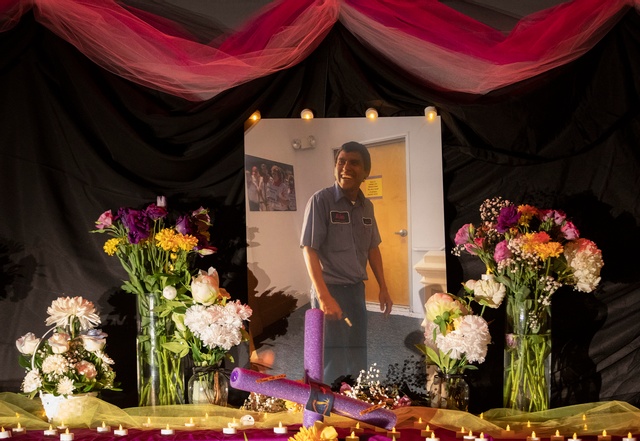 José Tomás Mejía was memorialized at a vigil near downtown Los Angeles on June 17.

José Tomás Mejía, a dutiful janitor at a Los Angeles apartment complex, had a smile that seemed to never leave his face. On June 16, he was fatally stabbed after encountering a 17-year-old in a stairwell who police said was aiming to harm a tenant. A reporter told the story of Mejía's rich life — how he slept on empty cement bags in Mexico until he saved enough to come to the U.S., how he financially supported his family in El Salvador, and how he was a legend among those who knew him. L.A. Times

The authorities just carried out the largest illegal marijuana bust in Los Angeles County history — and it only eradicated a fraction of the total illicit grows in the Southern California high desert. All told, the raid netted 373,000 plants in the Antelope Valley with a street value of more than $1 billion, officials said. California legalized recreational marijuana in 2018, but the black market still flourishes thanks to hefty taxes and local ordinances against opening shops. A.P. | Valley Post 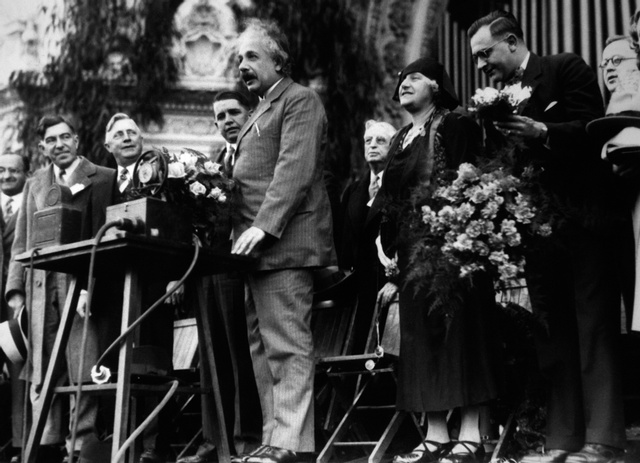 Albert Einstein spoke during a welcome reception in San Diego on Jan. 2, 1931.

During a visit in 1931, Albert Einstein became so enamored by California that he spent three consecutive winters here.

The shaggy-haired genius was initially lured to Caltech in Pasadena by Arthur Fleming, a lumber baron and president of the university's board of trustees. His arrival in San Diego after 30 days at sea was a spectacle, with serenading school children and a mob of reporters and photographers.

Ensconced with his wife Elsa in a Pasadena bungalow, Einstein befriended Charlie Chaplin, played his violin with the L.A. Philharmonic's conductor, and refined his theory of relativity at Mount Wilson Observatory. He was smitten, writing to friends in 1931, “Here in Pasadena, it is like Paradise. Always sunshine and clear air, gardens with palms and pepper trees and friendly people."

By the winter of 1933, with anti-Semitism swirling through Europe, it became evident that Einstein needed a safe haven. Caltech seemed to be a perfect fit, and the university recruited him aggressively.

But, according to several accounts, campus leaders bungled the negotiation, offering him a paltry sum and rejecting his request that a position be created for his assistant. He went instead to Princeton, where he shared the secrets of the universe until his death in 1955.

Below, a few more pictures from Einstein's Pasadena days. 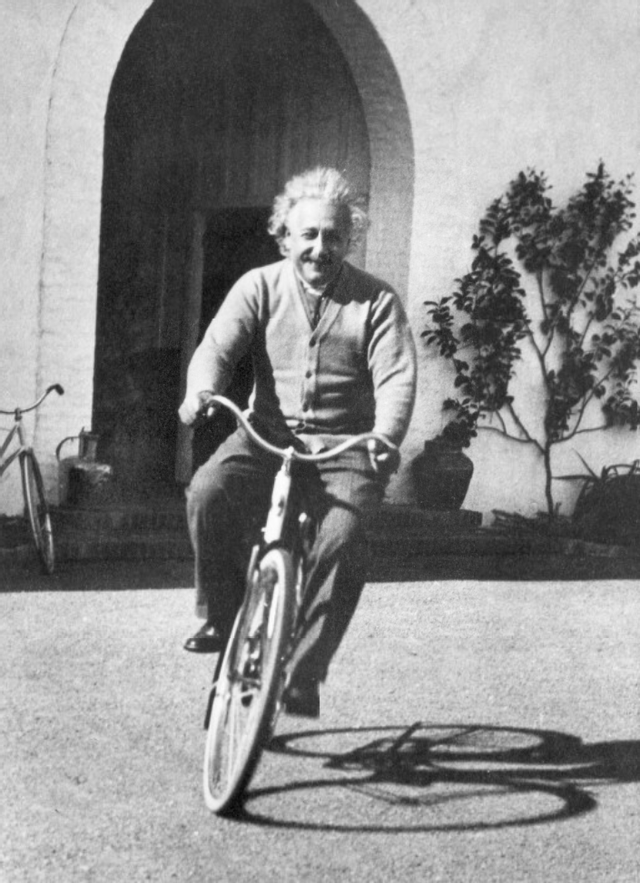 Einstein at the Santa Barbara home of Ben Meyer, a Caltech trustee, on Feb. 6, 1933. 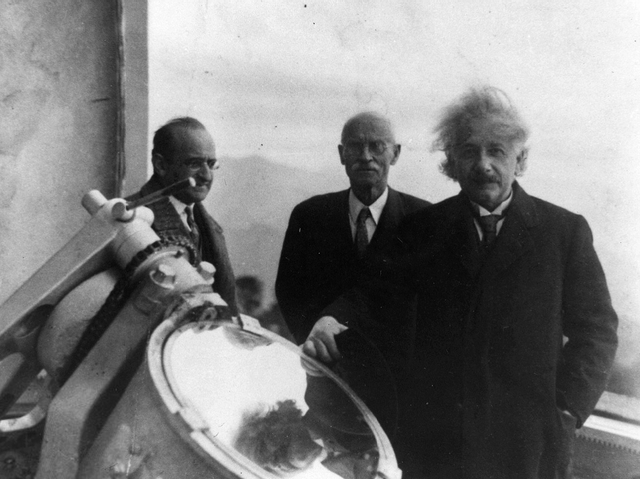 At Mount Wilson Observatory with the Austrian mathematician Walther Mayer, left, and Charles St. John, a member of the observatory staff. 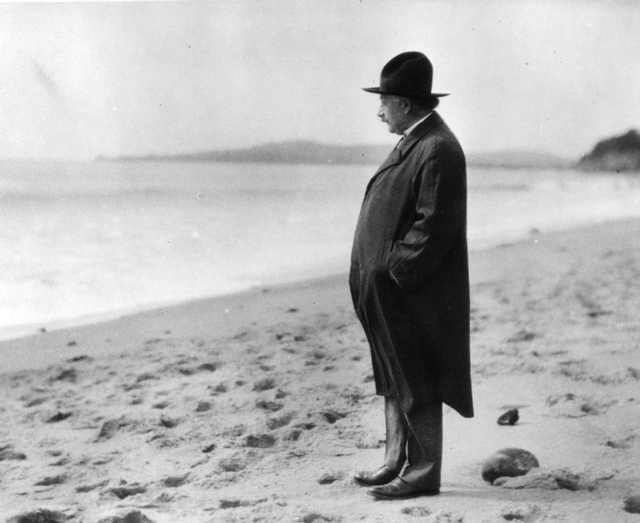 On the beach in Santa Barbara. 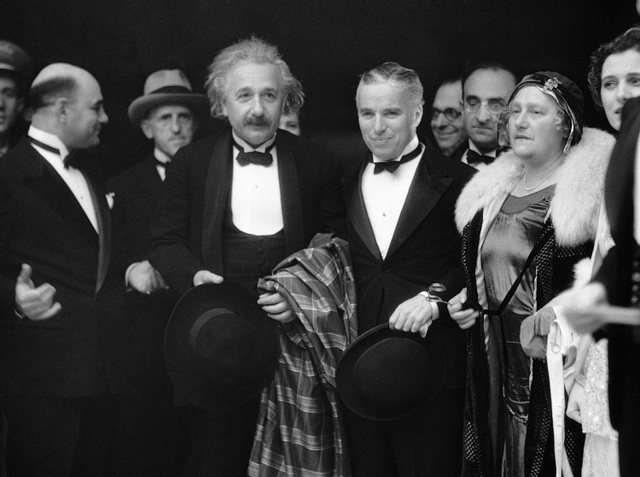 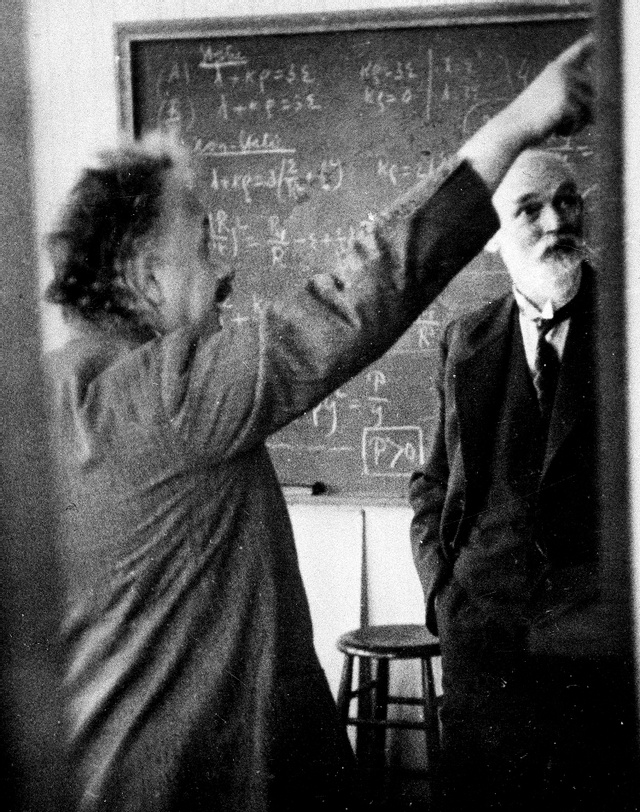 Einstein and Dr. Willem DeSitter, a Dutch astronomer, discussed a formula in Pasadena on Jan. 8, 1932. 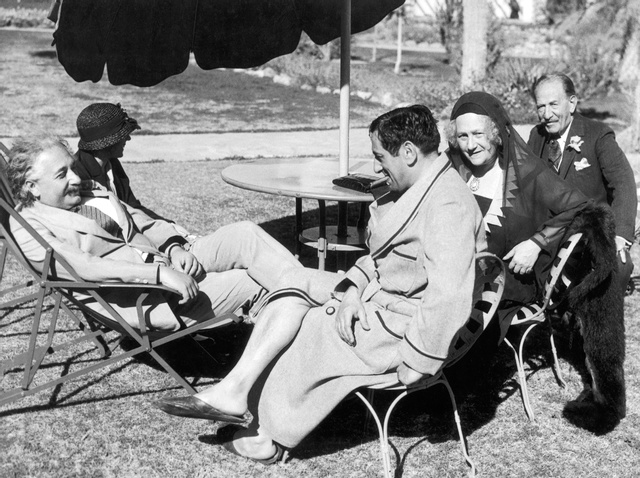 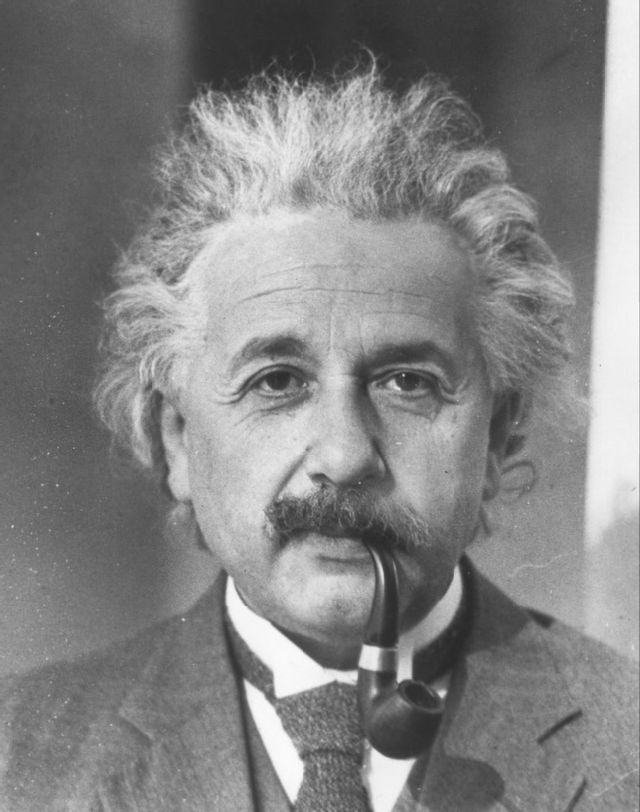