Gov. Gavin Newsom announced plans for several mass Covid-19 vaccination centers as the state seeks to dramatically expand its inoculation campaign, until now one of the slowest in the nation. Sites are expected to open as soon as this week at Sacramento's Cal Expo, Disneyland, Dodger Stadium, and San Diego's Petco Park. Those who can administer the injections have been expanded to include pharmacists, dentists, and paramedics. KPBS | S.F. Chronicle

Mariposa County is among the first places to move to vaccinate teachers. See the state's rollout phases. 👉 Covid19.ca.gov 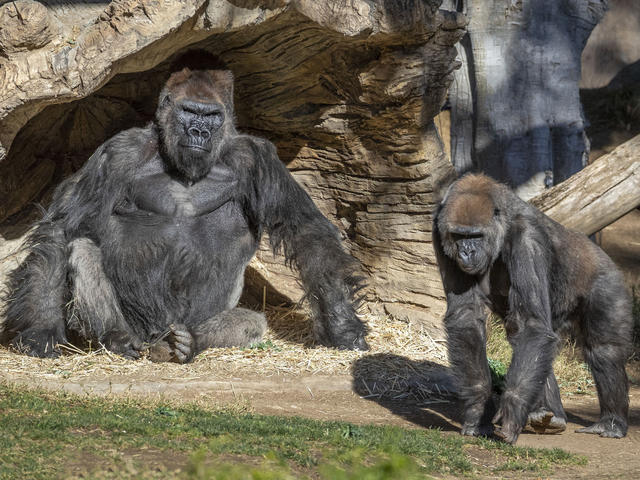 At least two gorillas at the San Diego Zoo Safari Park tested positive for the coronavirus in the first known natural transmission of the virus to great apes. The infection is believed to have come from park staff who also tested positive. The gorillas appear to be fine, aside from some coughing and congestion. The coronavirus has previously been detected in cats, dogs, lions, tigers, pumas, mink, and snow leopards. S.D. Union Tribune | A.P.

“The light at the end of the tunnel.”

Both the University of California and USC announced Monday that they would resume in-person classes in the fall in anticipation of widespread distribution of vaccines. California State University said last month that it would do the same. The moves represent a return to normalcy for more than 800,000 students who have seen their campus lives put on hold for nearly a year. L.A. Times | Mercury News

Rep. Kevin McCarthy, a close Trump ally who voted against certifying Joe Biden's victory in two states, told the president that he bears some blame for the deadly Capitol riots, sources told Politico. The top House Republican opposes impeachment, but he has signaled openness to some form of censure. As many as a dozen Republicans were said to be considering joining Democrats to impeach. Politico | N.Y. Times

Rep. Darrell Issa, a Republican from San Diego County, on plans to impeach Trump: “It’s kicking him when he’s down.” S.D. Union-Tribune 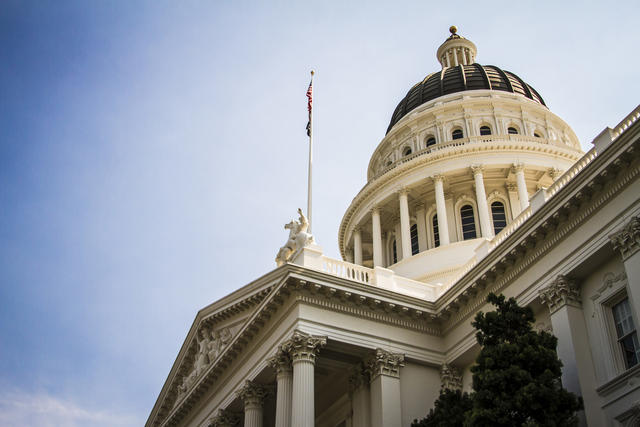 The state Capitol building in Sacramento.

Law enforcement officials were adding security measures at the Capitol in Sacramento in response to FBI warnings of possible attacks at statehouses in the days leading up to Joe Biden's Jan. 20 inauguration. Gov. Gavin Newsom said mobilization of the National Guard could be ordered “as needed.” "Everybody is on a high alert," he said. Sacramento Bee | L.A. Times 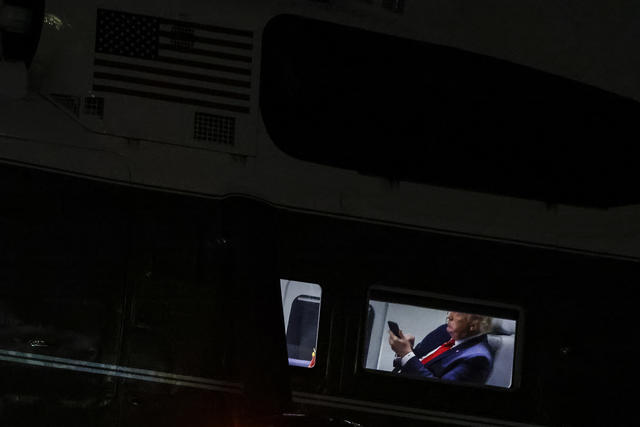 President Trump on his phone inside Marine One at the White House on Aug. 9.

Silicon Valley broadened its extraordinary muzzling of President Trump and his allies. Among the latest to join the campaign were GoFundMe, which barred fundraising for travel to Trump events, and Salesforce, which restricted the RNC's use of its products. The Great Deplatforming, in the coinage of tech reporter Casey Newton, has highlighted the power of a small number of companies to drive voices from the digital public square. S.F. Chronicle | BuzzFeed

More than 160 faculty members called on Chapman University, a private university in Orange, to fire a law professor who helped fire up the crowd at the "Stop the steal" rally in Washington last week. Chapman's president refused. "I realize that my position has made me very unpopular with many of you," he wrote. "As much as that saddens me, it will not compel me to violate the rules under which the university operates." SFGate.com | Inside Higher Ed 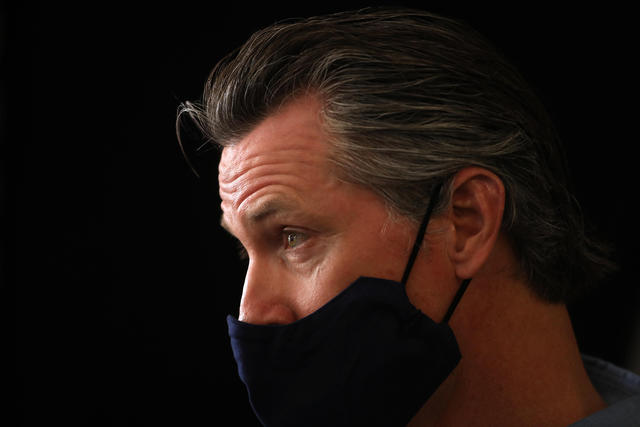 Halfway through his first term, Gov. Gavin Newsom has become a locus of frustration for many Californians, and Republicans have sensed an opportunity to wound him with a nascent recall drive. Ted Costa, who helped spearhead the recall of former Gov. Gray Davis in 2003, offered a warning. “People are really pissed off,” he said. “Things can get hot quick, and I don’t know if Newsom realizes what happens when a groundswell hits.” Politico

Bakersfield has reached “functional zero” for chronic homelessness, meaning the city has all but eliminated homelessness lasting more than a year. The city's accomplishment has been attributed in part to a “by-name” approach that tracks every individual on the street. “It’s hard for agencies or county governments to think of people experiencing homelessness in the abstract when you’re really dealing with them by name,” a homeless advocate said. “They’re not a number on a spreadsheet.” Fast Company

A 91-year-old woman was shot dead by sheriff's deputies outside her home in the Southern California desert after she placed a 911 call reporting intruders. The authorities said the woman, Betty Francois of Spring Valley Lake, exited the home with a shotgun, ignored orders to drop it, then pointed it at deputies. People who knew Francois said she was blind and deaf — a “precious and petite little lady” — and that she often mistakenly thought someone was breaking into her home. Victorville Daily Press | Victor Valley News Group

On Jan. 8, the surfer Peter Mel rode what surfing publications are calling one of the most glorious waves ever surfed at Mavericks, the fabled Half Moon Bay break. For a moment, he disappeared inside the barrel. Mel called it the best wave he'd caught in 29 years of surfing Mavericks. "It's weird," he said. "I feel depressed right now. What do I look forward to now?" Surfer Today | Surfline 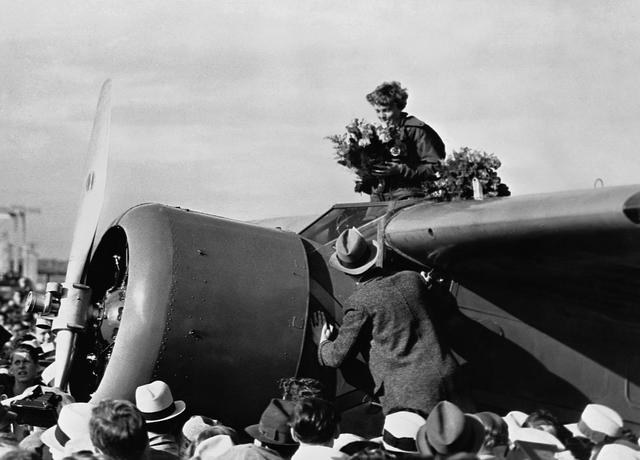 Amelia Earhart emerged from her plane in Oakland after flying solo from Hawaii on Jan. 12, 1935.

Coastal Californians scanned the skies for hours in anticipation of her arrival.

At Oakland Airport, a nervous tension permeated a crowd of roughly 10,000 onlookers. “Then,” the S.F. Chronicle reported on the events of this day in 1935, “out of the veil of mist, without warning, came the plane.” Amelia Earhart's red monoplane streaked into view and touched down, having completed the first solo flight between Hawaii and California.

The crowd went wild, tossing hats into the air. As Earhart poked her unruly blonde hair from the cockpit, someone put a bouquet of roses into her hands. After 18 hours and 17 minutes of airborne solitude, Earhart was mobbed by adorers.

"It was nothing," she said of a feat that had killed 10 fliers on previous attempts. "Just sitting there and getting dirty. I may go east tomorrow." 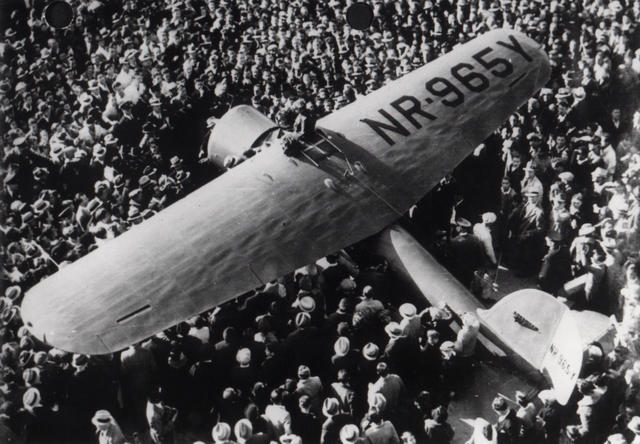 Earhart's plane was swarmed by admirers in Oakland.

Earhart often said the lure of flying is the lure of beauty. In her account of the flight, she wrote of the wonder of soaring through the inky skies over the Pacific. The stars, she wrote, "seemed to rise from the sea and hang outside my cockpit window, near enough to touch, until hours later they slipped away into the dawn.”

Two years later, Earhart again planned to make Oakland the stage for history. Along with a navigator, Fred Noonan, she took off from the city's airport on an attempt to become the first woman to circumnavigate the globe.

But there would be no repeat of the jubilant reception of 1935. Earhart and Noonan completed two-thirds of the journey, but while crossing the Pacific this time the stars hid behind a veil of clouds. Celestial navigation became impossible.

On July 2, 1937, the plane lost contact. The duo was never found. Earhart, 39, by then probably the most famous woman in the world, passed into legend, the embodiment of a modern woman's adventurous spirit.

She accepted the risks of her passion, Earhart once wrote to her husband. “I want to do it because I want to do it. Women must try to do things as men have tried. When they fail, their failure must be but a challenge to others.”