The columnist George Skelton said with the problem with Gov. Gavin Newsom, a Democrat sweating a Republican-led effort to oust him in a deeply blue state, is likability. One-on-one, Newsom is pleasant and puts people at ease, he wrote. But that fails to come through on television: "Few politicians possess the natural gifts needed to inspire voters. And Gov. Gavin Newsom certainly is not one of them." L.A. Times 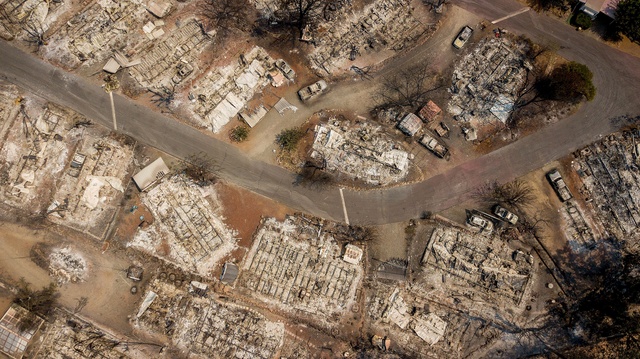 Burned properties at the Creekside Mobile Home Park in Clearlake.

California wildfires, by the numbers, on Monday: 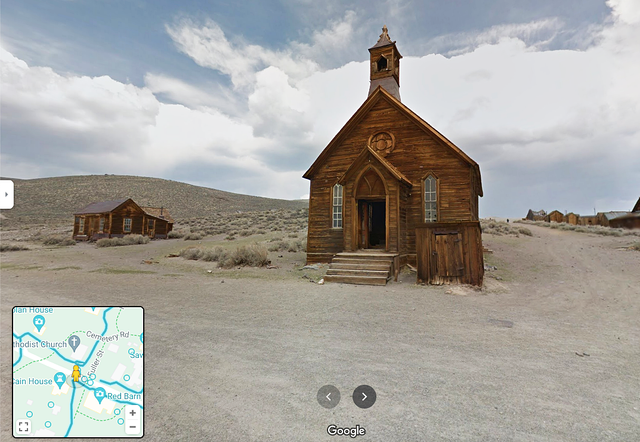 Thanks to a partnership that began in 2014, Google has added tours of 110 parks using backpack camera rigs that capture sharp 360-degree views. So before you commit to a trip, you can walk virtually along the legendary surf breaks at San Onofre, stroll the ghostly streets of Bodie, or drop into the primeval redwood forest of the Del Norte coast. The Dyrt Magazine recommended five favorite virtual treks. 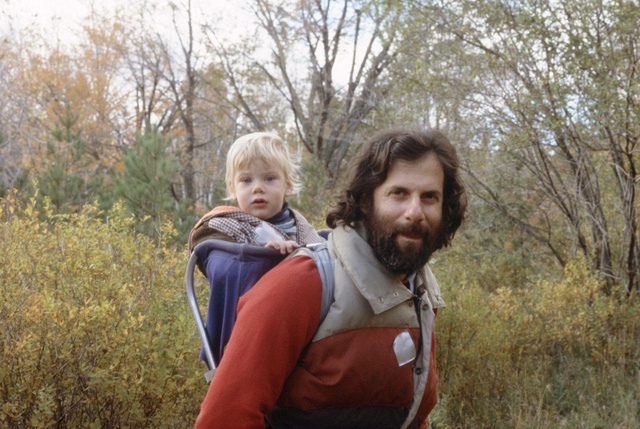 Chesa Boudin with his father before the armored truck heist.

Hours before leaving office on Monday, New York Gov. Andrew Cuomo granted clemency to David Gilbert, 76, the father of San Francisco District Attorney Chesa Boudin. Gilbert, who was a member of the Weather Underground, drove a getaway car in a 1981 armored truck robbery in New York that left a guard and two police officers dead. He was sentenced to 75 years. Boudin celebrated the news on Twitter. "My heart is bursting," he wrote. Arthur Keenan Jr., a retired detective who was wounded in the heist, called Cuomo a traitor. N.Y. Times | S.F. Chronicle

A data breach at Chico State exposed details on roughly 130 students who sought religious exemptions from the Covid-19 vaccine required to attend classes this fall. Most cited Christian beliefs, and most were approved. Among the reasons given:

“No one requires anyone in the United States to consume a substance contrary (sic) to their faith.”

“My sincere religious beliefs and reading of the Scripture would make it a sin for me to take the vaccine.” Sacramento Bee | A.P.

Dr. Tracy Ruscetti, a Bay Area scientist with a doctorate in microbiology and immunology, has attracted nearly half a million followers on TikTok with pithy explainers about the coronavirus and vaccines. But her most delightful posts are those where she debunks low-information vaccine skeptics in real-time — like this gem, in three parts. 👉 Part 1 | Part 2 | Part 3

First the masks returned. Then San Francisco started mandating proof of vaccination to dine indoors. Now customers spooked by the Delta variant are bailing on their dinner plans. The reservation site OpenTable showed that dining is down 16% in San Francisco compared with July, with business as much as 66% below 2019 levels. S.F. Chronicle | Eater San Francisco 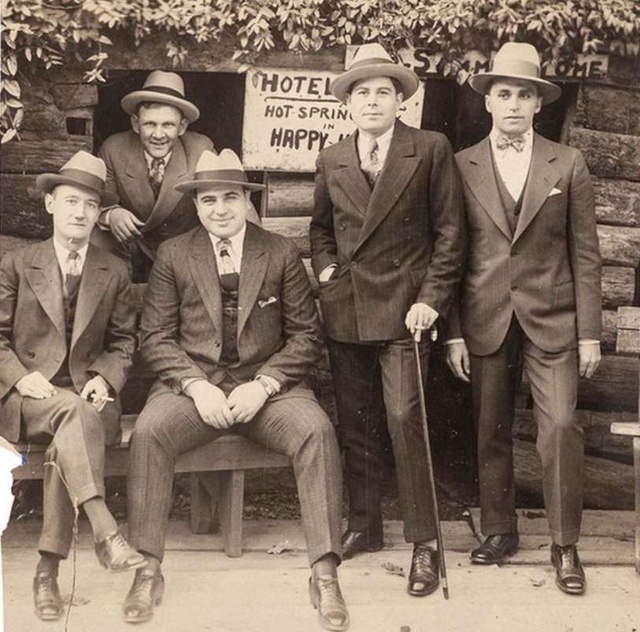 A photograph of Al Capone and his associates at Hot Springs, Arkansas, is going up for auction.

Al Capone's three surviving granddaughters, who have lived quietly in the Bay Area and Auburn area for decades, are planning to auction off a trove of the gangster's personal possessions. Diane Capone said the women wanted to unload it all because they are in their 70s. “We decided it was time to deal with this and to let the public have it,” she said. Among the items: his favorite Colt .45 pistol and a Patek Philippe pocket watch monogrammed with 90 diamonds. CBS13 | S.F. Chronicle

Bakersfield on Monday agreed to a slate of police reforms after a four-year investigation by the California Department of Justice found a pattern of abuses. Under the agreement, which required no admission of fault, an independent monitor will track the police department's progress for five years. Without offering specifics, the state said Bakersfield police had used excessive force, made improper stops, and failed to accommodate non-English speakers, among other violations. Bakersfield Police Chief Greg Terry disputed the findings. Bakersfield Californian | A.P.

A police officer in the Central Coast town of Guadalupe killed a bystander sitting in a car while shooting at a suspect on Saturday, authorities said. Guadalupe police officers had recognized a wanted individual near an intersection when one of the officers opened fire at the suspect but instead struck Juan Luis Olvera-Preciado, 59. It was unclear what prompted the shooting. The California Department of Justice is investigating. Santa Maria Times | A.P. 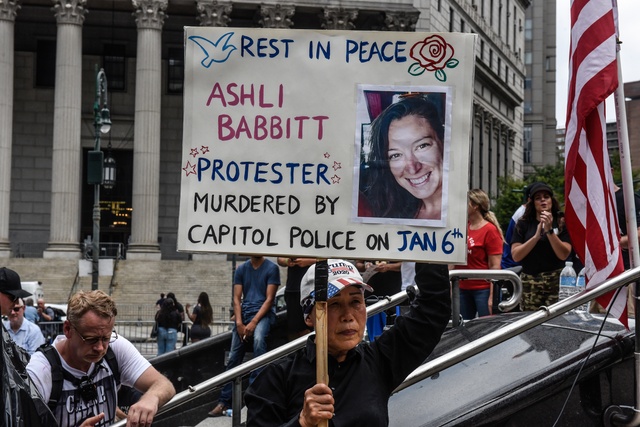 Protesters rallied on July 25 in New York for the release of people arrested in the Jan. 6 Capitol siege.

The U.S. Capitol Police announced on Monday that they had cleared the police lieutenant who fatally shot Ashli Babbitt, the 35-year-old San Diego woman who was among the horde that stormed the Capitol on Jan. 6. Babbitt was trying to climb through a hole in the glass doors of the Speaker's Lobby when she was shot. “The actions of the officer in this case potentially saved members and staff from serious injury and possible death,” the Capitol Police said, noting lawmakers were steps away. Far-right groups have portrayed Babbitt as a martyr. Washington Post | N.Y. Times 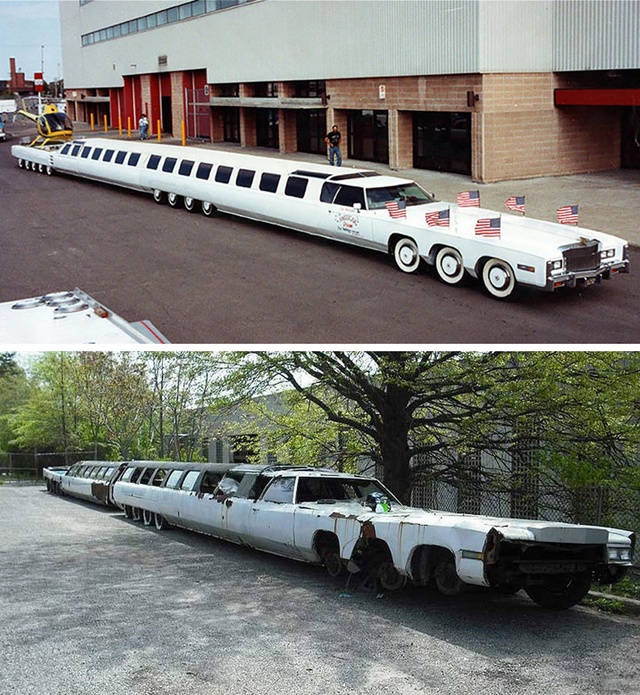 The American Dream, top, in its 1990s glory, and after falling into disrepair.

In the late 1980s, Jay Ohrberg had a dream. One of Hollywood's top car customizers, he had built KITT from "Knight Rider," Herbie from "Herbie the Love Bug," and the "Back to the Future" DeLorean. Now he aimed for a place in the record books with the longest car ever built, a Cadillac limousine that stretched 100 feet, with 26 wheels, a helipad, waterbed, putting green, and jacuzzi. He called it the American Dream. Depending on whom you asked, others called it a marvel or monstrosity. Perhaps inevitably, the limo fell into disrepair. But a second act is now in the works. In 2019, the limousine was broken into two parts and shipped to a car museum in Orlando that is restoring it to its former glory. Motor1.com | Autotrader