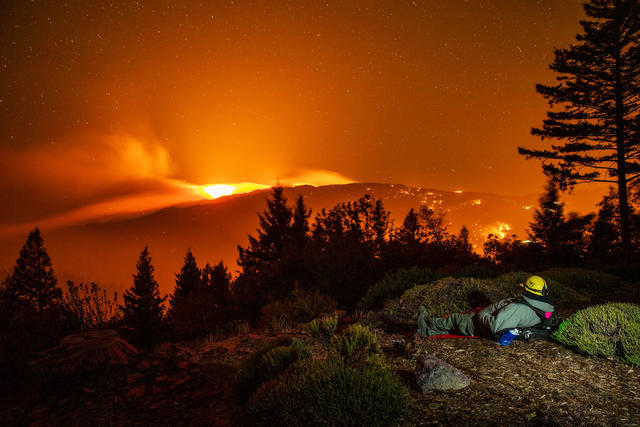 A firefighter watched the advance of the Kincade Fire east of Healdsburg on Tuesday.

Northern California braced for high winds to fan the massive Kincade Fire as it crept toward Santa Rosa. By late Tuesday, the inferno had spread 119 square miles, engulfed 86 homes, and was just 15 percent contained. An army of 4,900 firefighters and personnel were amassed for the battle. Press Democrat | S.F. Chronicle

Press Democrat photographers have been capturing the harrowing fight against Kincade. Here are 50 photos.

Here's a live map of the fire. Also, track other major blazes and view fire cameras across California.

"A failure of epic proportions."

PG&E shut off power to roughly 500,000 homes and businesses across Northern California in its third round of mandatory blackouts in less than a week. The utility said it may start restoring power early Wednesday, a process that can take 48 hours.

Responding to growing anger, PG&E planned to offer rebates to customers affected by the Oct. 9 outage, which was plagued by a faulty website and poor communication. A.P. | S.F. Chronicle 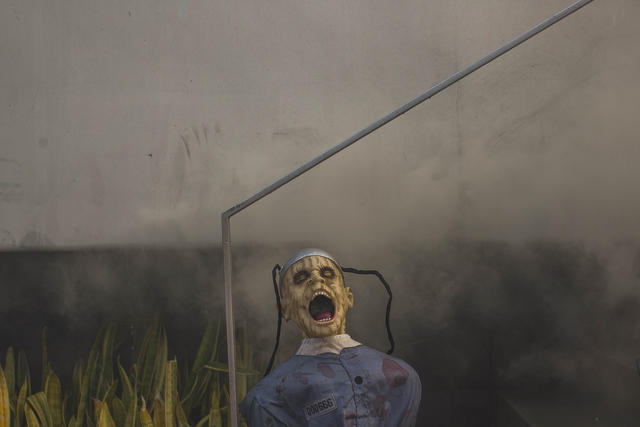 A Halloween decoration created an eerie vibe at a home in the area of the Getty Fire on Monday.

In Southern California, the National Weather Service issued an "extreme red flag warning," a term meteorologists said they couldn't remember ever using before. Forecasts called for what could be the strongest winds in more than a decade between Tuesday and Thursday, with gusts of up to 80 mph. The weather could be disastrous if it accelerates the Getty Fire, still smoldering on Los Angeles's west wide. L.A. Times | CNN

Investigators said the Getty Fire likely started after a eucalyptus branch fell onto an electric line, causing sparks to ignite dry grass. "This was, simply put, an act of God," the mayor said. A.P. | LAist

On Monday, housekeepers showed up to work in a Los Angeles neighborhood lined with multimillion-dollar homes because their bosses neglected to tell them they evacuated. "I should just go home," Marcela Aquino said. She had seen two other housekeepers also walking to work that morning as ash rained down. "They didn't tell us," she said. "They need to tell us not to come." L.A. Times 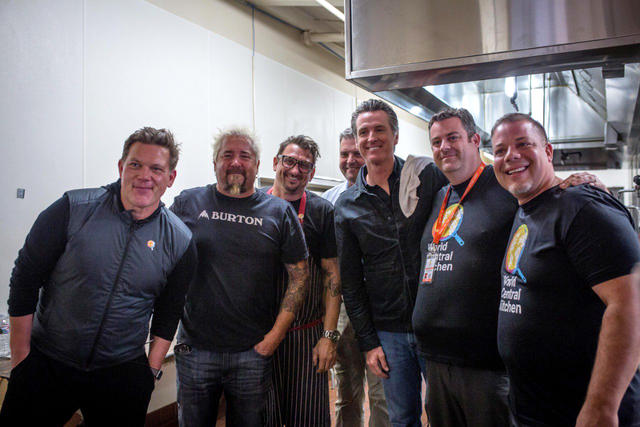 Gov. Gavin Newsom stopped by as Guy Fieri, second from left, and other chefs served food in Sonoma County.

Celebrities stepped up to help firefighters and evacuees.

California's indiscriminate infernos often underscore the state's vast income inequalities. A man who lost his spacious home in the Sonoma hills two years ago, for example, built a better house with his insurance payout. "We are now living the silver lining," he said. Many others, however, are ruined and years later still have nothing. N.Y. Times

A coalition of California students and community groups vowed to sue the University of California system unless it drops the SAT and ACT exams from its admissions requirements. In a letter to the UC Regents, the group said the tests discriminate against black and Hispanic students who can't afford private tutors or prep courses. Many universities have already dropped the tests. A.P. | S.F. Chronicle

A 7-foot-tall Californian leads what is perhaps the world's most influential small-group Bible study. Ralph Drollinger, a former UCLA basketball player, holds weekly gatherings for members of the Trump Cabinet, where he teaches that the Bible is more than the literal word of God — it is the only defensible basis for any rational thought. N.Y. Times

Flashback: In 2004, Drollinger caused an outcry in Sacramento when he wrote that women lawmakers with young children at home are sinners. L.A. Times 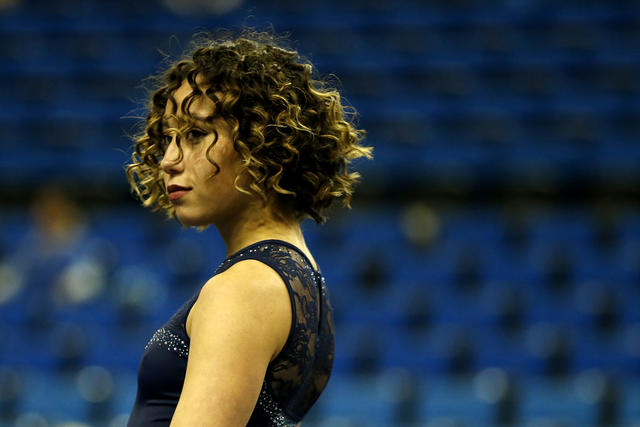 UCLA gymnast Katelyn Ohashi has complained of being "handcuffed" by NCAA rules that prevent athletes like her from profiting on their image.

California has forced the NCAA's hand. After initially opposing a state bill that lets student athletes earn endorsement money, the NCAA has now opened a path toward allowing players to market themselves. "We must embrace change," an NCAA official said. The organization, however, notably stopped short of saying athletes would actually get paid, saying instead that they could "benefit" without clarifying what that means. Bloomberg | CBS Sports

A trio of Silicon Valley gig-economy companies — Uber, Lyft, and DoorDash — unveiled a ballot measure that would essentially exempt them from a new law requiring that their workers be treated as benefits-earning employees. The group pledged to spend $90 million on the effort, making it one of the most expensive ballot measures ever. A.P. | The Verge

"It feels like I'm being punished because I went into public service instead of inventing a dating app for dogs or something," she said. S.F. Chronicle 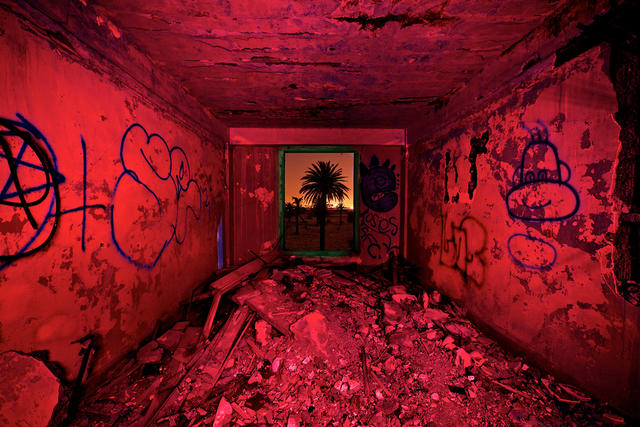 Behind barbed-wire fences and "no trespassing" signs in the southern Sacramento-San Joaquin Delta is one of the Bay Area's creepiest abandoned places. Built in 1889, the Byron Hot Springs Hotel was once among California's premier playlands, visited by Joe DiMaggio, Charlie Chaplin, Mae West, Jack London, and Clark Gable. It was later used as a WWII interrogation center and a monastery before assuming its latest incarnation: a gutted, graffiti-covered object of fascination for urban explorers. Sacramento Bee | Atlas Obscura

A couple of photographers explored the ghostly ruins, pictured above. Flickr | Lost America 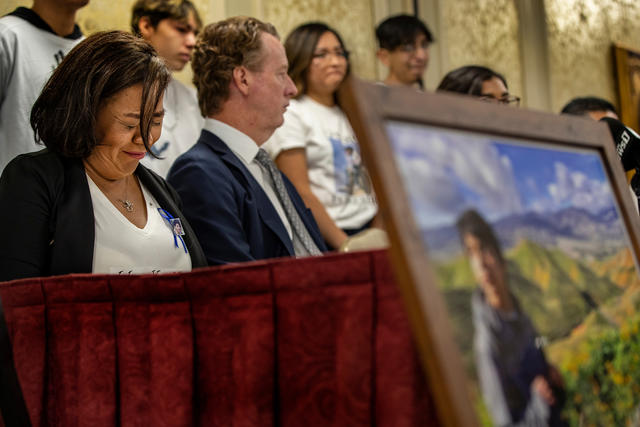 Juana Salcedo, aunt and legal guardian of Diego Stolz, during a news conference in Riverside on Tuesday.

Last month, Diego Stolz, 13, told an assistant principal at his Moreno Valley middle school that he was being targeted by bullies. He was told they would be suspended. But when Stolz returned to school after the weekend, there were his antagonists, ready to brawl. Around lunchtime, they pounced, delivering blows to the head that killed Stolz. Those are the allegations laid out in a new legal claim against the school district by Stolz's family. "This family did all the right things," their lawyer said. "They went in and complained and did everything right. But the school failed them." Press-Enterprise | L.A. Times

In the last decade, about 150 million square feet of warehouse space has been built in the Inland Empire, making it possible for Amazon and others to get packages to your door lickety-split. But as the region has transformed into a logistics hub, residents have found themselves surrounded by massive warehouses. "Boxed," one man said. "We're boxed in from either direction. We hear the forklifts at night. The rumbling of trucks when they're docking, it's just nonstop." L.A. Times