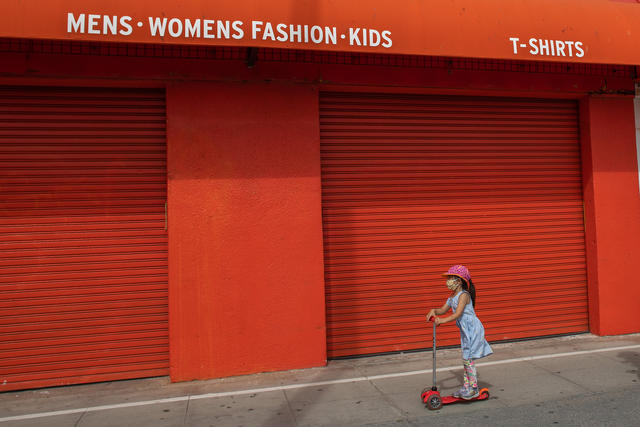 A girl rode her scooter in Venice on April 26.

All Los Angeles residents must now wear masks when outside the home, Mayor Eric Garcetti announced Wednesday. The order significantly tightens restrictions that had required the coverings only in businesses and public transportation. Bring your mask everywhere, the mayor said. "That will help us get more freedoms." L.A. Daily News | KABC

Some people are vehemently opposed to masks. Here's video of a brawl that broke out at a Van Nuys Target after two men refused to wear them. They were arrested. LAPD/YouTube

Once a united front, the Bay Area is now fracturing in its response to the coronavirus. San Francisco, San Mateo, and Marin counties said they were loosening their shelter-in-place orders, with curbside retail allowed to start on Monday. Santa Clara County won't join them, the health official Dr. Sara Cody said: "The conditions really haven't changed in our county. We don't suddenly have herd immunity. We don't have a vaccine. We have exactly the same conditions as we did in March." Mercury News | SFGate.com 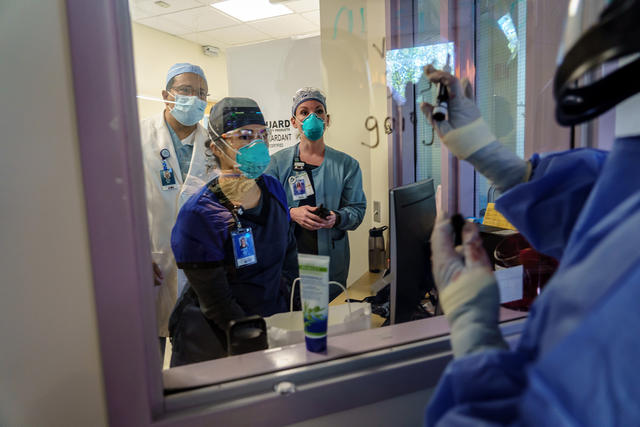 A nurse practitioner, right, communicated to colleagues from a Covid-19 isolation room at Scripps Mercy Hospital in Chula Vista on April 23.

Doctors in a California community near the Mexican border are attributing a surge of Covid-19 cases to legal border crossings. Hospitals in Chula Vista have been so busy that ambulances have been turned away some days. The influx, one medical professional said, is mostly people with dual citizenship or dual residence who regularly go into Tijuana, one of Mexico's hardest hit cities. Wall Street Journal | S.D. Union-Tribune

Here are a few eye-opening depictions of the Covid-19 crisis: 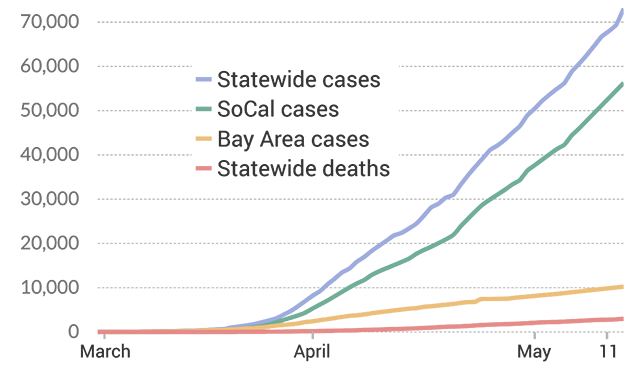 Veritas is San Francisco's biggest landlord, with more than $3 billion in reported assets. Yet it applied for and got a $3.6 million loan from the Payroll Protection Program, created by Congress to rescue small businesses battered by the coronavirus. Veritas has been accused in multiple lawsuits of shirking repairs and harassing tenants to drive them from rent-controlled apartments. Mission Local | S.F. Chronicle

On March 13, Patagonia became among the first retailers to close its stores. Yet even as competitors scramble to reopen, the Ventura-based company does not intend to open any locations until June at the earliest and is prepared to wait until the fall. "We're not going to necessarily follow what the state decrees are," its CEO said. N.Y. Times 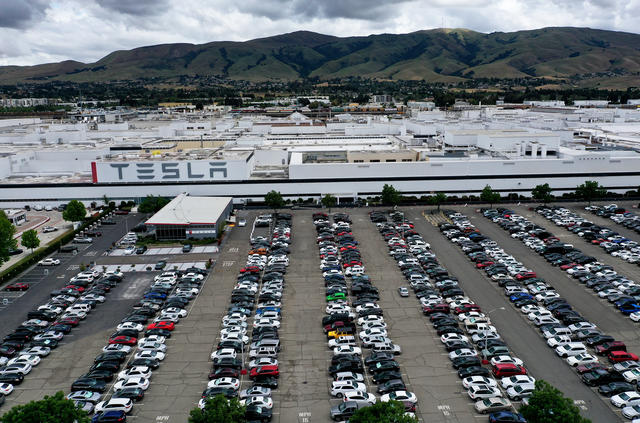 A full parking lot at the Tesla factory in Fremont on Tuesday.

Alameda County officials appear to have capitulated to Elon Musk, saying in a statement that Tesla can reopen its Fremont factory next week without acknowledging that it's already been operating for several days. Tesla told Bloomberg that the company is ramping up car operations this week and preparing for full production. CNN | Bloomberg 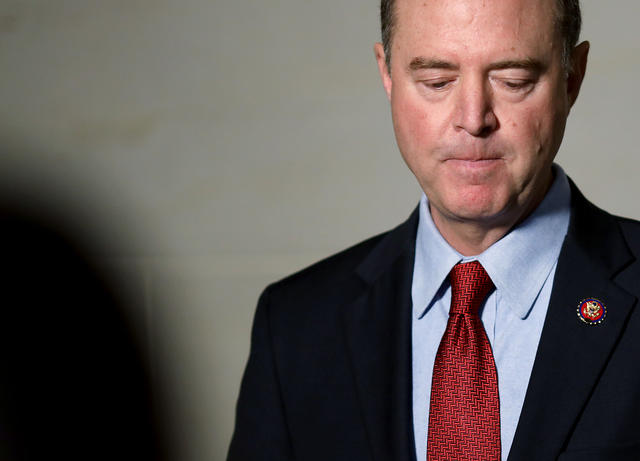 The Wall Street Journal published a scathing editorial alleging that Rep. Adam Schiff "knew all along that there was no proof of Russia-Trump collusion." It cited newly released transcripts from the House investigation into Russia's meddling in the 2016 election. The editorial concluded: "President Trump often spreads falsehoods and invents facts, but at least he's paid a price for it in media criticism and public mistrust ... As for Mr. Schiff, no one should ever believe another word he says." Wall Street Journal (non-paywall version)

Mike Garcia, a former fighter pilot and political rookie, clinched victory in the race for an open congressional seat north of Los Angeles, flipping a blue district to Republican control for the first time in California in 22 years. Republicans are already casting the win as proof that they can reverse the suburban drubbing they suffered in the 2018 midterms. Washington Post | Politico 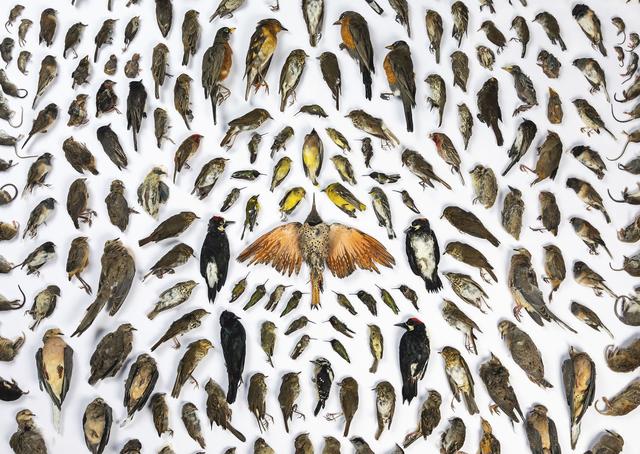 California made an appearance among the winners of the California Academy of Sciences' 2020 BigPicture Natural World Photography Competition. Jak Wonderly's "The Cost of Cats," above, took top prize in the "Human/Nature" category. Each year, hundreds of birds are brought to a San Rafael animal rescue group after being mauled by house cats. These didn't survive. The Atlantic | bioGraphic 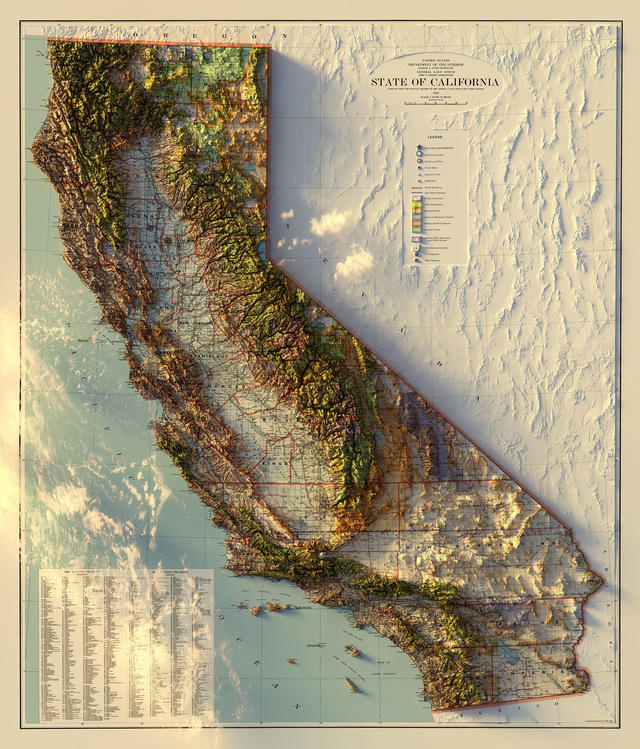 California was assembled, to borrow John McPhee's description, through a hundred million years of crashing tectonic plates. The result is a place of extreme topography, home to the highest and lowest points in the lower 48. For fun, a geographer named Sean Conway created a very cool depiction of California's jaggedness, above, using a 1944 Department of Interior map and exaggerated elevation data. Along with his other maps, it's been a massive hit on social media.