“Be concerned, but don’t panic.”

Officials said Sunday that the Omicron variant had not been yet detected in California, even as a growing number of countries reported cases of the worrying coronavirus strain first documented in South Africa. Gov. Gavin Newsom said Sunday that California was monitoring the variant but announced no new restrictions. The Chronicle asked five Bay Area experts how they were responding. None saw cause to alter their holiday travel plans. S.F. Chronicle | L.A. Times

See a map tracking the spread of Omicron. 👉 N.Y. Times 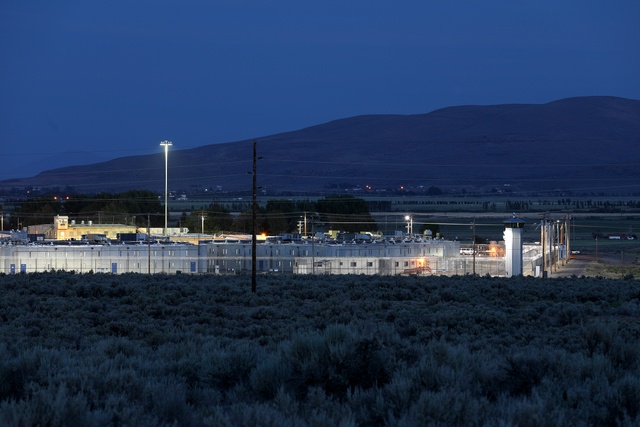 A federal appeals court on Friday temporarily blocked a judge's order that California prison guards must be vaccinated against Covid-19. While Gov. Gavin Newsom has insisted on vaccines or testing for government workers, he sided with the state's powerful correctional officers' union in fighting a mandate for prisons. In a lower court ruling, the judge accused Newsom of "deliberate indifference" to inmates' health. More than 240 inmates have died from the coronavirus in California's prisons. A.P. 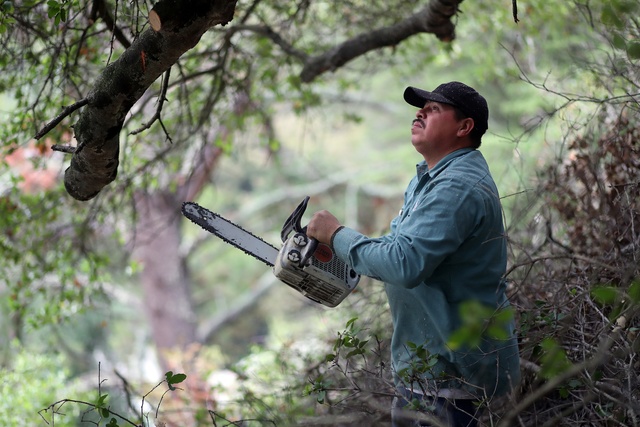 Jorge Mijango, a landscaper, cut trees at a property in Orinda on Nov. 16.

While many Californians welcomed a new law banning gas-powered lawn equipment, the measure is expected to hurt 50,000 small businesses, often run by immigrants. Many will have to buy a truckload of expensive electric tools, and crews will need to carry 30 to 40 fully charged batteries to last through a full day's work. The state proposed a subsidy to mitigate the cost: It amounts to a 50% coupon for a single tool. CalMatters 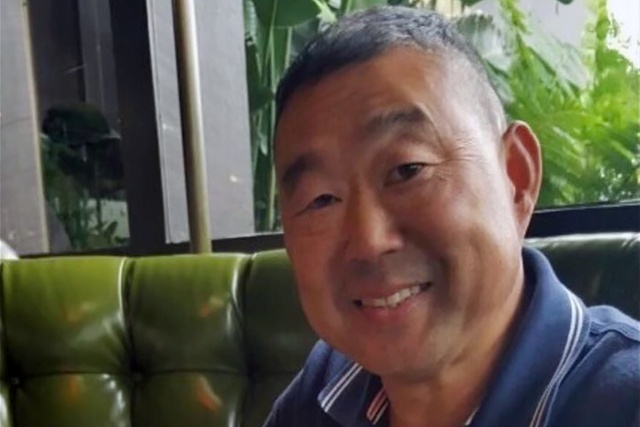 A security guard died Saturday after he was shot while protecting a TV news crew doing a story on a burglarized Oakland store, officials said. Kevin Nishita, a retired police officer, was shot in the abdomen as he tried to stop a man from stealing the crew's camera equipment, a former KRON reporter told the Chronicle. He left behind a wife and two young children. “It hurts to say, ‘was.’ He was just the kindest man,” said KPIX reporter Andria Borba. KPIX | S.F. Chronicle

A magazine article on the political repercussions of climate change included a striking anecdote from Northern California. After a 2018 wildfire all but destroyed the town of Paradise, the population of nearby Chico swelled with fire refugees. Residents expressed their alarm by remaking the seven-seat City Council at the ballot box. Before the influx, the council had five liberals; now it has one. Politico Magazine 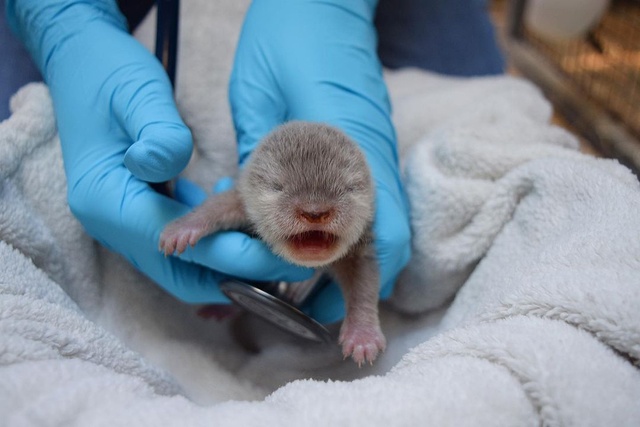 One of the baby otters got a checkup last week.

A film restorer used artificial intelligence to enhance video captured from the point of view of San Francisco cable cars in the 1960s. The result is mesmerizing, showing the elegant buildings, cool cars, and stylish residents of what many who lived through it regard as San Francisco's greatest decade. YouTube (~3:45 mins)

Some business owners are dreading the impending enforcement of Los Angeles’ new rule barring unvaccinated people from entering restaurants, gyms, and other venues. When Milbet Del Cid, a struggling restaurant owner, used social media to warn her clientele, which she said is mostly Guatemalan with low vaccination rates, criticism poured in. “If I don’t let customers eat," she said, "who’s going to lose that business? Me.” L.A. Times 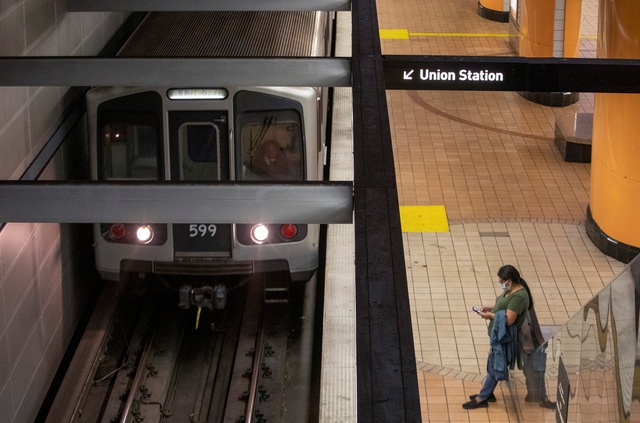 A woman waited for a train at North Hollywood Station on May 20.

Violent crime in Los Angeles' public transit system is exceeding pre-pandemic levels even though ridership hasn't fully recovered. In 2021, through September, reports of violent crime were up 25% compared to the same period last year. Sheriff Alex Villanueva cited the Oct. 10 murder of a 28-year-old woman to argue against a proposed shift to non-law enforcement alternatives, such as transit ambassadors, which he said would provide “an illusion of security.” L.A. Times 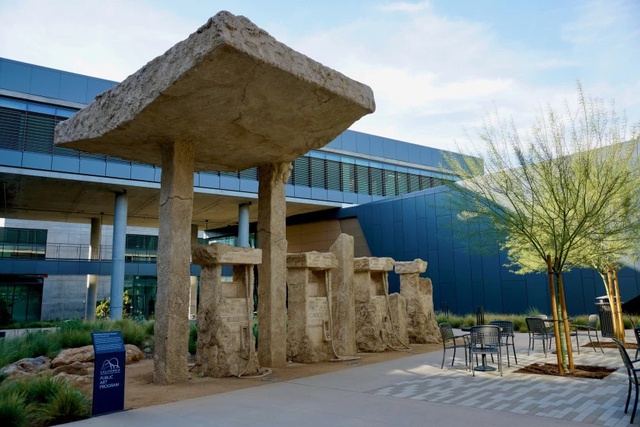 A sculpture of a fossilized gas station at the California Air Resources Board’s new facility in Riverside.

California’s new vehicle emissions testing and research facility in Riverside includes a limestone sculpture of a fossilized gas station, pictured above. The gleaming $419 million campus will allow air quality regulators to vastly expand testing of heavy-duty vehicles like trucks, buses and bulldozers. The columnist Tony Barboza said the petrified gas pumps were a fitting addition, as they leave no doubt about California's mission: "the elimination of fossil fuels that dirty the air and heat the planet." L.A. Times | A.P.

When Carlos Gauna began taking drone videos of marine life in Southern California waters last year, he would warn surfers about great white shark activity. But he's since realized how common — and overwhelmingly harmless — interactions between sharks and humans are. Here's a fantastic moment Gauna captured in October, as a dolphin, five sharks, and more than a dozen surfers gathered in close proximity. Stay for the 3-minute mark, when a great white approaches a paddle-boarding Orlando Bloom — yes, that Orlando Bloom. YouTube (~9:30 mins) 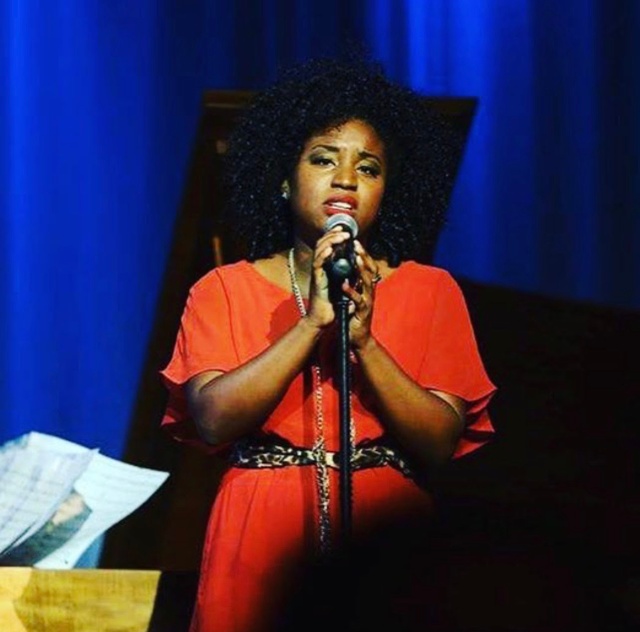 A: Although I am tempted to say the beach, I would have to argue that our scenic overlooks would be what I would want to show off. From Catalina Island to the Northern California Redwood Forest, you can find high peaks that overlook the cities, forest, and beaches — in L.A. County alone, you can find over 20. One of the most rewarding is Griffith Park. At its highest peak, you can see the city in action below you, the beach and ocean moving to the right of you and, if you head into the Griffith Park Observatory, you can gaze at the solar system above you.

I love all things Kendrick Lamar, but my favorite album by him is "To Pimp a Butterfly." It's almost like a coming-of-age story and being that he is from Compton, it moves me in a different way. It just hits home. The production is insanely impressive: the chord progressions, the pieces that were sampled, the melodic structure of his melodies — every single minute of it, GENIUS!

I have two. The Grand Central Market in downtown Los Angeles. It's been around since 1917 and you can find everything there. It's a mini-mall serving up spice, grocery, and restaurant vendors. Looking for Mexican, Italian, Asian, American or Greek style cuisines? Need a coffee break while working on your term paper? Want to grab a cold beer after work with friends? You find those experiences at the Grand Central Market.

The other cool spot is B&R Burgers in Hawthorne. I have been going there since I was a pre-teen. My mother and I would make a day of it. Giant burgers, fresh cut fries, amazing fresh squeezed lemonade. They even sell some really incredible ground turkey tacos.

My invitations would go out to Ms. Etta James, Walt Disney and Venus and Serena Williams (sorry, the Williams sisters are a package deal in my eyes, so I count them as one invite). I would start the conversation with two simple questions: Were you/are you satisfied in life? What did this level of satisfaction cost you?

When I look for jazz in California, I look to the young people — high-school to college-age. There is this perception that young people are not into jazz, but then I look at the Herbie Hancock Institute of Jazz in L.A. and the work they do with high school students, or the Fernando Pullum Community Arts Center and the progression of its young musicians studying and playing jazz (and in many cases, with legends).

I believe that Los Angeles is and will always be the epicenter for jazz music in California. I may be a bit biased as I was born and raised here, but we have a few hometown heroes that have contributed to this evolutionary success: Kamasi Washington, Ryan Porter, Keschia Potter, and Gretchen Parlato. These folks are seasoned enough to have some institutional knowledge of the original conversation in jazz and young enough to keep that conversation going with the kids that are looking to join in. If you want to see how jazz will evolve next in California, I recommend that you look to Los Angeles while keeping your eye on the young people.