In 2005, California conducted a test run in which thousands of taxpayers were spared the misery of filing a tax return. Instead, the state did it for them. Known as "ReadyReturn," the effort was so well received that it brought tears of joy to Joe Bankman, a Stanford law professor who helped guide it. Over the next decade and a half, Intuit and other tax software firms worked tirelessly — and successfully — to kill the project. L.A. Times 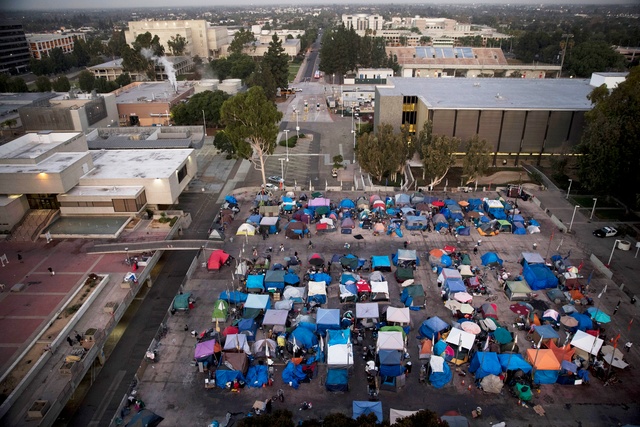 A homeless encampment in Santa Ana in 2017. Addressing a growing homeless population is among the rising costs of the opioid crisis for many local governments.

An Orange County judge on Monday ruled against several California communities that accused four drugmakers of causing a deadly wave of opioid addiction. “There is simply no evidence to show that the rise in prescriptions was not the result of the medically appropriate provision of pain medications to patients in need,” Superior Court Judge Peter Wilson wrote. The ruling was a rare victory for pharmaceutical companies in a wave of nationwide litigation. Reuters | NPR

A couple dispatches from the great resignation: 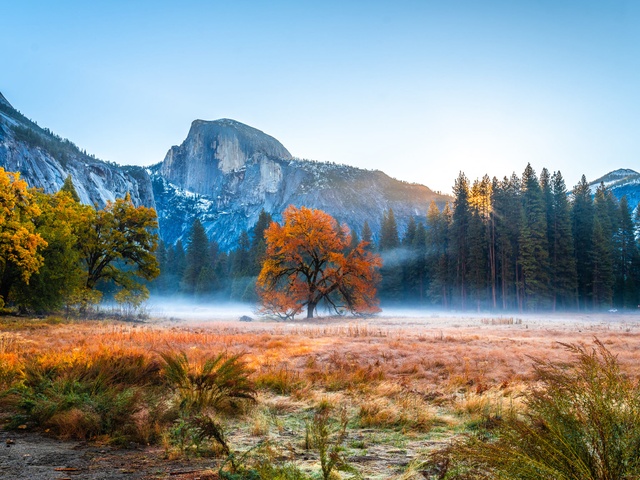 "Yosemite Valley is the most beautiful 2.12 square miles on Earth. Everything about it is perfection."

The colors of fall erupted over in Yosemite over Halloween weekend just as the valley's waterfalls came thundering back to life after the recent rains. A pair of photographers, Elliot McGucken and Steve Arita, published 23 exquisite pictures. 👉 California Fall Color 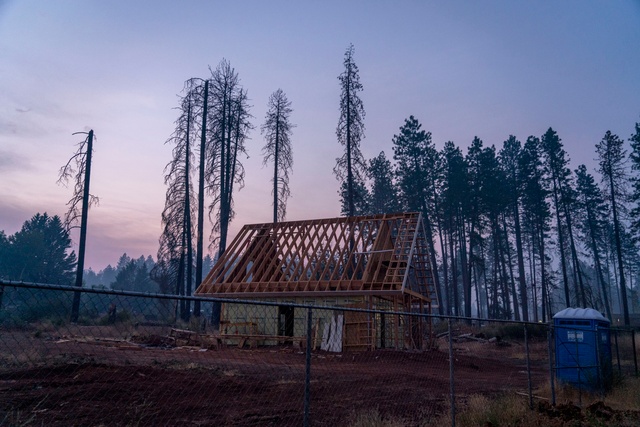 Smoke from the Dixie fire filled the sky above a new construction in Paradise on July 30.

Kyle Grillot for The Washington Post via Getty Images

Three years after the Camp fire destroyed the town of Paradise, roughly 6,000 people have have returned from a former population of 26,000. Rather than relocate to a safer place, they are attempting a radical experiment: encircling the entire community in a green buffer that can protect against the next big fire. N.Y. Times

The Times also profiled rural residents taking fire defense into their own hands in Trinity, Plumas, and Santa Clara counties.

An 18-year-old was fatally shot during a late-night party at the home of Gilroy City Councilwoman Rebeca Armendariz over the weekend. On Saturday, the authorities arrested a relative of Armendariz, 19-year-old Benjamin Calderon, on suspicion of murder. Police said a fight preceded the gunfire, but offered no motive. Mercury News | KTVU 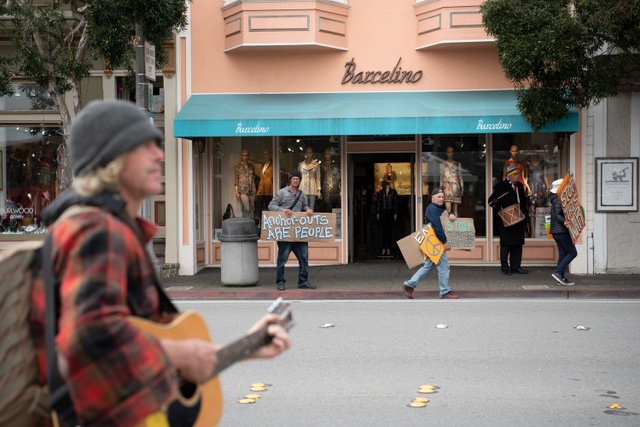 A protest in support of anchor-outs in Sausalito on March 1.

“They basically want to eradicate a culture.”

Since the 1950s, the waters off Sausalito have been home to a community of free spirits aboard semi-derelict boats known as the “anchor-outs.” But their days now appear to be numbered as local authorities revive a long-unenforced rule that says boats can anchor for no more than 72 hours. Eviction involves dragging the vessels to a shipyard and crushing them to bits. The Guardian

Los Angeles County Sheriff Alex Villanueva is warning of a “mass exodus” in his department as a result of the county’s vaccine mandate. “I have repeatedly stated the dangers to public safety when 20% to 30% of my workforce is no longer available to provide service, and those dangers are quickly becoming a reality,” he said. L.A. Times 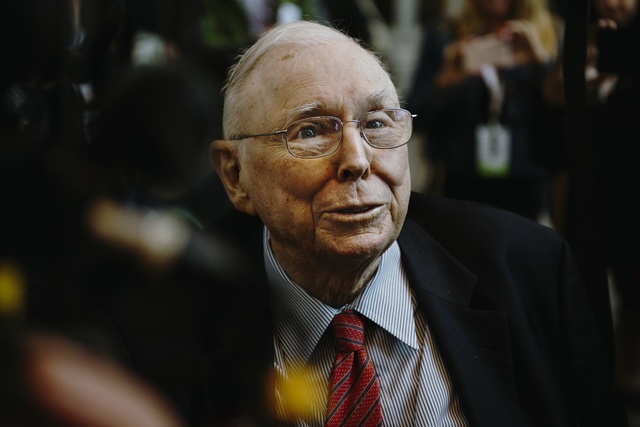 Charlie Munger spoke to reporters in Omaha in 2019.

Charlie Munger, a 97-year-old billionaire, defended himself after news spread late last week that he made a major donation to UC Santa Barbara contingent upon the construction of a massive, mostly windowless dormitory. The project was broadly denounced as akin to a prison. Munger said tastes may vary, but also added: “You’ve got to get used to the fact that billionaires aren’t the most popular people in our society. I’d rather be a billionaire and not be loved by everybody than not have any money.” MarketWatch | Bloomberg

The L.A. Times' Carolina A. Miranda: "There is dumb. There is dumber. And then there is whatever is happening at UC Santa Barbara in the planning and design of a new student dorm."

During a high school football game Friday night, Inglewood High was up 59-0 against Inglewood Morningside after the first quarter and went for the two-point conversion when up 104-0. The final score: 106-0. “It was a classless move,” Morningside's coach said. The school district and the governing body for high school athletics in Southern California condemned the result as unsportsmanlike. L.A. Times | CBSLA

Dick Vitale: "This violates everything you want from a leader of a HS team."

It wasn't until 1932 that a passing pilot noticed six gigantic human- and animal-like figures scraped into the desert floor near California's southeastern border with Arizona. Archeologists dated the Blythe Intaglios to anywhere from 450 to 2,000 years old, but they don't know who created them or why. The comedian Tom Green, who became a van-lifer during the pandemic, made a moody short film with drone views from the intaglios to the abandoned shores of the Salton Sea. YouTube (~10:30 mins) 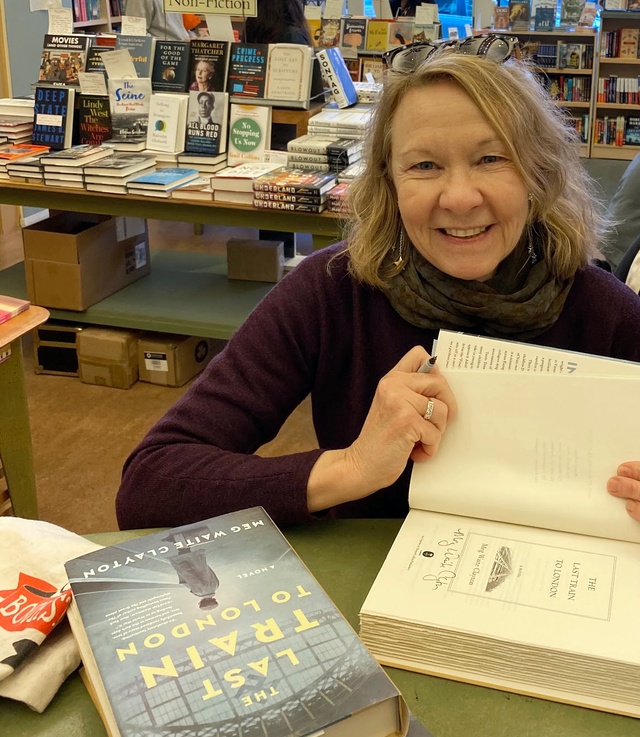 … Meg Waite Clayton, a novelist and author of “The Postmistress of Paris,” which will be published later this month.

A: Your local bookstore! California’s fabulous independent stores — BookPassage, Kepler’s, Books Inc., Mrs. Dalloway's, Vroman’s, Warwick’s, Pages, and so many more. Independent bookstores are where most authors first find their readership, and where readers discover new authors; they are vital to the growth and vibrancy of literature. I love to ask booksellers what they’re reading, and take whatever they recommend out to one of the many unmatched places here for outdoor readers like me: Land’s End in San Francisco or Thousand Steps Beach in Santa Barbara, Point Lobos, or that wonderful spot on the Merced River where it reflects Half Dome.

I’ve been rereading World War II books for inspiration as I make my way into writing a new novel: Anthony Doerr’s “All the Light We Cannot See,” Kristin Hannah’s “The Nightingale,” and “Eva and Otto” by Tom, Kathy, and Peter Pfister.

Other books I’ve read and loved recently, by California writers: Laura Dave’s “The Last Thing He Told Me,” and Karen Joy Fowler’s “Booth,” which Putnam will publish in March.

The chocolate croissants at Carmel’s Lafayette Bakery. Or the almond ones. Or any pastry there.

Steven Spielberg, Kate Winslet, and Nobel laureate Walter Kohn, who taught at UC Santa Barbara until he passed away in 2016. I’d ask Professor Kohn to tell Spielberg and Winslet about how, as a teenager, he was rescued from Nazi-occupied Austria — one of the thousands of children rescued on the kindertransports thanks to Dutchwoman Truus Wijsmuller, who literally faced down a young Adolf Eichmann years before he would go on to devise the Nazi “final solution.” I love writing, reading, and books, but there is nothing like an epic Hollywood movie to get a forgotten heroine like Truus the recognition she deserves.

You recently wrote about your first published opinion piece, a 2011 op-ed on the 30th anniversary of Sandra Day O'Connor's appointment to the Supreme Court. You wrote that, regarding the advancement of women in American politics and business, "the pipeline is slow and leaky, to be sure, but progress is being made." How does that pipeline look now?

There is without a doubt a lot of ugly gunk being tossed in to clog up the progress pipeline at the moment. There will always be people afraid they will lose status if others are allowed to rise. But in the decade since I wrote that piece, women have taken to turning the insults meant to keep us in our place back on the insulters, in part thanks to Elizabeth Warren's words at a rally I happened to be at in New Hampshire five years ago: “nasty women are tough … and nasty women vote.”

The 2016 election was devastating, but what has happened in its aftermath is something. Women have come out to march together. We banded together for #MeToo and #TimesUp. 2020 brought us a female vice president, speaker, secretary of the treasury. More women in Congress than ever. More women making films and TV, which positively affects our perceptions of women and the roles they can fill. There are more women than ever now in professional schools and PhD programs. In business leadership roles and even in tech.

There are certainly challenges remaining, evidenced by the dangerous backlash of the Texas abortion law. We’re still having to dance backwards, but there is some chance that Covid-dressing will have freed us, finally, of the dang high heels.