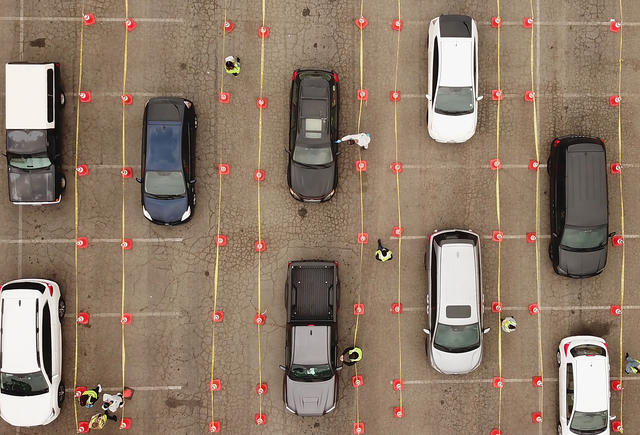 The coronavirus is now infecting more Californians than at any other point in the pandemic. According to an L.A. Times analysis, the state's average daily number of new infections has tripled in the last month. As of Saturday, it was more than 11,500 cases a day. A month ago, it was roughly 3,200. During the height of the summer surge, the average never surpassed 10,000. L.A. Times

Here are the latest California coronavirus totals, as tallied by the COVID Tracking Project. 👇

“This is going to be the worst wave yet. And I don’t think we’ve realized or internalized that yet. I liken it to hurricanes: You see it coming, you know it’s coming, but you think maybe it won’t hit you directly, and maybe the winds won’t be as bad as they say. We should be prepared for a Category 5 hurricane." S.F. Chronicle

For the first time during the pandemic, coronavirus cases in the Bay Area are falling among Latinos while rising among whites. In mid-October, Latinos made up roughly 70% of weekly cases in Marin County. In early November, the figure was about 30%. The data suggests the virus is spreading more freely beyond narrow categories of essential workers to the general community. S.F. Chronicle

"I think it’s going to be mostly a cosmetic effect and not so much a real impact on interrupting this transmission.”

“The virus doesn’t care — day or night. It’s really just a way of getting at behavior modification, but it just seems like an odd one that doesn’t in and of itself address the problem.” 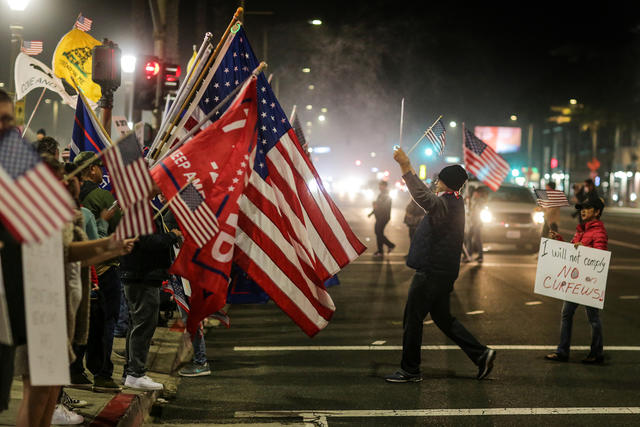 Los Angeles County announced that outdoor dining would be prohibited for at least three weeks starting Wednesday. After being forced to shut down in the spring, the freedom to serve outdoors had been a lifeline to the struggling industry. The new order is now expected to force more restaurants out of businesses. L.A. Times | Eater Los Angeles

"I cannot stress the ineptitude of leadership at every level of government and political party." David Chang, the chef behind the Momofuku empire, posted an impassioned Twitter thread denouncing shutdowns without a safety net in place for employees. @davidchang 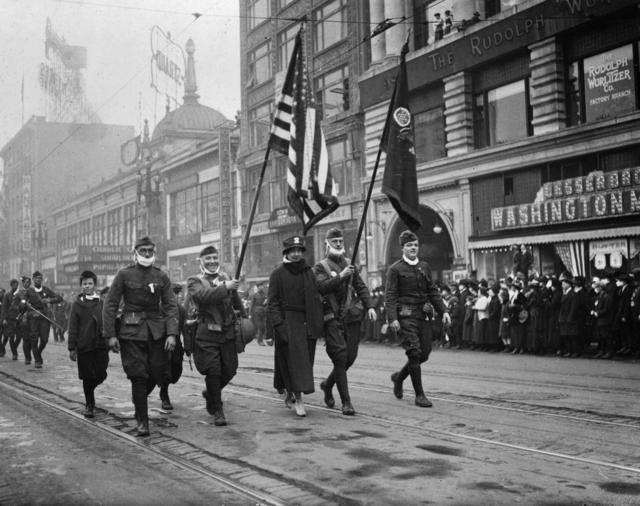 U.S. soldiers marched in a military parade in San Francisco, as the Spanish influenza raged.

On Nov. 21, 1918, after tremendous public pressure, San Franciscans gathered on the streets to celebrate the end of a mask ordinance imposed to halt the spread of the so-called Spanish flu. They tossed their masks onto the streets and packed the bars and theaters. Then the flu roared back in January, nearly doubling the death toll. "History is full of lessons," the Chronicle wrote, "but this one seems to be screaming through the decades, more than a century later, carrying a message for this exact Bay Area moment."

Other coronavirus odds and ends: 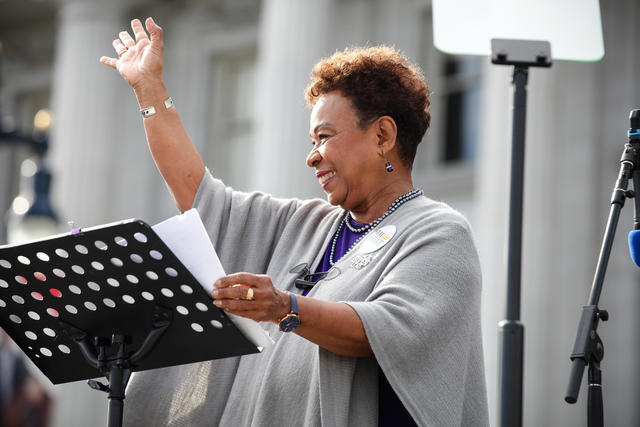 Some would like to see Rep. Barbara Lee, of Oakland, elevated to the U.S. Senate.

Speculation has mounted that Gov. Gavin Newsom wants to name California elections chief Alex Padilla to fill the Senate seat of Vice President-elect Kamala Harris. That has prompted an aggressive campaign to change his mind. Former San Francisco Mayor Willie Brown and other Democratic figures are trying to convince Newsom that the seat should go to another woman of color. Among the favored choices: Rep. Barbara Lee and San Francisco Mayor London Breed. Politico

Early Sunday, Los Angeles recorded its 300th homicide of the year, hitting a benchmark not seen in a decade. There were four killings over the weekend, including the death of a 17-year-old boy riding a bicycle. Homicides have surged across the U.S. this year, while rapes and robberies have fallen. Among the reasons cited: the stresses of the coronavirus and the redirection of officers away from anti-crime programs. L.A. Times | CNN

A Rohnert Park couple converted their sunroom into a sloth habitat with three sloths — Chewy, Sid and Willow. They call it "Sonoma Sloth House," and you can visit for $500. “We never thought we were going to open this to the public," said one of the proprietors. "But we had to adapt or go under during Covid.” Press Democrat

It started with a small bowl of water placed in the backyard, which attracted a litter of coyote puppies. Then Jennifer George, who lives in the Southern California exurb of Vista, installed a water fountain. Since then her backyard has become something of a community water fountain for a menagerie of wildlife — coyotes, skunks, raccoons, opossums, snakes, rabbits, bobcats, and countless kinds of birds. Here's a great highlight reel. 👉 Reddit

… Casey Schreiner, the founder and editor of Modern Hiker and author of “Day Hiking: Los Angeles.” His most recent book is “Discovering Griffith Park.”

A. Manzanar National Historic Site in Inyo County. The landscape is stunning, it’s an easy add-on to any trips out to the Mojave Desert, Death Valley, or the Eastern Sierra, and the National Park Service staff do an excellent job interpreting an important story that more Americans need to be aware of.

I used to listen primarily to news and nonfiction podcasts, but the dual onslaught of Pandemic and Politics in 2020 finally drove me to some terrific longform storytelling podcasts as a reprieve. “Mission to Zyxx” is an improvised sci-fi comedy podcast that plays with tropes familiar to "Star Wars" and "Star Trek" fans and has hands-down the best sound design I have ever heard on a podcast. And “Dungeons & Daddies” is a hilarious and heartfelt improvised podcast about a group of dads who get sucked into the Forgotten Realms of Dungeons & Dragons on their way to soccer practice and have to rescue their kids and find a way home.

I’ve spent the last seven years in the Thai Town neighborhood of L.A. Obviously, it is not short on excellent thai food. Coming back from field work for my book “Discovering Griffith Park,” I’d often stop in at the New Hollywood Plaza for eats. Everything is terrific in that plaza, but cash-only Ruen Pair is my favorite. Best papaya salad in Thai Town! If you have room when you’re done, cross the plaza for dessert at Bhan Kanom Thai.

Oh man, this is a tough one, but here are three:

Will Thrall — One of the earliest modern hiker-historians of the San Gabriel Mountains near Los Angeles; longtime editor of “Trails” magazine

For a conversation starter, how about “What makes someone a Californian?” 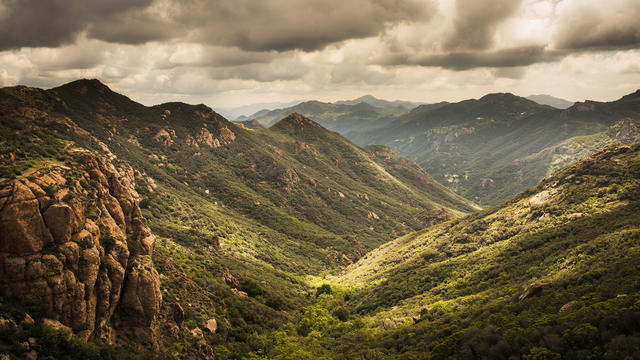 A view from the Mishe Mokwa Trail to Sandstone Peak.

My all-time favorite hike in California is a moderate 6-mile loop to Sandstone Peak, the highest point in the Santa Monica Mountains, via the Backbone and Mishe Mokwa Trails. It’s one of the few hikes I go out of my way to repeat, often multiple times a year. Every season offers something different, and I truly think it has a little bit of everything that makes hiking in Southern California so wonderful.