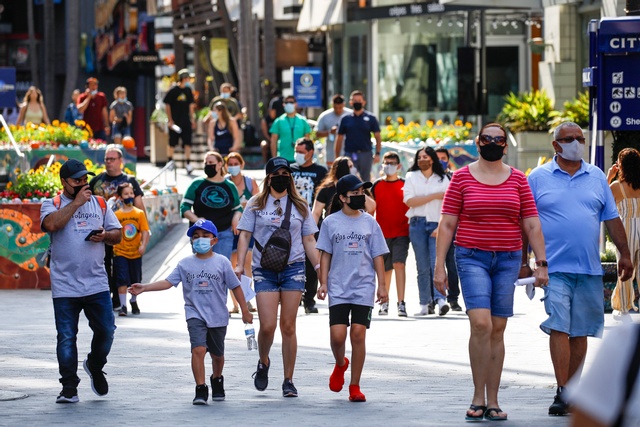 People packed into Universal CityWalk on Tuesday, with many keeping masks on.

"Thank god this is over."

On Tuesday, Californians streamed into Disneyland, sat side-by-side at Dodger Stadium, and danced to DJ music atop a peak in San Francisco as they shrugged off 15 months of pandemic restrictions. But not everyone left their masks at home. In many cases, people cited not concerns about safety, but social etiquette. “When I see everybody else wearing one I feel naked," a Sacramento woman told CBS13, "like I should probably put mine on too.” Mercury News | A.P.

Avoiding the charged phrase "vaccine passport," Gov. Gavin Newsom on Tuesday said California would introduce a vaccine verification system that would help businesses confirm whether customers were inoculated against the coronavirus. Newsom said they would be digital cards stored on phones. "It’s not a passport. It's not a requirement," he said. "It's just the ability now to have an electronic version of that paper version. SFGate.com | S.D. Union-Tribune

Reversing itself, the University of California said vaccines would be mandatory for students in the fall. S.F. Chronicle 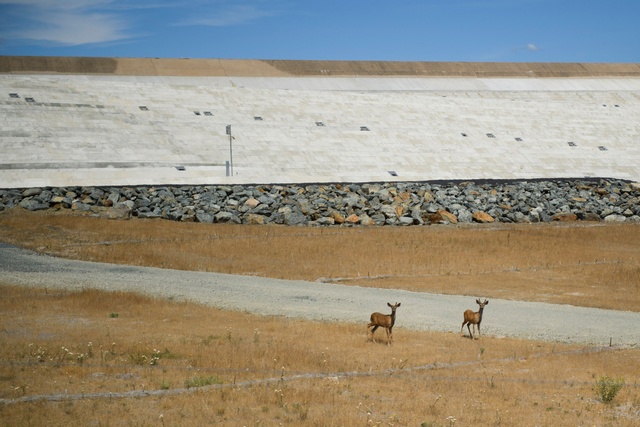 A pair of deer wandered near Oroville Dam last month.

The drought gripping California is not only sapping water supplies: Low reservoir levels mean hydropower supplies are also tumbling. At a time when punishing summer heat waves threaten to stress the power grid, the state's hydropower output has fallen to the lowest in more than five years. “California," an analyst said, "is walking a tight rope.” Bloomberg

MacKenzie Scott, the ex-wife of Amazon founder Jeff Bezos, announced that she had given away $2.7 billion, a significant portion of which went to organizations across California. They included Homeboy Industries, the Japanese American National Museum, the East Bay Fund for Artists, and a number of community colleges and Cal State campuses. Remarkably, Scott's wealth is growing faster than she can dispense it. In 2019, when she pledged to give away her fortune, her Amazon shares were valued at $36 billion. Today she is worth $60 billion. N.Y. Times | Medium 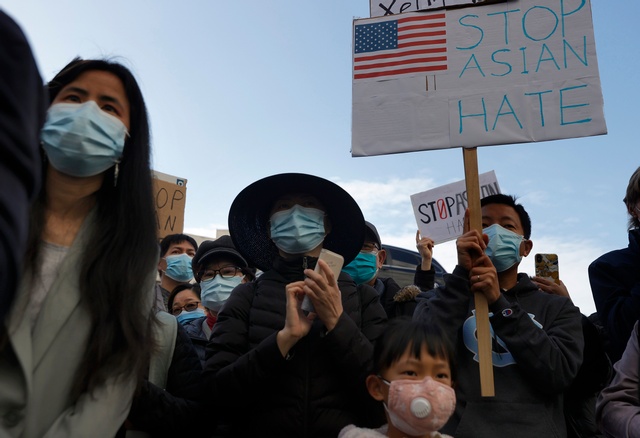 A rally against anti-Asian hate in San Francisco in March. Attacks on Asian Americans have fueled criticism of District Attorney Chesa Boudin.

In a column titled "The bogus backlash against progressive prosecutors," the opinion writer Radley Balko challenged a common narrative that San Francisco District Attorney Chesa Boudin is allowing criminals to run amok. Balko cited a viral ABC report that claimed Boudin dropped charges against a juvenile accused of assaulting a 75-year-old woman. It wasn't true. James Queally, a Los Angeles police reporter, called Balko's piece "as stark of an indictment of local TV coverage of the criminal justice reform movement as you're ever going to see." Washington Post | SFist

California's drought may have solved the mystery of a 1965 plane crash. With Folsom Lake near Sacramento now shriveled to roughly 37% of capacity, an underwater surveying company discovered a plane propeller and tail that matched the description of a lost Piper Comanche 250 that fell into the water after a midair collision. The discovery has given hope to family members that they may get to finally lay to rest three victims whose bodies were never found. SFGate.com | The Guardian 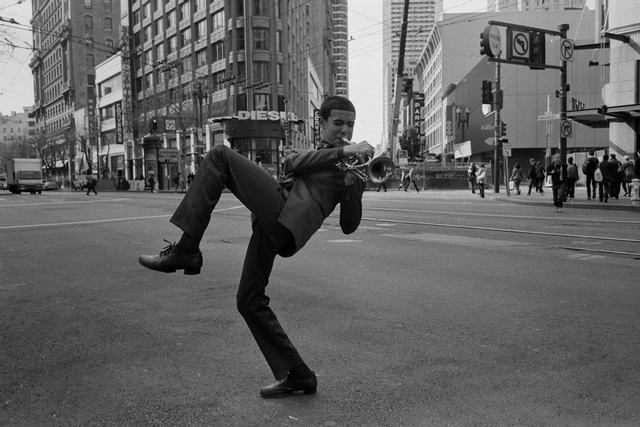 The photographer Troy Holden has said he is drawn to odd moments, which makes the downtown streets of San Francisco a sort of artistic heaven. Vantage magazine once called Holden the best street photographer in the city, "taking some of the rawest, life-affirming, and emotion-crushing images of public life that San Francisco knows." Vantage | @tholden415 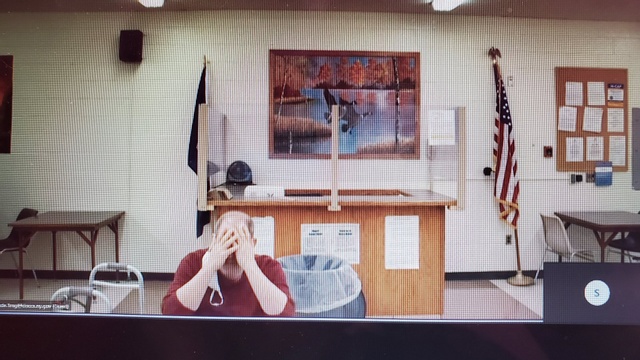 Harvey Weinstein reacted after a judge denied his request to delay extradition.

Harvey Weinstein, currently serving time in a New York state prison for rape, is expected to arrive in Los Angeles within a few weeks to stand trial on charges that he sexually assaulted five women. The disgraced movie producer fought to postpone extradition on medical grounds, but a New York judge on Tuesday denied the petition. Weinstein dropped his head as the ruling was issued. L.A. Times | N.Y. Times

When Covid-19 hit last year, the Los Angeles City Council issued a moratorium on homeless tent removal. Since then, camps, trash, and crime have transformed the Venice boardwalk, home to the county's largest concentration of homeless people after Skid Row. So last week, Sheriff Alex Villanueva, who doesn't answer to the council, arrived in a cowboy hat and declared he would clear everyone out by July 4. He gave an ultimatum: accept services, leave, or be arrested. LAist

The helitanker can carry up to 3,000 gallons, far more than other helicopters, slurping up water from lakes with a snorkel between drops. Officials announced this week that Southern California fire agencies were adding two of the Chinooks to their arsenal — just as a potentially awful fire season ramps up. A.P. | O.C. Register 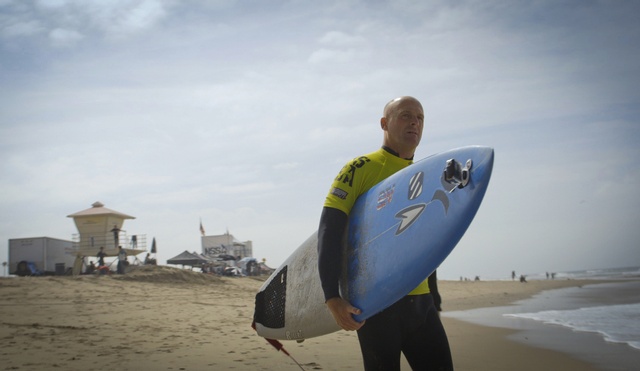 "Everybody that surfs in Southern California knows Curt — he's famous."

After Curt Harper was diagnosed with autism at the age of two, doctors told his parents they would need to institutionalize him. They didn't. Given a chance to find his place in the world, Harper became a beloved fixture of Santa Monica's surfing scene, chauffering young surfers to the shore when their parents can't make it. This short film about him, titled "Curt," will make you love him too. Vimeo (~17 mins)

Believe it or not, the hassle of parallel parking was solved more than 80 years ago. In 1938, an energetic Bay Area lumberman named Brooks Walker patented a device that would drop a wheel perpendicular to the others from the trunk of a car, allowing it to swivel in and out of tight parking spaces.

Yet no one bit. “I guess I’m not a very good salesman,” Walker told the San Francisco Examiner years later. There were notable drawbacks too: the hydraulic contraption required fuel tanks to be repositioned and all but eliminated a car’s trunk space.

Even if the fifth wheel didn’t catch on, it did ease Walker’s own parking headaches. He drove his own modified Cadillac Sixty Special more than 100,000 miles.