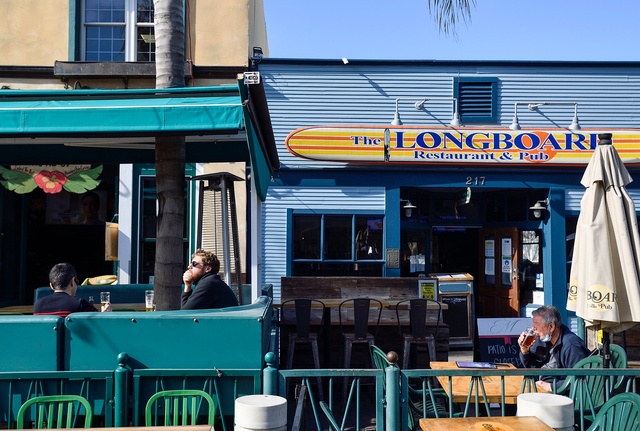 The San Diego Zoo prepared to welcome back visitors.

And restaurants got the go-ahead to reopen outdoor dining across much of the state.

Small businesses celebrated Monday after Gov. Gavin Newsom lifted a stay-home order that had deepened the despair of many owners already buried in debt from the pandemic. “Today we can lay claim to seeing some real light at the end of the tunnel,” he said. S.F. Chronicle | L.A. Times

The governor's move was an abrupt change of heart amid intense political pressure. But he insisted it was data driven, citing models that showed rising ICU availability. A.P. | Long Beach Post

California has administered 2.4 million vaccine doses. Over the weekend, Placer County officials publicized the death of one person who had gotten a shot hours earlier. The story rocketed around the globe, picking up headlines everywhere from the Wall Street Journal to the Punjab News Express. But the cause of the death remains unknown. Critics have accused local officials of recklessness for announcing the case before an inquiry was complete, potentially sowing unnecessary doubts about vaccine safety. Sacramento Bee | SFGate.com 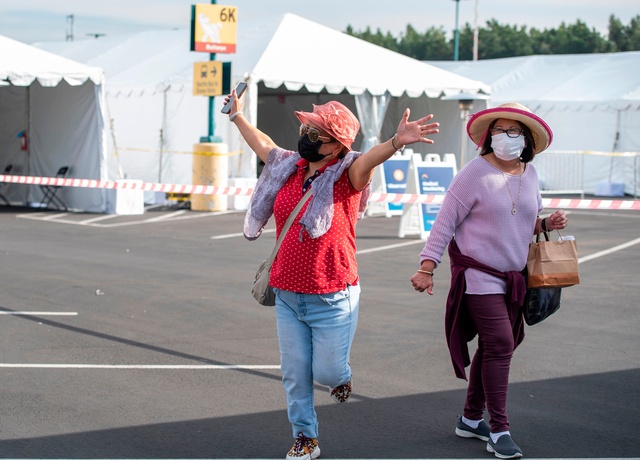 People reacted after getting Covid-19 vaccinations in Anaheim on Jan. 13.

California announced a reshuffling of vaccine eligibility guidelines on Monday that will prioritize age over occupation. Health care workers, teachers, and farmworkers will remain near the front of the line. But in the next phase, occupational categories will be scrapped as another age group is prioritized, possibly those over the age of 50. L.A. Times | A.P.

The state unveiled a new website that will let Californians sign up for alerts on eligibility. 👉 Myturn.ca.gov

State legislative leaders have agreed to extend a moratorium on evictions — due to expire next week — through the end of June. Judicial officials anticipate roughly 240,000 new eviction filings this year, double what occurs in normal years. The new proposal would also use federal relief funds to pay off up to 80% of some tenants' unpaid rent. “It’s one thing to get protections, and it’s another to be able to pay your rent when it is due,” Newsom said. The Guardian | CalMatters

California paid a dizzying $11.4 billion in fraudulent unemployment benefits to hackers, identity thieves, and foreign criminal rings over the last year, officials said Monday. Another $20 billion is considered suspicious. Law enforcement officials have called it the biggest fraud investigation in California history. “There is no sugarcoating the reality,” California's labor secretary said. “California did not have sufficient security measures in place to prevent this level of fraud, and criminals took advantage of the situation.” A.P. | S.F. Chronicle 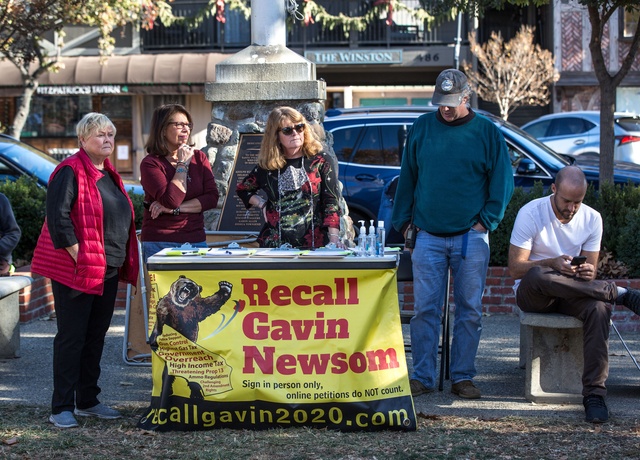 Recall activists say they have gathered 1.2 million signatures in a campaign to oust Gov. Gavin Newsom that once seemed like a pipe dream. They need 1.5 million by March 17 to get on the ballot. The only recall in California history was in 2003, when Arnold Schwarzenegger replaced Gray Davis, whose job approval at the time was 26%. Newsom had a 57% approval rating in November. The Hill | Wall Street Journal

Newsom was asked Monday whether his move to lift the stay-home order had anything to do with the recall effort. "That's complete and utter nonsense," he said.

L.A. County's new district attorney, George Gascón, has told prosecutors to stop seeking the death penalty, trying juveniles as adults, and seeking prison terms beyond the normal range. They're not happy. Rank-and-file prosecutors are trying to block Gascón in court, and district attorneys in other counties have said they will not share cases with him. “You can’t just use the law to implement your personal worldview of what society should look like,” one leading prosecutor said. Politico 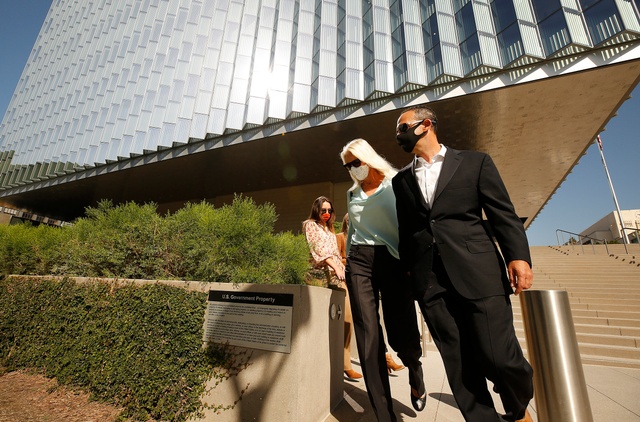 Mitchell Englander left court with his wife in Los Angeles on July 7.

In 2017, a businessman seeking opportunities in Los Angeles treated a City Council member, Mitchell Englander, to a lavish night out in Las Vegas. Among the perks, according to prosecutors: an opulent hotel room, an envelope stuffed with $10,000 in cash, and an escort sent to his room at the end of the night. On Monday, Englander was sentenced to 14 months in prison for lying to the FBI about the episode. In court, he apologized to his wife and two daughters. "I’ve hurt the very people I love the most," he said. L.A. Times | LAist

Roughly 5,000 people were ordered on Monday to evacuate communities in the fire-scarred Santa Cruz Mountains, where an approaching atmospheric river threatened to set off debris flows. Revised forecasts called for up to 10 inches of rain in the region. “There’s going to be a lot more moisture than we had thought,” a meteorologist said. “It’s been quite some time since we’ve seen a storm like this.” Mercury News | Lookout Santa Cruz 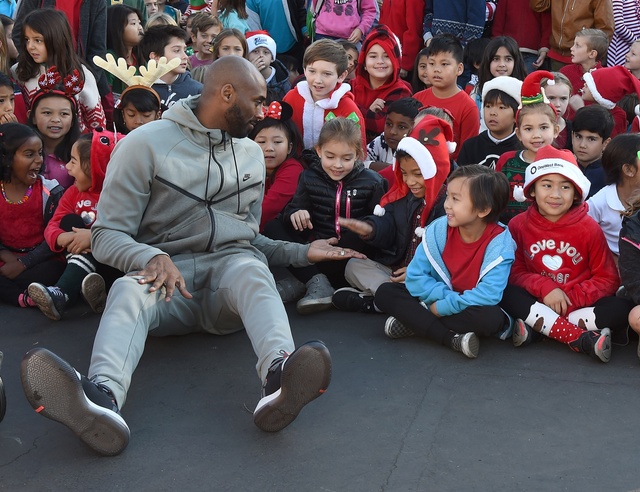 Kobe Bryant surprised students at a Mission Viejo school in 2018.

Kobe Bryant died in a helicopter crash along with his 13-year-old daughter, Gianna, and seven others one year ago today. He was just 41. One of basketball's greatest all-time players was also a major force off the court. BuzzFeed put together a great collection of photos showing Bryant in moments of charity and kindness with young fans.

In the early 1900s, it was boom times in Southern California, and the place to be on the weekend was the boardwalk in Long Beach. The Pike, commonly known as "the Coney Island of the West," was an amusement zone that rose around the terminus of an electric street car line from downtown Los Angeles. Families streamed in by the hundreds for rides, carnival games, fortune tellers, and cool ocean air, while young men — including throngs of sailors on shore leave — sought out peep shows and gambling.

In time, however, the boardwalk's allure began to fade. A watershed moment came in 1955, when Disneyland opened a few towns over. The Pike became yesterday's news. After a few failed attempts to revive the old glory days, the area ultimately gave way to an outlet complex with a Gap, H&M, and Restoration Hardware. Los Angeles Almanac | KCET

Pictured below is a fantastic image of the Pike from its 1910 heyday, when a day at the seaside was an occasion for tailored suits and lavish, floral hats. The colors were added by the Swedish photo colorist Sanna Dullaway. You can almost smell the salt water taffy. 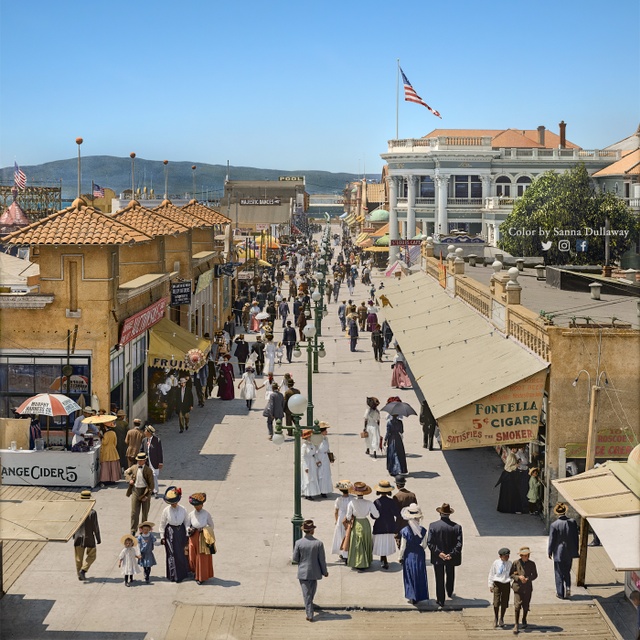 See a large version of the photo here, and a few close-ups at Dullaway's Instagram. 👉 @sannadullaway