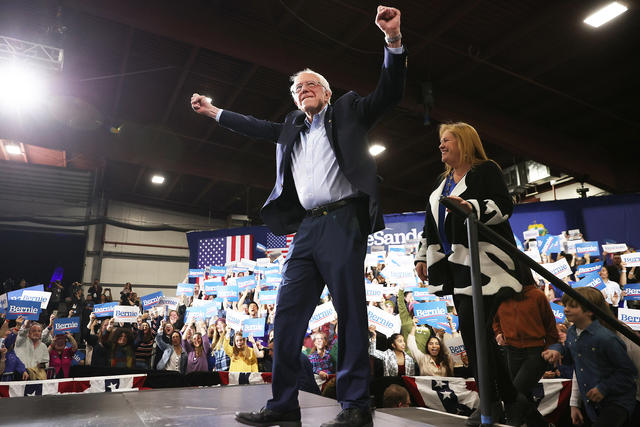 Bernie Sanders it is.

No Democratic presidential candidate worked harder to court California, the marquee prize of Super Tuesday, and it paid off as early results projected a potential rout for the Vermont senator, at 33 percent of the vote. The effect was to blunt the resurgence of Joe Biden, who steamrolled across the South and picked up a stunning victory in Minnesota.

A crucial question: whether any other candidates can crack the 15 percent threshold in California to collect at least some of the state's trove of 415 delegates. Biden seemed likely to, and Michael Bloomberg could as well. But final delegate numbers won't be sorted out for days, if not weeks. L.A. Times | Politico

All of California's 53 congressional districts held primaries on Tuesday, with the top two vote-getters advancing to the general election in November, regardless of party. Few were particularly contentious. Among the high-profile races was the contest for the seat vacated by Duncan Hunter, a San Diego-area Republican convicted of campaign finance violations. Early results showed the lone Democrat, Ammar Campa-Najjar, leading former Rep. Darrell Issa. S.D. Union-Tribune | A.P.

Another hard-fought battle was playing out for the Los Angeles-area House seat vacated by Katie Hill, a Democrat who resigned over accusations she had inappropriate relationships with staffers. Hill had flipped the GOP-held district in 2018. In a crowded field, early results showed a Democratic assemblywoman, Christy Smith, with a narrow edge over a Republican former Navy pilot, Mike Garcia. L.A. Times | A.P.

Proposition 13, which would have created the largest school bond in state history at $15 billion, was trailing in early returns as 57 percent of early voters said "no." A loss would force education officials to find new ways to upgrade aging facilities. Critics called Proposition 13 a giveaway to developers. S.F. Chronicle | A.P. 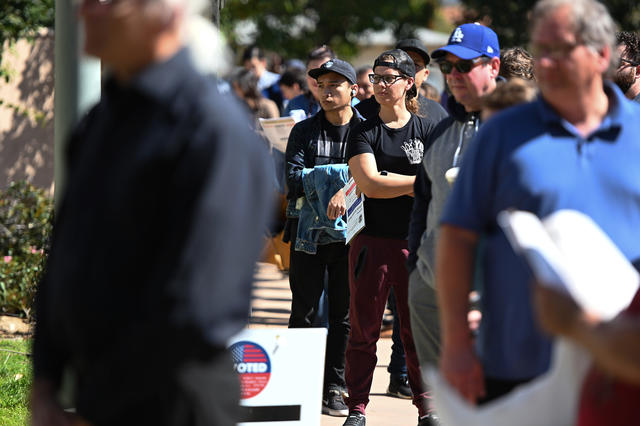 A line stretched long in Burbank on Tuesday.

"I prefer the old system, it was just easier."

Los Angeles voters waited in lines as long as two hours as the city struggled to navigate a new polling system meant to modernize voting. Dean Logan, the county's registrar of voters, apologized over the problems and Sanders filed an emergency motion to keep polls open two hours past the official closing time of 8 p.m. That didn't happen. Fox 11 | L.A. Times

Delays were also reported in more than a dozen other counties. S.F. Chronicle | Fresno Bee

A candidate for Superior Court judge in Los Angeles County tried to fool voters by having his name legally changed to "Judge." Judge Mike Cummins really is a former judge, but he wasn't allowed to use the designation on the ballot. So he came up with a workaround. The gambit didn't appear to be paying off. He was losing badly. L.A. Times 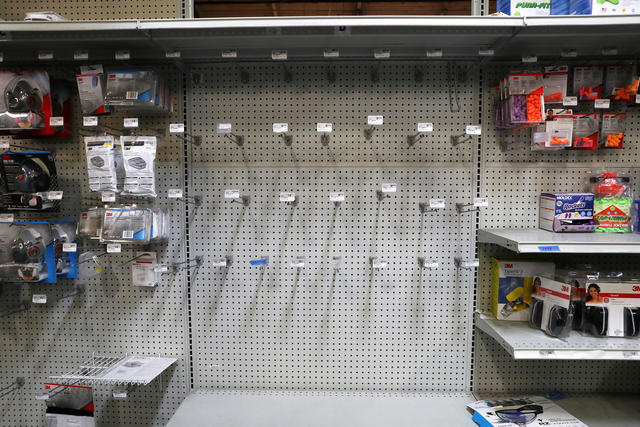 A hardware store was cleared out of protective masks in San Rafael.

New coronavirus cases were confirmed in Orange County and Berkeley as the state's total number of cases climbed above 50. The latest developments:

Eight Los Angeles County Sheriff's deputies are facing disciplinary action after they were accused of sharing graphic photos of the helicopter crash that killed Kobe Bryant and eight others. Sheriff Alex Villanueva said he was disgusted to learn about the violation and had reached out personally to the families of victims to apologize. CNN

The leadership of the sheriff's department tried to keep a lid on the episode for nearly five weeks, sources told the L.A. Times.

The mother of Syed Rizwan Farook, a terrorist who killed 14 people in a 2015 attack on a Christmas party in San Bernardino, has agreed to plead guilty to shredding a map that connected her son and his wife to the massacre, prosecutors announced. The crime carries a potential 20-year sentence. San Bernardino Sun | A.P. 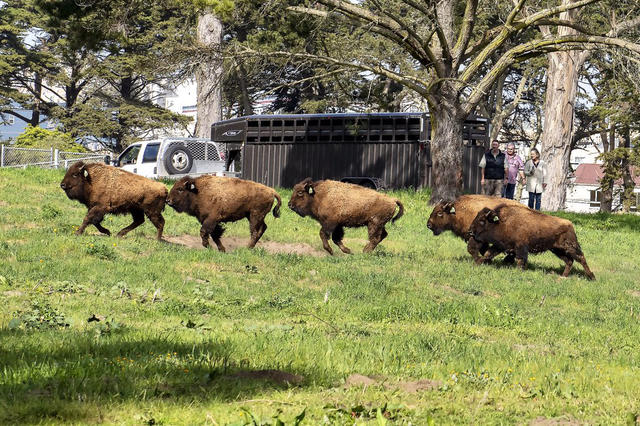 The five baby bison were rescued from a Northern California commercial bison ranch.

Five young bison have joined San Francisco's Golden Gate Park, doubling the population of the shaggy-haired behemoths in time for the park's 150th anniversary. Bison have roamed an enclosure at the park since the 1890s, part of conservation efforts to keep them from going extinct. SFist | S.F. Chronicle 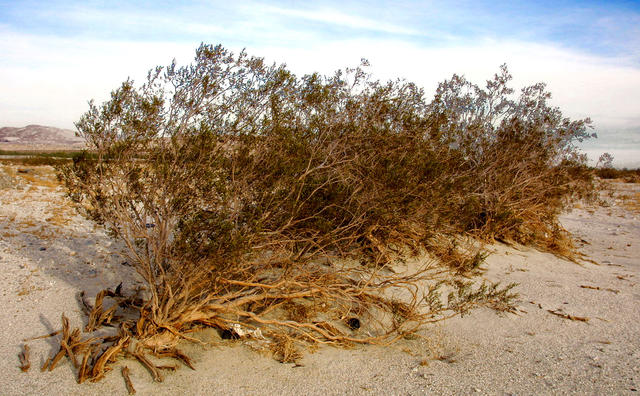 The King Clone, in the desert south of Barstow, is unfathomably old.

About 11,700 years ago, the last Ice Age was petering out, woolly mammoths still roamed the earth, and a tenacious little shrub sprouted in the Mojave Desert. Known as King Clone, the plant is still alive today and is regarded by some scientists as the oldest living thing on Earth.

A creosote, the desert shrub achieved its longevity through incredible tolerance of drought along with an unusual strategy of self-cloning. From an original plant, the creosote continually reproduces itself in an outward direction, forming a circular colony from the same roots around an ever-growing bare patch at the center.

Expanding at less than a millimeter a year, the ring of King Clone is now 75 feet across. 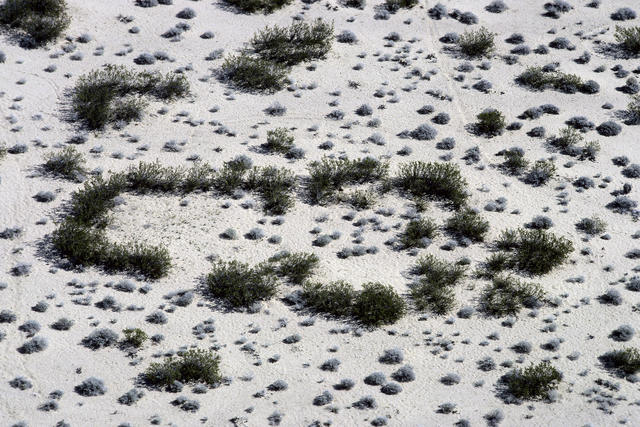 King Clone spread outward as it cloned itself, forming a circle.

Yet venture to the tract of desert 40 miles south of Barstow where this marvel of nature resides and you won't find any viewing platforms or tour groups. The oldest organism on the planet is protected by a skimpy wire fence off the side of a narrow dirt road. Instagrammers sometimes walk right inside the perimeter of King Clone to snap pictures.

Discovered in the early 1970s, the plant was protected by the state in 1993 within the King Clone Ecological Reserve. But aside from niche scientists and lovers of the desert, the site has failed to arouse much public interest. Asked why, Jim Cornett, a desert biologist, cited the star power of California's other ancients, the bristlecone and giant sequoia. "We're kind of funny," he said. "If something is taller than we are, we start to get impressed."

King Clone isn't just stubby. It's downright scraggly. If sequoias seem to prop up heaven itself, the lowly creosote looks more dead than alive. Still, King Clone likely has many more years ahead of it. There's of course no way to confidently predict when the plant might finally meet its end. "But in theory," Cornett said, "it would go on living indefinitely."