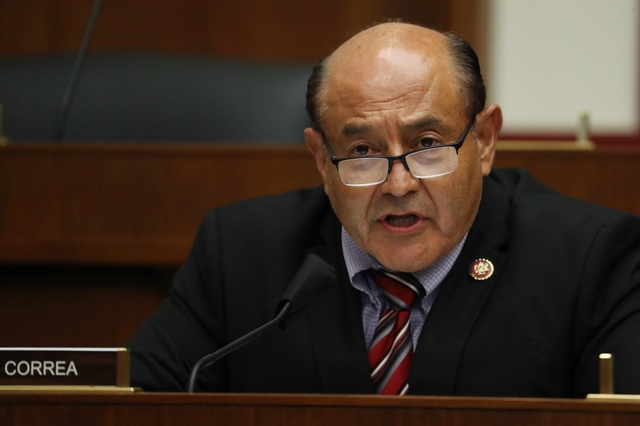 A major obstacle has emerged in the legislative effort to curb the dominance of Apple, Facebook, and Google: California lawmakers. A bipartisan group that includes Reps. Lou Correa, Zoe Lofgren, Ted Lieu, and Darrell Issa has warned that the antitrust measures unfairly single out individual companies and could disrupt the economy. The lawmakers have another thing in common: Many are recipients of large donations from tech companies. Politico

A Bay Area county became perhaps the first in the state to break out its data of coronavirus infections by vaccinated vs. unvaccinated patients. A stark disparity emerged: The unvaccinated population is getting infected at a rate 10 times that of the inoculated population. “It’s really a tale of two counties,” said Dr. Chris Farnitano, Contra Costa’s health officer. The data echoed national statistics, which show that nearly all coronavirus deaths in the U.S. are now among the unvaccinated. S.F. Chronicle 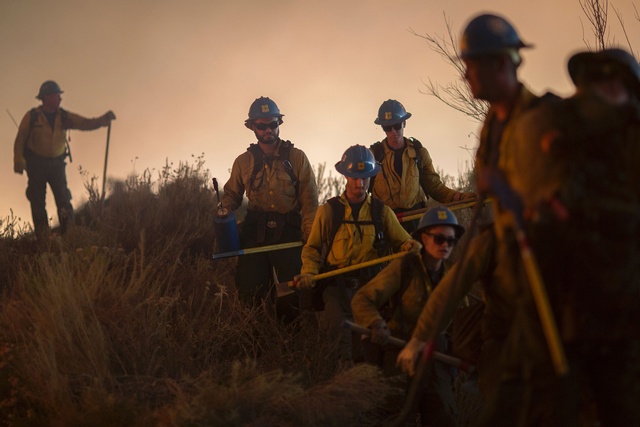 Kathleen Abraham, 61, an energy healer and crystal practitioner from Orange County, saw at least a dozen people in her spiritual circle get pulled into the QAnon belief system. “It’s a deep, painful heart hurt," she said. "It’s just really sad to lose so many people. But it just got to the point where I had to let them go.” The L.A. Times chronicled how a segment of California's New Age community has embraced the idea that a cabal of Satan-worshiping pedophiles is taking over society.

Wells are drying up in increasing numbers across the North State. A broadcaster visited an 82-year-old woman on the verge of losing a home in her family for five generation as the property's well nears empty. She fell to tears as she talked about watching her plants die. "Everything here is doomed to die," she said, "and that is the hardest, hardest thing. And I’m not the only one that’s going to lose everything.” KRCR

Sonoma County's Russian River is strained like no time in its recorded history. The Press Democrat published dramatic photos. 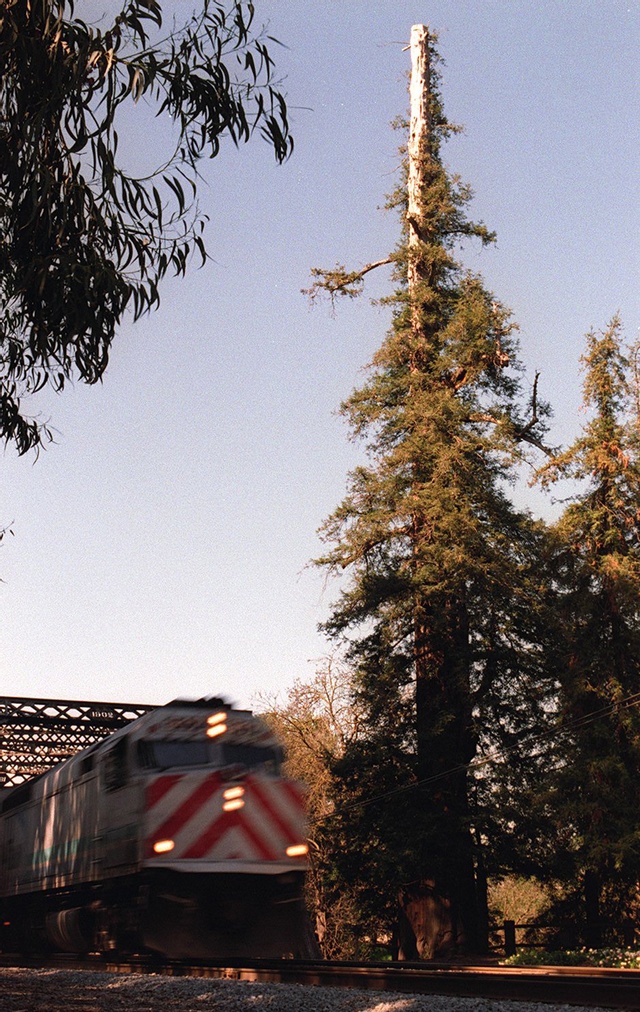 A train passed by the El Palo Alto redwood in Palo Alto.

The El Palo Alto redwood is the pride of Palo Alto, which took its name from the tree. At 1,081 years old, it might have died by now had the city not developed a special affection for it, going so far as to install a plumbing system to bathe the tree in fog-like mist. Now, foresters say one last rescue effort will ensure El Palo Alto's future: a plan to electrify a nearby rail line, ending a century of coal and diesel smoke from passing trains. N.Y. Times

The battle of the Flintstone House is over. In 2019, the wealthy town of Hillsborough sued Florence Fang, a resident, over her choice of lawn decorations, which included 15-foot-tall metal dinosaurs and giant letters reading "Yabba Dabba Doo." Fang countersued, alleging racial discrimination. Now, the parties have reached a quiet settlement. The dinosaurs get to stay and Hillsborough will pay Fang $125,000 to cover her legal costs. Palo Alto Daily Post | The Guardian 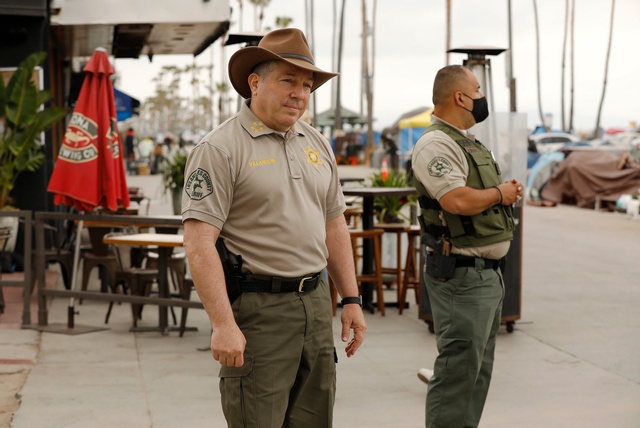 When people speak of Venice Beach as an open-air asylum, they are not exaggerating, wrote the L.A. Times' Robin Abcarian. So when Sheriff Alex Villanueva swooped into the neighborhood and vowed to clear the boardwalk of homeless people and their tents by July 4, the columnist had an uncharacteristic reaction: "It pains me to say this, since our sheriff sometimes behaves like a lawless rogue, but maybe his grandstanding will pay off for the many long-suffering people of Venice Beach."

In the 1950s, an artificial island was built off the Ventura County coast for the specific purpose of oil drilling. But the boom years faded, and the owner, RILP, let Rincon Island fall into disrepair. Then the company declared bankruptcy, leaving the cleanup to California taxpayers, who have so far paid $27 million. The story of RILP is a harbinger of what's to come, experts say, as companies exploit bankruptcy to shed responsibility for thousands of idle wells. Desert Sun

As if the world's greatest weather wasn't enough, San Diego is also: 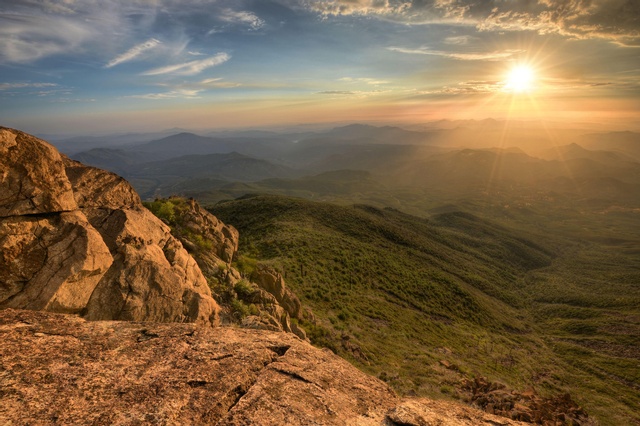 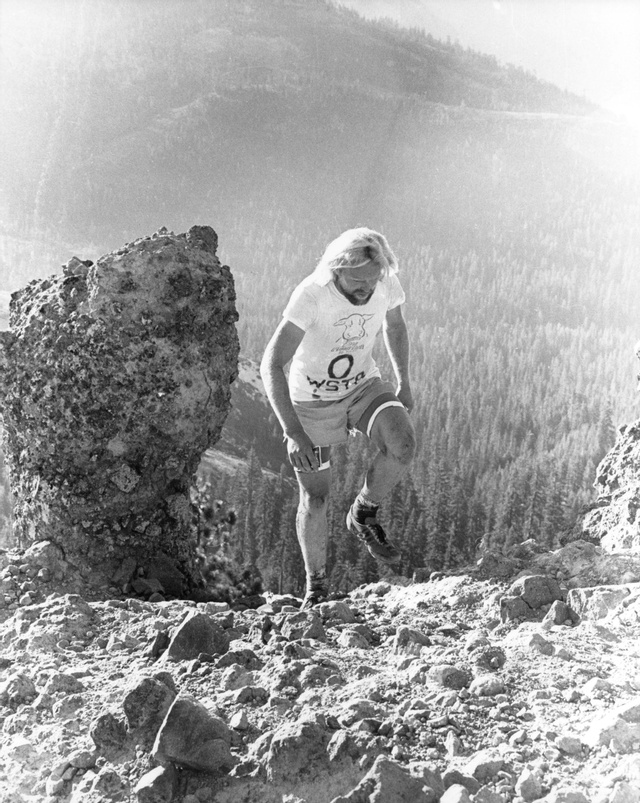 The Western States ultramarathon, a yearly act of insanity in the northern Sierra Nevada, wrapped up on Sunday.

The event began in the 1950s as an endurance horse ride in which competitors had to traverse the equivalent of nearly four marathons along murderous terrain from Lake Tahoe to the foothills town of Auburn in less than 24 hours. Then in 1974, a shaggy-haired woodcutter from Gold Country named Gordy Ainsleigh showed up to the starting line in his sneakers — no horse.

At the time, running the course was considered by some to be beyond human ability, and Ainsleigh, 29, seemed hardly the sort to pull it off. He was big, standing 6'4" and more than 200 pounds. He had run track in school, but was no great talent. His obsession with running, he told WBUR, had grown out of feeling like a misfit:

"I remember this one day — I think it was second grade. I came out on the playground with a bag lunch. Grandma had packed the lunch, and I just couldn't see anybody I could go up to and say, ‘You want to have lunch?’ I panicked. And I just felt like I couldn't breathe. And I just dropped my lunch, and I ran home for lunch."

Ainsleigh found peace in running. But by around mile 55 of his Western States attempt, he thought be might die. The temperature rose to triple digits. “There’s a dead horse in the canyon, and that could be me,” he told a friend at a checkpoint, according to Runners World. “I’m going to quit.” Yet somehow he kept moving. Fueled by canned peaches and water from a creek, Ainsleigh eventually found himself in Auburn with only minutes to spare. He dove into a somersault as he crossed the finish line.

Ainsleigh had run nonstop for 23 hours and 42 minutes. The next year, another runner crashed the course, and by 1978, dozens of runners were attempting it. In time, the Western States 100 became the world’s premier ultramarathon trail race, drawing top runners from around the world. Ainsleigh, now 74 and still running 100-milers, has watched with satisfaction as the sport he helped popularize produces athletes of a caliber unimaginable to many in the 1970s.

The fastest time on Sunday, by Jim Walmsley of Arizona: a blistering 14 hours, 46 minutes. 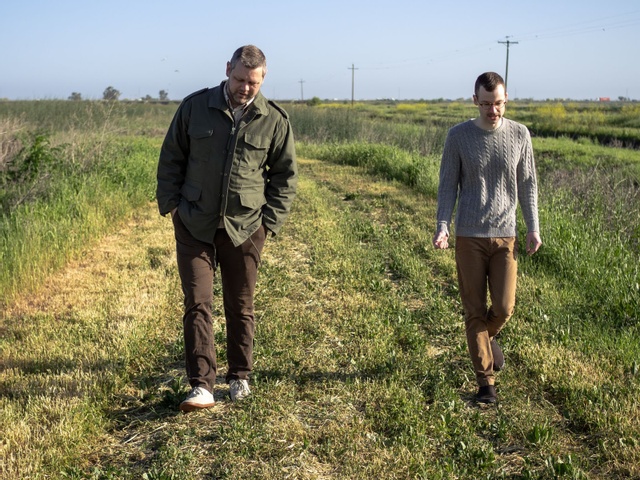 … Morgan Fox, above right, one half of the Sacramento duo Blank Gloss, whose dreamy instrumental album "Melt" was released on June 18.

A: A redwood forest. My personal favorite is Humboldt Redwoods State Park, but any area with big old redwoods is a winner in my book. There is nothing quite like being surrounded by absurdly large trees.

What’s the best album by a California artist that you've heard recently?

I've really been enjoying the new Suzanne Kraft album, "About You." He's one of my favorite musicians and this new one is a great warm weather record full of hazy, weightless love songs. It's a pretty significant departure from a lot of the new age and dance music he's released in the past, but it just goes to show that he works well in any genre.

There's a little restaurant here in Sacramento called Pizza Supreme Being that is truly something special. The menu is small, but the pizzas are huge and so delicious. They do everything really well. Their naturally leavened crust is the best I've ever tasted. If I could only have one pizza for the rest of my life, it would be their plain cheese pie. It's perfect.

I'd invite John Cage because he is a huge inspiration to me and it seems like he was very friendly and nice to talk to. I'd also invite Jerry Hsu who is one of my favorite skateboarders and a rad photographer. And even though Huell Howser wasn't from California, he will forever be a prominent California figure to me. He'd be getting an invitation for sure. I would hope that the food would be good enough to start the conversation, but if not, I'm sure Huell could handle it.

Are there any specific ways in which the composition of your new album was informed by California?

Absolutely. We made our new album during a heatwave last summer, which not only led to the title, "Melt," but I also feel that the dry California heat made its way into some of the music. We didn't set out to make a record informed by Sacramento's triple-digit temperatures, but listening back to the finished product, I can certainly understand why people have said that it conjures images of sprawling western terrain and arid landscapes.