California Democrats say they are prepared to provide up to $600 a week in extra benefits to jobless Californians if Congress fails to extend supplemental payments that began in April. Those weekly checks, also $600, expire this month. “The last thing we should do is exacerbate our homeless problem," Assemblyman Phil Ting said. "We don’t need thousands more Californians on our streets today.” S.F. Chronicle | L.A. Times 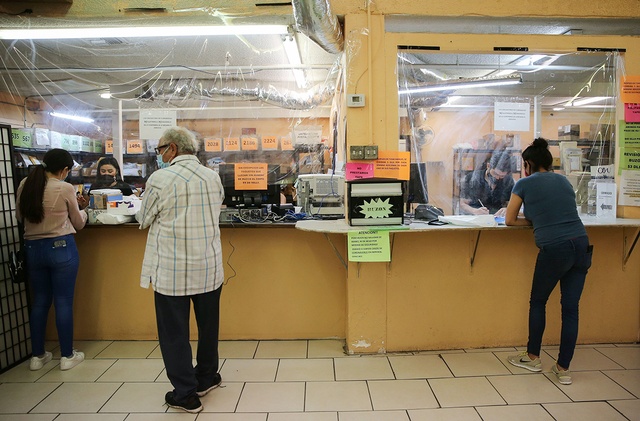 People lined up at a bookkeeping shop in Calexico, which has been hard-hit by the coronavirus.

In California's southeastern corner, nearly everyone knows or knows of somebody with Covid-19. Imperial County was already at a health disadvantage before the pandemic, saddled with the state's highest rates of diabetes, heart disease, and obesity. “When you have a population with those preexisting conditions and you throw Covid-19 on top of it, you have a problem,” a medical professional said. L.A. Times

Imperial County's main hospital is so overrun that it is using portable military-style tents in the triple-digit heat. The Intercept

The board of education of Orange County voted to sue Gov. Gavin Newsom over a state order barring schools from opening in counties at high risk of coronavirus transmission. The board made national news this month after it urged schools to open on time without social distancing or face masks. The coronavirus has been surging in Orange County; nearly a quarter of its cumulative cases have occurred in the last two weeks. Voice of OC 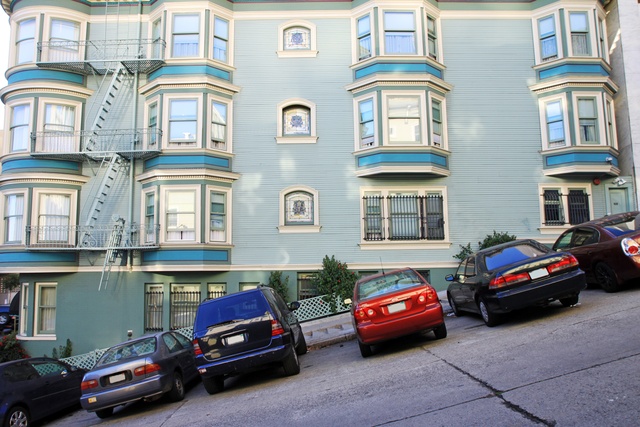 San Francisco’s household emissions were less than half of the national average.

A major study on carbon emissions found that California households are the greenest in America — by far. Homes here emit 33% less carbon than those of any other state. Some zip codes, however, deserve little credit. In Beverly Hills, for example, the average person put out four times as much greenhouse gases as someone living in South Central Los Angeles. The researchers cited home size as a crucial factor. Mercury News | A.P.

An Associated Press photographer zoomed in on handwritten notes held by Joe Biden as he took questions from reporters on Tuesday. "Kamala Harris" was written across the top. Below that: "Do not hold grudges." "Campaigned with me & Jill." "Talented." "Great help to campaign." "Great respect for her." Biden said he would pick his running mate next week. Politico | A.P.

Back in 2004, Google co-founder Larry Page said the goal of the search engine is to get users "to the right place as fast as possible.” A new analysis found that the right place, according to Google, often turns out to be Google. More than 40% of the first-page results for more than 15,000 recent popular queries were taken up by Google content and products. The Markup

Facebook, Google, Apple, and Amazon are preparing for their "Big Tobacco moment." Mark Zuckerberg, Sundar Pichai, Tim Cook, and Jeff Bezos will appear together today before members of Congress who have been investigating their possible monopoly power. "It is set to be a bizarre spectacle," the N.Y. Times wrote, "with four men who run companies worth a total of around $4.85 trillion — and who include two of the world’s richest individuals — primed to argue that their businesses are not really that powerful after all." N.Y. Times 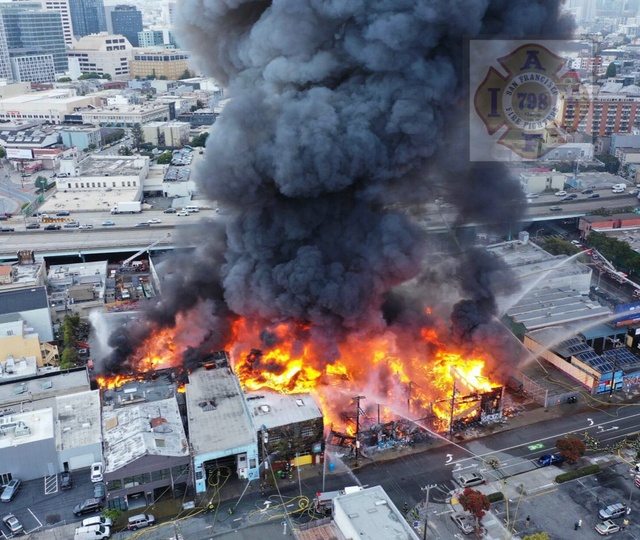 A massive fire raged through a two-block area of San Francisco early Tuesday, sending a giant black plume of smoke over the city. Roughly 160 firefighters battled the inferno as it destroyed an auto body shop, a construction supply store, and at least three other buildings. Roughly 100 workers fled the flames, all escaping without injury. S.F. Chronicle | CBS SF 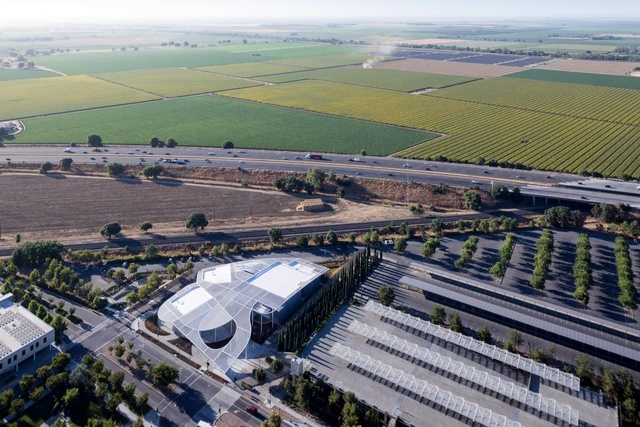 ☝️ That's a fine-arts museum in the heart of Northern California tomato country.

The Manetti Shrem Museum of Art was opened in 2016 alongside I-80 on the outskirts of the college town of Davis. The young architects behind the structure tried to use the unusual location to its advantage, blending indoors and outdoors and adding a swooping canopy inspired by the surrounding agricultural landscape. Critics have said the result signals an exciting direction for American architecture. The Manetti Shrem is temporarily closed because of the coronavirus, but normally free and open to all. Architect's Newspaper | L.A. Times 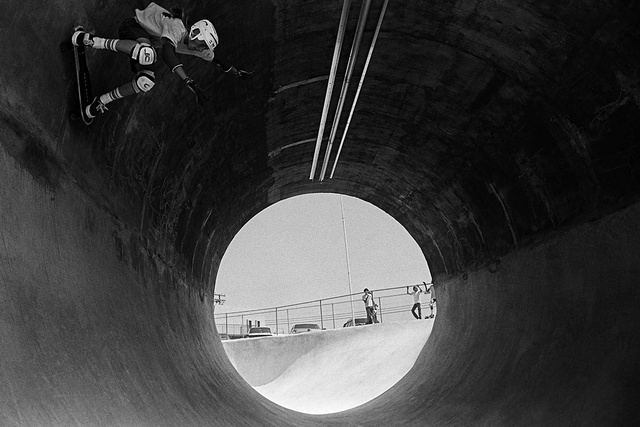 Skating a storm drain in Claremont in 1975.

The Baldy pipe in the San Gabriel foothills; the Nude Bowl in the Coachella Valley; Wallenberg High School in San Francisco.

Tony Hawk helped narrate this great video tour of the world's legendary skating spots, many of which are in California. 👉 Vox/YouTube 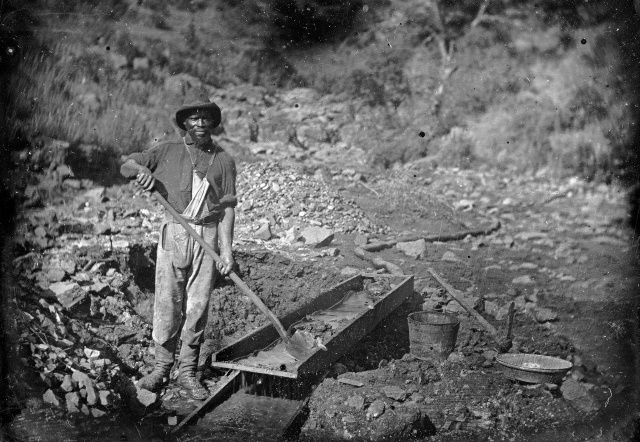 A Black miner in the northern Sierra foothills in 1852.

When California added antislavery language to its constitution in 1849, it was motivated by greed as much as moral decency.

Weeks before the convention, a Texan named Thomas Green had shown up along the Yuba River to join the Gold Rush. With him were 15 slaves, whose names Green used to establish grandiose mining claims. Appalled, locals whites called a meeting, and on this day in 1849 voted "that no slave or negro should own claims or even work in the mines."

Days later, the Yuba River prospectors had the opportunity to send a delegate to Monterey, where the state's first constitution was to be drafted. They chose William Shannon, a 27-year-old lawyer from Ireland who had witnessed slavery in Brazil and found it "loathsome" and "revolting." 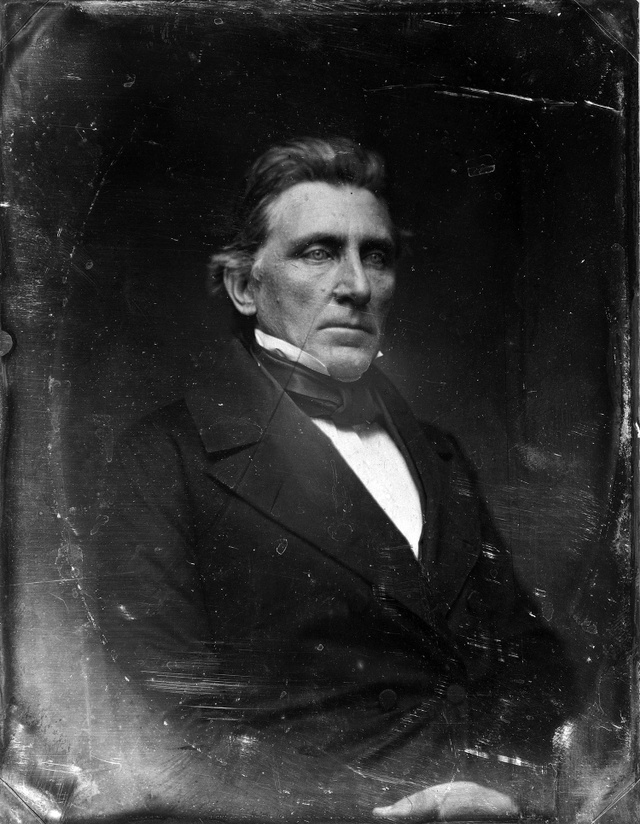 It was Shannon who introduced a section to the charter prohibiting slavery. Seconding the motion was William Gwin, the owner of 200 Mississippi slaves. His support surprised some. But as the historian Leonard Richards recounts in his book "The California Gold Rush and the Coming of the Civil War," Gwin understood the sentiments of the state's forty-niners.

"In our mines are to be found men of the highest intelligence and respectability performing daily labor," Gwin explained, "and they do not wish to see the slaves of some wealthy planter brought there and put in competition with their labor, side by side."

Shannon's motion was approved in a unanimous vote. Then for two full days the delegates hotly debated a proposal to bar even free Blacks from California. Again, a primary objective was to insulate white miners from competition. That motion was ultimately defeated, however, and the constitution was signed on Oct. 13. 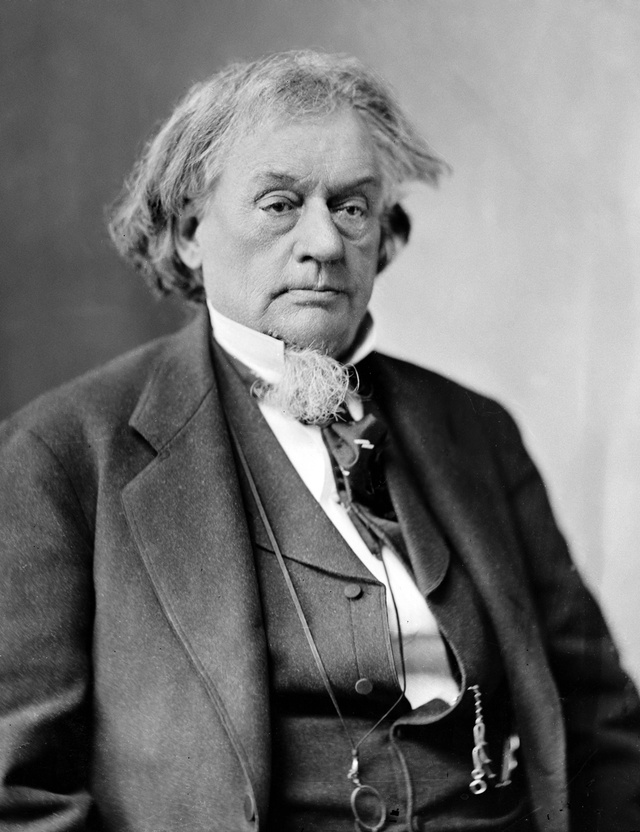 The Georgia lawmaker Robert Toombs was enraged by California's stance against slavery.

California's antislavery stance jolted Washington, where the balance of power tilted further away from the Southern slave states. On Dec. 13, as members of the U.S. House debated the California question, Rep. Robert Toombs, of Georgia, took the floor. "In the presence of the living God," he declared, if slaveholding is disallowed in California, "I am for disunion."

Even so, California was formally accepted into the union as a free state in September of 1850. Tensions only worsened as disillusioned southerners agitated for the right to bring slavery into new western territories. A decade later, in a culmination of events that the historian Richards links in part back to those Yuba River miners, the Civil War began.