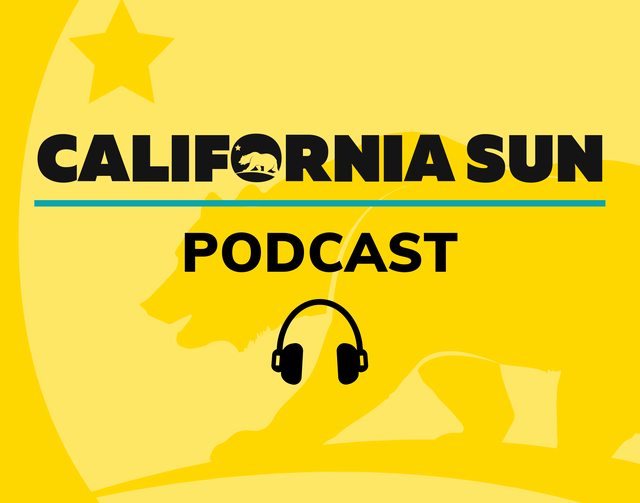 The California Sun is launching a podcast.

For some time I've been interested in creating an audio companion that highlights conversations with California's most fascinating personalities. I found the perfect host in Jeff Schechtman, a veteran broadcaster based in Napa.

Jeff will be interviewing leading thinkers on California, using the newsletter as inspiration to choose guests. He'll release one episode per week.

To kick things off, Jeff draws on conversations he had with the California historian Kevin Starr before his death in 2017. Starr's comments on the dreamers who created California are especially timely as a new governor tries to reimagine the state's role in the country and the world. 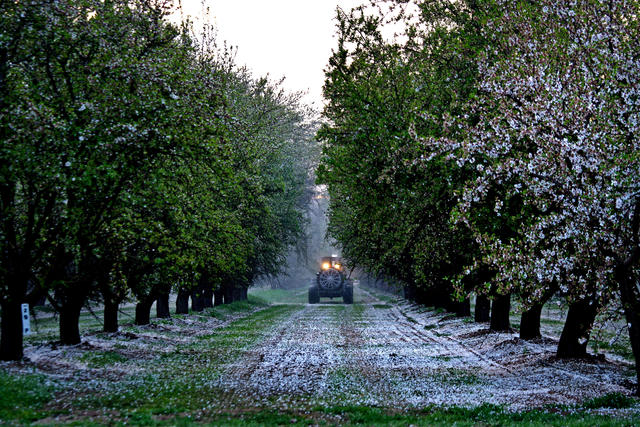 Almond trees in Delano. California's farms produce more fruits, nuts, and wine than the rest of the country combined.

Republican leaders are framing 2020 as a last stand against the Californication of America. But while the state has problems, writes Politico's Michael Grunwald, it's basically thriving: "If it's a socialist hellhole, it's a socialist hellhole that somehow nurtured Apple, Google, Facebook, Tesla, Uber, Netflix, Oracle and Intel, not to mention old-economy stalwarts like Chevron, Disney, Wells Fargo and the Hollywood film industry." Politico

Even so, Californians are increasingly on edge. A survey found that 53 percent of residents have considered fleeing the state, with high housing costs cited as the chief reason. CNBC

The National Enquirer has been one of President Trump's biggest boosters, pushing stories that celebrate him and savage his rivals. Turns out that California state employees have been unwitting backers of those efforts. The L.A. Times discovered that California's public pension fund, CalPERS, appeared to have owned as much as a third of the Enquirer's parent company in 2016. "I'm sure lots of CalPERS [plan holders] will be happy to know they were paying hush money to help get Trump elected," an economist said. 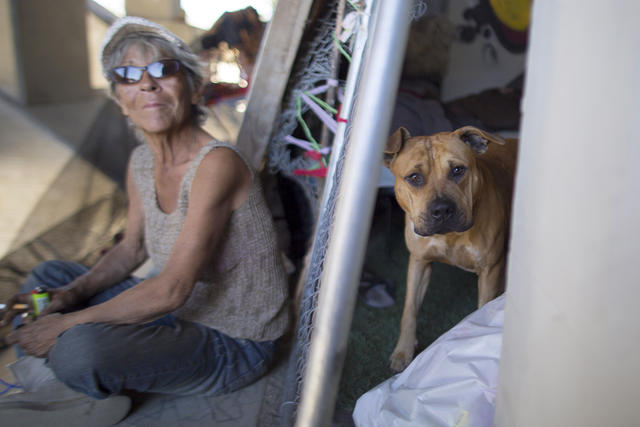 Maria Romero sat with her dog Baby under a bridge in Los Angeles.

A lot of homeless Californians have pets. But the animals are unwelcome at many homeless shelters, either banned outright or subject to conditions, driving away pet owners who would otherwise come in off the street. That's why a state lawmaker is pushing legislation that would add resources for pet care at shelters. It makes "raging common sense," he said.

Millions of bees are now scattered across Central Valley almond orchards in the world's largest controlled pollination — and thieves are on the prowl. Heists of beehives, which can fetch up to $500 apiece, are a major problem in California. Last week, nearly 200 were reported stolen from orchards in Tulare County. A beekeepers association offered a $10,000 reward in the case. 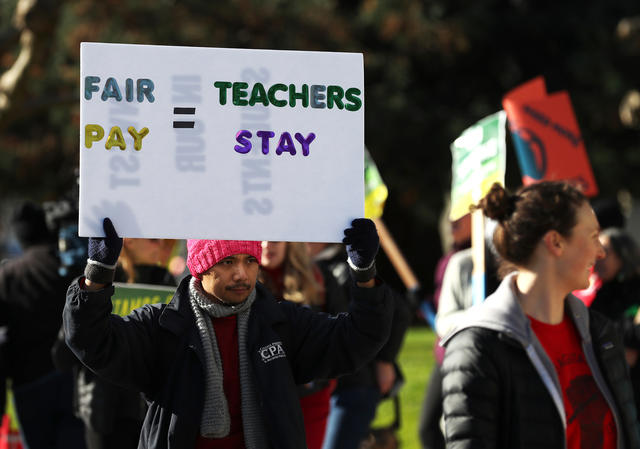 Oakland public teachers carried signs during a strike on Thursday.

Following in the footsteps of colleagues in Los Angeles, roughly 3,000 teachers went on strike in Oakland demanding a 12 percent retroactive raise to compensate for what they say are the among the lowest teacher salaries in the Bay Area. "There's no way I'd be able to live here without a roommate," one teacher said. "This is not what I went to Brown University to get a master's for."

Despite promises of greater oversight, Facebook has continued to identify users who are interested in Nazis — and then let advertisers target them directly. The social network's record $55 billion in ad revenue in 2018 has been credited in part to its reliance on automation, with algorithms sorting users into marketable groups. But a lack of human oversight has led to a parade of scandals. 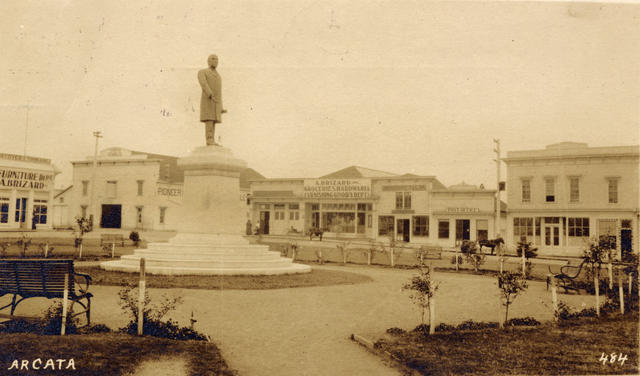 A statue of William McKinley has stood in the central plaza of the small North Coast city of Arcata since 1906. Now, under pressure from residents who argue that the former president mistreated Native Americans, the 8-foot bronze likeness is headed to Canton, Ohio, where McKinley lived. "We are very excited to have been awarded the statue," Canton's mayor said. 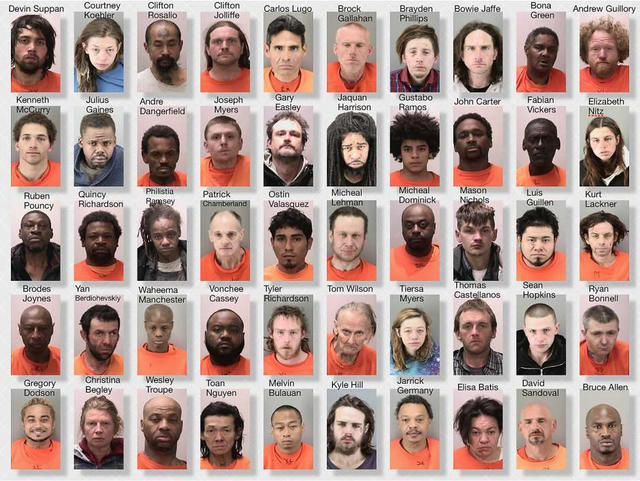 Police made arrests in the Tenderloin for crimes including drug dealing, burglary, and assault.

California authorities carried out a dragnet focused on fugitives in San Francisco's Tenderloin — and ended up arresting 50 people. Residents have complained that the district operates as an open-air bazaar for drug dealers. "The community in the Tenderloin is very determined and organized to take their community back," a police official said. 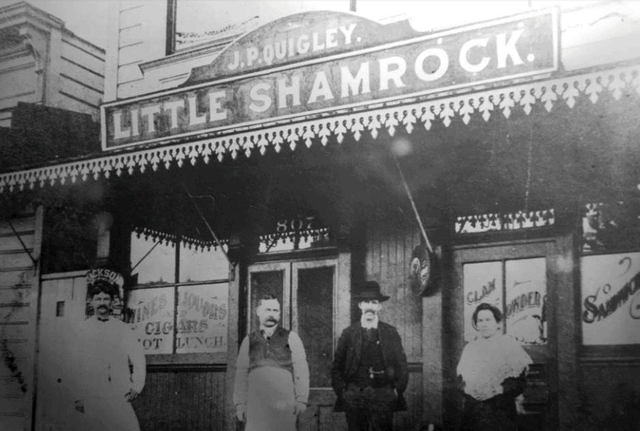 Little Shamrock is an elder statesman of the Sunset District, the Chronicle said.

The S.F. Chronicle published "the ultimate guide to classic S.F. bars" in a celebration of what makes the city special. "One of the things that struck me about many of these bars is just how beautiful they are," the newspaper's food editor said on Twitter. "The kind of beauty that doesn't appear overnight." 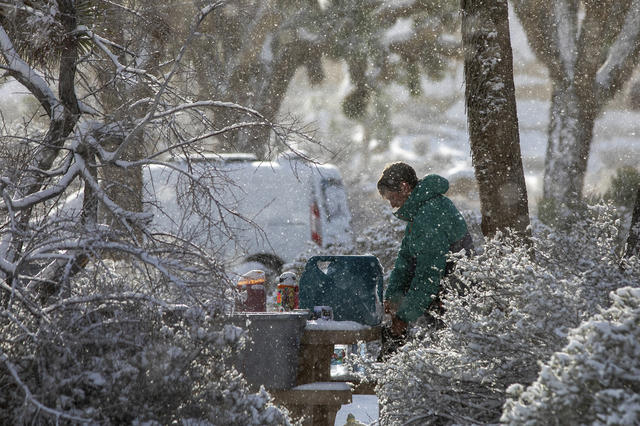 A camper woke up to snow in Joshua Tree National Park on Thursday.

Snow fell in Los Angeles on Thursday. It wasn't much, but it was enough for some residents to squeal with delight. For a short while, snow was reported in Malibu, Pasadena, West Hollywood, Northridge, San Bernardino, Thousand Oaks, and other places that hadn't seen the stuff in decades. Meteorologists cited unusually chilly temperatures. "This is probably the coldest storm system I've seen in my time in California," one said. 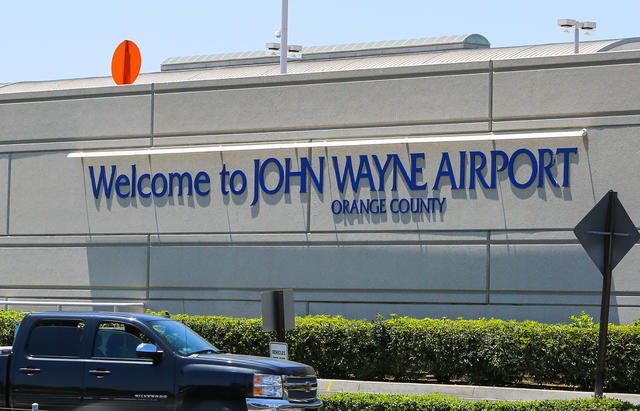 Santa Ana's John Wayne Airport was christened with the name in 1979.

An old interview that John Wayne gave to Playboy magazine in which he expressed racist and homophobic views made the rounds on social media this week. Some people were aghast. Others wondered why the actor's retrograde ideas were being dredged up 40 years after his death. Now an L.A. Times columnist is arguing that Wayne's name has no place on a civic facility. "We’re talking about Orange County’s John Wayne Airport," he wrote. "It's long past the time that Wayne's name should come down." 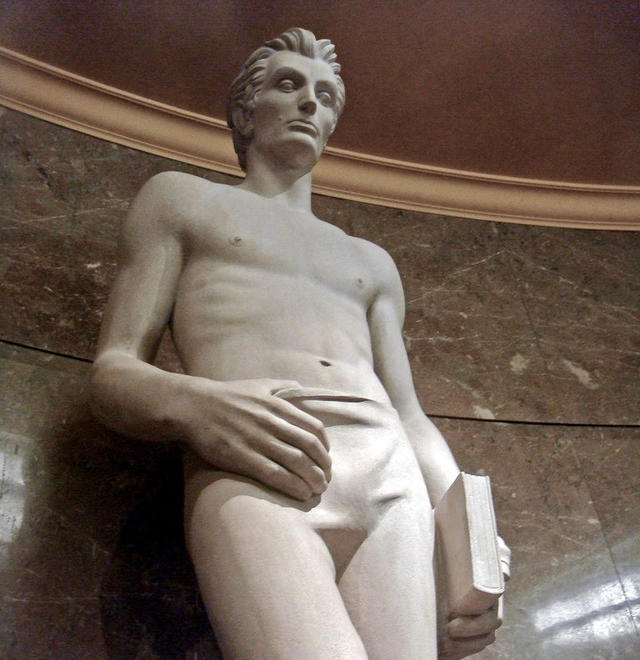 "Young Lincoln" has been striking a suggestive pose at a federal courthouse in Los Angeles for decades.

There's a statue of a Abraham Lincoln as a young stud inside a Los Angeles federal courthouse. This fun fact was brought to Twitter's attention on Wednesday by the screenwriter Zack Stentz, whose post about the "swimsuit model" interpretation of the Great Emancipator set off a wave of disbelief and jokes: "honest abs," "the Gettysburg undress," "more like Babe-raham Lincoln."

The limestone work was created back in 1941 by James Lee Hansen, a 22-year-old art student from Fresno who won a national contest for a sculpture at the new federal building. Some people at the time were scandalized by the shirtless Lincoln, whose lithe figure was based on the artist himself. "Well, from a sculpturing standpoint," Hansen explained to the L.A. Times, "it's better to show the body without any clothes. That's why I left 'em off." 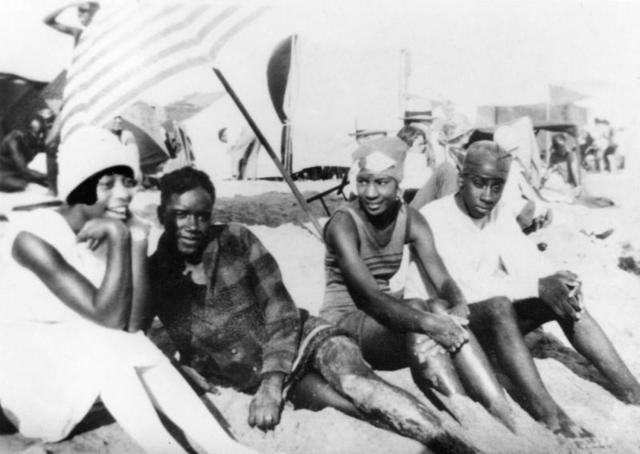 Here's a group of people at a Santa Monica beach popular with African-Americans in 1926. "The Inkwell," as it was derisively known, was among the few places along California's coast where blacks could enjoy themselves free of harassment.

It was also where Nick Gabaldón, born in Los Angeles on this week in 1927, became one of the first documented black surfers. Invited to surf with a white classmate in Malibu, Gabaldón would paddle 12 miles from the shore in Santa Monica. He did so, it was believed, to avoid racist taunts on the walk across the sand in Malibu.

At the age of just 24, Gabaldón surfed his last wave in Malibu, crashing into a pier piling and slipping beneath the water. Generations later, the Black Surfers Collective holds a tribute to the pioneer every year called Nick Gabaldón Day. Its mission: To challenge norms about who belongs in the waves. 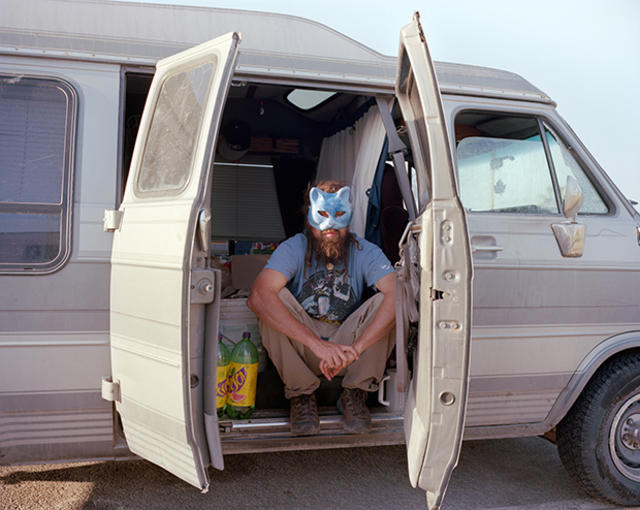 Nick, from Colorado, in the van he lives out of in San Diego.

Some readers were concerned by a solicitation for advertisers in Thursday's newsletter. I failed to mention something important: If you've supported the California Sun at any level — even $1 — you won't see any any ads.

They're displayed only to those who subscribe but have not contributed.