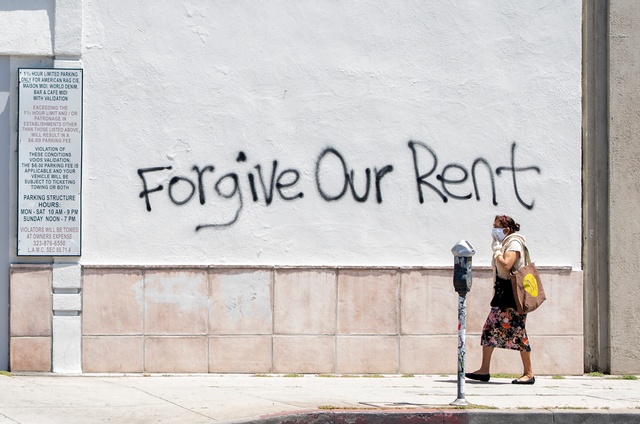 A woman walked by a wall covered in graffiti in Los Angeles on May 1, 2020.

California is planning rent forgiveness on a scale never seen before in the United States. Officials said the state would use $5.2 billion accrued from multiple federal aid packages to pay all of the unpaid rent accumulated by low-income tenants during the coronavirus pandemic, giving renters a clean slate while making landlords whole. Lawmakers were also working to extend an eviction moratorium due to expire on June 30. N.Y. Times | A.P.

The U.S. Court of Appeals for the 9th Circuit on Monday blocked a federal judge's decision that overturned California's 32-year-old assault weapons ban. It was the latest turn in a case that appears bound for the U.S. Supreme Court. Gun-rights advocates hope the court's new six-justice conservative majority will clarify the scope of the Second Amendment with an expansive view of the right to bear arms. L.A. Times | Mercury News 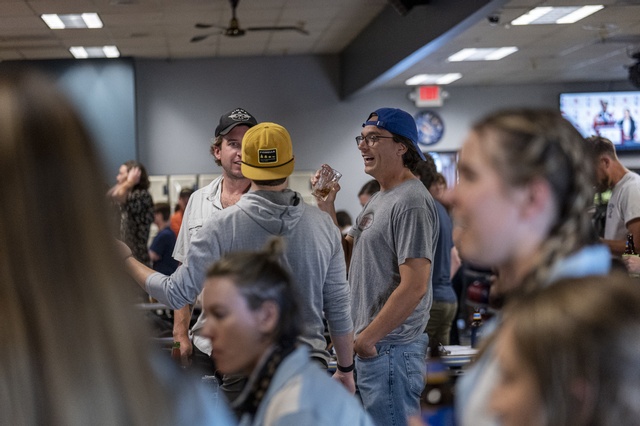 People celebrated the lifting of Covid-19 restrictions at Presidio Bowl in San Francisco on June 15.

After steadily declining since December, California's rate of test positivity for the coronavirus started increasing over the past two weeks. It's still low at 1%, but health officials have reported surging cases of the highly infectious Delta variant in recent weeks. Experts have warned of the possible emergence of "two Americas" of Covid-19: one with high inoculation rates that remains unscathed and another with low vaccine levels that faces renewed deadly surges. In California, seven rural counties have full vaccination rates below 30%. S.F. Chronicle | Deadline

A wildfire burning out of control through the coastal mountains south of Big Sur is threatening Native American cultural sites, a Buddhist monastery, and endangered species such as California condors, officials said. The Willow Fire started last Thursday and has spread more than 4 square miles across rugged terrain that has made it difficult for firefighters to navigate. Remaining at the Tassajara Mountain Zen Center are seven so-called "fire monks," trained to protect the monastery as a precaution of living in fire country. KQED | A.P.

Three men were fatally shot and five others were wounded at a house party in Richmond late Sunday, the second major spasm of violence to jolt the East Bay over the weekend. The motive was unclear. Police said they were looking for at least two suspects. The violence erupted one day after a shooting during a Juneteenth celebration at Oakland's Lake Merritt that left one man dead and seven others wounded. The authorities said it appeared to involve gang hostilities. S.F. Chronicle | Mercury News 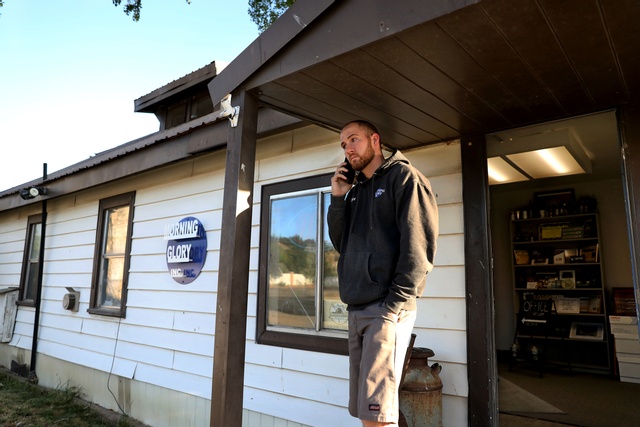 Josh McKernan, 32, the owner of a dairy in Susanville, said the prison is his largest account.

Susanville, a town of 8,000 people in California's rural northeast corner, was once a lumber town. When the mills started closing in the 1950s, its economy was rescued by the opening of a state prison. Then in April, officials said the prison would be closed, a casualty of the state's shrinking inmate population. Dozens of "for sale" signs appeared on lawns. “Nobody was asked our opinions about it or what the impact could be,” said Misty Arteaga. “It’s just like — our town is starting to die.” L.A. Times

Pacaso, a $1 billion startup founded by former Zillow executives, has been buying up expensive homes in Napa Valley, then selling ownership shares to second-home buyers. Infuriated locals say the properties are timeshares in diguise. “It destroys the fabric of the community,” said Brad Day, who is part of a local movement to banish Pacaso. “It becomes like hotel row for tourists. We have to look out for the people who live here and are trying to raise a family here.” S.F. Chronicle | Wall Street Journal

People threw tortillas at a basketball team from a mostly Latino high school during a championship game in Coronado on Saturday. Captured on video, the incident unfolded after Orange Glen High lost a close game against a team from mostly white Coronado High School. As the coaching staff argued, at least two Coronado players along with others threw handfuls of tortillas at the Orange Glen players. The Coronado superintendent, Karl Mueller, called the acts "reprehensible." Police were investigating. CBS 8 San Diego | S.D. Union-Tribune 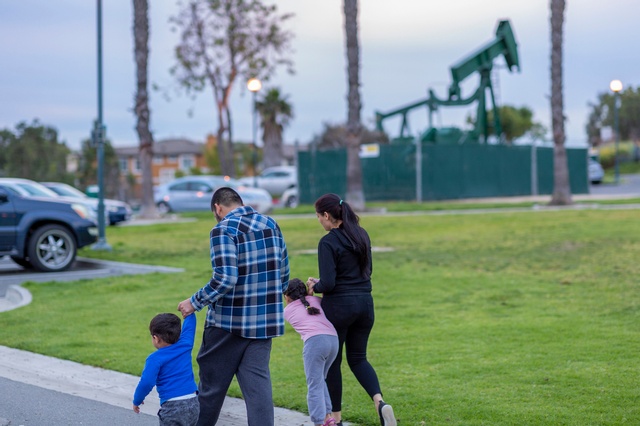 There are more than 20,000 active, idle, or abandoned oil wells spread across greater Los Angeles. In the city, about 75% of active wells are located less than half a mile from homes, schools, parks, and other sensitive areas. Between 2017 and 2019, researchers gave lung tests to more than 700 residents near drilling sites. Controlling for other risk factors, they found that the closer someone lives to a well, the poorer that person's ability to breathe. The Conversation

The Michael Jordan of disc golf is a 30-year-old from Huntington Beach named Paul McBeth. When he first started playing in professional tournaments a decade ago, he crisscrossed the country in his father's 1978 Dodge Ramcharger, winning $4,000 for a first-place prize in 2011. Now McBeth collects six-figure purses and has signed a $10 million endorsement deal with the disc golf manufacturer Discraft, setting a new standard for the sport. The Ringer wrote about "one of the world’s most improbable multimillionaire athletes." 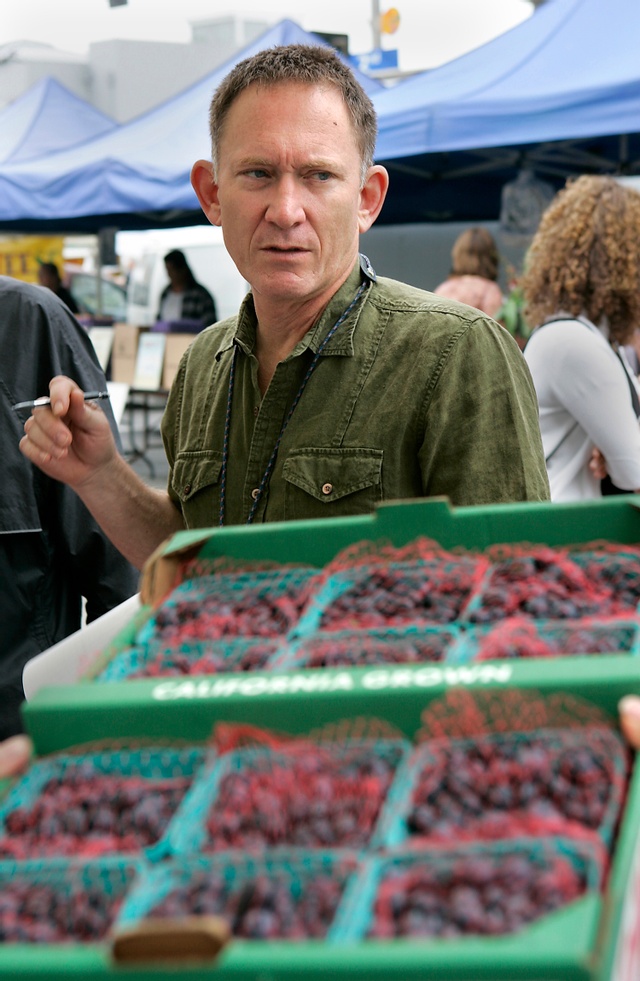 Mark Peel at the Santa Monica Farmers Market in 2006.

Mark Peel died on Sunday. The acclaimed Los Angeles chef helped create California cuisine, a style based on fresh regional ingredients and a casually beautiful presentation. “It should look disheveled,” he said. “A little messy. As if it fell from heaven.” The late L.A. Times critic Jonathan Gold called Peel the most exacting grill chef in the country, “a master who plays his smoldering logs the way that Pinchas Zukerman does a Stradivarius.” Peel died just nine days after being diagnosed with an aggressive form of cancer. He was 66. L.A. Times | N.Y. Times 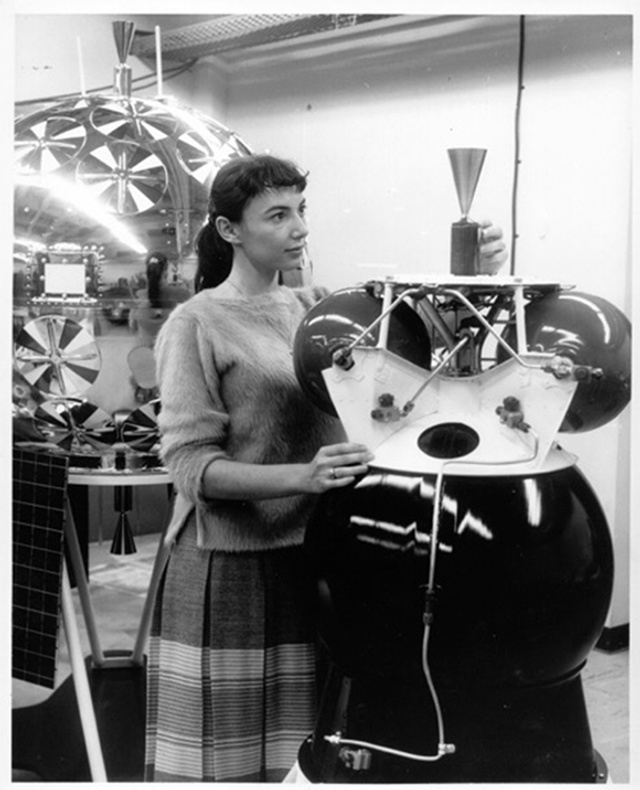 Pictured above is Judith Love Cohen, a pioneering aerospace engineer, posing with a satellite at Space Technology Laboratories in Redondo Beach in 1959.

Gifted in math from a young age, Cohen recalled a high school counselor once telling her, “You know, Judy, I think you ought to go to a nice finishing school and learn to be a lady.” Instead, she earned engineering degrees at USC in the late 1950s and early 1960s without ever meeting another female engineering student. Her career included roles working on the Apollo space program and the Hubble Space Telescope. In retirement, she published popular children's books that encouraged young girls to pursue science.

In a remembrance of Cohen, who died in July of 2016, one her sons recounted how, when going into labor with her fourth child, she grabbed a computer printout of a problem she was working on and brought it to the hospital. "Later that day," Neil Siegel wrote, "she called her boss and told him that she had solved the problem. And ... oh, yes, the baby was born, too."

The newborn's name: Jack Black, who inherited his mother's tenacity even if he channeled it in a very different direction.