Ecologists struggled to put into words the significance of the loss of more than a tenth of California's mature giant sequoias in a single wildfire last year. The trees, some thousands of years old, won't return in a generation, or many generations. “If we’re looking at forest fires that can now kill these old trees that have survived dozens, if not 100 or more previous wildfires, that’s a very bad sign," one ecologist said. L.A. Times | Fresno Bee 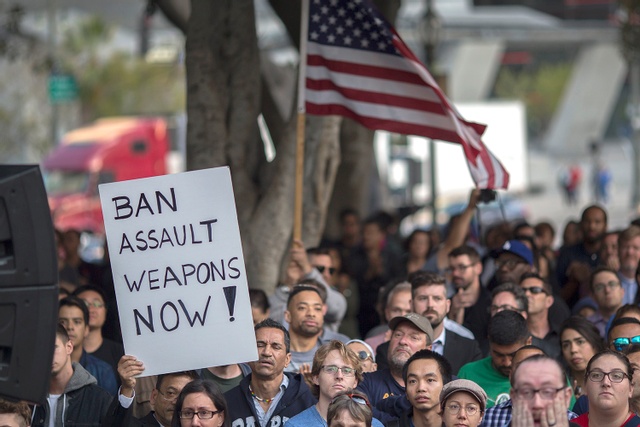 People gathered for a vigil in Los Angeles on June 13, 2016, after the Orlando nightclub shooting.

California leaders vowed to fight back after a federal judge struck down the state's 30-year-old ban on assault weapons. Judge Roger T. Benitez called the prohibition a “failed experiment.” California could find itself disappointed if the case ends up in front of the U.S. Supreme Court, said Erwin Chemerinsky, the dean of the law school at UC Berkeley. “This is an extreme gun rights reading of the Second Amendment. But it might be where our Supreme Court wants to go.” N.Y. Times | L.A. Times

As Americans emerge from their post-pandemic cocoons, the ultrarunner Timothy Olson is celebrating in his own way: He's attempting to break the speed record on the Pacific Crest Trail, stretching from the Mexican border to the Canadian border through California, Oregon, and Washington. To pull it off, he needs to cover 2,650 miles in under 52 days — or the equivalent of back-to-back marathons daily for 50 days straight. “I want to set a marker for what is possible,” he said. Outside | S.F. Chronicle

Olson set off from the trail's Southern Terminus last week. Track his progress. 👉 Outside

A visualization of the setting sun in California.

Crescent City, in the northwest corner of California, has the state's latest sunset, peaking at about 8:55 pm later this month. That's nearly an hour later than in southern border towns like Calexico, a seeming injustice that gets roughly balanced out by extra morning sun. It's among the odd facts that jump out playing with this interactive visualization of shade across California, the continental U.S. state with the most divergent sunset times thanks to its tremendous north-south length. (To adjust the date, click the date at the bottom and slide the slider). 👉 Shademap.app

“the gov spent 100s of thousands of dollars on training me, im gonna use that s—.”

In court filings, federal prosecutors detailed how an extremist militia based in Turlock known as the Grizzly Scouts plotted to impersonate Antifa and stir up violent conflict at protests last year. Four alleged Scouts were charged with destroying evidence in the case of Steven Carrillo, who has been accused of killing two law enforcement officers in Oakland and Ben Lomond last year. Bay Area News Group 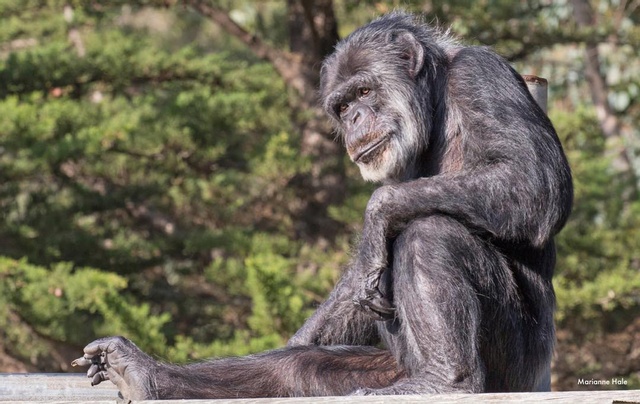 “Cobby was part of San Francisco,” a zoo official told the S.F. Chronicle.

Cobby, a beloved chimpanzee who lived at the San Francisco Zoo for more than half a century, has died at the age of 63, zoo officials said Sunday. Sporting a distinguished gray beard, Cobby was the oldest chimp at any accredited North American zoo. He was a hand-reared performing chimpanzee before being brought to the zoo in the mid-1960s. He was said to form bonds with humans nearly as deep as those with his troop members. S.F. Chronicle | A.P.

Ivor Bradley wanted to open a coffee shop in a vacant storefront in San Francisco's Mission District. He began paying $4,500 a month in rent last September, but he has yet to open because an individual filed an appeal under CEQA, the environmental law that has become a favorite weapon of NIMBY groups. In April, Bradley began researching Denver, the columnist Heather Knight wrote: "He found cheaper rents, happy families and a city that doesn’t consider a new coffee shop a matter of grave, dramatic importance." S.F. Chronicle

A man and a woman were arrested Sunday in connection with a May 21 road rage shooting that left a 6-year-old boy dead in Southern California, officials said. Marcus Anthony Eriz, 24, and Lee Wynne, 23, were arrested outside their home in Costa Mesa and were expected to be charged with murder. According to the boy's mother, she was cut off and made a hand gesture at the other car on the 55 Freeway. A bullet hit the boy, Aiden Leos, in his abdomen as he sat in the back seat. Reward money in the search for the shooter reached $500,000. O.C. Register | A.P. 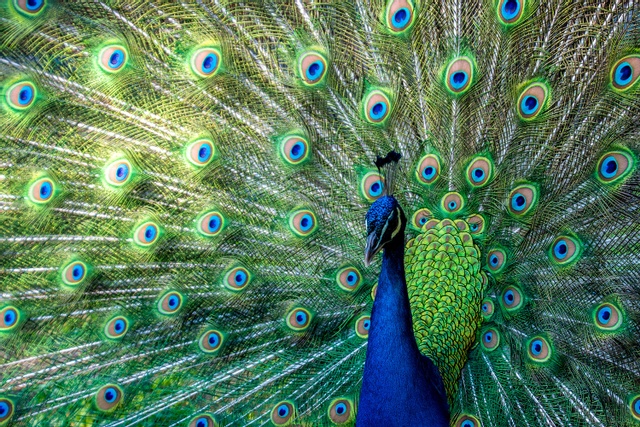 Pasadena has hundreds of roaming peacocks, and depending on whom you ask they are a blessing or a curse. The birds are beautiful, most can agree. But they also scream like banshees and peck violently at parked cars, mistaking their own reflections for romantic rivals. “They wake me up at dawn," said Kathleen Tuttle, 68. "They sound like babies being tortured through a microphone, a very large microphone. And that is probably the start of my complaints." Washington Post

A Californian is now eighth in line of succession to the British throne. Meghan Markle gave birth to Lilibet Diana Mountbatten-Windsor, 7 lbs, 11 oz, at Santa Barbara Cottage Hospital Friday morning. Mother and child were said to be doing well. The royal couple, who also have a 2-year-old son named Archie, bought a $16 million Montecito mansion last summer as they grew increasingly estranged from the royal family. L.A. Times | A.P. 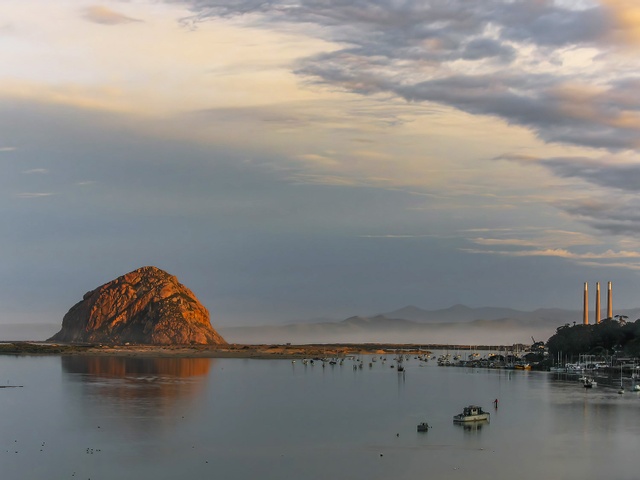 Some Morro Bay locals have a sentimental attachment to the smokestacks.

A deal has been reached with an energy company that would tear down Morro Bay's iconic smokestacks. The three stacks have been a part of the Central Coast fishing village's skyline since the 1950s, staring at Morro Rock just across the bay. The town nickname, Three Stacks and a Rock, is uttered with some affection. Locals reacted with mixed emotions about the plan on Facebook. The Tribune 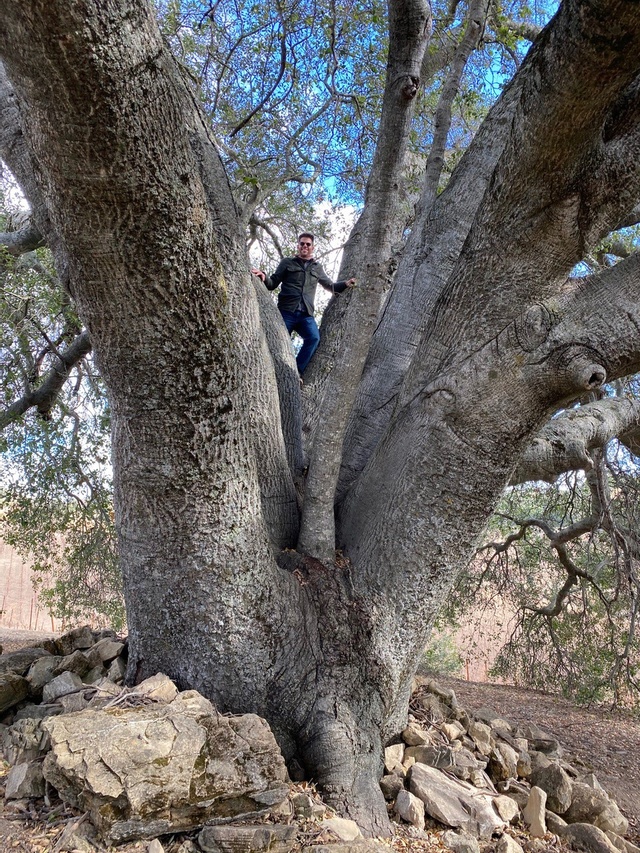 … Dr. Matt Ritter, a botany professor in the Biological Sciences Department at Cal Poly and the author of the 2018 guide to California’s flora, “California Plants: A Guide to Our Iconic Flora.”

A: Sequoia National Park. Last weekend I went there with my students on one of our many field botany course trips. It was spectacular. We got caught in a storm that started as rain in the foothills and progressed to snow at the higher elevations. The dogwoods were in full bloom, and seeing them in stark contrast to the red bark of the giant sequoias, with a bit of snow on the ground, is an experience all Californians should have. The mountains in any weather are worth the trip.

Few podcasts are as good as Sam Harris’s “Making Sense.” He’s a skilled interviewer and his guests never fail to be interesting. It is intellectually rigorous, rational, and tackles the biggest ideas of our time.

In San Luis Obispo, the Jewel of India has excellent food and is run by a friendly family. I go for the Bollywood music videos that are always on the TV.

There are so many interesting California figures it’s hard to choose. I’ll pick three with the same first name. John Fremont, John Muir, and John Steinbeck. They all knew a different California, and were responsible for changing the history of the state. I’d get the conversation started by asking them if they think we should judge historical figures by the morals of today.

The drought is obviously going to be a major factor in California this year. What are some things people can do to help their community environments/ecosystems that they might not immediately think of?

Continue to water your trees — trees in your yard and the young ones on city streets. Find a way to help get water to trees that need them. Trees are a long-term investment for communities. They cool urban areas, help with noise and air pollution, sequester carbon, provide wildlife habitat, and make us feel better. Every time we have a drought in California, it becomes trendy to turn the water off the lawns, but people inadvertently end up killing their trees.

An earlier version of this newsletter mistated a meteorological fact about California. The state has the most divergent sunsets in the continental United States, not the entire nation. Alaska has more divergent sunsets.