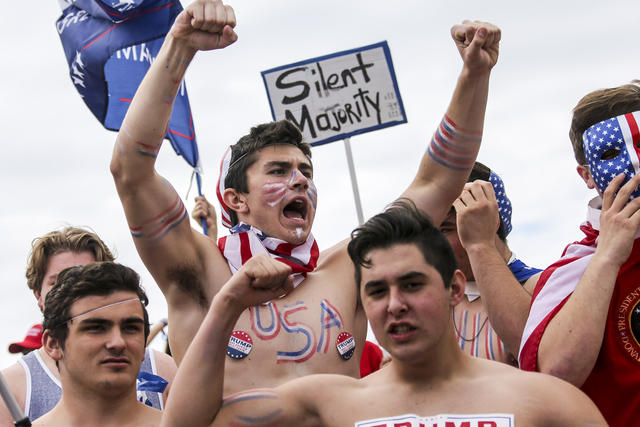 Trump supporters held a rally in Huntington Beach on March 25, 2017.

Earlier this year, Gov. Gavin Newsom singled out Huntington Beach in a lawsuit, accusing the city of blocking affordable housing. But a lot of California cities have failed to fulfill the state housing mandate. Huntington Beach's mayor thinks it's no coincidence that his city has defied the state sanctuary law, a move upheld in court. "I believe they're still upset that we beat them," he said. "Of course, we're all racists because of that — that's what they tell us." Christian Science Monitor

California's water taps are in crisis. A previously undisclosed estimate by state regulators says as many 1,000 community water systems across the state are now at significant risk of failing to deliver potable water. That's 1 out of every 3. N.Y. Times

Newsom signed a law that will take up to $130 million each year that was supposed to clean up the air and use it instead to clean up drinking water. A.P. 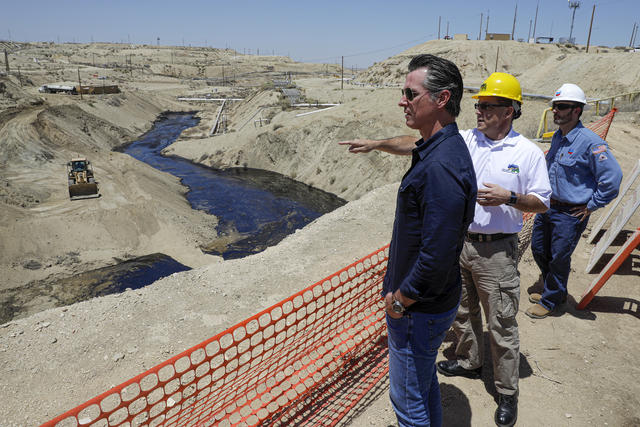 An oil field west of Bakersfield has now leaked nearly 1 million gallons of black fluid, about a third of it oil. Visiting the site Wednesday, Gov. Gavin Newsom said he was encouraged by Chevron's efforts to clean up California's largest oil spill in years. "I'm seeing progress," he said. KQED | Bakersfield Californian

For years, San Francisco has leased hundreds of acres it owns in Kern County to Chevron, which operates 82 oil wells there. Now, citing environmental concerns, the city is barring extraction from the land. S.F. Examiner

After years of massively destructive blazes, insurance companies have been canceling policies and raising rates across rural parts of California. State data shows that complaints of cancellations have doubled in the past two years. "I refer to it as a quiet crisis," one agent said. It's little wonder: In 2017 and 2018 alone, California wildfires cost insurers $26 billion. L.A. Times | Pacific Standard 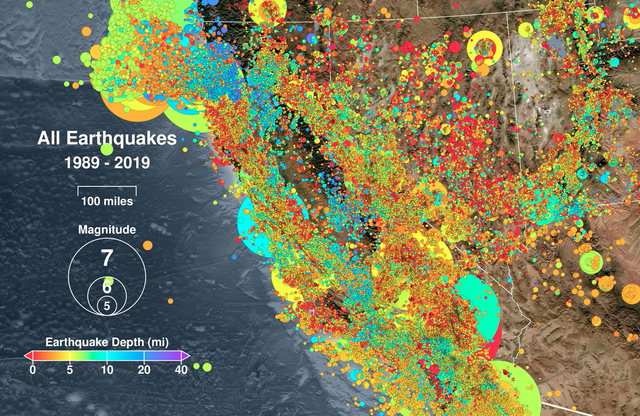 The Pacific Tsunami Warning Center created a fascinating animation showing the last 30 years of seismic activity in California leading up to the magnitude 7.1 earthquake of July 5. Scientists have documented 1.8 million earthquakes in Southern California alone over the last decade. YouTube/PacificTWC

The Ridgecrest earthquakes caused about $200 million in property damage, according to a new estimate. Less than $40 million of the damage is expected to be covered by insurance. Business Insurance

Gun violence has dropped sharply in the Bay Area over the past decade. With one exception: On the region's freeways the number of shootings has actually gone up. The authorities are uncertain why, but they suspect the scattering of gangs from gentrifying cities is playing a role. Gun violence has become "more transitory and regional," one prosecutor said. The Guardian 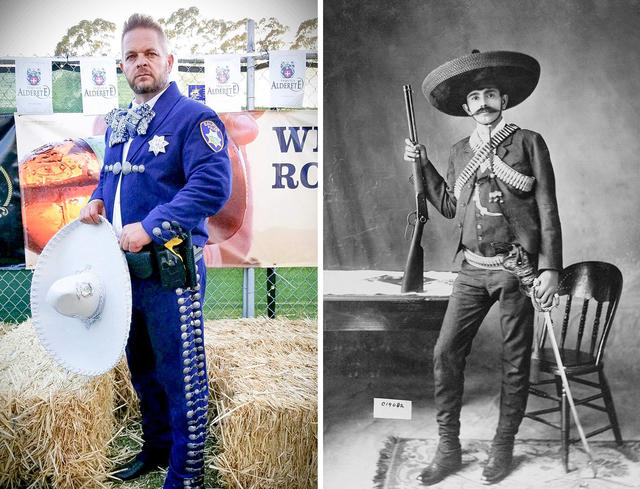 A Salinas officer on duty at the California Rodeo Salinas, and Mexican revolutionary Eufemio Zapata.

The Salinas Police Department is using a powerful gesture to connect with its heavily Hispanic community: Wearing traditional charro suits at events. To many Mexican Americans, the charro, or horseman, is a symbol of the motherland and Mexican identity. Judging from the outpouring of praise on the police department's Facebook page, the initiative has been a major win for community relations. The Californian

Canesa's Brooklyn Heros, a deli in the Bay Area town of Clayton, was inundated with criticism after it offered a free side dish to any customers who said "send her back." But some locals like the promotion. On Tuesday morning, a steady stream of customers showed up despite 97-degree heat. By noon, the line stretched 30 patrons long. S.F. Chronicle | Washington Post 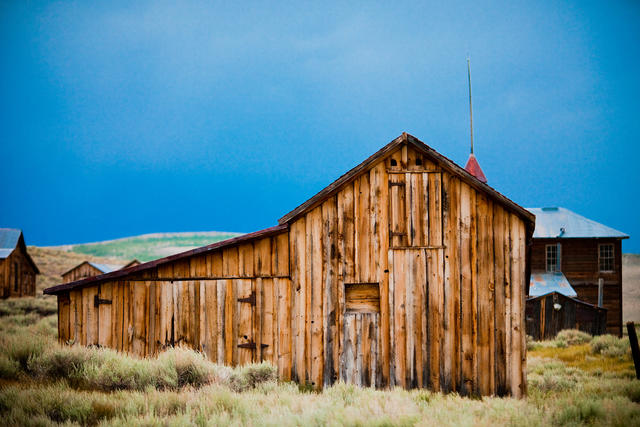 Bodie, California's most atmospheric ghost town, remains much like it was when the last residents left in the 1950s. Here's a spectacular drone video that will make you want to visit more than ever. Vimeo

"Fair warning for anyone that thinks this is just folklore — my life has never seen such turmoil." Here's the bizarre story of how a Bodie park ranger invented a story about a curse to thwart thieves. KQED 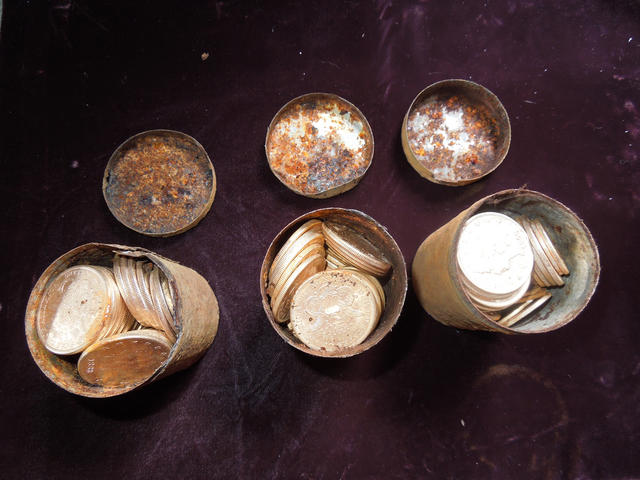 Some of the tin cans recovered from the so-called Saddle Ridge Hoard.

Today I learned: In 2013, a couple was out walking the dog on their rural Northern California property when they spotted a tin can peeking out from the dirt. Inside it, and seven other cans, they found more than $10 million worth of pristine 19th-century gold coins.

It was the largest discovery of buried gold coins ever recorded in the United States.

Some have speculated that a bank-distrusting miner stashed the coins, which would have had a face value of about $28,000. But the truth remains uncertain. So does the identity of the lucky couple, who prudently chose to stay anonymous. But they did give an interview to a rare coin dealer. They said they planned to keep working and would help their loved ones and community. "We love our lives as they are," the wife said. TIME | Vintage News

A Navy SEAL platoon in Iraq is being sent home to San Diego for drinking while deployed, the military said. U.S. Special Operations Command said the commander "lost confidence in the team's ability to accomplish the mission." The platoon is part of SEAL Team 7, some of whose members accused Chief Eddie Gallagher of war crimes. He was found not guilty. S.D. Union-Tribune | Washington Post 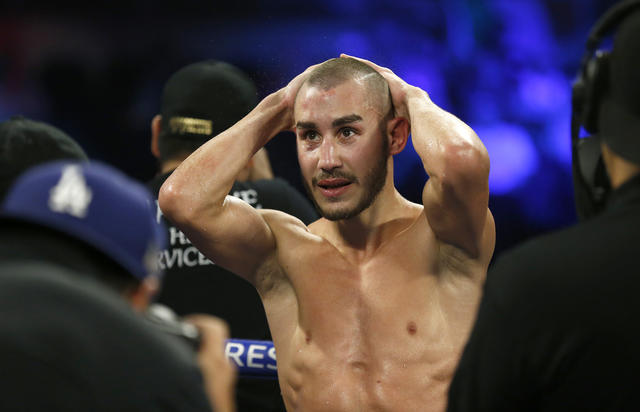 Maxim Dadashev, seen after a fight last fall, hoped his boxing career would earn him a green card.

Boxer Maxim Dadashev was born in Russia but he was based in Oxnard, where he harbored dreams to gain his U.S. citizenship and a world title. The 28-year-old died Tuesday after suffering a brain injury in a light-welterweight fight in Maryland last Friday. After the 11th round, Dadashev could be seen shaking his head as his trainer pleaded with him to stop the fight. "You're getting hit too much, Max," he told him. "Please, Max, please let me do this." Ventura County Star | ESPN

San Diego's supply of tech jobs is growing faster than that of nearly every city in America. A new report found that of 50 top technology markets in North America, only Orlando outpaced San Diego, which experienced a 10.3 percent surge in tech employment in the past two years. S.D. Union-Tribune 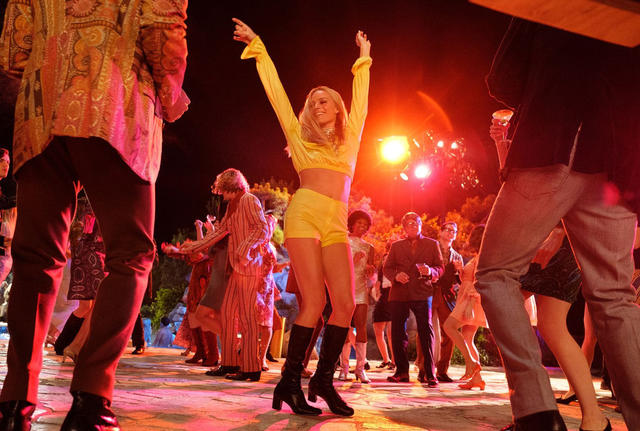 Margot Robbie in “Once Upon a Time in Hollywood.”

Quentin Tarantino’s ninth film, "Once Upon a Time in ... Hollywood," is, as one critic put it, the filmmaker's "valentine to the Los Angeles of his youth." A sampling of reviews: 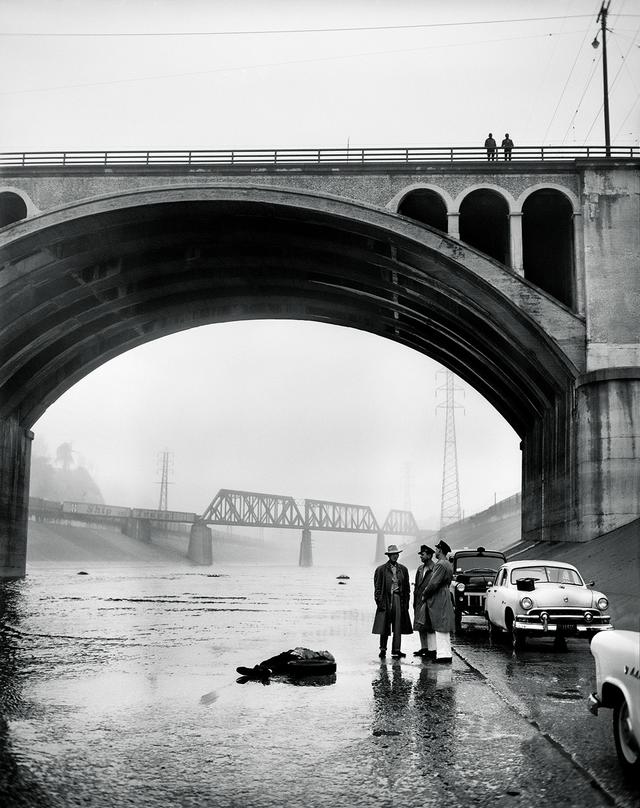 Between the 1920s and 1950s, the glamorous veneer of Hollywood obscured Los Angeles's dark underbelly of murder, corruption, and gangsterism. All of that sin was filtered into novels and then celluloid to become known as L.A. Noir. A cultural anthropologist combed through photo archives to create a volume that captures a grim reality of Hollywood's golden age. huck magazine | LA Weekly

Also, here is a series of LAPD crime scene photos from the 1920s to 1970s, drawn from an exhibit now on display at the city's Lucie Foundation. The Guardian