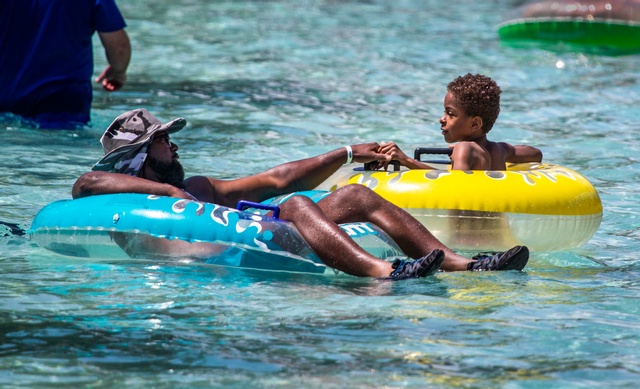 Not only does California have the country's lowest coronavirus rate, it's home to four of the 10 metropolitan areas with the lowest rates. As of Sunday, Salinas had the lowest rate of roughly 400 metro areas: 0.7 cases per 100,000 people. Santa Cruz was at No. 2, trailed by San Jose at No. 8 and Los Angeles at No. 10. An infectious disease expert said California had created a "force field" of inoculation and natural immunity. S.F. Chronicle

In 2017, state lawmakers approved a measure to fund repairs on California’s crumbling roads and bridges with a controversial gas tax hike. Four years later, California has the highest gas taxes in the nation, but officials say it isn't enough to cover even half of the work needed. Part of the problem: Cars are more efficient and greater numbers of people are working from home. There's now talk of a new fee based on vehicle miles traveled. L.A. Times 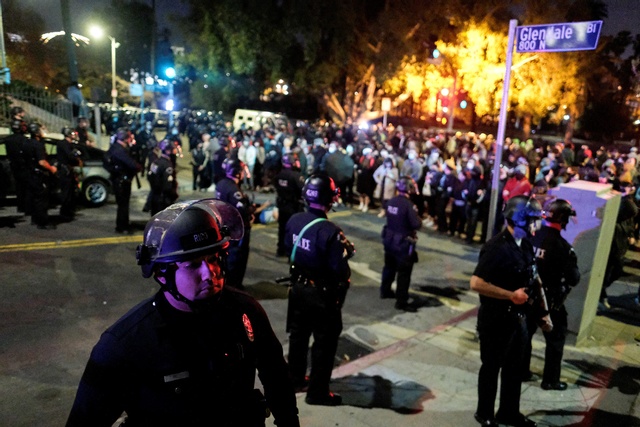 Police gathered at Echo Park in Los Angeles ahead of a planned clean-up on March 24.

California has embraced a strategy of “tolerant containment” of the state's homelessness and drug addiction crises. But without interventions to remedy the problems, writes the sociologist Neil Gong, they are only worsening. "Conservatives blame California’s homelessness problem and related woes on permissive liberal governance, but the truth is that neither left nor right would intentionally design a system this dysfunctional. It’s a Frankenstein’s monster created by mating civil libertarianism with austerity." Washington Post 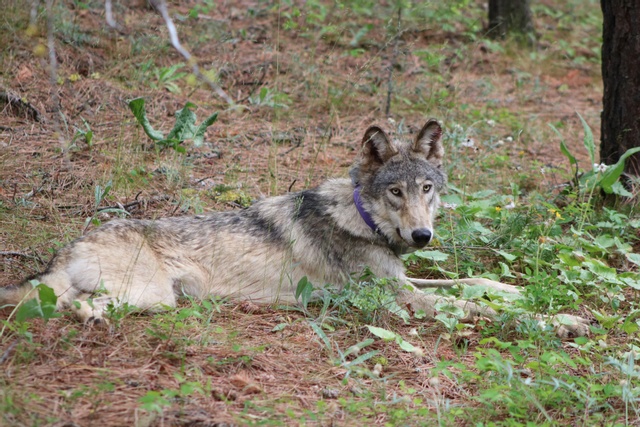 OR-93 was last detected in San Luis Obispo County on April 5.

A gray wolf whose long-distance travels from Oregon to points throughout Northern and Central California thrilled wildlife lovers has gone missing. The radio collar on the wolf known as OR-93 last emitted a ping on April 5 in San Luis Obispo County. State biologists said they're planning to do an aerial search using equipment that can detect the faintest signals. L.A. Times | SFGate.com

In 2020, the coronavirus killed fewer than 300 people in San Francisco. Drug overdoses killed more than 700 — and 2021 is shaping up to be even deadlier. Accidental overdoses in San Francisco have been increasing sharply for years. The 254 deaths recorded between January and April have already surpassed the total for all of 2017. Experts say a primary factor is the rise of fentanyl, a synthetic opioid 50 times more powerful than morphine. S.F. Chronicle | SFist 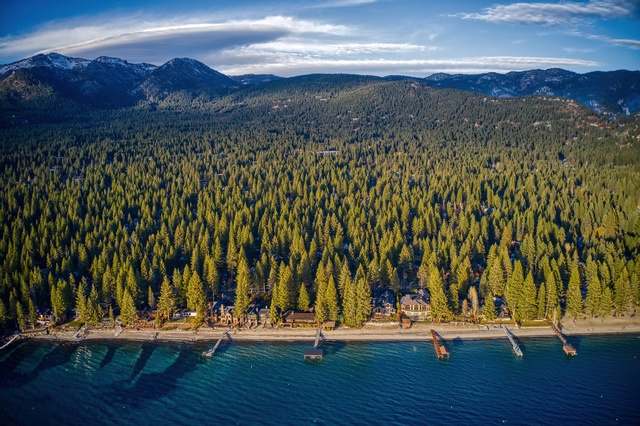 The lakefront properties of Incline Village are a haven for rock stars and Silicon Valley CEOs.

In March, the Kiss frontman Gene Simmons said he was moving from Beverly Hills to Incline Village, joining a well-worn path of the ultrawealthy to the elite hamlet on the edge of Lake Tahoe. The alpine beauty is one draw. But another perk entices rich Californians to the Nevada side of the lake: much lower taxes. It's a place of jarring wealth disparities, where a so-called "Billionaire's Row" of lavish mansions line the waterfront and more than a third of the local high schoolers qualify for food aid. SFGate.com 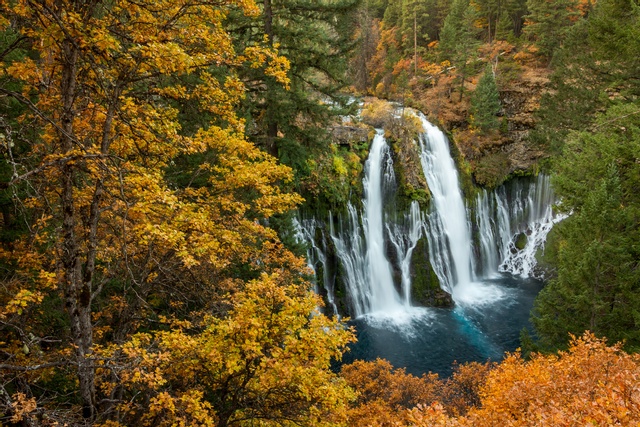 The aptly named Shasta Cascade region is California's waterfall Mecca. Dozens of thundering waterfalls rush through the mountain range, many within an hour's drive of Redding. National Geographic recommended a 177-mile loop that delivers you to five of the most awe-inspiring falls in a single day. Among them is Burney Falls, pictured above, which Theodore Roosevelt dubbed “the Eighth Wonder of the World.”

Last summer, Los Angeles leaders voted to divert $150 million from the police department's budget to study alternatives to traditional policing. Nearly a year later, the city has now agreed to essentially restore the cuts and hire roughly 250 new officers, infuriating activists. The mayor and police chief say the move is necessitated by surging gang violence. City Councilman Marqueece Harris-Dawson, of South Los Angeles, drew an opposite lesson from the crime wave: “I think it actually increases the urgency of the reimagining.” N.Y. Times 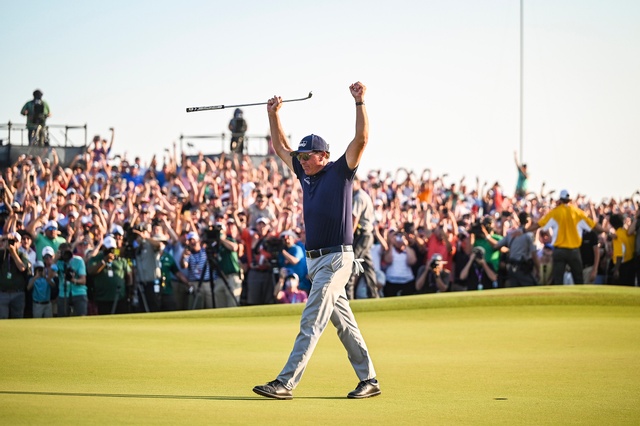 San Diego's own Phil Mickelson made history on Sunday, becoming the oldest golfer, at age 50, to win a major championship. A euphoric scene erupted on the 18th hole at Ocean Course along the South Carolina coastline when Mickelson lofted a 9-iron from the rough to within 16 feet of the hole. As he walked to the green, he was mobbed by fans chanting his name. Two putts sealed victory. Mickelson called the moment unnerving, "but exceptionally awesome.” S.D. Union-Tribune | N.Y. Times

"Mickelson amongst the madness." See fans surge past security. 👉 @PGATOUR

A teen's TikTok video advertising his birthday at Huntington Beach went viral last week, sparking a related hashtag that was viewed more than 220 million times. On Saturday, an estimated 2,500 young people showed up for the party. Things got out of hand. Videos showed people dancing in the streets, climbing on stoplights, and setting off fireworks on the beach. The authorities issued an emergency curfew and arrested about 150 people. “It was lit,” one attendee told a reporter. BuzzFeed News | O.C. Register

The Linda Lindas got a record deal with Epitaph Records.

The all-girl teen punk band lit up the internet late last week with their song “Racist Sexist Boy,” about an upsetting experience one of the girls had at school. They performed it for a sparse crowd as part of an AAPI Heritage Month program at the Los Angeles Library, which posted the video to social media last Thursday. By the weekend, the group with fewer than 10 shows to their name was arguably the most talked about band in America. The video has been viewed more than 8 million times. Variety | L.A. Times 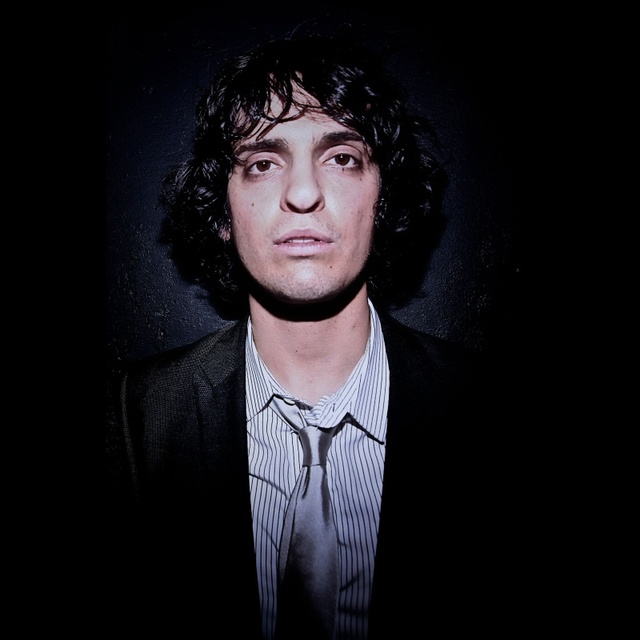 … Eothen Alapatt, also known as Egon, the founder of Now-Again Records, a Los Angeles-based record label that reissues music from around the world — Nigerian fuzz-funk to Swedish hard rock to Brasilian and Iranian psychedelia — as well American funk, soul, and jazz.

A. Big Sur is one of those places that lives up to its reputation. I’m always surprised about how few people I know have been there. Those that have visited always say the same thing when they return: It’s magical, it’s a vortex, it’s a this, it’s a that. One of my favorite albums of the 20th century was made as a result of a trip — literally and figuratively — up there in the 1960s: Damon’s psychedelic masterpiece “Song of a Gypsy.”

Let’s do podcast — there are two that tie for me. The “Cocaine and Rhinestones” episode about Bobbie Gentry, one of the best investigations into fame and musical destiny I’ve ever heard. And the “I’ll Drink To That” episode in which Levi Dalton interviews the Burgundian wine maker Frederic Mugnier, one of the best discussions I’ve found about the soul and spirit of wine-making — and from a skeptic, one with some of the best vineyards in the world, including the sublime Musigny.

One of the best meals in Los Angeles is the barbacoa platter at My Taco, with a large side of goat consommé. I prefer Cacao Mexicatessen for pretty much all of my Mexican food cravings, but that My Taco barbacoa is next-level wonderful.

This one is easy. The musicians David Rose, David Axelrod, and Denny Zeitlin. I would get the conversation started by saying “Hey David Rose, what’s your favorite pre-phylloxera wine that would pair well with Axe’s great production of Harold Land’s ‘The Fox?’” And then I would ask Denny if he agreed with Rose’s pairing. Since we’re living in the land of fantasy, we would then have Rose bring us around his property on one of his miniature steam trains that he used to build with Walt Disney back in the day.

Now-Again's catalog has given new exposure to artists from around the world whose work was not accessible to many. Who are some California artists whose catalog you'd reissue if you could (or are planning to)?

The aforementioned Denny Zeitlin is one hell of a jazz musician, and when I write “jazz,” I don’t mean any one style of jazz. He’s one of those rare, broad-minded musicians who took on every turn that jazz did, and, circa 1970, he recorded a demo album called “The Name Of This Terrain,” in between the “straight ahead” albums he did for Columbia Records and the more experimental, synthesizer-driven fusion albums he issued in the mid- to late 1970s.

It’s one of the greatest albums I’ve ever heard, and it took me 15 years of searching to find a copy of it, and nearly as long to convince Denny that an issue (as reissue doesn’t make sense, semantically — the record never came out) was needed. I hope to get that out later this year. In the meantime, I’ve been enjoying all of the music and wine conversations I’ve been having with Denny quite a bit.