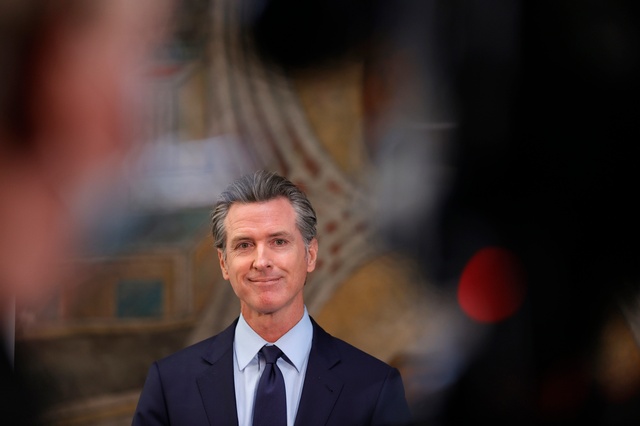 Gov. Gavin Newsom announced a stimulus plan at The Unity Council in Oakland on Monday.

"California is roaring back.”

With a recall election looming, Gov. Gavin Newsom on Monday announced a plan to hand out tax rebates to two-thirds of Californians. Under the proposal, households earning up to $75,000 a year would get $600 payments, with an extra $500 if they have children. The spending is made possible by an astonishing $75.7 billion budget surplus, the result of a surging stock market and a tax structure that leans heavily on top earners who did well during the pandemic. Newsom is calling his blueprint the "California Comeback Plan," notably similar to the "California Comeback" slogan of his recall rival Kevin Faulconer. Politico | A.P. 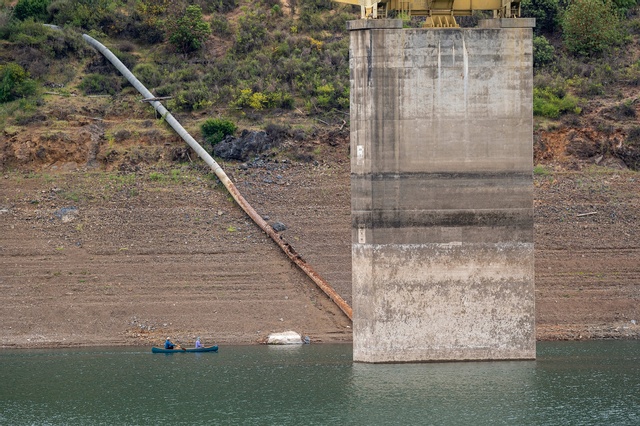 People paddled a canoe along the receded shoreline of Lake Sonoma on April 22.

Newsom expanded his drought emergency declaration to include 41 counties on Monday, encompassing 30% of the state and including parts of the Central Valley where leaders had urged action on behalf of agricultural growers. The measure triggers a series of actions to reduce water usage, while allowing more water deliveries to growers. CalMatters | L.A. Times

The Sierra snowpack, a crucial water source, is now down to an abysmal 8% of average. Weather West

Los Angeles County could reach herd immunity from the coronavirus among adults by mid-July, the county's top public health official said Monday. That's when officials project roughly 80% of residents 16 and older will have gotten at least one vaccine dose. San Francisco is already at 74%. Some experts, however, have avoided talk of herd immunity given slipping vaccination rates across the country. A more realistic hope, they say: to learn to live with the virus while keeping the worst consequences of the pandemic at bay. L.A. Times | S.F. Chronicle 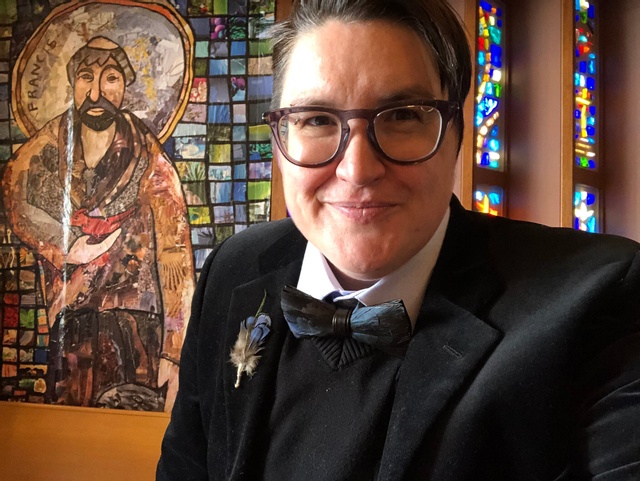 “I am so proud to be a Lutheran,” the Rev. Megan Rohrer told the N.Y. Times.

A California pastor has become the first openly transgender person to be elevated to the role of bishop in a major American Christian denomination. Rev. Megan Rohrer, pastor of Grace Lutheran Church in San Francisco, was elected on Saturday to lead the Sierra Pacific synod in the Evangelical Lutheran Church in America. The church's top leader issued a statement after the vote: “When we say all are welcome, we mean all are welcome.” N.Y. Times | A.P.

When San Francisco's teachers union announced over the weekend the "exciting news" that high school seniors would get the chance to come back to school, it left out a crucial detail: It might just be for one day. The deal calls for seniors to return “for at least one day before the end of the school year” so the district can qualify for $12 million in state reopening funds. Parents are furious. S.F. Chronicle 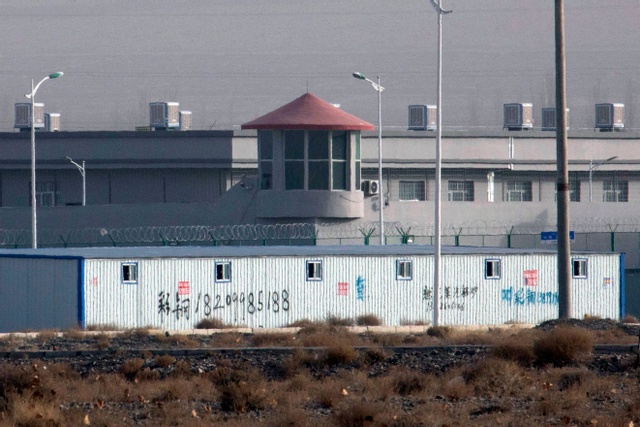 A suspected detention center in China's Xinjiang region, where an Apple supplier operated.

An investigation found that seven Apple suppliers may have used forced labor of Uyghur Muslims and other persecuted groups in China. Apple has insisted that it hasn't found forced labor in its supply chain. But The Information, working with human rights groups, found that one of its factories is next to a detention center with no other way in or out. The Information | The Verge

“One night at dinner, I asked my dad, Morrie, a seemingly simple question: What kind of father was Grandpa Brown when you were a kid? ‘He’s not my father,’ he replied.”

Mitchell Landsberg, an L.A. Times writer, recounted how the 1918 pandemic shaped his Sacramento family, creating secrets and mysteries that endured long after his childhood days were gone. It's a beautiful and tragic story. L.A. Times

A San Luis Obispo police officer was killed and another was wounded while serving a search warrant at an apartment Monday evening, authorities said. Details were sketchy, but a witness told the Tribune that she heard loud banging on a door, police yelling "he has a gun," and then a hail of gunfire. The suspect was killed, officials said. The Tribune | KCBX

NBC announced that it would not broadcast the 2022 Golden Globes, an abrupt move that throws the future of the show into doubt. The Hollywood Foreign Press Association, the group of 85 journalists that hands out the awards, has come under intense scrutiny for its lack of diversity and ethical lapses. In a sign of how damaged its brand has become, Tom Cruise returned his three Globes on Monday. N.Y. Times | Hollywood Reporter 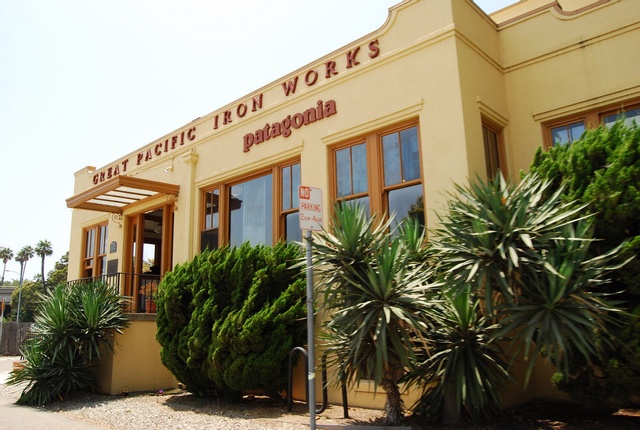 In 1990, Patagonia donated to Planned Parenthood. When angry calls poured in, the Ventura retailer told its customer service workers to respond: "For every call like this we receive, we’re donating an additional $5 to Planned Parenthood.” Patagonia's willingness to take public stands on hot-button issues is anathema to many companies trying to make sales, not headlines. Surprisingly, the strategy appears to have helped its business. L.A. Times 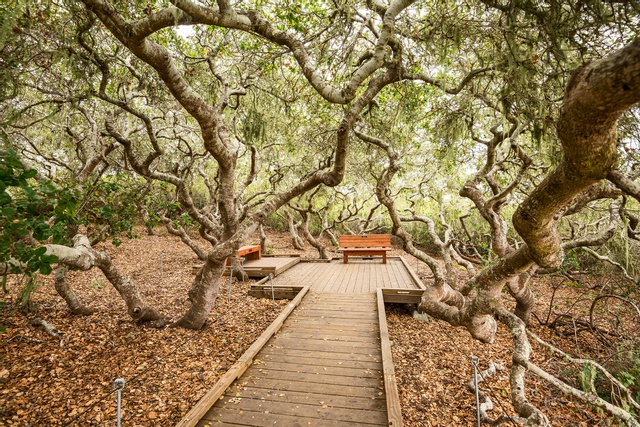 A hidden place to sit in the Elfin Forest Natural Area.

The Elfin Forest in the Central Coast hamlet of Los Osos is known for nooks that appear like something out of a fairy tale. The preserve's gnarled pygmy oaks sprouted as long as 400 years ago, yet remain stunted by the dunes where they took root. A boardwalk weaves through the woodland to overlooks along the edge of an estuary. From there, another natural wonder appears on the horizon: the truly ancient Morro Rock, also known as Gibraltar of the Pacific. 👇 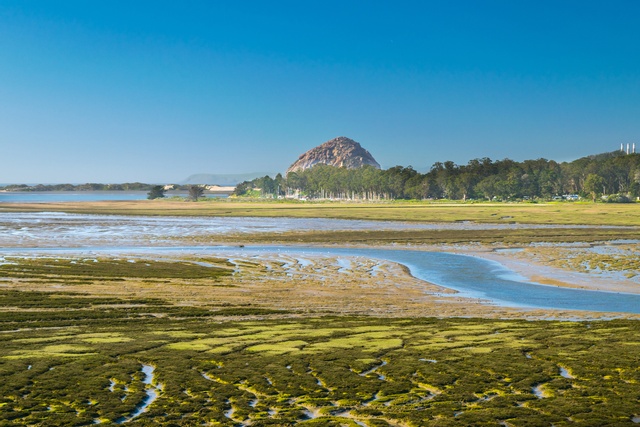 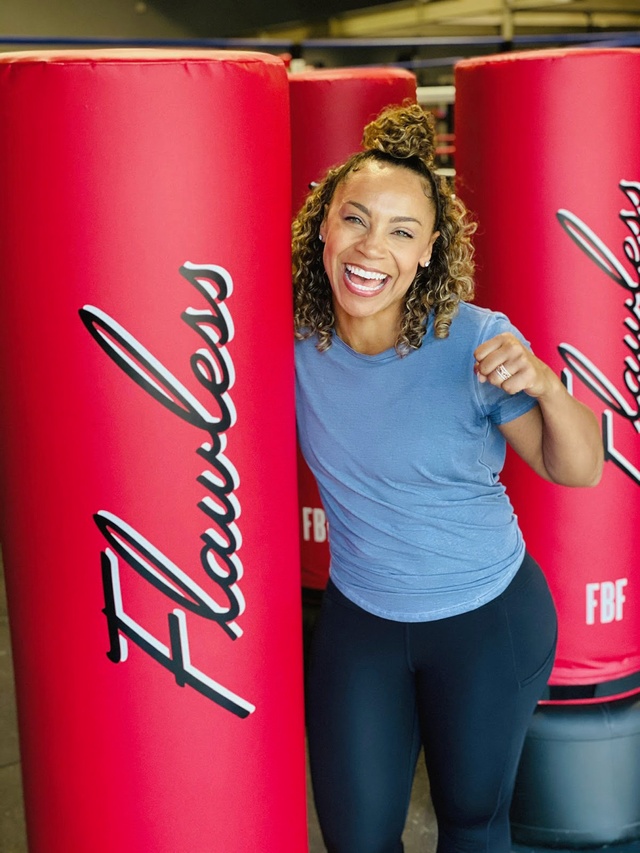 A: I think everyone should visit and experience Yosemite should they ever find themselves in Cali. I love being outdoors and in nature. Yosemite is beautiful year round and never disappoints.

"Atomic Habits" is definitely a game changer and recommended read. It breaks down how and why small habits help you to become successful and overcome obstacles at a bigger level. It uses a lot of reference to athletes, which I can relate to.

I’d say Orphan, Harry’s Cafe, and Tower Cafe. Great food and I love a good breakfast or brunch. Can’t go wrong with any of these local spots. My go to is the avocado scramble at Orphan, french toast at Tower, and traditional breakfast at Harry’s Cafe.

I would invite Bruce Lee, Serena Williams, and George Lucas because they exemplify greatness in their respective craft. I would start the conversation by asking them what their favorite “Star Wars” character is.

Boxing has made some progress in highlighting and showcasing more female fighters in the past decade, but for the most part men are still overwhelmingly marketed as Pay-per-view stars with larger paychecks. How do you think the sport has done as far as gender equality goes, and what could be done better?

All sports in general lack gender equality, and boxing is no different. In boxing, I believe the sport can get better by making the women’s rounds as long as the men’s, and having more women in manager and promoter roles.