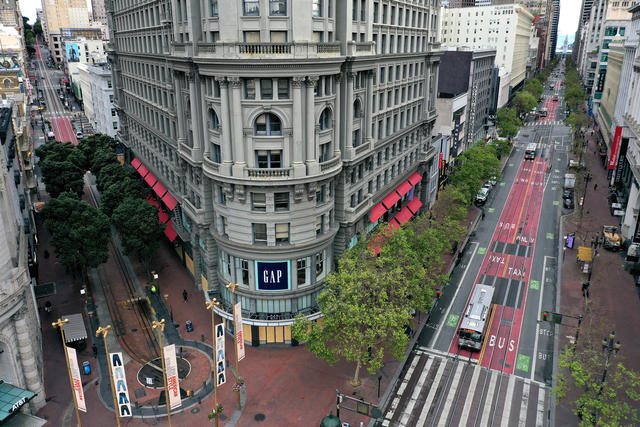 A view of Powell and Market streets in San Francisco on March 30.

In a joint statement, health officials in six Bay Area counties said the region's March 17 shelter-in-place order would remain "through May," with some limited easing to be announced later this week. "We need to stand our ground and maintain our gains," one health official said. "Make no mistake, this virus is still out there and it is still a threat." S.F. Examiner | Mercury News

Mayor Eric Garcetti on Monday said Los Angeles could tiptoe toward normalcy "in the next two to six weeks." LAist | L.A. Magazine

"It is insane. It's so busy and it has been since sunrise."

As for those who gathered on the coast in Orange and Ventura counties over the weekend, Gov. Gavin Newsom wasn't nearly so pleased. "Those images," he said, "are an example of what not to see, people, what not to do if we're going to make the meaningful progress." Newport Beach officials planned to meet today to consider shutting its beaches for the next three weekends. O.C. Register | A.P. 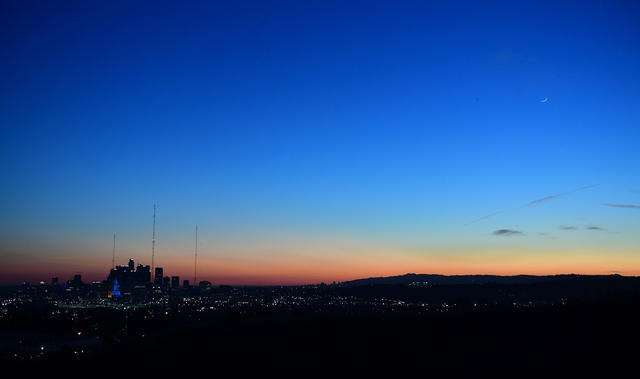 City Hall was lit up in blue last Friday in Los Angeles.

In the Bay Area, the number of hospitalizations hit the lowest point since data became available. In Los Angeles County, the number of coronavirus deaths doubled in the last week. And in Riverside County, nursing homes have now recorded 650 infections. Here are the latest coronavirus totals, according to the S.F. Chronicle and N.Y. Times: 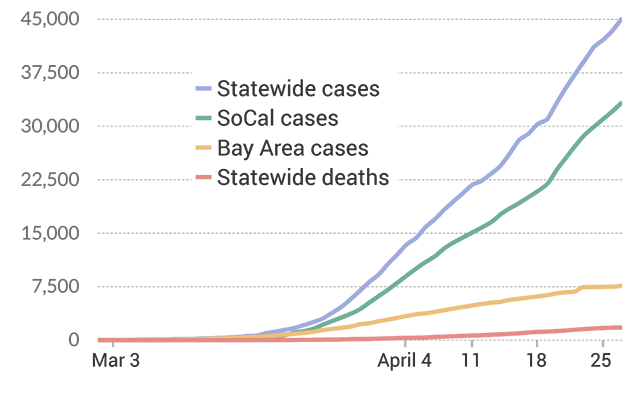 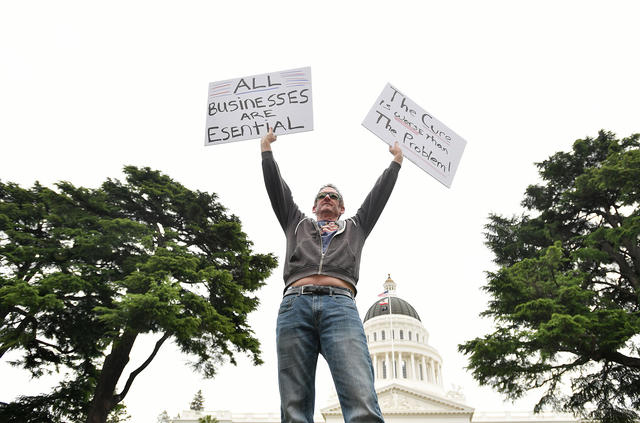 A protester in Sacramento on April 20.

In a letter, elected officials from six north state counties and 14 cities asked Newsom to let them reopen for business. The counties — Butte, Colusa, Glenn, Sutter, Tehama, and Yuba — have recorded just 69 coronavirus cases among a combined population of roughly 500,000 people. On Tuesday, Newsom was expected to share more of his thinking on changes to the stay-at-home order, which he has said were "a few weeks away, not months away." KRCR | A.P.

Drs. Dan Erickson and Artin Massihi, both dressed in scrubs, called a press conference last week to announce what many stuck-at-home Californians wanted to hear: that Covid-19 was no worse than the flu. The claim blew up on social media. A local TV segment got 4.3 million views. Laura Ingraham booked the doctors as guests. But public health experts have debunked the doctors' methodology as ludicrous, akin to estimating the average height of Americans by measuring NBA players. CalMatters

The Lakers, one of the NBA's most profitable franchises, said it returned $4.6 million that it received from a federal program designed to help small businesses weather the pandemic. The team, which applied for the money, faced a backlash after their participation in the Small Business Administration program was publicized. ESPN | Washington Post

USC, meanwhile, said it would keep $20 million in emergency federal grants, even as other universities turned down assistance. USC has a $5.7 billion endowment. CBSLA | A.P. 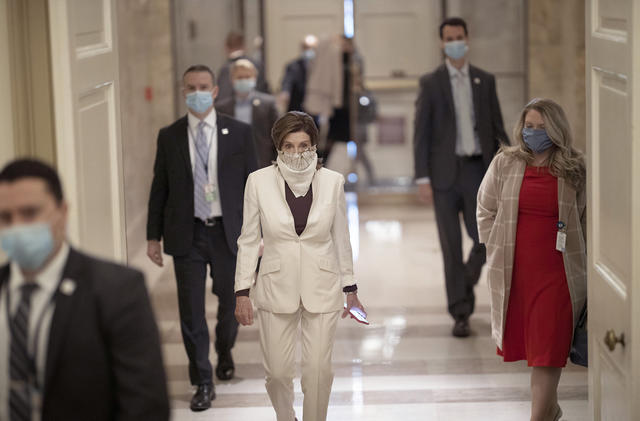 House Speaker Nancy Pelosi said Congress may need to consider a guaranteed minimum income to help people meet their basic needs during the coronavirus pandemic. "Let's see what works, what is operational and what needs attention," she said. "Others have suggested a minimum income, a guaranteed income for people. Is that worthy of attention now? Perhaps so." The Hill | CNBC

A Norwegian couple moved to La Crescenta, an L.A. suburb, last summer. But it wasn't until the pandemic that they got to know their neighbors during a "social distancing happy hour." Kjetil Njoten got to talking with a neighbor, Erik, who has Norwegian ancestry. Turns out, not only were they related, they had the same great-great-grandfather. There were cries of disbelief and tears. Washington Post 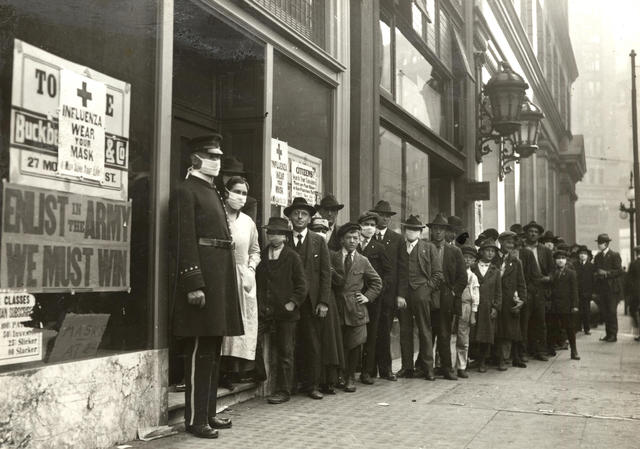 People lined up for masks in San Francisco, which made their use mandatory.

Public health experts have been warning us that it would be a disastrous error to reopen too early. A cautionary tale: During the 1918 influenza pandemic, San Francisco seemed to have the things under control. So the city, under tremendous pressure, lifted restrictions. People celebrated in the streets, removing their masks. Three weeks later there was a dramatic resurgence. NBC News 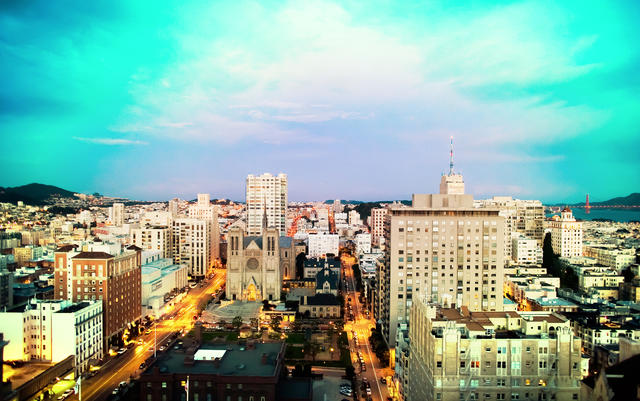 California has its own version of Notre Dame.

Grace Cathedral in San Francisco was constructed in the French Gothic style, with a spire nearly identical to the one that toppled in Paris during a fire last year.

Like Notre Dame, Grace Cathedral rose hand-in-hand with the city of its birth. It was on this day in 1850, as San Francisco was being transformed by the Gold Rush, that the Episcopal parish was formally organized.

Grace Cathedral learned a lesson in 1906 when the Nob Hill structure was destroyed in the great earthquake and fires. It was rebuilt over decades with steel reinforcements and consecrated in 1964, a moment celebrated with a sermon by Dr. Martin Luther King Jr.

But no amount of steel can guard against every danger. By tradition, Grace Cathedral welcomes the public seven days a week. Only twice in the last hundred-plus years have its famed Ghiberti doors been locked shut: during the 1918 influenza pandemic and since mid-March, as the coronavirus swept into California.

Below, a few more views of the cathedral. 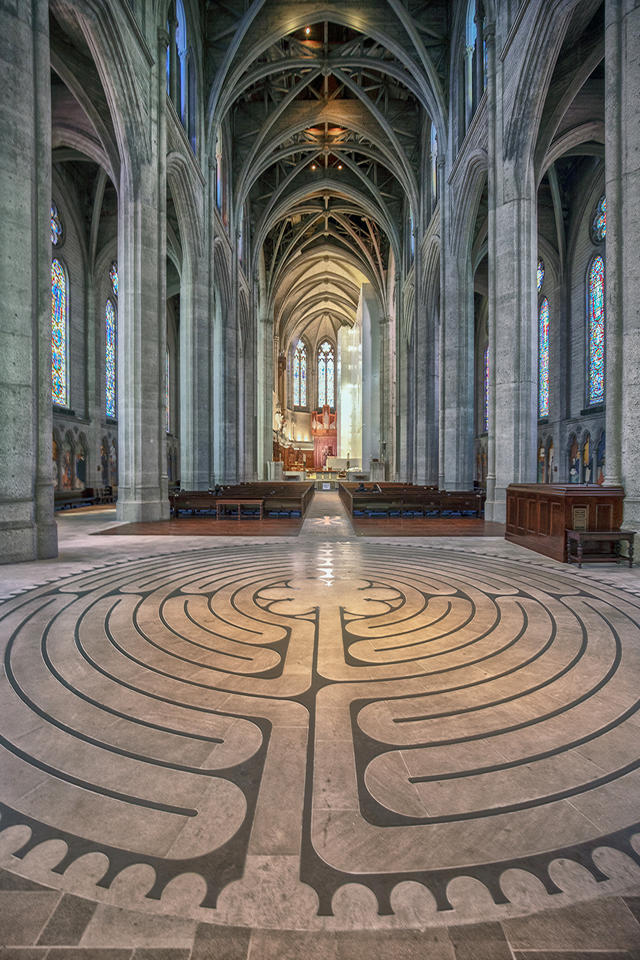 Those who walk a labyrinth inside the cathedral are said to enter a meditative state. 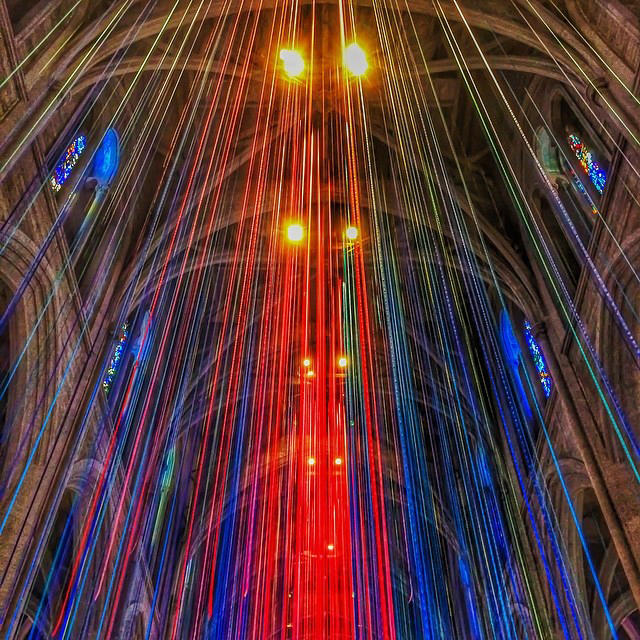 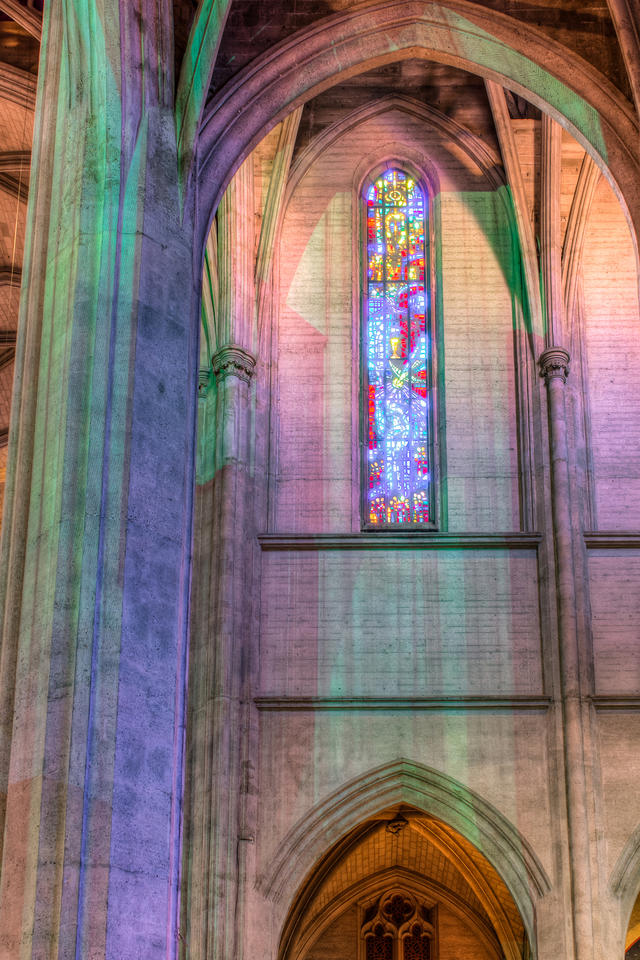 A soaring arch inside Grace Cathedral. 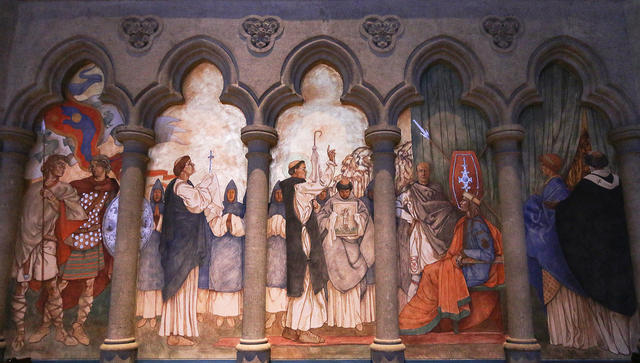 Among many murals inside the church, this one depicts Saint Augustine preaching. 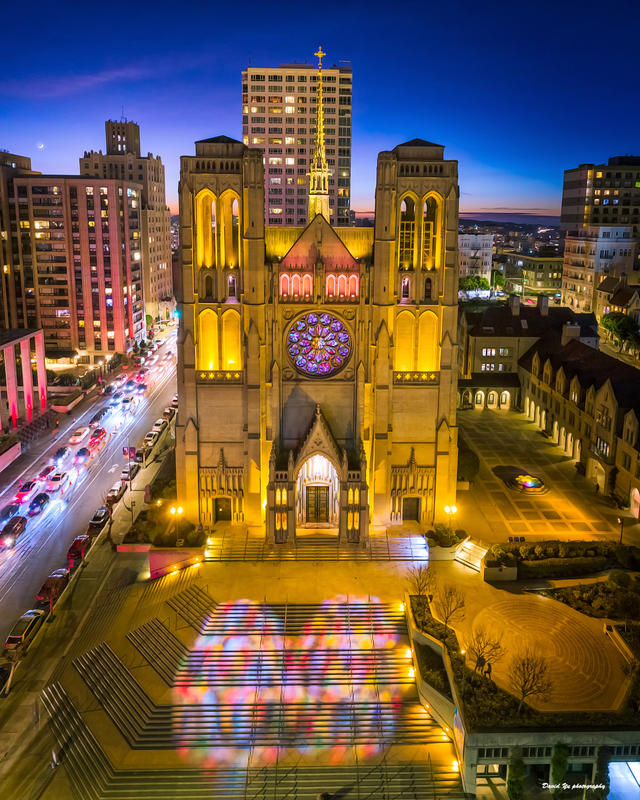 Light reflected through a stained glass window onto the ground outside.