Reminder: This will be a short week. The newsletter will pause July 4–12. Thanks for your patience.

Gov. Gavin Newsom on Monday vowed to continue extending taxpayer-funded health benefits to adults living in the country illegally, ensuring that the issue would get top billing during the 2020 presidential election. Hours later, President Trump told reporters that California treats unauthorized immigrants better than citizens. "It's crazy what they are doing," he said. "And it's mean. And it's very unfair to our citizens, and we're going to stop it." A.P. | Politico 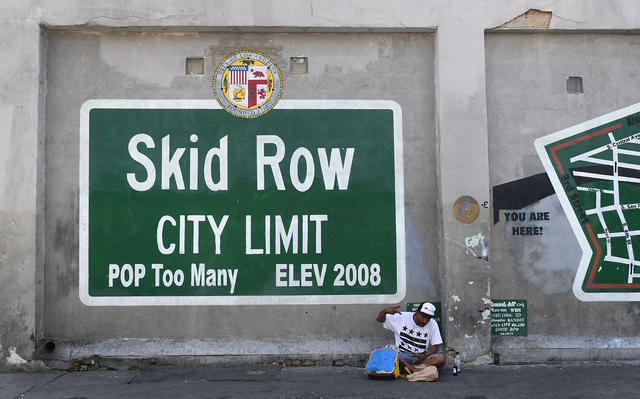 The latest count showed L.A.'s homeless numbers jumped 16 percent in the past year.

In a separate interview with Fox News, Trump painted a harrowing picture of filth and homelessness in Los Angeles and San Francisco, a phenomenon that he said emerged only two years ago. "So we're looking at it very seriously," he added. "We may intercede. We may do something to get that whole thing cleaned up." Washington Post

California's kindergarten vaccination rate actually dropped in the most recent school year. An analysis found that the decline has unfolded as large concentrations of medical exemptions are being granted to children in relatively affluent parts of the state, such as Santa Cruz and Sonoma counties. "I've asked my colleagues and they have either written none or one or two," one doctor said. "Then you see reports of doctors with dozens, which is far outside the norm." L.A. Times 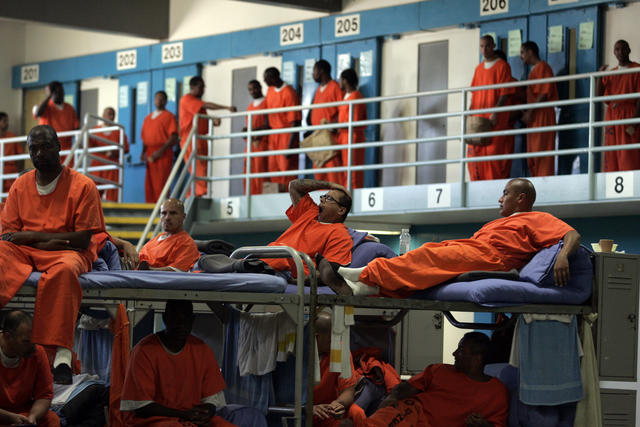 Bunkbeds were arranged in a common area at a state prison in Lancaster in 2010.

"California’s prison overcrowding problems are now a thing of the past." Last week, the state quietly brought home the last of its inmates held in a private lockup northwest of Tucson. At the height of California's prison overcrowding crisis, nearly 10,400 inmates were held out of state. Federal judges ordered California to reduce its prison population in 2009. L.A. Times 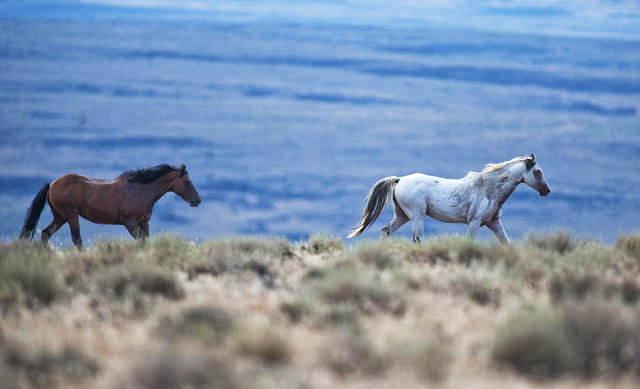 Mustangs have been proliferating within far northern California's Modoc National Forest, competing with cattle for food and ultimately costing ranchers big money. Locals say tensions are rising between cattle owners and horse advocacy groups — and something's got to give. Journal of Alta California 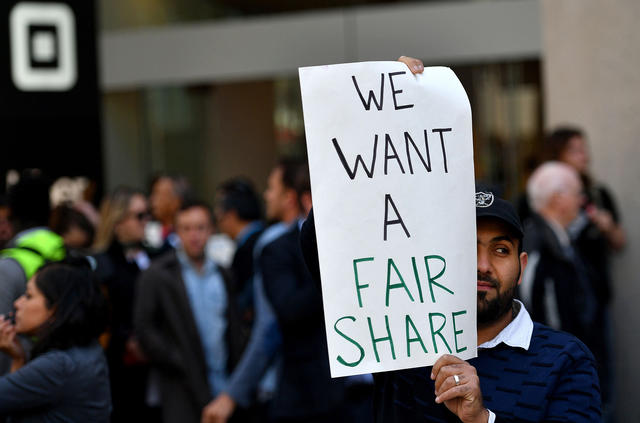 An Uber driver protested for better wages in San Francisco on May 8.

A few large unions have been meeting with Uber and Lyft to discuss a way to exempt the companies from providing full employment protections for drivers, the N.Y. Times reported. The talks have created a deep split within California's labor ranks. At stake are billions of dollars in potential costs for the two San Francisco companies. N.Y. Times | Recode 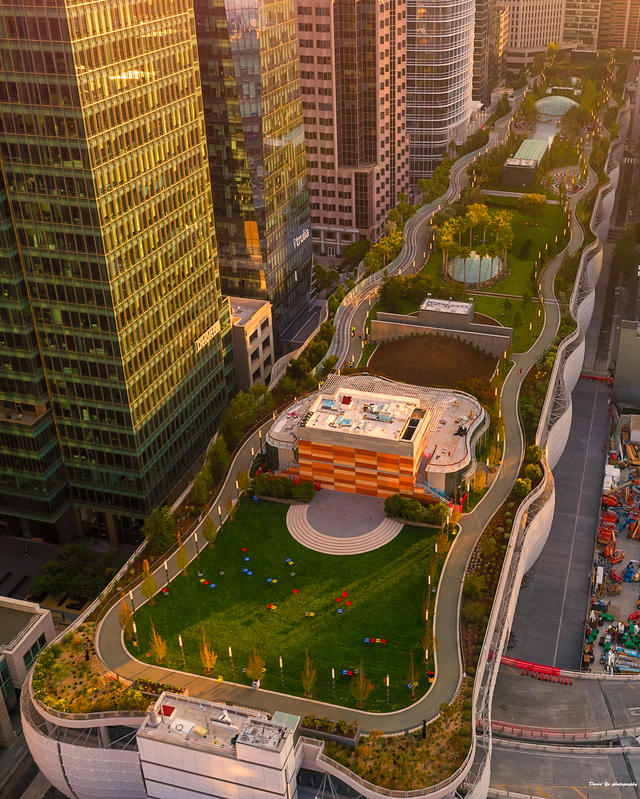 Salesforce Park is on the roof of the new $2.3 billion terminal. 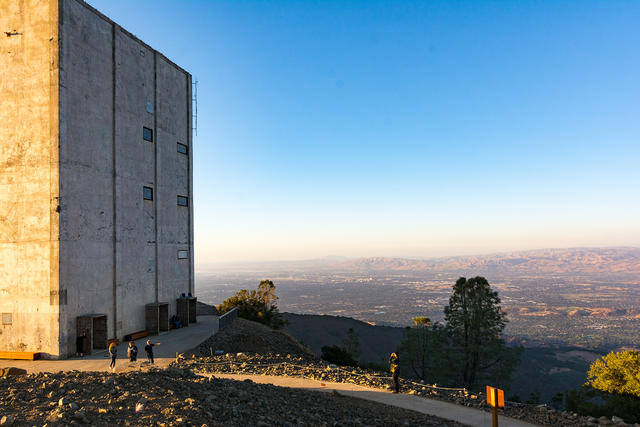 Mount Umunhum is the fourth-highest peak in the Santa Cruz Mountains.

Rising from one of the highest peaks in the Santa Cruz Mountains is an 85-ton concrete cube. In a former life, the structure atop Mount Umunhum surveilled the skies for Cold War bombers, putting an electronic zip into radio and television broadcasts for 250 miles in every direction. Then a couple years ago, the site was opened to visitors. Its mix of history and 360-degree views have made it one of the Bay Area's most popular peaks. Modern Hiker | Mercury News

If you're skeptical whether the Soviets were interested in the Bay Area, check out these crazy old Russian maps highlighting tank-friendly roads and important buildings. Burrito Justice | SFGate.com

Members of a secret Facebook group for Border Patrol agents joked about the deaths of migrants. Created in 2016, the group has roughly 9,500 members. Among the messages were instances of: 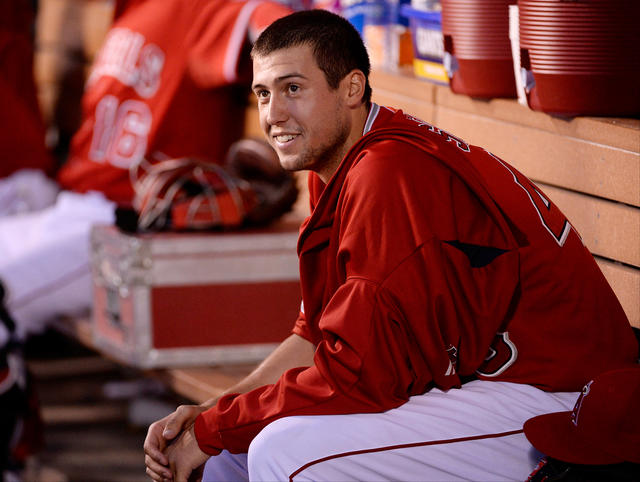 The Angels' Tyler Skaggs was remembered as a fierce competitor with a dry wit.

Tyler Skaggs, a starting pitcher for the Los Angeles Angels, was found dead in a Texas hotel room at the age of 27. Authorities did not provide a cause, but they said neither suicide nor foul play was suspected. The baseball industry was stunned by the death of Skaggs, a product of Santa Monica High who was approaching the prime of his life. "Tyler was one of the bright, young lights in this world," former Angels manager Mike Scioscia said. L.A. Times | O.C. Register

A 56,500-square-foot chateau in Los Angeles's Holmby Hills neighborhood sold for $120 million — the highest home price in the county's history. "Simply put," the L.A. Times wrote, "it’s a mammoth price for what is the largest home in L.A. and among the largest single-family homes in America." L.A. Times | Hollywood Reporter 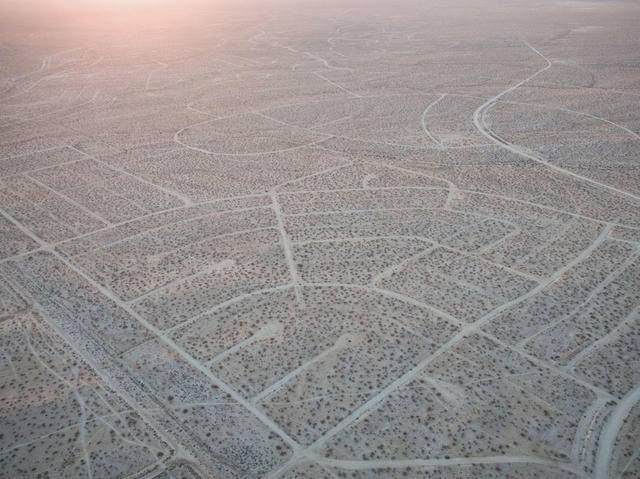 In the 1950s, a Czechoslovakian sociologist had a vision to create California's next big metropolis. He acquired about 130 square miles of desert north of Los Angeles and dubbed it California City. But the people and jobs never materialized. Today, it remains as one of California's most surreal landscapes: a virtual ghost city of dirt roads and unbuilt lots. Photographer Chang Kim captured a fantastic series of images of California City called "Utopia Incomplete." ChangKimPhoto.com | aperture 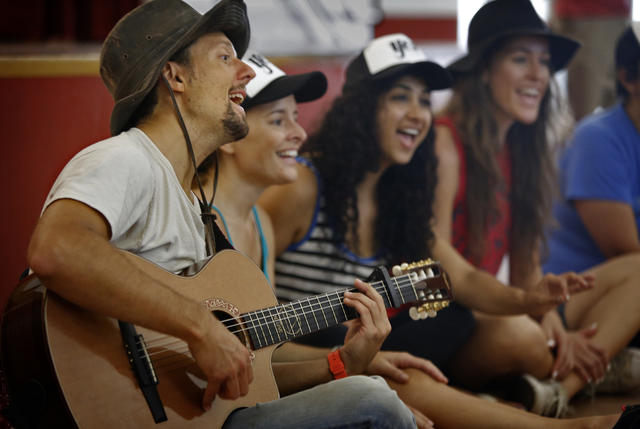 Jason Mraz sang at a San Diego elementary school in 2014.

Today I learned: Jason Mraz, singer of the infectious mega hit "I'm Yours," lives a double life as an avocado farmer outside San Diego.

It's more than a hobby; he supplies Chipotle. After catapulting to stardom from his beginnings in the San Diego coffeehouse circuit, Mraz bought some land in Oceanside as a retreat. The avocado farming started as a hobby. Today, the 17-acre Mranch, as he calls it, produces more than 30,000 pounds of the fleshy fruit a year. A couple years ago Mraz added another crop: about 2,500 coffee bushes, making him part of a burgeoning movement to commercialize coffee growing in California. San Diego Magazine | Modesto Bee 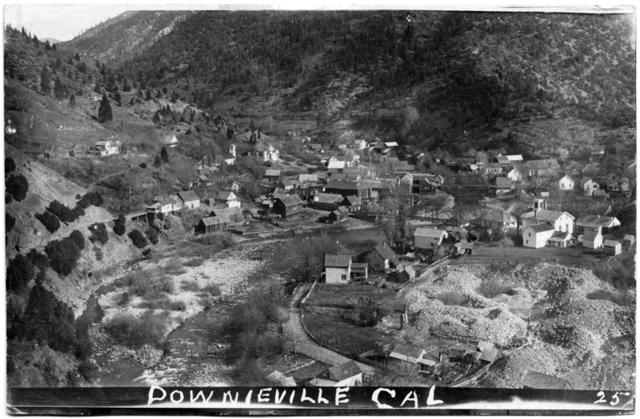 Downieville in Sierra County, seen in 1914, was once replete with gambling halls and saloons.

It was on this week in 1851 that Josefa Segovia was lynched — the only hanging of a woman in California history.

The story began with July Fourth celebrations in the northern Sierra mining town of Downieville. After a day of hard drinking, things got rowdy. At some point, a Scotsman named Fred Cannon and his companions were out carousing when they burst into the adobe home of Segovia, a Mexican woman about 25 years of age. She fended off the men, and in the morning, Cannon returned to apologize — or finish what he started. The history is murky.

Either way, Segovia drew a Bowie knife and plunged it into Cannon's chest, killing him. A clamor arose for vengeance. When a San Francisco lawyer stood atop a barrel and urged restraint, the bloodthirsty crowd kicked the barrel out from under him. 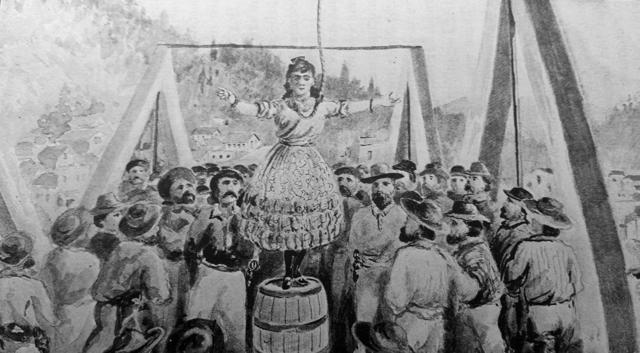 A depiction of Josefa Segovia's lynching in 1851.

A hastily assembled jury found Segovia guilty of murder and a scaffold was erected on a bridge over the Yuba River. According to one account, she placed the noose around her own neck, said "Adios Señores," and stepped into eternity.

Historians later placed Segovia's killing within the broader wave of anti-Mexican lynchings across the American West. But few details of her experience have survived. As such, she has remained largely a ghost story haunting the old gold country. SF Weekly | The British Library