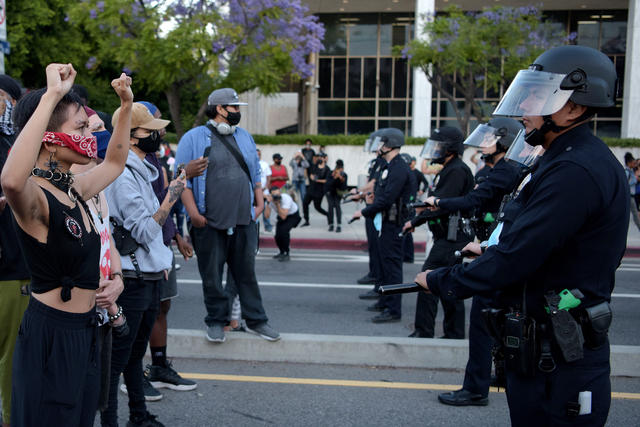 Protesters held up their fists in front of a row of police officers in downtown Los Angeles on May 27.

"Defund the police," a once-obscure slogan, has been gaining traction in the George Floyd protests. Now, Los Angeles leaders say they are looking to cut up to $150 million from the LAPD budget as part of an initiative to reinvest in the black community. Opponents say recent rioting shows why the city needs the force it has. "10,000 officers were barely able to keep the peace," one council member said. L.A. Times | L.A. Magazine

Early Tuesday, police officers responded to reports of looting at a Walgreens in Vallejo, where they engaged a 22-year-old man named Sean Monterrosa. He appeared to have a handgun in his waistband, officers said. Feeling threatened, one of them fired five rounds, killing him. On Wednesday, Vallejo's police chief revealed new details: Monterrosa was on his knees when he was shot, and he didn't have a gun. It was a hammer. Vallejo Times-Herald | A.P. 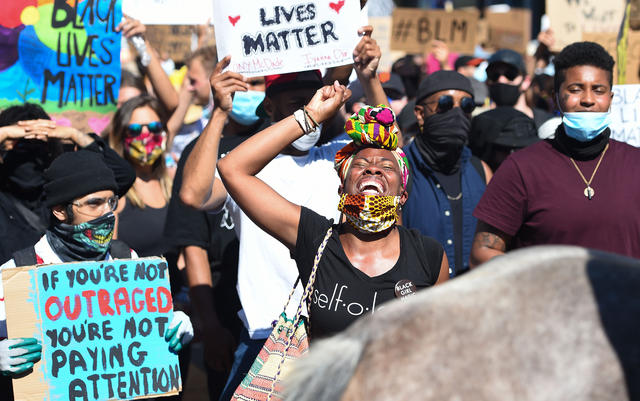 Protesters chanted against police brutality in San Francisco on Wednesday. 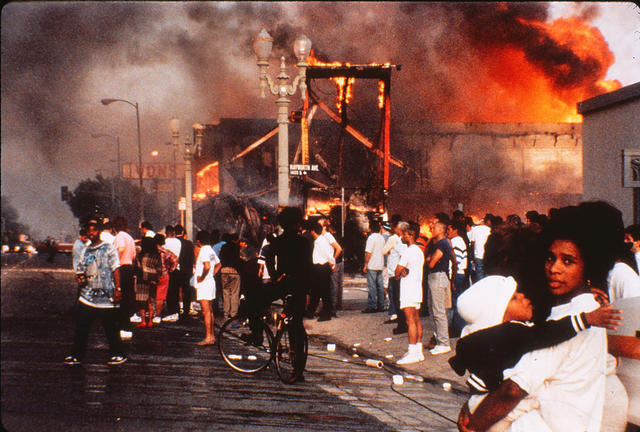 Los Angeles burned on April 30, 1992, after the acquittal of four officers in the beating of Rodney King.

The racial unrest in Los Angeles has drawn comparisons to the riots of 1992. But the geography of chaos has been very different. In 1992, South Los Angeles went up in flames. This time around, not only has the violence been much less pronounced, protest leaders made a very deliberate choice to bring their message to Los Angeles's largely white and rich Westside. L.A. Times | LAist | N.Y. Times

An Orange County sheriff's deputy working at a protest in Costa Mesa was seen wearing a patch for the Three Percenters, an extremist far-right paramilitary group. After photos and video of the officer spread online, Sheriff Don Barnes said such logos "contradict the values of the Sheriff's Department." The deputy was placed on administrative leave. Voice of OC | O.C. Register

In the last week, George Floyd murals have been draped on urban canvases in cities across California. Below, a short tour. 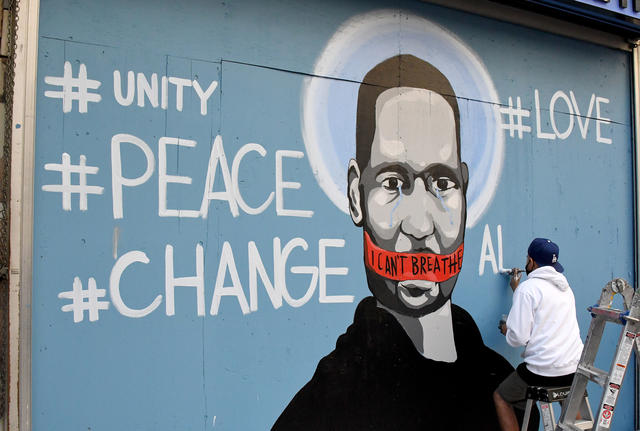 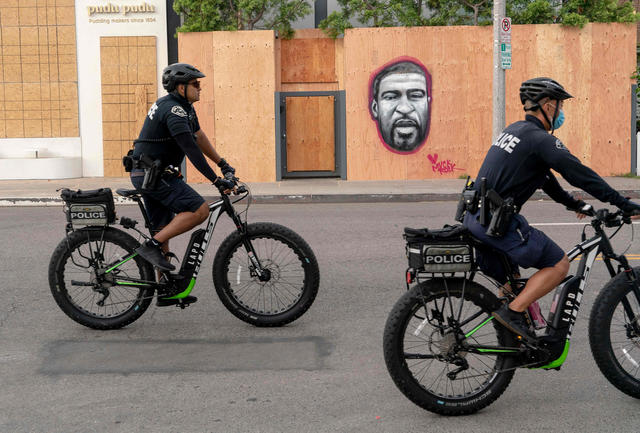 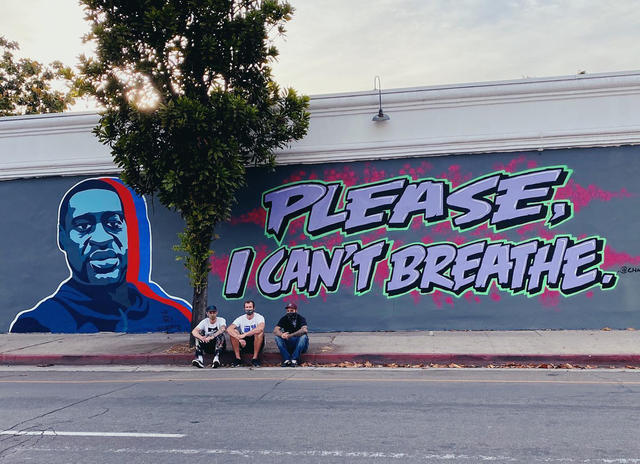 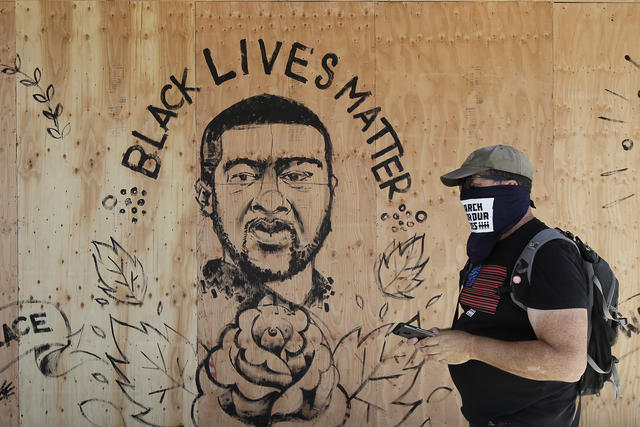 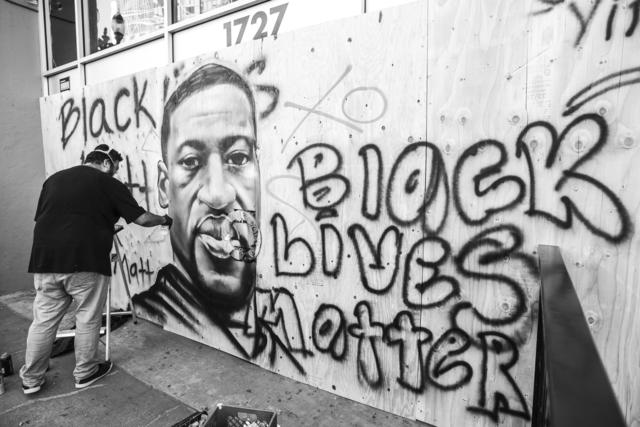 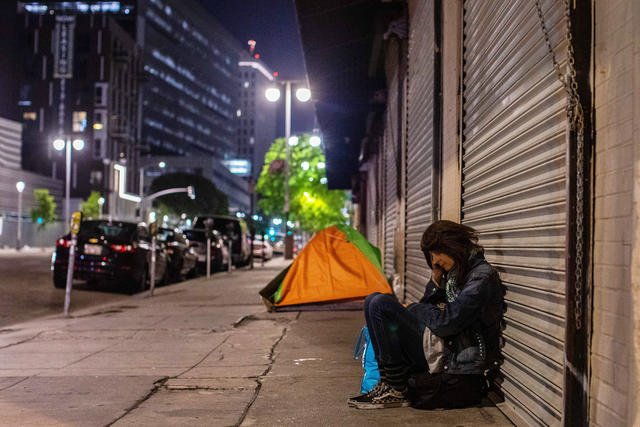 A homeless woman slept in Skid Row on May 16.

California's governor is pushing to parlay federal coronavirus relief into a solution to the state's homelessness crisis. The idea is to send counties $600 million in federal funding starting next month — before the aid dries up — to purchase vacant hotels and turn them into permanent housing. A major hurdle: Nimby opposition. Politico

Newsom signed an executive order that requires counties to have drop boxes open to receive ballots nearly a month before the Nov. 3 election. Walk-in polling stations must open at least three days before the election. The decision follows an earlier order requiring mail-in ballots be sent to all registered voters. Republicans are fighting that in court. Bloomberg | A.P.

Snap became the latest tech company to restrict the messaging of President Trump. The Santa Monica company, which makes the Snapchat app popular among young users, announced that it would no longer promote Trump's account after his incendiary remarks over the weekend. "We will not amplify voices who incite racial violence and injustice," it said. A Trump aide responded: "Snapchat is trying to rig the 2020 election." N.Y. Times | recode 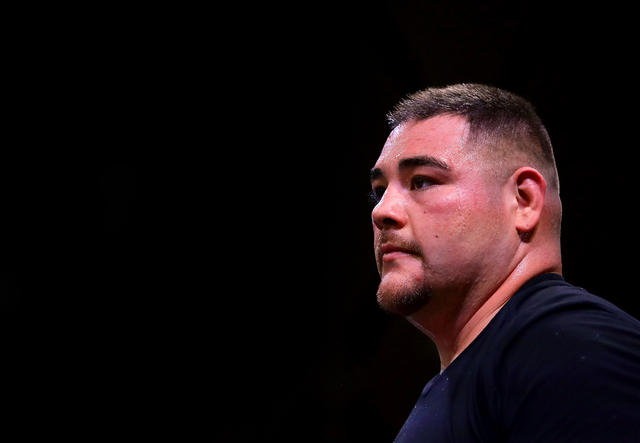 After his unlikely win, Andy Ruiz Jr.'s team was ready to conquer the world. It wasn't to be.

In the summer of 2019, Andy Ruiz Jr. — the hefty son of Mexican immigrants from California's Imperial Valley — stunned the boxing world by walloping one of the sport's biggest stars at Madison Square Garden. The new heavyweight champ of the world, he was dubbed "Rocky Mexicano." There was a parade. It was the best story in sports. A year later, a reporter set out to find Ruiz and discovered that something was awry. Ruiz seemed to have checked out. "I didn't give up on Andy," his former trainer said. "He gave up on himself." ESPN 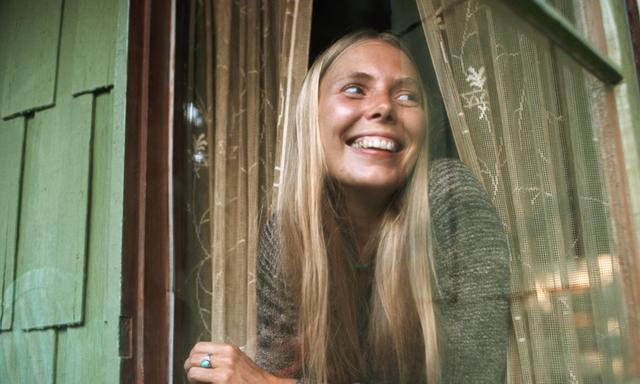 In the 1960s and '70s, a neighborhood in the Santa Monica Mountains hosted an extraordinary bubble of musical innovators. The new two-part documentary "Laurel Canyon" uses performance footage, home movies, and artist interviews to craft what the L.A. Times called "the most comprehensive and musically satisfying document of a notably insular scene." (The only way to see it is to subscribe to Epix. But it looks like first week is free). L.A. Times | Rolling Stone