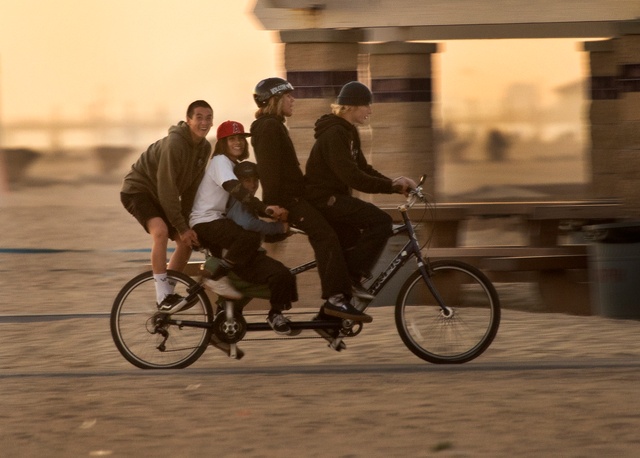 Kids rode a bike at Huntington State Beach on Feb. 17.

California's coronavirus test positivity rate is now the lowest of the entire pandemic. The rate of tests coming back positive, averaged across seven days, fell to 2.3% early this week, a remarkable figure given that it was above 14% in January. Los Angeles County, once the heart of the U.S. pandemic, achieved its own milestone on Monday: fewer than 1,000 new cases, a record low.

A few other statewide metrics as of March 1:

"María Salinas Cruz rested her hands against the glass door of her husband’s hospital room on Jan. 28 as a respiratory therapist disconnected the ventilator that kept Felipe Cruz alive. 'Don’t be afraid, Felipe,' she said in Spanish as he lay dying. 'Be brave, my love, brave until the last moment.'"

The N.Y. Times Magazine published a powerful series of photos from the homes and hospital rooms of those hit hardest by the pandemic. 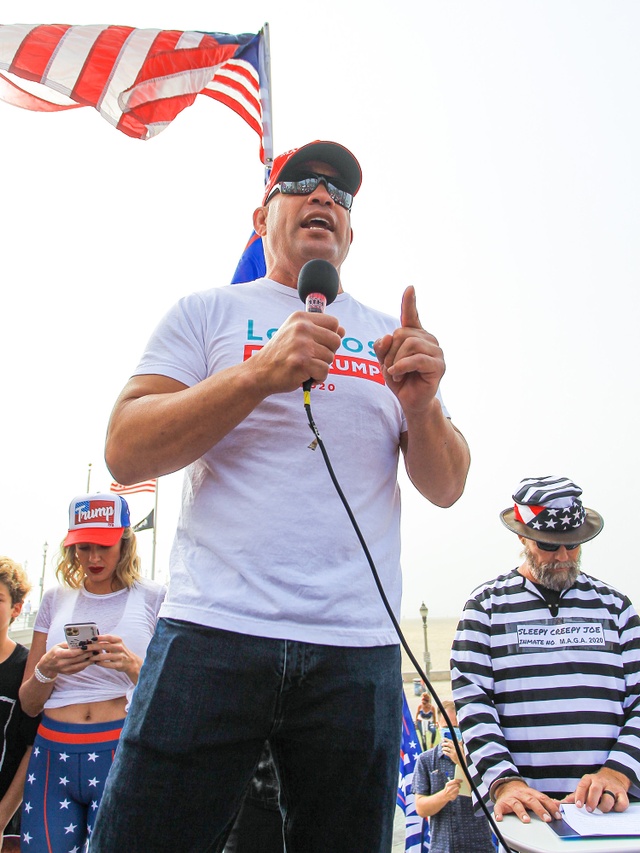 A few things the former mixed martial arts star Tito Ortiz has said: wearing masks cause rather than prevent disease; the coronavirus is a form of population control; and "hell no" he will not be taking a Covid-19 vaccine.

Yet in Huntington Beach, where Ortiz sits on the city council, people love him. “He’s the local version of Donald Trump,” a political scientist said. "It’s not just about his political ideology. It’s about his personality. He’s plain-spoken. He’s physically imposing. He cuts an interesting form politically.” L.A. Times 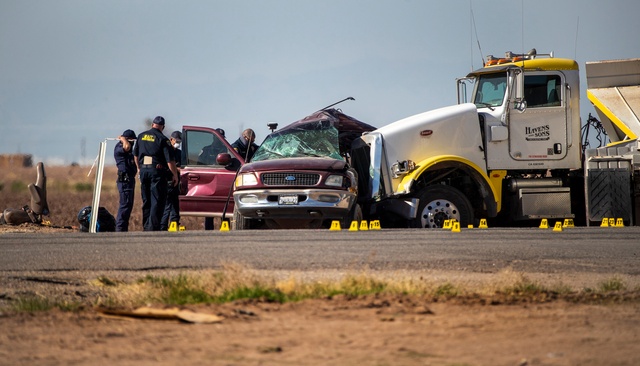 Officers investigated the site of the crash in Holtville on Tuesday.

A horrific collision between a tractor-trailer and an SUV crammed with 25 passengers left at least 13 people dead in the agricultural southeastern corner of California on Tuesday, officials said. Ten of the dead were Mexican nationals. A CHP officer said the Ford Expedition, which has seating for eight passengers, pulled into an intersection and the path of the rig. The authorities were investigating whether human smuggling was involved. USA Today | A.P. 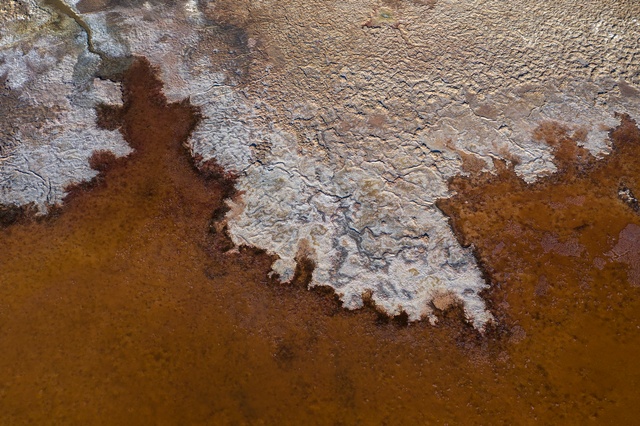 An aerial view of the shrinking Salton Sea on Feb. 26.

“All indications are that we are in a drought.”

After a disappointingly dry February, state water officials said California appeared destined for a critically dry year with a meager snowpack and reservoirs registering the effects of a lackluster rainy season. A snow survey Tuesday showed the snowpack, which supplies a third of California's water, at 61% of the historical average. Some urban water agencies are already asking customers to cut back. A.P. | Mercury News

After an Asian American family moved into an upscale Orange County neighborhood a few months ago, they started getting nightly visits from teenagers. They rang the doorbell, yelled, pounded on the door, and told Haijun Si to “go back to your country.” When a neighbor heard what was happening, she sought volunteers to guard the Si house from 6 p.m. until midnight every night. Neighbors signed up in droves. L.A. Times 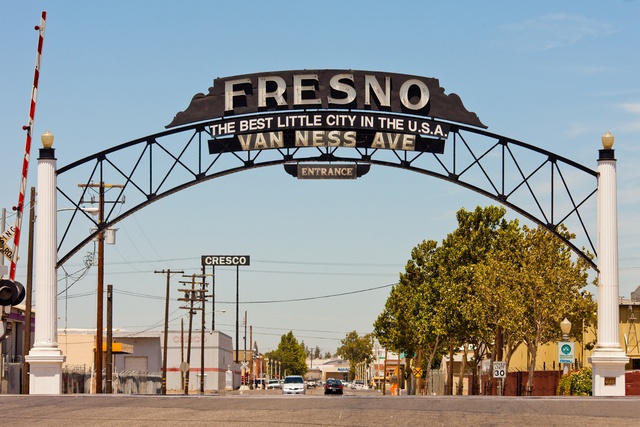 Rents have been rising in Fresno.

Fresno crams more people into its homes than any large city in America, according to an analysis of Census Bureau data. On average, there are 3.57 people per household in Fresno, the report found. Crowding into ever smaller spaces has been a common strategy for coping with California's affordability crisis — and not just in agricultural towns. Also ranked among the top 10 cities for fullest homes: Los Angeles, San Jose, Sacramento, and San Diego. Fresno Bee

Newly released body cam footage showed Salvador Sanchez, then an off-duty police officer, being questioned after he fatally shot an intellectually disabled man inside a Riverside County Costco in 2019. As he lay on the ground, Sanchez said he thought he was shot (he wasn't); that he thought the man, Kenneth French, was armed (he wasn't); and that he didn't know how many shots he fired (it was 10). Then he asked for a lawyer. French's family wants Sanchez charged with murder. Press-Enterprise | NBC News 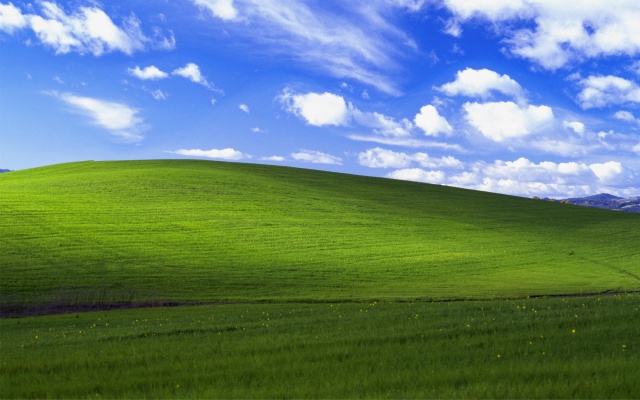 One afternoon in 1996, Charles O’Rear pulled over along a country road in Wine Country and took a picture of an iridescent green hillside set against a blue sky. He uploaded the image to a stock photo agency and forgot about it. Then Microsoft paid a handsome sum for all rights to the photo in perpetuity. Recently, a reporter went to check in on the hill that appears in perhaps the most-viewed picture of all time. SFGate.com 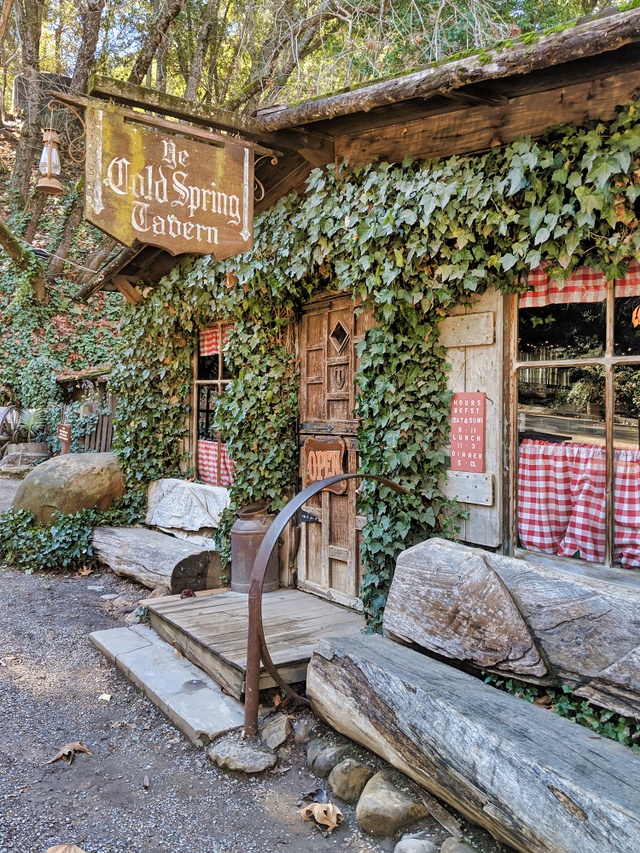 Cold Spring Tavern in Santa Barbara is a California treasure.

One of California's most interesting restaurants is tucked in the hills above Santa Barbara. Cold Spring Tavern was built along a stagecoach route in 1886, and it hasn't changed much since then. The saloon's wood-shingled exterior is held up by weathered tree boughs. The interior could double as a museum. There are antlers, gas lanterns, a liquor cabinet from a Pacific shipwreck, and a roundtable from Gene Autry's house. Stay long enough, it's said, and you'll hear tales of the time Roy Rogers tended bar for a day without anyone noticing, or, in the mark of a true roadhouse, when a rowdy Merle Haggard got thrown out. Eater Los Angeles 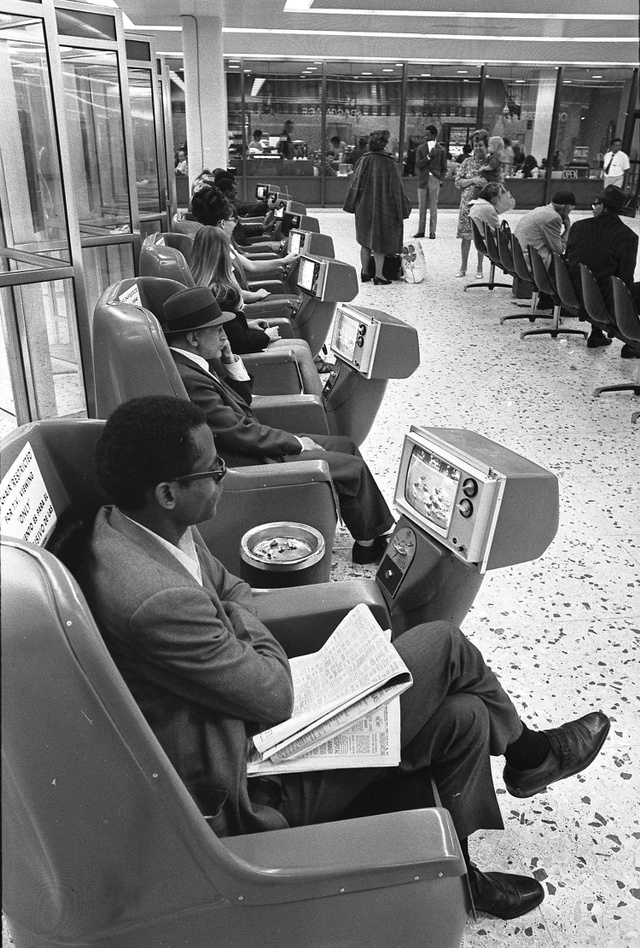 People watched televisions at a Greyhound Bus terminal in Los Angeles in 1969.

Before the iPhone, there was the Tel-A-Chair.

A variation of the coin-operated televisions common in hotel rooms, the Tel-A-Chair was invented in 1969 by John Rice, a Sacramento tinkerer who was struck by inspiration during a three-hour wait at the Los Angeles Airport.

"You can only eat so much pie and ice cream so we wandered all over the airport, looked at everything, and still had an hour to kill," he explained to Parade magazine. When Rice got home, he mounted a small TV to an armchair, acquired a patent, and sold the idea to airports, hospitals, and bus companies.

At 10 minutes for 10 cents, the television chairs were good business. But they also attracted problems. Kids snapped the dials off, and the security guards at bus terminals found their job duties redefined as their shifts were spent shooing sleepers from the Tel-A-Chairs.

The L.A. Times took note of the trend in an article on June 26, 1970. "Television is creeping up on us," it began, "lurking around every corner, getting in the way of concentration, conversation, human affection. There seems to be no place left to go to clear the cobwebs from our mass media-sized minds."

If only they knew what was coming.