Good morning. It's Thursday, May 7.

Please note: The newsletter will pause for a long weekend. Back in your inbox on Tuesday.

After Yuba and Sutter counties allowed businesses to reopen on Monday, California regulators showed up at a number of restaurants and ordered them to shut down. Hair salons received emails: Close up shop, they read, or face "disciplinary action against their license." County leaders were infuriated. Sacramento Bee | S.F. Chronicle 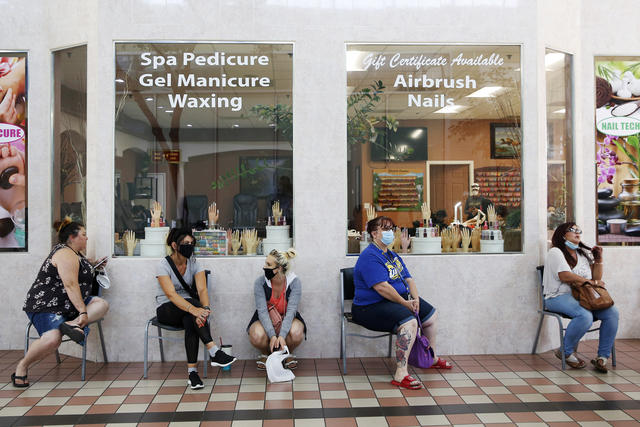 Customers waited to get their nails done at the Yuba Sutter Mall on Wednesday.

On Wednesday, a Yuba City mall became the first in California to reopen. Hundreds of people streamed inside, many without masks. A line formed at the nail salon. A.P. | KCRA

On March 16, a union leader in San Luis Obispo sought to derail a vote on an ordinance discouraging natural gas by threatening to hold a "massive protest." In an email to city officials, Eric Hofmann, who leads a utility workers union, wrote, "Please don't force my hand in bussing in hundreds and hundreds of pissed off people potentially adding to this pandemic." The vote was delayed. The Tribune | L.A. Times 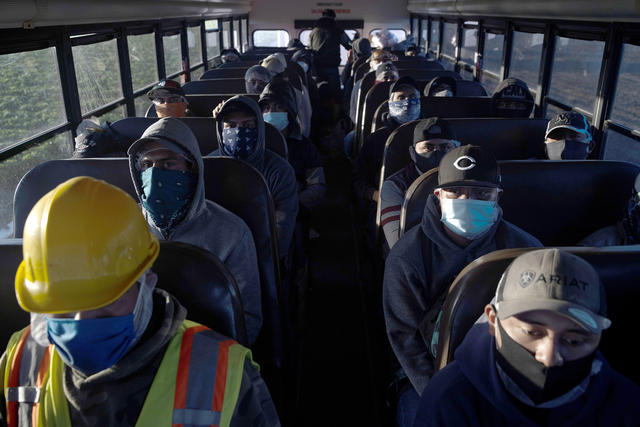 Farm laborers arrived for the start of their shift in the Salinas Valley on April 28.

N.Y. Times opinion: Can immigrants toiling in the fields be simultaneously deemed "essential" and "illegal?" "True to form," wrote former farm worker Alfredo Corchado, "America still wants it both ways. It wants to be fed. And it wants to demonize the undocumented immigrants who make that happen."

The first death at an ICE detention center, 138 infections at a meat plant in Hanford, and data show that nearly a quarter of Monterey County cases are among farm workers. Here are the latest coronavirus totals, according to the S.F. Chronicle and N.Y. Times: 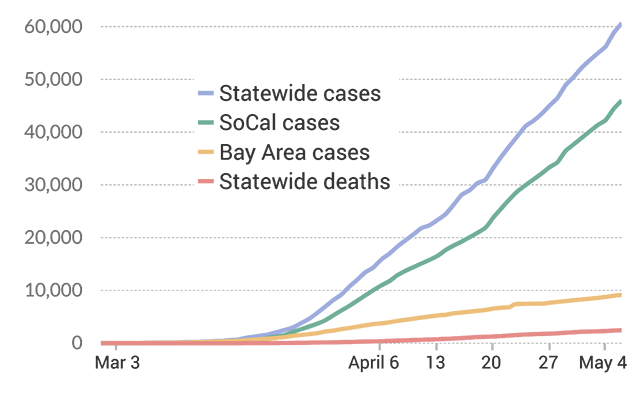 For the Yurok, California's largest Native American tribe, the pandemic has been economically agonizing, as its casino and other tourist attractions have been shuttered. Yet they remain deeply wary of ending the shutdown. "We can't risk the life of even one single elder," one leader explained. "The amount of knowledge they have and what they mean to our community is invaluable." Sacramento Bee

San Francisco officials responded to a controversy over reports that they've been providing free drugs and alcohol to homeless people staying in hotels rented by the city. It's true, they said, but necessary. The reason: The recipients are addicts, and the substances ensure that they stay indoors and avoid spreading the coronavirus. "They're doing San Francisco a great service by staying inside," a health official said. S.F. Chronicle | KTVU 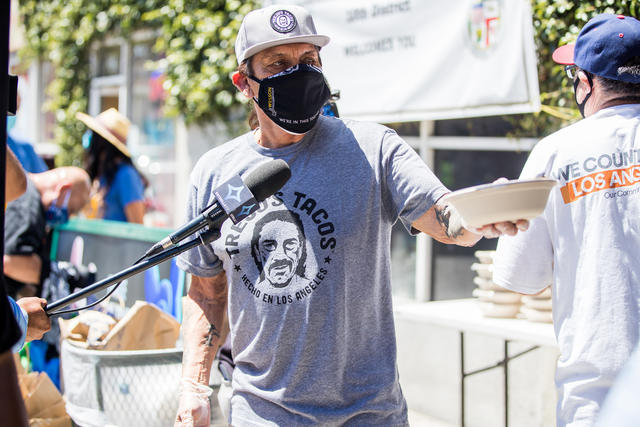 During an arrest in Los Angeles's Boyle Heights last month, a male suspect appears to be complying with the orders of two officers. A male officer tells him, "Stop fighting." The suspect responds, "Ain't nobody fighting." Then the officer unleashes a torrent of punches to the man's head and body. After video of the confrontation stoked outrage, an investigation was opened. L.A. Times | Boyle Heights Beat 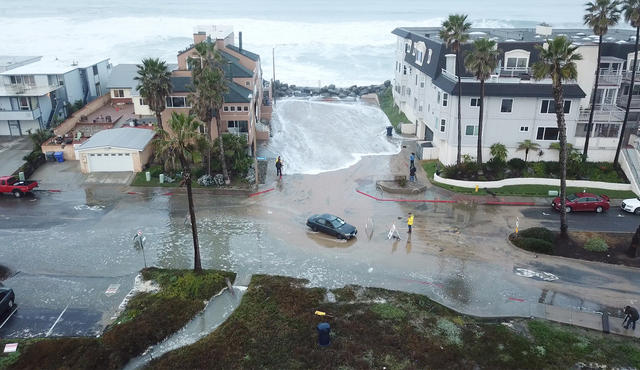 The ocean surged into Imperial Beach.

"The reality is: The water is coming."

Under the most extreme scenario, more than 42,000 homes along the California coast could be submerged by sea level rise within a few generations. Yet rather than retreat from the shore, some communities are fighting for the right to armor the coast with barriers. That would mean smaller beaches for the public, but it's a trade many homeowners are prepared to make. CalMatters

In Malibu, lifelong residents recall running up and down Broad Beach as kids. Now, they have to wait for low tide to find patches of sand to walk on. They joke that it should be renamed Slim Beach. Curbed Los Angeles

Ted Howze is the Republican standard-bearer in a fiercely contested House race in the Central Valley, endorsed by California's top Republican, Rep. Kevin McCarthy. Now Howze's Facebook posts have surfaced: In them, he calls Islam a "death cult," mocks a survivor of the Parkland high school shooting, and accuses Rep. Maxine Waters of "hitting the crack pipe." Politico 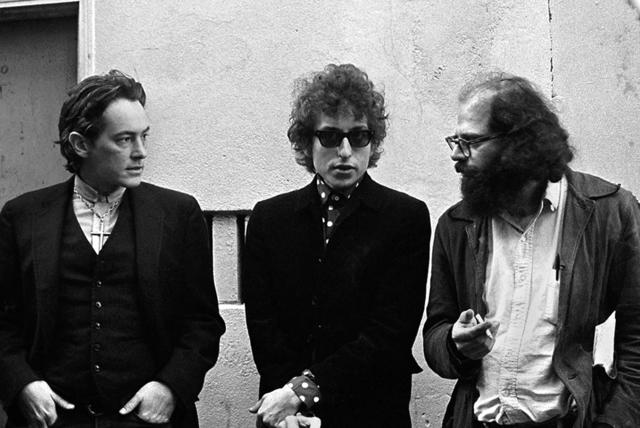 Michael McClure, left, with Bob Dylan and Allen Ginsberg in San Francisco in 1965.

"Without the roar of McClure, there would have been no '60s."
— Actor Dennis Hopper

Michael McClure, a poet who helped usher in the Beat movement, died at his home in Oakland. He was 87. McClure was part of the storied poetry reading at the Six Gallery in San Francisco on Oct. 7, 1955, when Allen Ginsberg premiered an early version of his poem "Howl." The event has been called among the most important in American literature. S.F. Chronicle | N.Y. Times 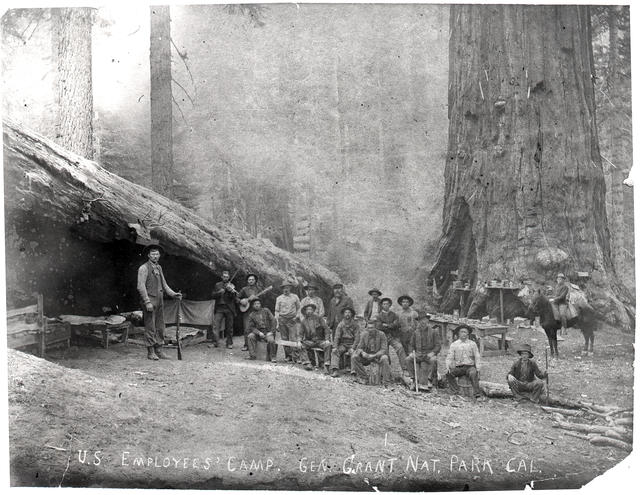 An undated photo of the Fallen Monarch in King Canyon National Park. Early visitors used it as shelter.

The mind-boggling height and longevity of California's redwoods are credited in part to sprawling root systems, which extend outward as much as 150 feet and interlock with the roots of other trees. Still, they do occasionally fall.

In soggy winters, a coast redwood might come thundering down as often as once per week in Muir Woods, crew members have said.

In the old days, fallen redwoods sometimes provided shelter for humans and horses. The cattleman Hale Tharp spent his summers in a hollowed giant sequoia log in what is now Sequoia National Park for more than 20 years. Later, they became tourist attractions.

After an era of unbridled clear-cutting, California's remaining old-growth forests are now broadly regarded as sacred. Yet when trees fall on their own, conservationists don't mourn. It's "actually something to celebrate," Mia Monroe, an interpreter at Muir Woods, told the Parks Conservancy.

The enormous logs may be carved away if blocking a trail, but they are otherwise left to endure as factories of life — opening up shafts of sunlight, fertilizing the forest, and creating new homes for animals. "They don't really die," Monroe said. "That's why I call it the circle of life — because they're just taking a new position in life."

Below, a photo tour, including a look at those incredible roots. 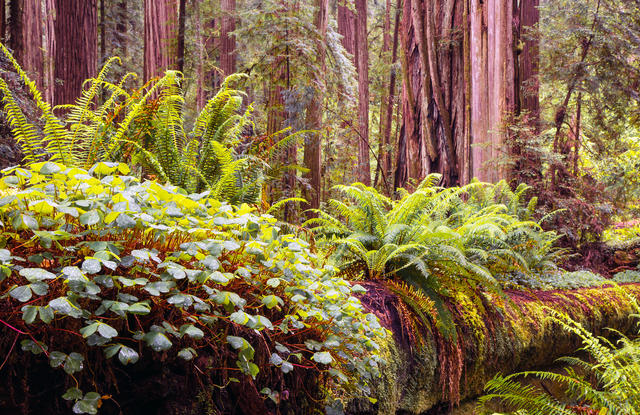 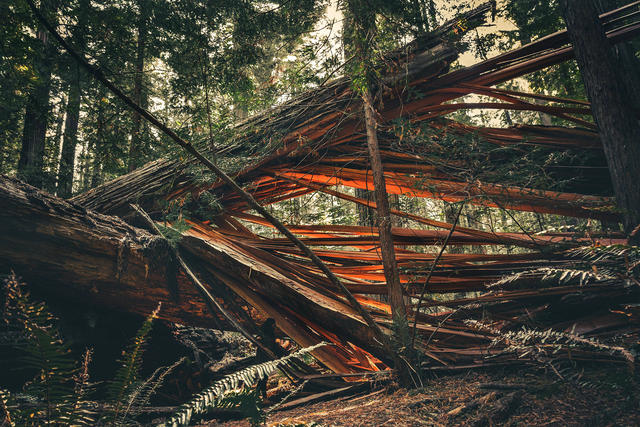 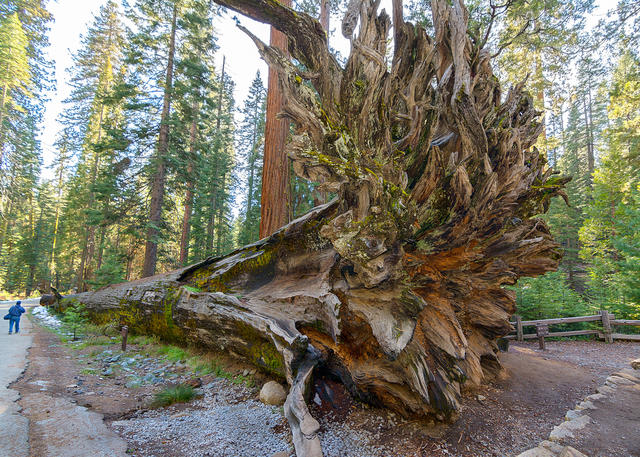 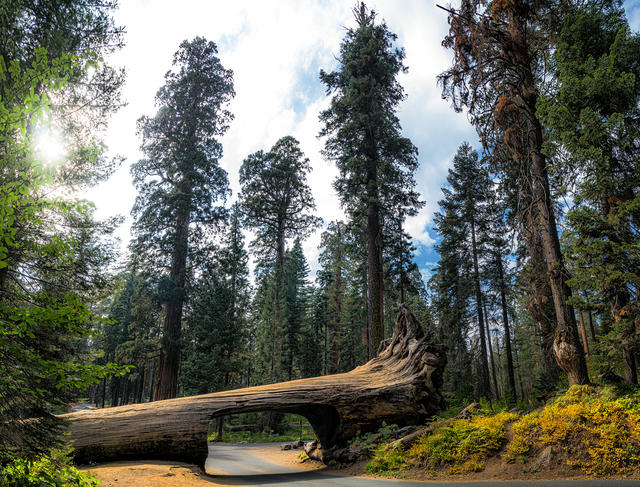 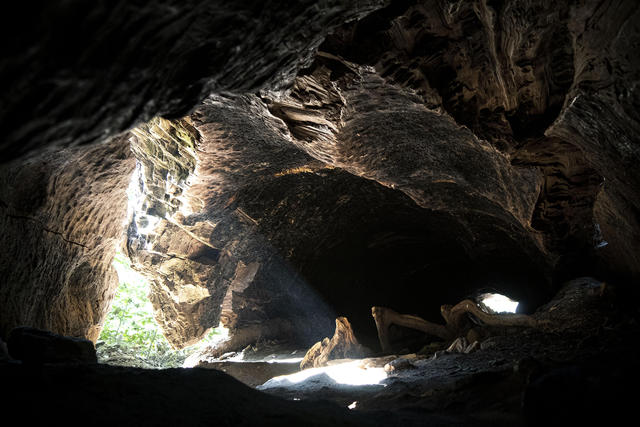 Inside a fallen giant sequoia in Yosemite.