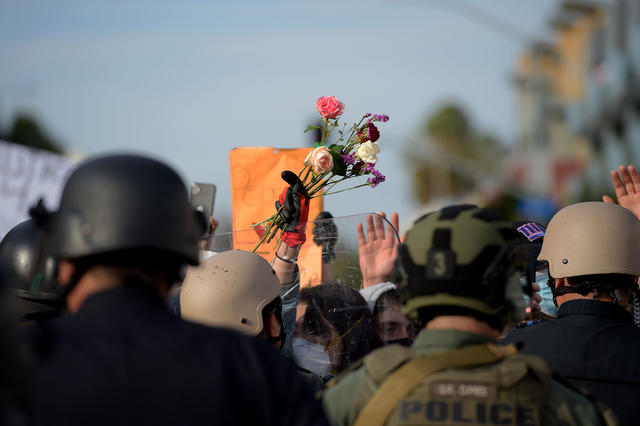 A protester held up flowers while protesting in Santa Monica on Sunday.

Protests over the death of George Floyd raged in cities across California over the weekend, most dramatically in Los Angeles, where the National Guard was called in. While the demonstrations began peacefully, many exploded into violence, vandalism, and looting. Curfews were imposed in San Diego County, L.A. County, and seven Bay Area cities, among other places. A.P. | L.A. Times 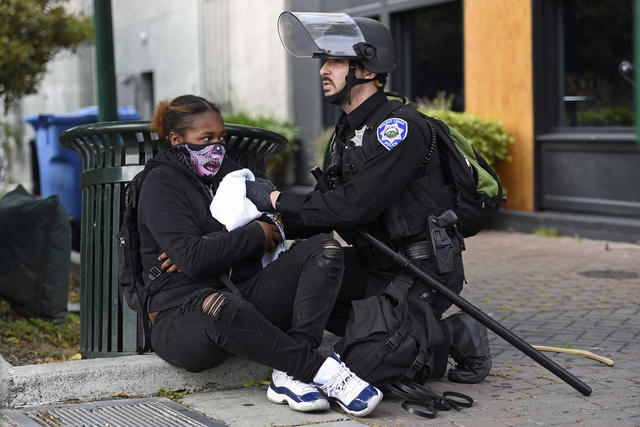 A Walnut Creek police officer helped a woman who was shot on Sunday.

Among the outbursts of violence: 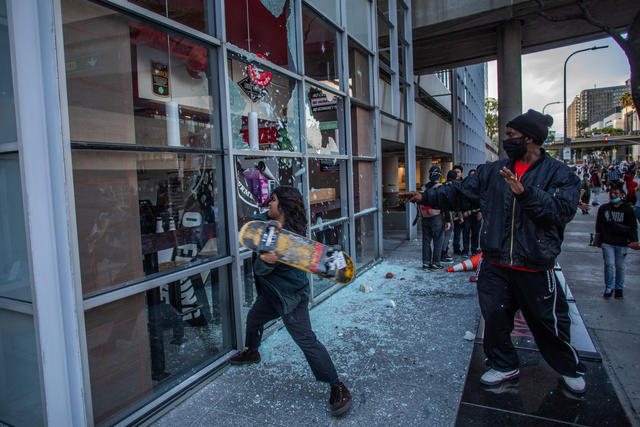 Someone vandalized a restaurant in downtown Los Angeles on Saturday.

Los Angeles saw some of the nation's most raucous clashes on Saturday, as dozens of shops were vandalized and nearly 400 people were arrested. By Sunday, military humvees full of National Guard troops had fanned out across the city after being summoned by Mayor Eric Garcetti. “It breaks my heart, too, to think about the Angelenos protesting in peace and fighting for justice how this violence and looting clouds that picture,” he said. L.A. Times | LAist | L.A. Daily News

Here's a crazy video of the chaos in L.A.'s Fairfax District on Saturday. Twitter (38 secs) 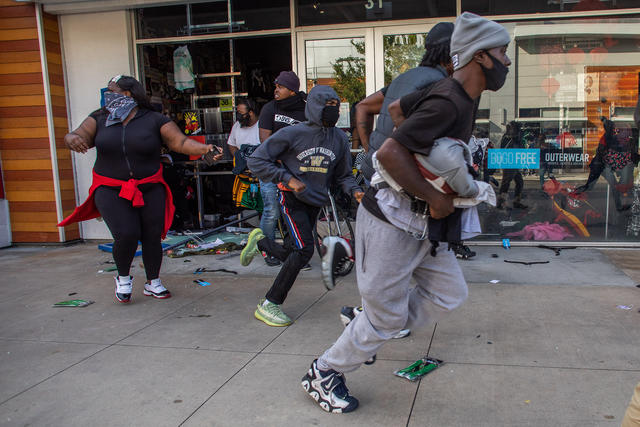 People ran with items looted from a clothing store in Long Beach on Sunday.

Fresh rounds of looting broke out on Sunday in Long Beach and Santa Monica, prompting both cities to call in the National Guard.

In San Diego County, the community of La Mesa saw intense rioting Saturday night that transformed the downtown into something resembling a combat zone. Businesses big and small were attacked and looted. Several cars and a Chase Bank branch were set on fire. Police responded with flash bangs and tear gas. KPBS | S.D. Union-Tribune

In San Diego, hundreds of protesters on Sunday blocked the I-5 in both directions. S.D. Union-Tribune | Times of San Diego

In many cases, business owners were dismayed to be targeted even as they felt common cause with the protesters. The owner of a vandalized eyeglasses shop in Sacramento choked back tears: “I know why people are upset. Just taking it to this level, it’s just a little bit much." Sacramento Bee

"We only want to be treated like people." A young protester explained why she believed the destruction is necessary. YouTube/ABC7 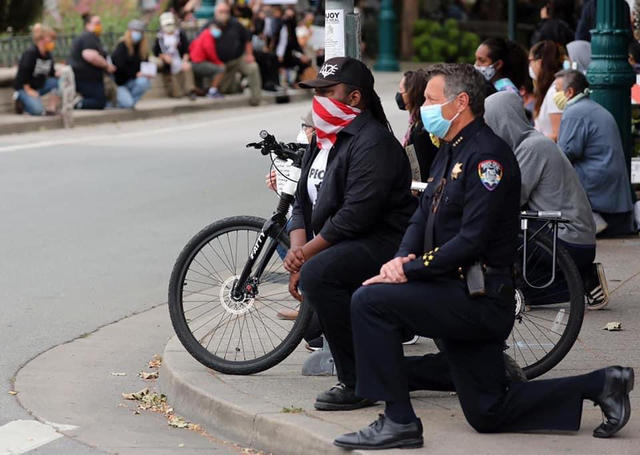 Even as tense confrontations unfolded between cops and protesters, a number of law enforcement leaders across California spoke out, marched, and even knelt in solidarity with the protesters. A few examples:

"It’s part of our faith to be together."

Many churches across California reopened for the first time in months on Sunday. Under state guidelines houses of worship can host congregations as long as they limit their size, a restriction upheld Friday by the U.S. Supreme Court. Even so, a church in Fresno defied the order, allowing as many as 350 people to gather. Fresno Bee | YourCentralValley 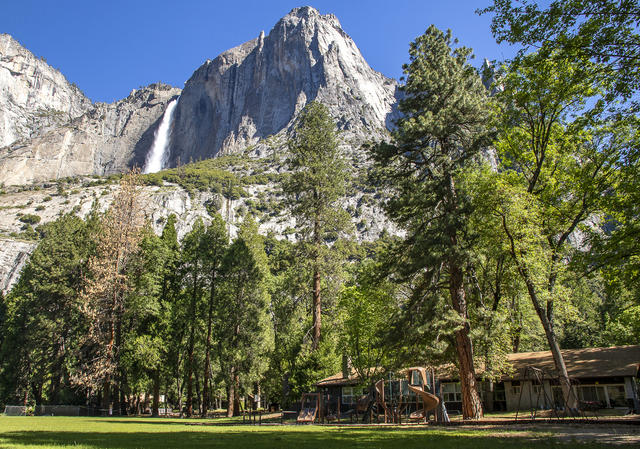 Along with the bears and bobcats, another sort of creature has had Yosemite all to themselves for the past three months: The children of Yosemite Valley School. The only school inside the park has three classrooms and 35 students in K-8th grades. "Their school is tucked in a meadow overlooking Yosemite Falls, the tallest waterfall in America and a fine sight to see while playing kickball." A.P.

Many small businesses in Los Angeles refused to close after the county's mid-March “Safer at Home“ order. To avoid detection they've kept the lights off, told prospective clients to use back doors, and allowed just one client on-site at a time. "This is what the new Prohibition looks like." Politico Magazine 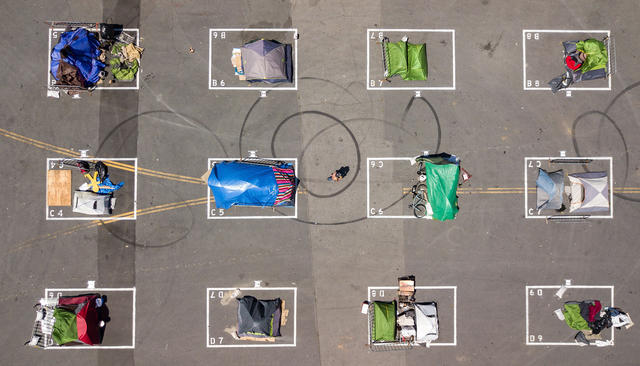 Homeless tents at a sanctioned camp across from City Hall in San Francisco on May 22.

The New Yorker published a searing account of homelessness in San Francisco: "Homelessness is where the most acute American nightmares of this era meet, and San Francisco has a way of making what is hidden elsewhere visible. Ever since the recent tech boom turned life in the city upside down, all the paraphernalia of American society — the wads of cash, the access keys, the drugs, the nubs of ideology — has been spilling out of San Francisco’s pockets, into an enormous pile on the street." New Yorker

One study of foster youth found that nearly a third become homeless by their early 20s. That's one reason that Santa Clara County this month will become the nation's first county to provide basic income to young people transitioning out of foster care. The taxpayer-funded pilot program will give $1,000 a month for a year to 72 young adults — no strings attached. "This job of parenting doesn’t end at 18 years old," a county supervisor said. Fast Company | Chronicle of Social Change