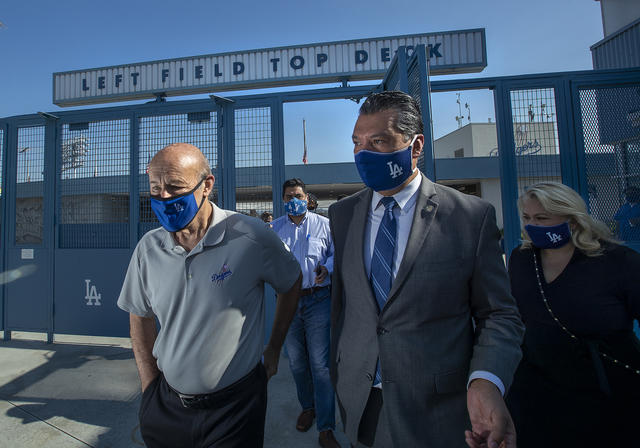 The California Republican Party acknowledged that it placed more than 50 ballot boxes — some deceptively labeled "official" — at churches, gas stations, and gun stores around the state. State officials declared them illegal and threatened criminal prosecution. But Republican leaders were defiant, arguing that the boxes were permissible as a form of ballot harvesting, the legal practice of collecting mail-in ballots from voters and dropping them off at polling places. “Democrats only seem to object to ballot harvesting when someone else does it," the state's G.O.P. spokesman said. A.P. | L.A. Times | S.F. Chronicle

California’s coronavirus positivity rate — 2.6% as of Saturday — is lower than ever, and its number of hospitalizations — 2,209 — is the lowest in more than six months. Still, health officials are worried about a rebound during the holiday season. So they issued new guidelines: Outdoor gatherings of up to three households are fine. Indoor gatherings remain strongly discouraged. L.A. Times | Mercury News

A dose of optimism: Experts say the pandemic in the United States will be over far sooner than they expected, possibly by the middle of next year. N.Y. Times 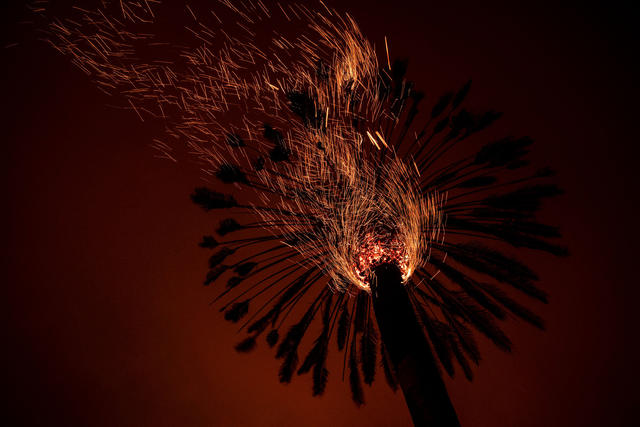 Sparks flew off a tree in Napa County last month.

Four out of the six Nobel Prize categories were awarded to people connected to California. They were either born in California, were trained in California, or teach at California universities. The latest winners, Paul Milgrom and Robert Wilson, both of Stanford University, clinched the economics prize for discoveries that have made auctions run more efficiently. A.P. | N.Y. Times

See all of the laureates, including California winners in physics, chemistry, medicine, and economics. 👉 NobelPrize.org 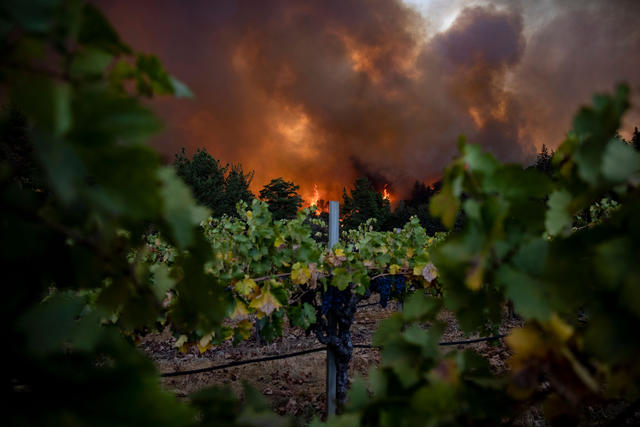 The Glass Fire burned near vineyards in Napa Valley on Sept. 27.

California's earlier fire season means that it increasingly coincides with the grape harvest season, not only burning vines but enveloping them in smoke. By one estimate, it may prevent as much as 80% of Napa Valley’s 2020 Cabernet Sauvignon grapes from being made into wine. It's raised a real doubt about whether the industry can survive. National Geographic

Forecasters said midweek would once again bring broiling heat across the state. Powerful winds were expected across the Bay Area late Wednesday through early Thursday, threatening new outbreaks of fire. PG&E said it may cut power to 50,000 homes and businesses in Northern California, nearly half of them in the Bay Area. S.F. Chronicle | Mercury News

Mark Zuckerberg once cited Holocaust denial as the sort of thing that Facebook would allow on its platform because “there are things that different people get wrong.” Now he's changed his mind. Explaining a new policy banning any content that "denies or distorts the Holocaust," Zuckerberg cited a recent survey in which nearly a quarter of American adults aged 18-39 said the Holocaust was a myth, had been exaggerated, or they weren't sure. Washington Post | NPR 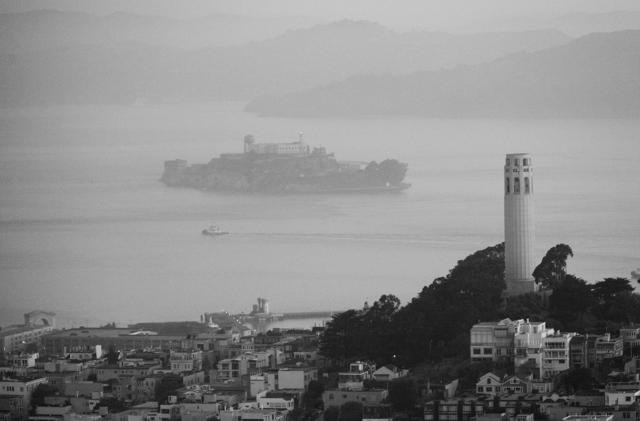 It's sometimes claimed that San Francisco's Coit Tower was designed to look like a firehose.

Built in the early 1930s, the Art Deco structure was added atop Telegraph Hill as a tribute to firefighters at a time when memories of the 1906 earthquake and fires were still fresh. It quickly became one of San Francisco's most recognizable symbols. But the firehose story, alas, is untrue. It was just designed to be pretty.

Here are 85 fascinating facts about the landmark. 👉 Curbed San Francisco

And a couple more views 👇 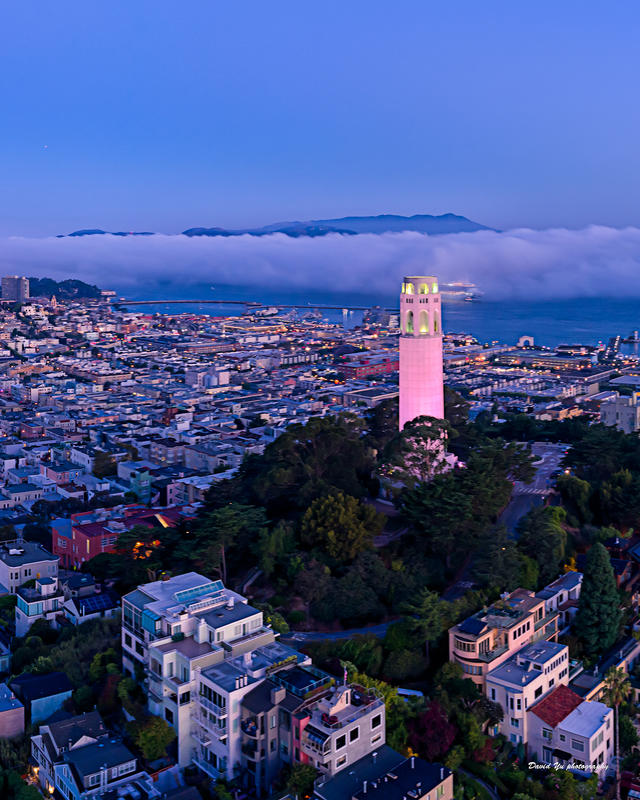 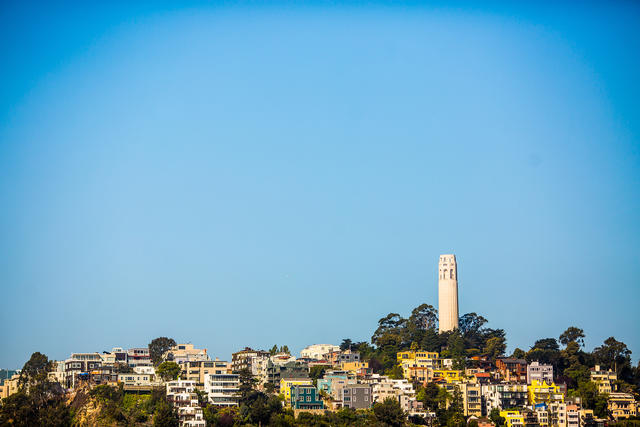 Kristal, as she is known to neighbors, has been deteriorating before everyone's eyes. She lives on the streets of Silver Lake in Los Angeles, barefoot, caked in dirt, and perhaps pregnant. But she adamantly refuses help. Her case is an example of how hard solving homelessness can be. But humanity demands we try, wrote the columnist Steve Lopez. "You cannot allow Kristal’s level of deterioration, suffering, and indignity to become acceptable." L.A. Times

There's a surf park boom in the dusty Coachella Valley, 100 miles from the ocean. Four are currently under development. A reporter got a tour of the state-of-the-art wave machine at the planned Palm Springs Surf Club. It's the vision of an inventor named Tom Lochtefeld, who sold his business and his home to finance an obsession with bringing perfect waves to the masses. N.Y. Times

A look at pros testing out the waves. 👉 YouTube

Gif created from video by KABC.

☝️ People have been summoning the fire department to this Riverside home, whose fire-themed Halloween decor is maybe a little too realistic. The homeowners, Carmen and Travis Long, started with skeletons. Then they got a little carried away. KABC 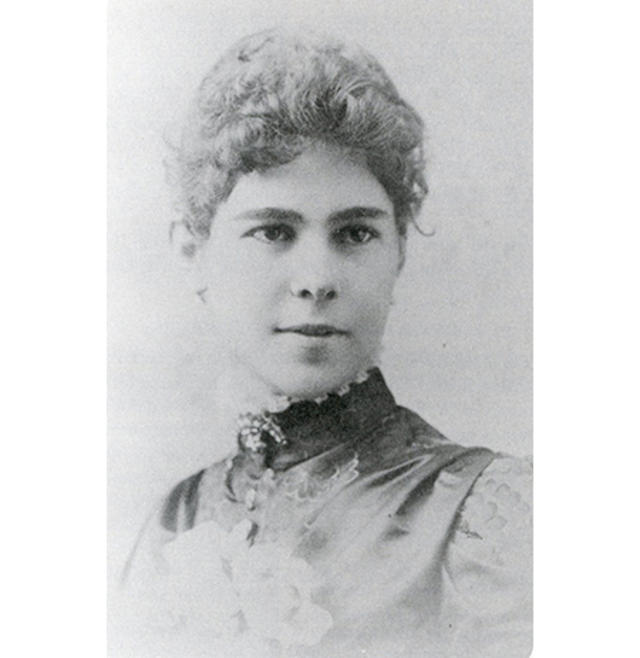 There are many pictures of Griffith J. Griffith, the benefactor of Griffith Park and Observatory. But few images exist of his wife, a daughter of aristocracy named Mary Agnes Christina Mesmer, from whom much of Griffith's wealth and prestige sprang. That's in large measure because Griffith was a violent alcoholic who permanently disfigured her face.

One summer afternoon in 1903, Griffith ordered his wife to kneel and swear that she had been faithful to him. “Darling, you know I have,” she replied. She begged for her life. Unmoved, he shot her through the left eye. Griffith went to jail for 20 months, and later died of liver disease. Mary Agnes Christina Mesmer spent the rest of her life in seclusion, hiding her face behind a veil.

Pictured above is one of the only photos of her, captured before she was shot. Some historians think she ought to be a more recognizable figure of Los Angeles's story. KCET