Note: The newsletter will pause through next week. Please enjoy your holiday and I'll be back in your inbox on Jan. 4. 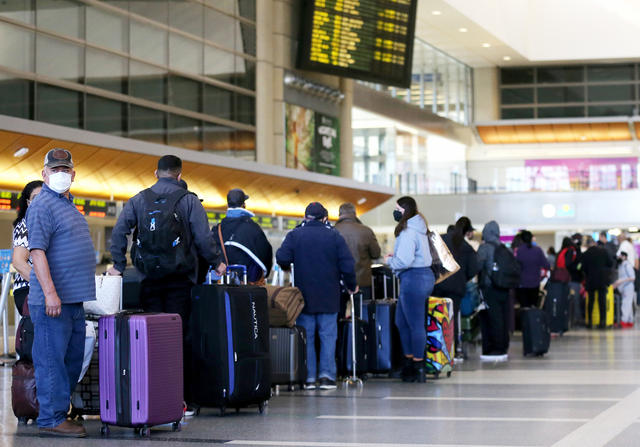 Travelers lined up at Los Angeles International Airport on Tuesday.

In October, fewer than 150 Covid-19 patients were being admitted daily to L.A. County hospitals. In November, it was 300. Now it's 700. By New Year's Eve, if trends continue, it could be 1,400. “Are you invited to a party?" an epidemiologist said. "Just say no. Are you invited to friends for dinner at their house? Just say no. That way, when you need an ICU bed, the hospital won’t be telling you, ‘No.’” L.A. Times

The New Yorker on the San Joaquin Valley, where the coronavirus is raging out of control: "Add a global pandemic to the valley’s preexisting economic disparities and political frictions, and you get what’s unfolding now. You get sheriffs announcing that they won’t enforce state measures designed to mitigate the spread of the virus. ... You get barefaced protesters who demand that their town be declared 'a sanctuary city for businesses.'"

Merlin Pambuan, a veteran ICU nurse in Long Beach, caught the coronavirus last spring. She was placed on a ventilator and fed through a tube. On several occasions she came close to death, doctors said. End-of-life options were discussed with her family. On Monday, eight months after her ordeal began, Pambuan walked out of the hospital, drawing cheers. “This is my second life,” she said. Reuters 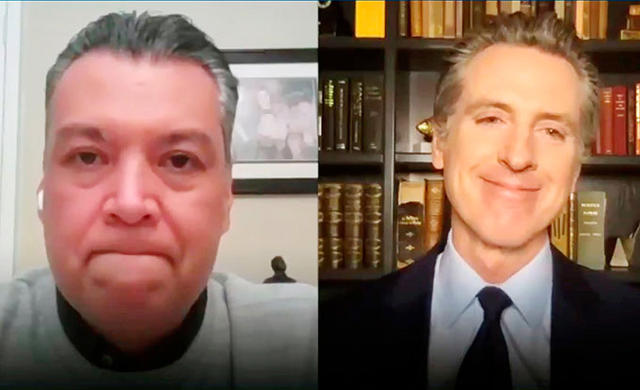 "I can't tell you how many pancakes my dad flipped or eggs he scrambled trying to provide for us."

California Secretary of State Alex Padilla, 47, recalled the sacrifices of his Mexican immigrant parents on Tuesday after Gov. Gavin Newsom formally asked him to fill the Senate seat held by Vice President-elect Kamala Harris. Padilla will now become the first Latino ever sent to the Senate from California, a state where Latinos make up 40% of the population. S.F. Chronicle | Politico

Don't miss the emotional video of the moment Padilla got the news. 👉 @GavinNewsom

A son of Pacoima. An MIT-trained engineer. L.A.'s youngest council member at age 26. Here are a couple quick primers on California's next senator. 👉 CalMatters | L.A. Times

Not everyone was pleased by the choice of Padilla. San Francisco Mayor London Breed said she was shocked by the news that Newsom had not picked a Black woman to replace Harris. "This is a real blow to the African American community, to African American women, to women in general," she said. "I think it’s really challenging to put it in words." SFGate.com | A.P. 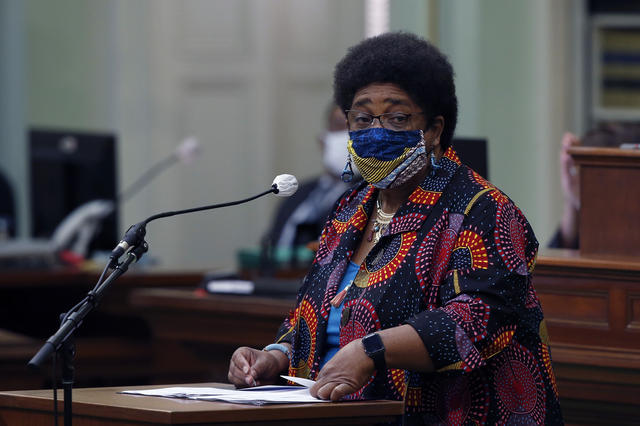 Assemblywoman Shirley Weber, of San Diego, spoke during a legislative session in Sacramento in June.

Hours after appointing Padilla, Newsom tapped the departing secretary of state's replacement, Assemblywoman Shirley Weber. The daughter of an Arkansas sharecropper, she will be the first Black person to hold the office in California's history. As a legislator, Weber has been an advocate for civil rights and police reform, writing the nation’s strongest police use-of-force law and championing a first-in-the-nation bill to study reparations. CalMatters | Sacramento Bee

A NASA research facility in Mountain View killed 27 monkeys in a single day in 2019, according to documents obtained by the Guardian. The animals were aging and retired from research purposes. The decision to kill them rather than move them to a sanctuary has enraged animal activists. A New York congresswoman demanded an explanation. The Guardian 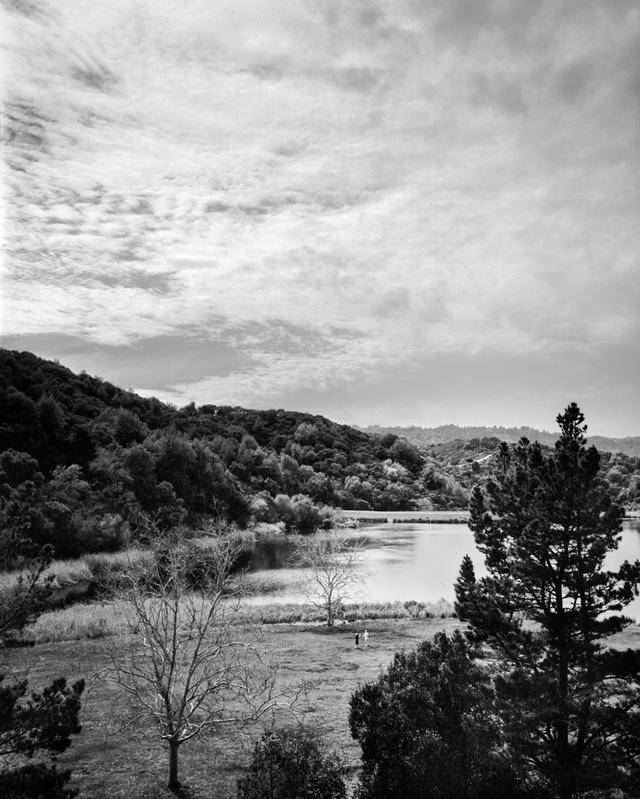 Boronda Lake is used for fishing, paddleboarding, and canoeing in Foothills Park.

The public owns 1,400-acre Foothills Park in Palo Alto, yet the city barred access for nonresidents since the 1960s. It took a yearslong legal fight to overturn the policy, and last Thursday the park was finally opened to all. A reporter went and hiked the entire thing over the weekend. It made him furious. "It is majestic," he wrote. SFGate.com 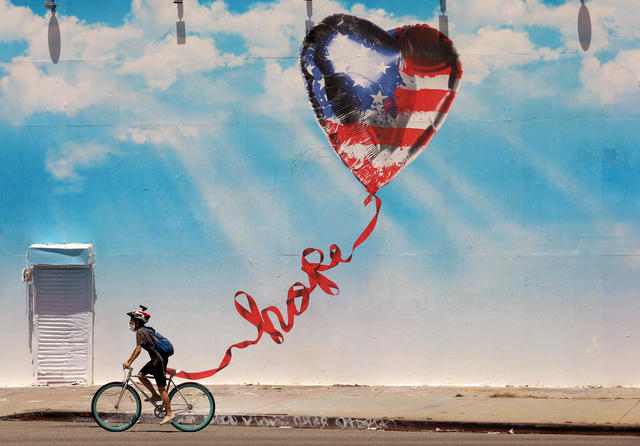 A cyclist rode past a mural in Los Angeles on June 15.

It started with the loss of a legend, when Kobe Bryant's helicopter went down on Jan. 26. Then came a pandemic, a summer of racial unrest, and several of the largest wildfires in California history. 2020 has been a year not to be soon forgotten.

The L.A. Times and S.F. Chronicle both published collections of the most memorable images of the year. 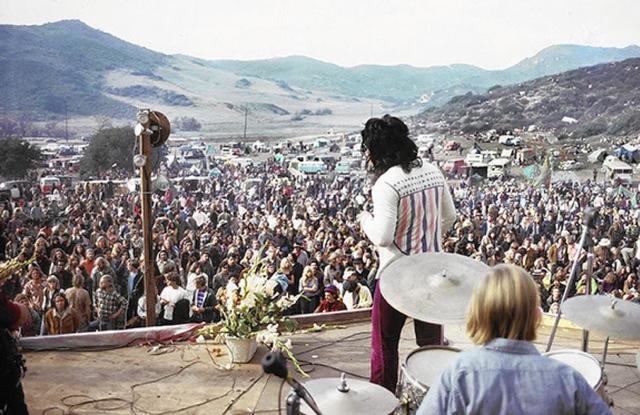 A view from the stage at the "Christmas Happening" in Laguna Canyon in 1970.

Laguna Beach began the 1960s as a sleepy arts colony. As the hippie counterculture arose, the city’s gorgeous setting and dirt-cheap beach living made it a natural hub for the movement. Hare Krishnas moved into town. Gay people found sanctuary. Art and drugs abounded.

Then, 50 years ago on Christmas Day, the city hosted what was billed as Southern California’s answer to Woodstock.

Originally planned for the beach, the "Christmas Happening" was moved to a canyon just beyond the edge of town after officials grew alarmed by the potential for chaos. “Be a witness to the birth of the New Age,” a poster read. Rumors spread that Jimi Hendrix and The Grateful Dead would show. (They didn’t). 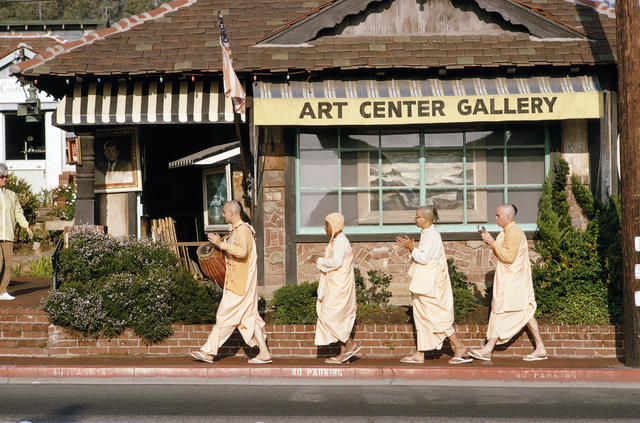 A Hare Krishna procession walked by a gallery in Laguna Beach in January 1970.

Roughly 25,000 flower children arrived from as far as Kansas and Illinois, setting up camp in Laguna Canyon. The food, the music, and the love were all free. At one point an evangelical drug-dispensing group, "Brotherhood of Eternal Love," flew a plane overhead and dropped hundreds of Christmas cards affixed with LSD tabs in the only documented psychedelic airdrop in history.

With cold weather and dwindling food, people began to disperse by Day Two. But about 1,500 others stayed, apparently envisioning the canyon as a new living space.

After three days, city officials had had enough. More than 400 police officers swept in, forced the lingerers onto buses, and used bulldozers to bury everything left behind. Nearby homeowners cheered.

The event, alas, failed to usher in world peace. But to many participants, it was the greatest Christmas of their lives. Soon after, the City Council enacted a 2,500-person limit on single-group gatherings, ensuring no more “happenings” would ever happen again. Yet the spirit of those days still echoes in Laguna Beach, a place that has remained a haven for the arts — just without the affordable living.

See some great photos of Laguna Beach in the 1960s. 👉 KCET