Deportation fears are disrupting the lives of California's farmworkers. One example, writes CALmatters, can be seen in Santa Cruz County, where a clandestine food bank brings supplies to people who are so worried about immigration enforcement that they avoid official food banks and even grocery stores. CALmatters

Some of the nation's most pressing issues — climate change, immigration, labor shortages — are playing out on California's farms. Miriam Pawel wrote about how a quintessential Central Valley farm is adapting. N.Y. Times 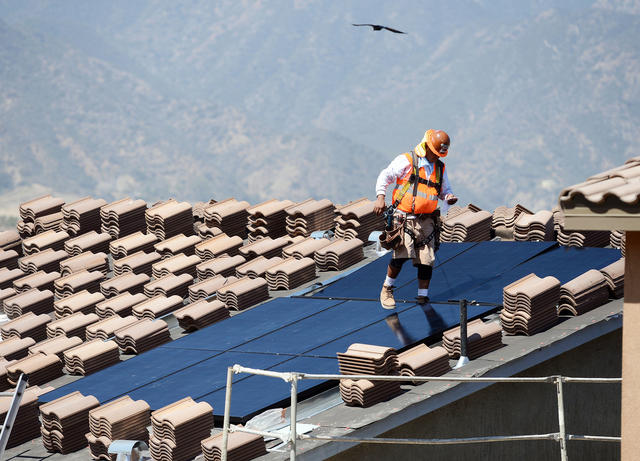 Workers installed solar panels on the roofs of homes in Corona last year.

Clean energy jobs in California now outnumber jobs in the fossil fuel industry by 5 to 1, a study found. Four in 10 American solar jobs are now in California. A Stanford professor noted that the classification of clean energy jobs includes installers of energy-efficient heating and air conditioning systems. So many aren't new, he said. "It's relabeling existing jobs." Mercury News

The dialysis industry has spent $2.5 million in the first half of this year in a bid to thwart regulation. The companies have been accused of gaming the health care system for immense profits. Still, the new spending is nothing compared to what the industry spent to kill a 2018 ballot measure that would have capped its profits. That war chest bulged with $111 million. California Healthline 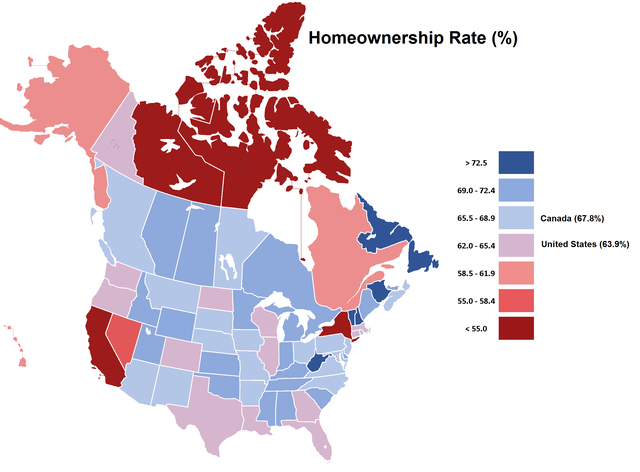 California's homeownership rate is among the lowest in the country. Data cruncher Gerard Walsh shared a map used recent Census data to show how California compares to the rest of North America. Dark red means below 55 percent.

Experts have blamed housing scarcity for driving up home costs, making the market increasingly out of reach to first-time buyers. A 2016 study by McKinsey estimated California needs 3.5 million more homes by 2025 — as much as the other 49 states combined. Mercury News | Curbed Los Angeles (2018)

A "straight pride" group staged a rally in Modesto on Saturday — and found itself far outnumbered by counterprotesters. No more than a few dozen straight pride supporters showed up, carrying signs that included "Lord, Forgive Us and Our Nation." Organizers had predicted several hundred. Modesto Bee | CBS Sacramento

School officials voted to cover “The Life of Washington,” a mural from 1935–36.

The Washington Post did a deep dive on the history behind that San Francisco high school mural at the center of a fierce debate. One historian argued that the school had failed to teach students about the context or symbolism contained in artwork, which depicts George Washington commanding enslaved men. A school board member disagreed, calling the mural as outdated as 1930s textbooks. Washington Post

Board members said they ordered the murals covered to protect students. The S.F. Chronicle asked 17 students for their opinions. Two said the mural should be covered; 10 said it shouldn't, and five didn't care either way. S.F. Chronicle 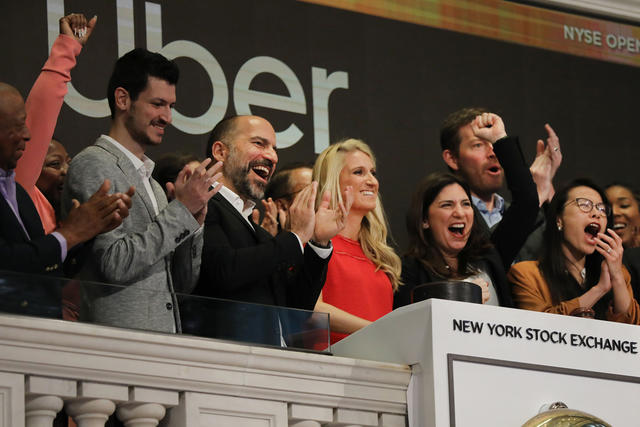 Dara Khosrowshahi, Uber C.E.O., and other employees cheered the ringing of the opening bell at the New York Stock Exchange as the company made for its initial public offering on May 10.

The N.Y. Times published an excerpt from a new book on how Uber lost its way. One morsel: In 2014, the San Francisco company announced a new $1 charge on fares called a "safe rides fee." Uber said it was needed for background checks. Turns out it was just a play for pure profit — bringing in nearly half a billion dollars. It was never allocated to improving safety. N.Y. Times

Google issued new workplace guidelines that crack down on employee discussions of politics and other topics not related to work. It's a significant about-face for a company that has prized its freewheeling internal culture but has been stung by recent controversies, including accusations that a worker was fired for his conservative viewpoints. While sharing ideas helps build community, the guidelines read, "disrupting the workday to have a raging debate over politics or the latest news story does not." N.Y. Times | recode 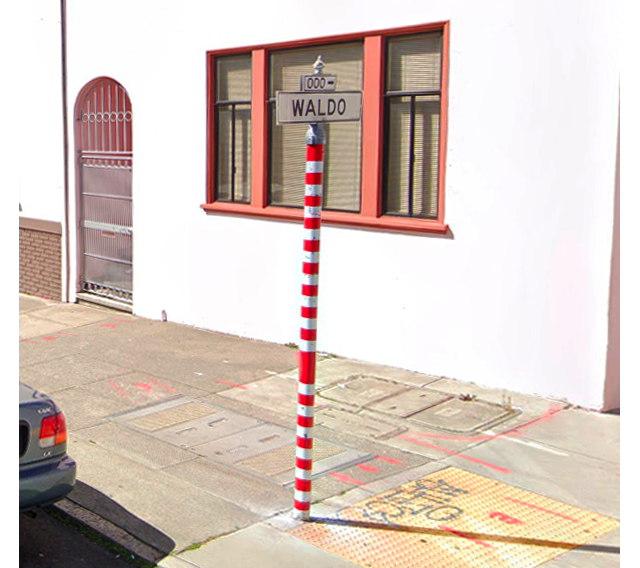 "There was no sniper, no shots fired, and no gunshot injury sustained to his shoulder — completely fabricated."

In a stunning announcement, the Los Angeles County Sheriff department said a deputy falsely claimed that he was shot by a sniper last week. Angel Reinosa, 21, will now be the subject of a criminal investigation, officials said. They know the what and the how, Sheriff Alex Villanueva said. "We don't know the why." L.A. Times | A.P. 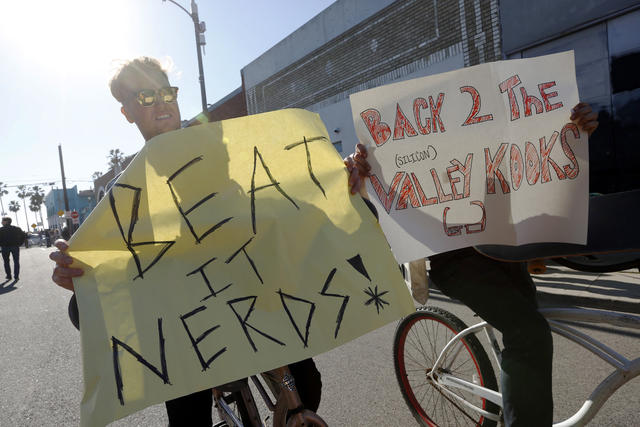 Venice residents protested in front of the Snapchat offices in Venice in 2017.

Many people felt Snapchat had no business coming to the counterculture mecca of Venice. Now that it's left, "For Lease" signs dangle from the rooflines along Market Street, and locals are wondering what comes next. "I walked down there the other night, it's like 'Mad-Max Thunderdome,'" a former neighborhood council member said. "I think a lot of companies saw how Snapchat was treated by the protesters, and they don't want to see the same thing." N.Y. Times 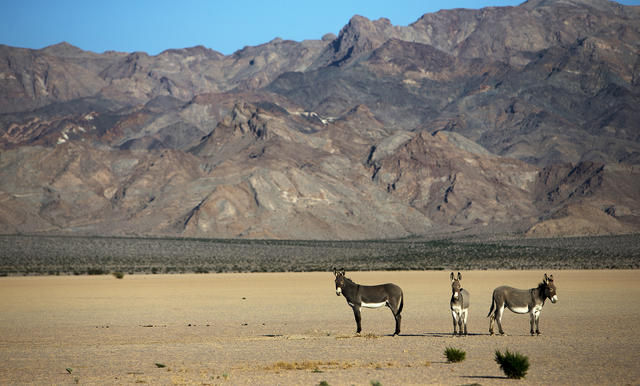 Wild burros hung out in the Mojave Desert.

Someone has been killing the wild burros of the Mojave Desert, and the Bureau of Land Management is offering up to $18,000 to anyone who can help catch the culprit. Over the last three months, 42 burro carcasses with gunshot wounds have been found along a stretch of Interstate 15, linking Los Angeles to Las Vegas. A.P. | L.A. Times 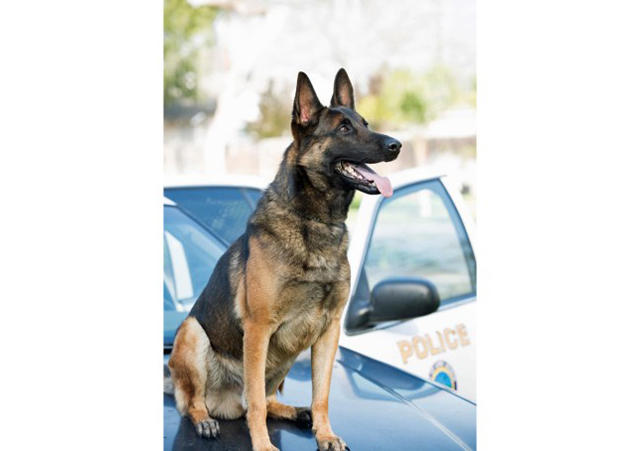 Ozzy died after being left in a hot vehicle.

A Long Beach police dog was found dead inside his handler's department vehicle. An examination determined the cause to be heat-related. The Long Beach Police Department said the loss of Ozzy, age 6, appeared to result from an accident. "This unfortunate incident was not intentional," it said in a statement. Press-Telegram | CNN 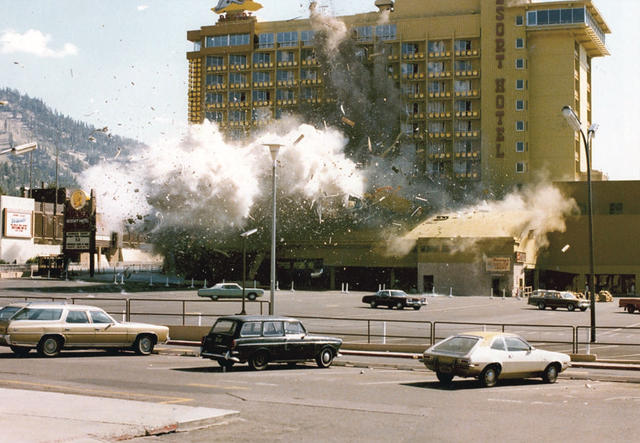 In 1980, a mad genius went broke gambling, then blew up the casino with a half-ton bomb in an extortion attempt.

It was on this day 39 years ago that workers at Harvey's Wagon Wheel Casino on the edge of Lake Tahoe discovered a strange machine on the second floor. F.B.I. experts later described it as among the largest and most sophisticated homemade bombs they'd ever seen.

The device had been disguised as computer equipment and wheeled into the casino undetected. An accompanying letter demanded that a money drop be delivered in the mountains by helicopter: $3 million in used $100 bills. 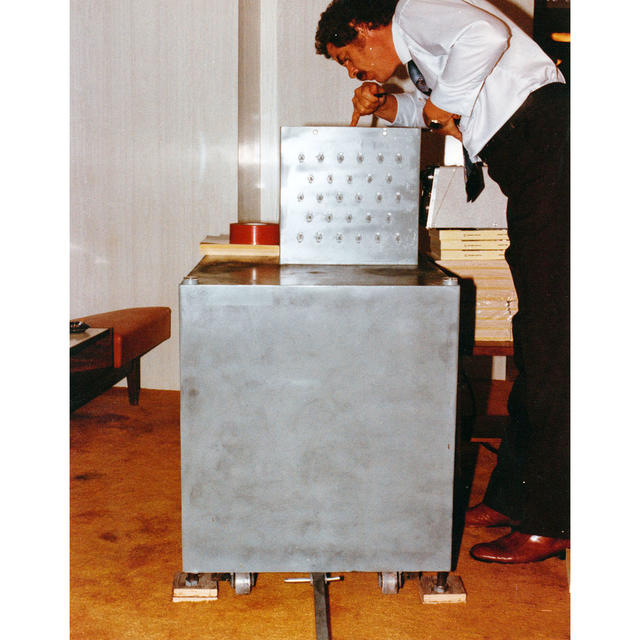 John Birges was a Hungarian political refugee in a Fresno suburb who embodied the American dream. He worked hard, saved $500 to start a landscaping company, and grew into a millionaire.

He was also a gambler, flying regularly to Lake Tahoe in his personal plane. Before long, his life fell apart. He was 58, terminally ill, twice divorced, and broke. Then the Harvey's debt collector started coming around.

With help from his two young adult sons, Birges stole dynamite from a construction project and spent months building an elaborate bomb that he covered with toggle switches and leveling bubbles. Jostle it, Birges wrote in his letter, and it will explode. In exchange for the ransom, he would give instructions on how to move it safely.

The F.B.I. wasn't biting. The next day, on Aug. 27, 1980, they attempted to disarm the bomb with a small explosive inside the empty casino. It failed. The building heaved with a giant blast that blew out the second and third floors. A crowd of spectators, some them already wearing "I Was Bombed at Harvey's" T-shirts, erupted in cheers. 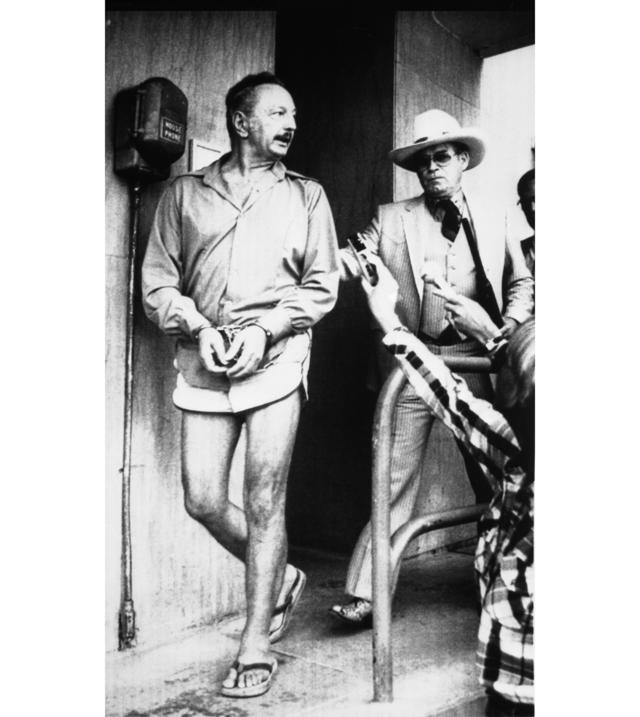 The ransom handoff, meanwhile, was thwarted by misread directions. The money bags were filled with scrap paper anyway. Birges and his sons went home empty-handed.

A year later, a host of clues brought investigators to Fresno, and the Birges boys flipped on their father. Sentenced to life without parole, Birges never really came clean. He admitted building the bomb — of that he was proud — but said he was put up to it by a mysterious hood named Charlie. Birges died in prison in 1996 at age 74.

The legend of his bomb, however, lived on. The F.B.I. used a replica as a training device for decades. Atavist Magazine | damninteresting.com