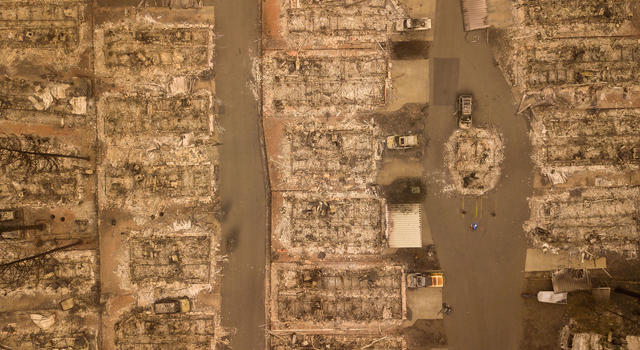 A deadline for wildfire damage claims against PG&E is three weeks away and as many as 70,000 Californians from Paradise and other devastated places may be left out. Many are unaware, overwhelmed, or misinformed. Some mistakenly think their claim might take away money from those needing it more. N.Y. Times

A mystery surcharge on gas is costing California families an estimated $1,800 a year — and no one seems to know why. Enough is enough, wrote the editorial board of the Mercury News: "They deserve to know whether that money — roughly $4 billion a year — is going to further enrich oil companies at the expense of consumers." Mercury News 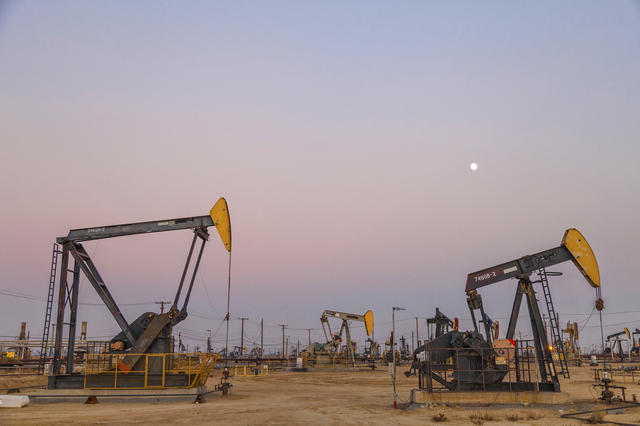 Oil derricks, like theses in Kern County, could spread to more of California.

Citizens of the Planet/Universal Images Group via Getty Images

The Trump administration finalized plans to open up more than 1,100 square miles of federal land in central California to oil and gas leasing. Supporters said the decision promotes energy independence. An environmental lawyer said, "This reckless move is the toxic convergence of Trump's climate denial, loyalty to the oil industry and grudge against California." The Hill | Sacramento Bee

Climate change, bark beetles, and intense wildfires. Conservationists are struggling to save the Sierra's giant sequoias. The Guardian

In California, Trump lost the vote 2 to 1 in 2016, and he's been hammered by a drumbeat of lawsuits from Attorney General Xavier Becerra. Now, the N.Y. Times editorial board wrote, the president is making a weapon out of the EPA "Never, so far as we can recall, has it been so obviously deployed as an instrument of political retribution." N.Y. Times 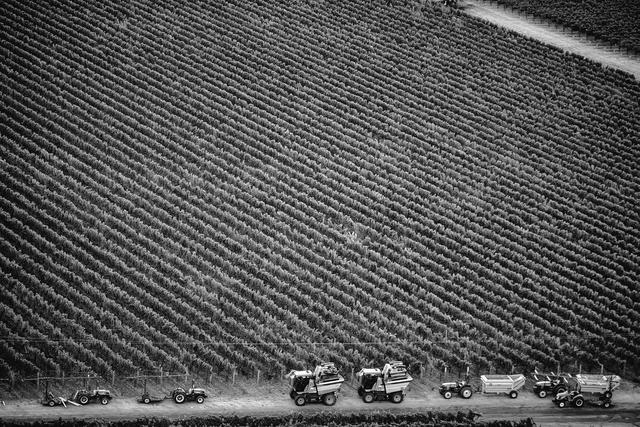 An oversupply of grapes and slowing wine sales have spelled troubled for vineyards.

California's 2018 wine grape harvest was the highest-yielding in decades. But now the wine industry is facing a major oversupply problem, and some farmers say it could drive them out of business. A Monterey County farmer said as much as two thirds of his crop may go unsold. "It's as bad a market as we've ever seen," he said. S.F. Chronicle 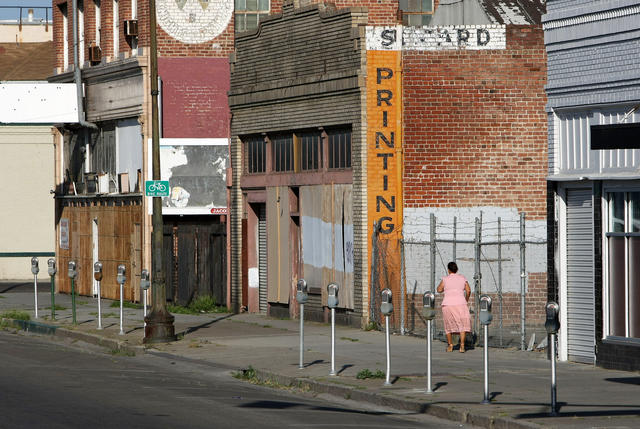 Stockton was once known as America's foreclosure capital.

In Stockton, 125 residents have been getting $500 a month in a test of guaranteed income. Critics worried the money would be spent on things like alcohol and gambling. Researchers have now released data on how the money has been spent, and most of it went to food, clothing, and utility bills. "There are people who are working hard who are struggling," Stockton's mayor said, "not because they're lazy, but because wages haven't kept up with inflation, wages haven't kept up with costs." CityLab | A.P.

Prosecutors haven't given up on holding Derrick Almena accountable in the deadly 2016 Ghost Ship blaze. Almena, who was the manager of the Oakland warehouse where 36 people died, avoided conviction last month after a jury deadlocked. A new trial is now scheduled for the spring. "We want to go to trial," Almena's attorney said. "He will sit and he will wait, and he will be prepared. And at the next trial, we will prevail." East Bay Times | NPR 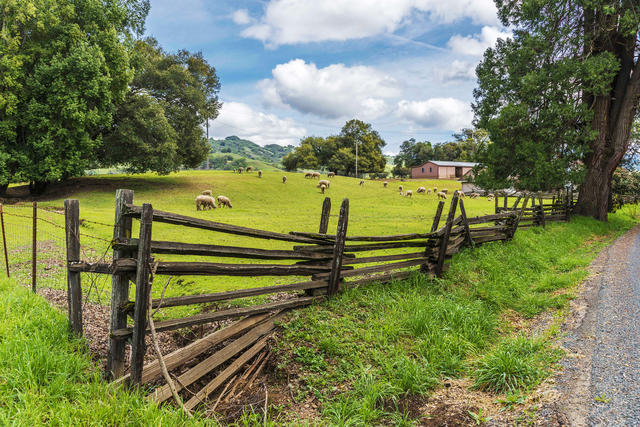 Boonville is a remote hamlet in the fertile Anderson Valley.

Architectural Digest named the country's 50 most beautiful small towns, and included Carmel, Mendocino, and Boonville, where "the town's bucolic-meets-boho-chic vibe extends to the Boonville Hotel and Pennyroyal Farm, a creamery that also makes wine." Architectural Digest

"Dying days of harpin Boont." Boonville is home to a whimsical dialect created by 19th century farmers that is now fading away. California Sun 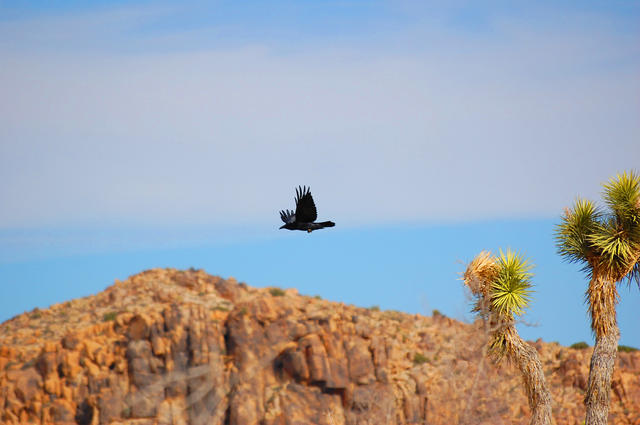 Birds in the Mojave Desert no longer have enough water to stay cool.

Bird populations have collapsed in the Mojave Desert over the last century. Researchers now say they know why: The animals can't cope with the heat stress from climate change in the desert, where average temperatures have risen about 2 degrees Celsius. "Simply put," an ecologist said, "what we've found is that birds don't have enough water to keep themselves cool anymore." L.A. Times | KQED 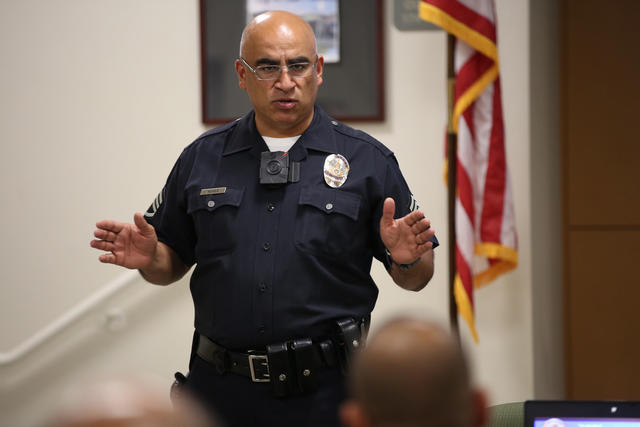 Sgt. Roger Nunez briefed Los Angeles officers on the use of body cameras on Aug. 31, 2015.

Body-worn cameras in the LAPD have helped to both shed light on misconduct and exonerate officers subjected to false accusations. In 2018, the recordings identified 56 cases of officer misconduct, up from five a year earlier. But another 264 complaints were found to be false or resulted in exoneration, up from 79 a year earlier. "It helps both sides of the camera," Police Chief Michel Moore said. L.A. Times

The Marine Corps has quietly disciplined more than 20 Marines for misconduct at its San Diego boot camp since 2017. Incidents included physical attacks and racism targeting recruits. In one case, a drill instructor used a staple gun on a recruit and ordered another to eat a pine cone. Washington Post 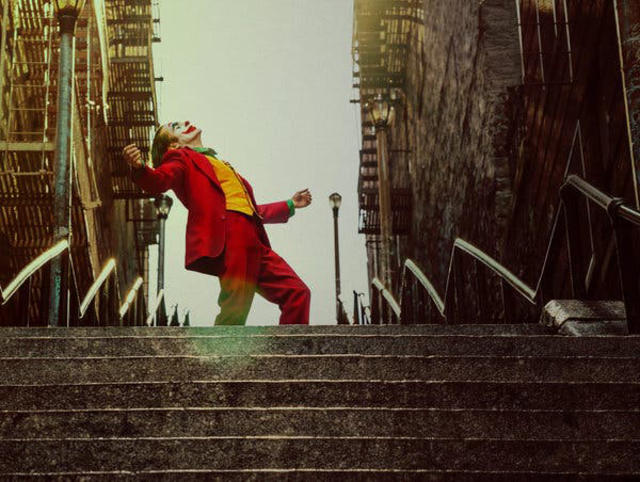 Joaquin Phoenix as the Joker in the film by Todd Phillips.

Incidents surrounding the "Joker" movie are spooking audiences in disturbing ways. A Huntington Beach movie theater was closed last Thursday after a credible threat associated with the film. Then on Saturday, an assembled audience fled a theater in Long Beach after a man wearing a backpack walked to the front of the theater and was "surveying the crowd." He was detained and found not to have weapons. Deadline | Long Beach Post

Reviewer: "Joker" has stirred up a fierce debate, "but it's not interesting enough to argue about." N.Y. Times 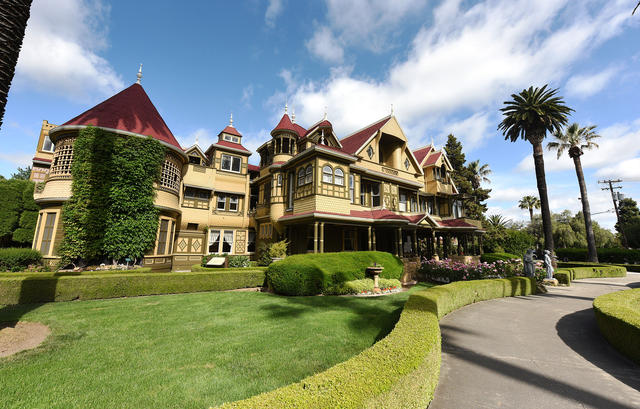 The Winchester Mystery House in San Jose is the product of 38 years of continuous construction.

A few miles from Apple's flawlessly crafted spaceship campus is a monument to chaos.

In 1886, Sarah Winchester, a widowed heiress of the Winchester Repeating Arms Company, bought a small farmhouse in San Jose, then spent the next 38 years expanding it — stopping only upon her death. The result, later dubbed the Winchester Mystery House, is a jumble of 160 rooms, 10,000 windows, and 2,000 doors. It has skylights that never see the sky, staircases that go down then up again, and doors that open onto blank walls.

There's little record of Winchester's motivations. In the void, a legend has grown — repeated in news accounts, marketing materials, and a 2018 film starring Helen Mirren — that she built the labyrinthine mansion to ward off vengeful ghosts of those killed by Winchester rifles.

But historians give the tales little credence. Letters written by Winchester suggest that she less a madwoman than a novice hopelessly in over her head. "I am constantly having to make an upheaval for some reason," she once wrote to her sister-in-law. 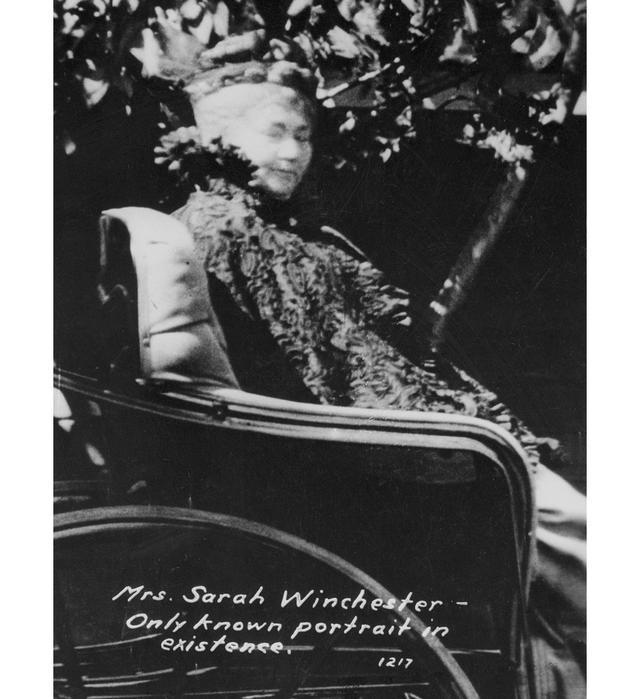 Sarah Winchester in an undated photo.

In this view, according to Colin Dickey, a historian of haunted places, Winchester was an architectural pioneer at a time when women were absent from the profession. "The Winchester mansion sprawls and flops in a dozen different directions, moving like a coral reef," he wrote. "Its aesthetic, its beauty, is precisely in its lawlessness."

Still, after Winchester’s death in 1922, her house was deemed worthless. It fell into the hands of John H. Brown, a theme park worker who reinvigorated the spooky rumors and turned the mansion into a tourist attraction. Harry Houdini came for a visit, declaring "Never was there such a marvelous place." With the great illusionist's seal of approval, the business grew.

In time, the project that had warded off visitors throughout Winchester's life became after her death a destination for hundreds of thousands of visitors from around the world. Atlas Obscura | SFGate.com

Scheduling note: The newsletter will pause Oct. 11-14 over the Columbus Day weekend.