PG&E announced that it had resolved differences with creditors over how to restructure, clearing a major hurdle to its exit from bankruptcy. But another major obstacle remains: Gov. Gavin Newsom. In a court filing, the governor urged a federal judge to block the plan, saying PG&E hasn't changed a thing to address safety and other concerns he raised last month. If it fails to do so, he said, a government takeover was on the table. N.Y. Times | A.P. 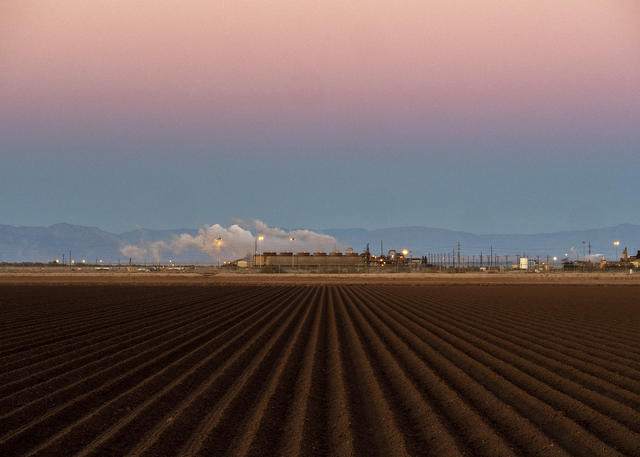 A geothermal plant churns out climate-friendly electricity near the Salton Sea.

Geothermal plants generate emissions-free, renewable electricity around the clock by tapping steam from naturally heated underground reservoirs — and California has some of the strongest hotspots in the country. Yet development has been limited. But that now appears to be changing as the state moves to abandon fossil fuels, with the first new geothermal plants in nearly a decade planned in Imperial and Mono counties. L.A. Times

The world's largest geothermal area is nestled in the Mayacamas Mountains of Northern California. The Geysers produce nearly 60 percent of the power demand along the North Coast. Wikipedia

Talk among California policymakers has shifted from "mitigation" to "resiliency" in their approach to climate change. That's why officials are proposing not one, but three ballot proposals seeking approval for billions of dollars to prepare for floods, fires, drought and other risks. Why so much? It won't be cheap, for example, to relocate an entire coastal city. CalMatters

Tumbleweeds may seem synonymous with the American West. But they're not even from here. Known as Russian thistle, they are thought to have arrived via flaxseed imported from Ukraine in the 1870s. Now the invasive plant is pretty much everywhere in Central California, where they grow in abandoned agricultural fields and end up causing road accidents, fire hazards, and all-around annoyance. Here's video of an army of tumbleweeds somersaulting across Lemoore last week. Weather Channel

Deaths from heroin and fentanyl overdoses in San Francisco more than doubled in 2019 — rising from 134 in the prior year to 290. The increase is even more stark when compared to 2009, when just 25 deaths were linked to the drugs. The statistics suggest that the nation's opioid epidemic has completed a westward expansion. "We were protected for a moment, but now it's come out here," a drug expert said. S.F. Chronicle | KRON 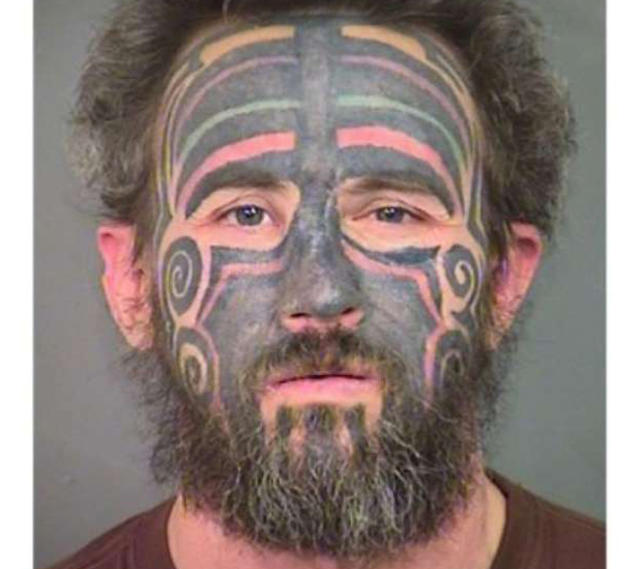 Redding has been on edge since the police department issued a terse statement noting that a sexually violent predator had returned to the Northern California community after being released from prison. Pirate, as he's legally known, is hard to miss with a face full of tattoos. "I know it's worrying to know that he is on the streets but he is a free man," a police official said. "You have to treat him like every other man you see on the street." Record Searchlight | SFGate.com

San Francisco's new district attorney, Chesa Boudin, announced that his office will no longer ask for cash bail as a condition for defendants' pretrial release. The new policy aims to quickly release defendants who are not deemed dangerous. "From this point forward," Boudin said, "pretrial detention will be based on public safety, not on wealth." S.F. Chronicle | S.F. Examiner 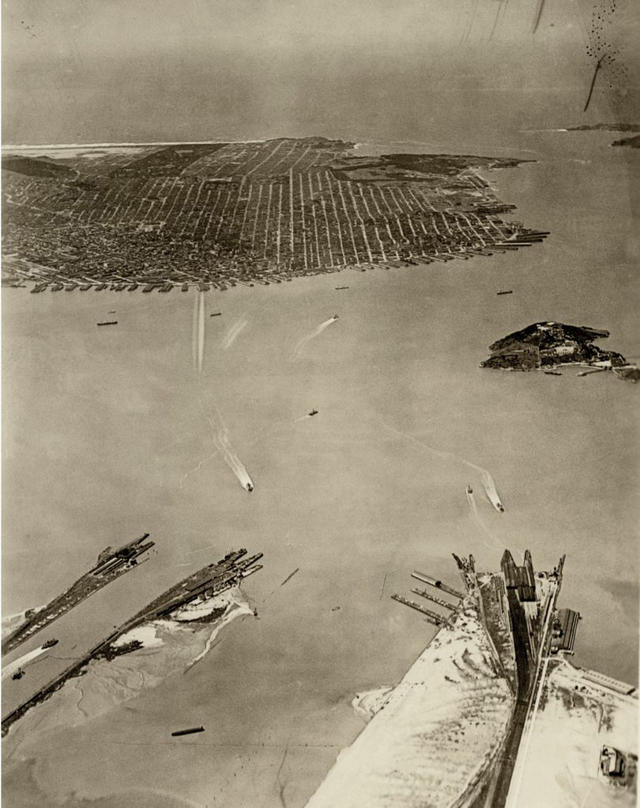 The San Francisco Bay and Peninsula before the addition of the Golden Gate and Bay Bridges. Yerba Buena Island is at right.

A century ago, an Oakland engineer was inspired by the Wright brothers to build his own aircraft. Stanley Page did just that, then soared over the Bay Area, leaned out of the cockpit with a camera, and captured stunning aerial views of the Bay Area as it appeared before its iconic bridges were built. "It almost feels like looking at Google Maps through a time machine," wrote East Bay Yesterday's Liam O'Donoghue. "I could stare for hours." Page's images are now on display at SFO Museum. East Bay Yesterday | SFO Museum

Four people were killed when a small plane crashed during takeoff at Corona Municipal Airport. Witnesses said the pilot had trouble getting airborne, but gunned the engine rather than abort the takeoff, then crashed and burst into flames. "He didn't have enough speed to lift off," one said. "He didn't pull back." Press-Enterprise | L.A. Times 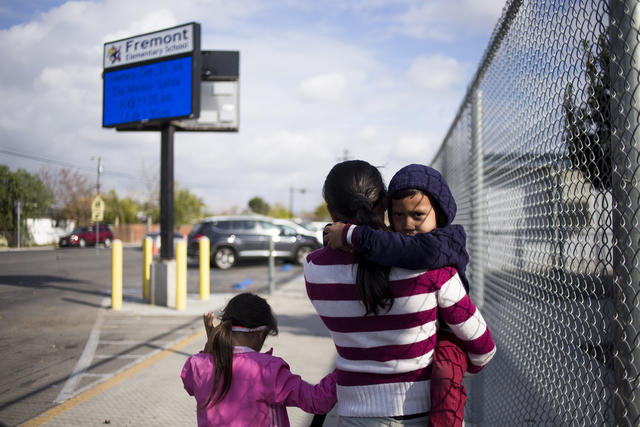 Opportunities are elusive for kids in Bakersfield, compared to other places.

Jenna Schoenefeld for The Washington Post, via Getty Images

Researchers at Brandeis University used several factors — such as poverty rate, school quality, and green space — to rank cities by the opportunities they afford children. The hardest city to grow up in America: Bakersfield, where more than half of residents under 18 live in low-opportunity neighborhoods. Axios | 23ABC Bakersfield

The reason a motorist ran a car full of teenagers off the road in Riverside County, killing three of them? According to a surviving teenager, the group was out goofing around and ding-dong ditched the man's house. He then chased the kids down in his vehicle and rammed their car, the boy said. NBC Los Angeles | A.P. 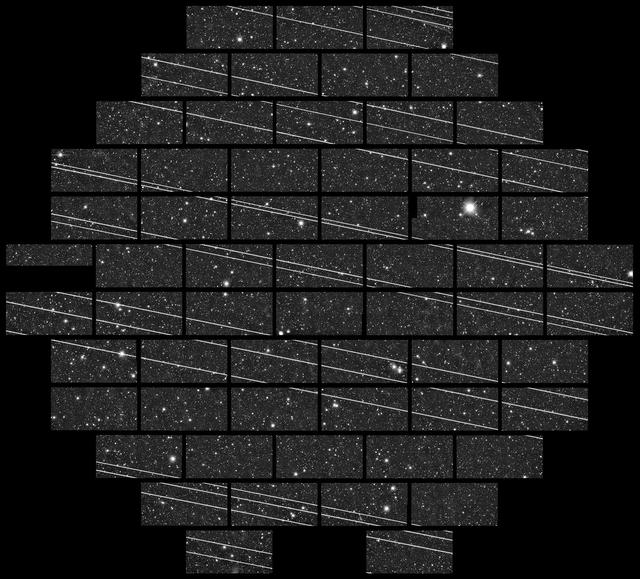 An image captured in November from an observatory in Chile captured streaks of light from Starlink satellites.

Among Elon Musk's colossal ambitions is a project to deploy small satellites that will connect the entire planet to the internet. SpaceX, based next-door to LAX, has already put 180 Starlink satellites in the sky with approval to add 12,000 more. If that happens, astronomers say, our view of the cosmos will be forever marred with thousands of streaking points of light outnumbering the roughly 9,000 stars visible to the naked eye. Vox