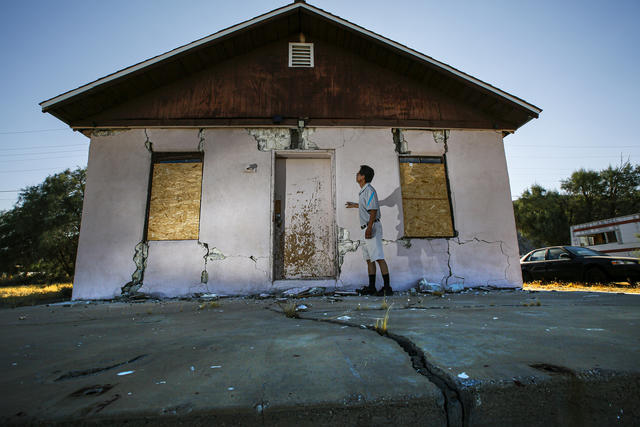 A man inspected earthquake damage in Trona on July 5.

California is releasing an early earthquake warning app to the public. The MyShake app, the nation's first statewide quake warning system, relies on hundreds of sensors installed in the ground throughout the state. It could give users anywhere between a few precious seconds and a minute to prepare before shaking begins depending on distance from the epicenter of an earthquake. L.A. Times | A.P.

Quiz: 10-second warning. What do you do? S.F. Chronicle

Defending its massive intentional power shutoff, PG&E said it found more than 100 cases of damage or hazards to power lines during the critical fire weather conditions last week. "These findings suggest that we made the right call," a company official said. Sacramento Bee | ABC10

Forced blackouts may be part of the new normal in California. "Some areas of California could see 15 or more blackouts a year, lasting two to five days." Vox 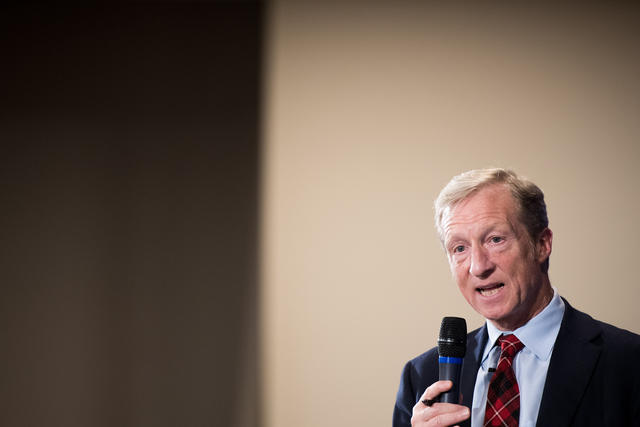 Tom Steyer has been a prominent voice calling for the impeachment of President Trump.

California billionaire Tom Steyer spent a staggering $47 million of his own fortune on his long shot presidential bid between July and September. That's an average of about $566,000 every day. Statistician Nate Silver thanked Steyer for providing political scientists with "basically like a randomized control trial of 'how much can $47 million worth of ads from a random rich guy move the polls when the candidate doesn't really have earned media or anything else going for him.'" Mercury News

Blizzard Entertainment, an Orange County video game developer, has been punishing gamers for expressing support for the protests in Hong Kong. In the last couple weeks, three e-sports players held up a "Free Hong Kong" sign during an official stream and another player shouted "Liberate Hong Kong, revolution of our times." All of them were suspended, with one forced to forfeit $10,000 in prize money. U.S. politicians from both parties condemned the company. "Blizzard shows it is willing to humiliate itself to please the Chinese Communist Party," Sen. Ron Wyden of Oregon wrote. The Verge | Vice 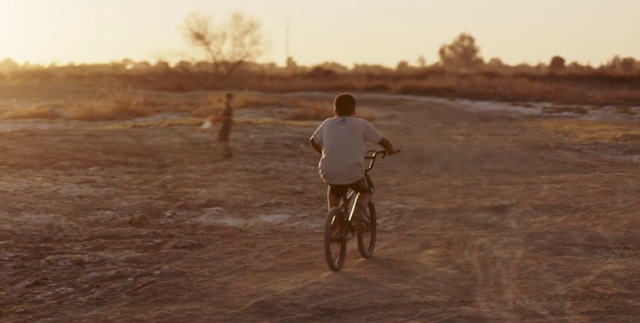 A still from "What Happens When Your Town Dries Up?"

During the height of California's last drought, a filmmaker created a short documentary in Stratford, a small farming community in the San Joaquin Valley. The title: "What Happens When Your Town Dries Up?" "Being able to work with the ground and with nature has been very satisfying," one farmer said. "But of late, when the water becomes scarce, we don't get a lot of help from the people who want the food that we grow." The Atlantic (~8 mins)

California's indigenous communities have been practicing controlled forest burning techniques for thousands of years — so long that many species have been shaped by the modified ecosystems. "We have fire-dependent species that coevolved with fire-dependent culture," said Frank Lake, a research ecologist and Yurok descendant. "When we remove fire, we also take away the ecosystem services they produce." A WIRED report on the "quiet, intentional fires of Northern California" features some fantastic photography. WIRED 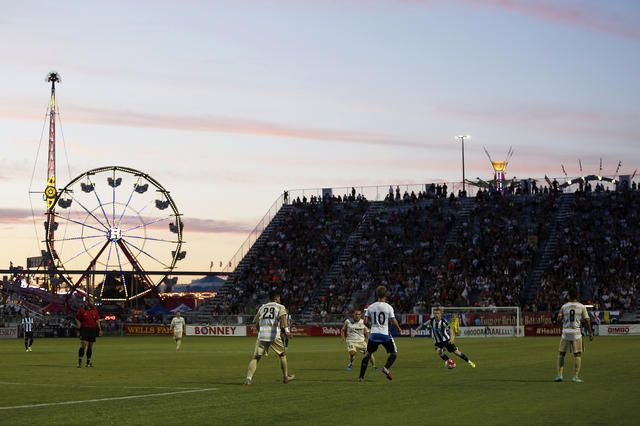 Northern California is getting another professional sports team. Major League Soccer plans to announce that Sacramento Republic FC will join the league as its 29th team in 2022. Soccer fans are overjoyed, but so is the city at large. The announcement is expected to catalyze a transformation of the capital's booming downtown anchored by a $250 million soccer stadium. Sacramento Bee | KCRA

A writer and a street photographer spent four months investigating how artists, gallery owners, curators, and arts supporters are surviving the Bay Area's exorbitant cost of living. "I've seen more change in San Francisco in the last two years than ever before," said a painter who's lived in the Bay Area since 1986. "It's lonely here now — so many of the people in my community have had to leave." Hyperallergic 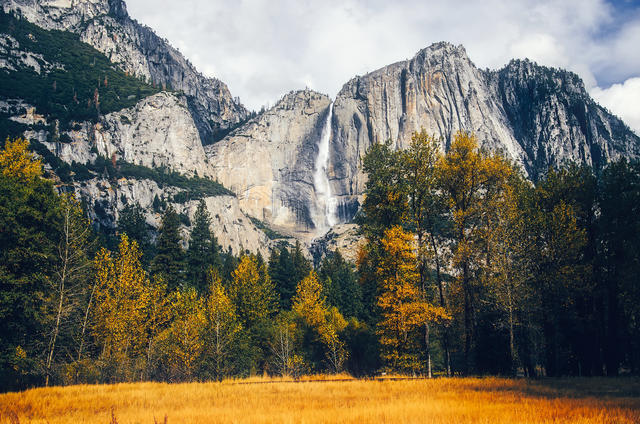 Autumn is a special time in Yosemite. The tourists empty out, the smell of campfires fills the crisp air, the waterfalls slow to a trickle, and while the sequoias may not break out in color, the oaks, maples, and dogwoods do. Photographer Glenn Robinson posted some dazzling recent photos on Instagram. @glennleerobinson | Outdoor Project 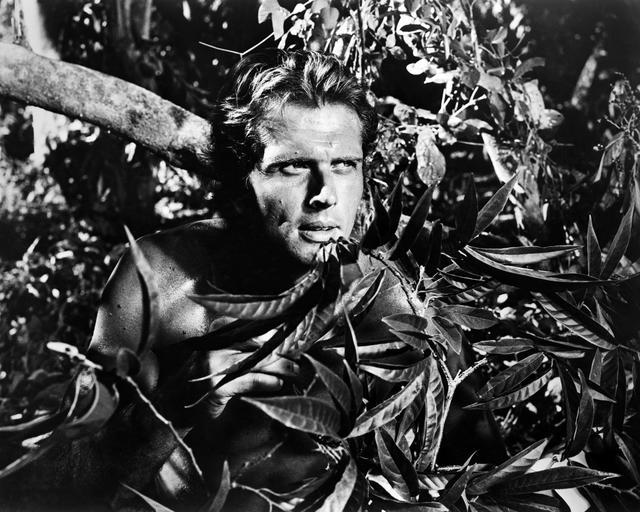 The wife of the 1960s "Tarzan" series star Ron Ely was fatally stabbed in the couple's Santa Barbara County home by their 30-year-old son, the authorities said. Police responded to a family disturbance at the home in Hope Ranch Tuesday night and found Valerie Lundeen Ely, 62, dead. The son, Cameron Ely, was found outside. Four deputies deemed him a threat and opened fire, killing him, officials said. A.P. | Reuters

The Los Angeles City Council wants to require that Uber and Lyft pay their drivers a minimum of $30 an hour — $15 for pay and $15 for expenses. Studies have shown that ride-share drivers earn as little as $11.77 a ride after expenses and the company's cut from each ride. LAist | L.A. Times 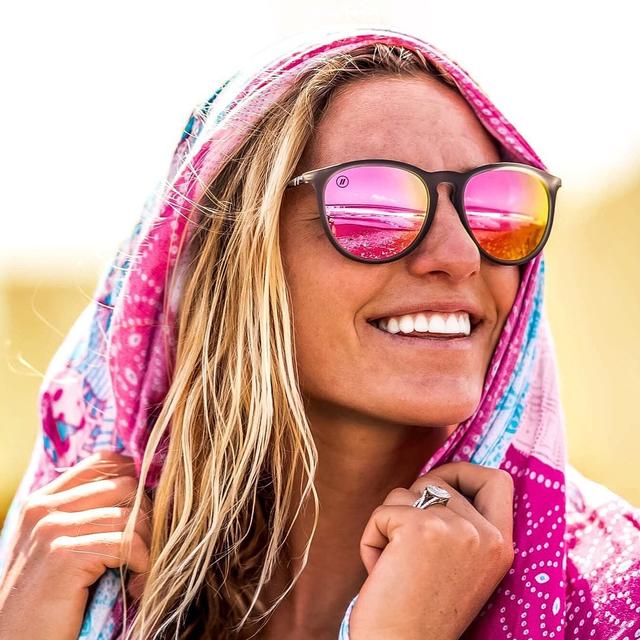 A 31-year-old surfer from San Diego is making a fortune selling sunglasses named after local neighborhoods to customers around the world. Blenders Eyewear brought in $1.3 million in sales in 2016. This year, it's expecting $45 million. S.D. Union-Tribune

Oxnard is offering to plant fruit trees in people's yards in a bid to fight climate change. Residents can have a lime, lemon, peach, orange, or avocado tree planted free of charge. Neighborhoods disproportionately affected by pollution will be prioritized. Ventura County Star | KTLA 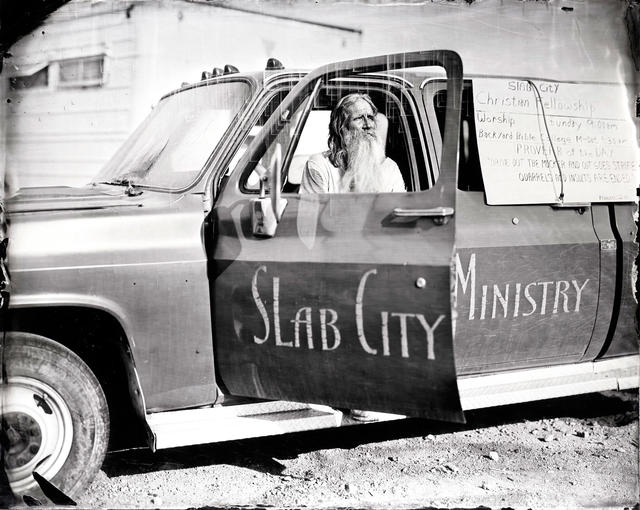 The photographer Ian Ruhter spent two years designing and building a massive camera that would produce the world's largest ambrotypes, made by projecting light onto 60-pound slabs of glass. Then he ventured out to the rugged communities surrounding Southern California's Salton Sea. The results are gorgeous. Popular Photography | IanRuhter.com 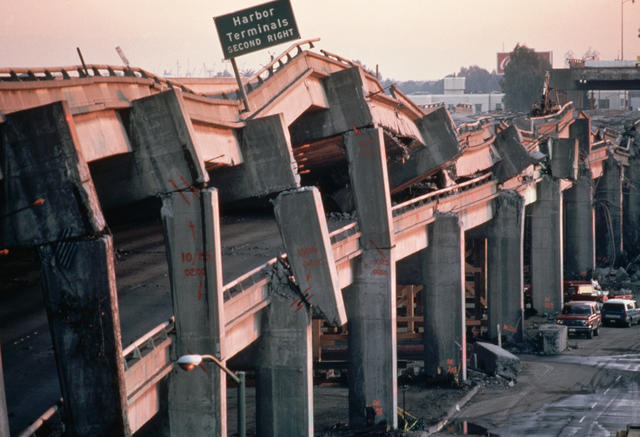 The crumpled Cypress Street Viaduct caused the majority of deaths on Oct. 17, 1989.

It was on this day 30 years ago that the San Andreas Fault shuddered for 15 seconds, unleashing devastation across the Bay Area. Yet the death toll from the Loma Prieta earthquake was not nearly as severe as it might have been thanks to an unlikely savior: baseball.

As it happened, the quake struck shortly after 5 p.m. on Oct. 17, 1989 as 60,000 people huddled in Candlestick Park for the third game of the World Series. Many people had left work early to get in front of a TV, leaving the evening commute much lighter than usual.

After the I-880 Cypress Street Viaduct in Oakland crumpled and a section of the Bay Bridge snapped off, initial media reports estimated a death toll of roughly 300, based in part on projections of normal traffic. That number fell to 63. FoundSF 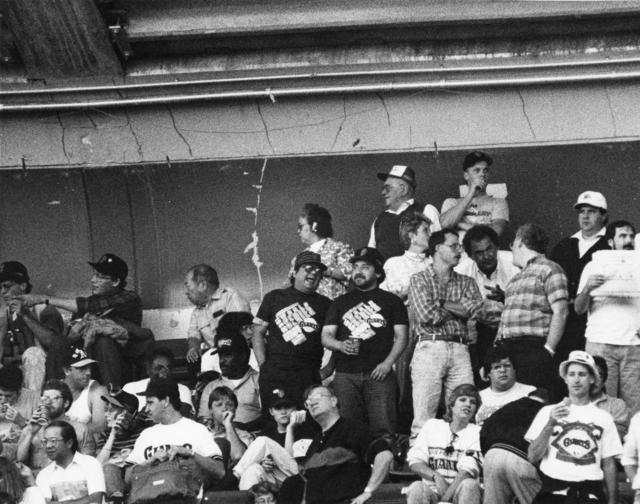 "Well, folks, that's the greatest open in the history of television, bar none." Here is the moment the earthquake interrupted the World Series broadcast on ABC. YouTube

The Loma Prieta earthquake led to a leap of civic imagination that changed San Francisco for the better. "Callous as it sounds, the tragedy of the moment can have beneficial long-term effects." SFGate.com

Then and now: Photos show how the Bay Area was changed by the earthquake. S.F. Chronicle

Wednesday's newsletter misstated the location of the NuStar Energy petrochemical storage facility in the Bay Area. It was in Crockett, not Dublin.