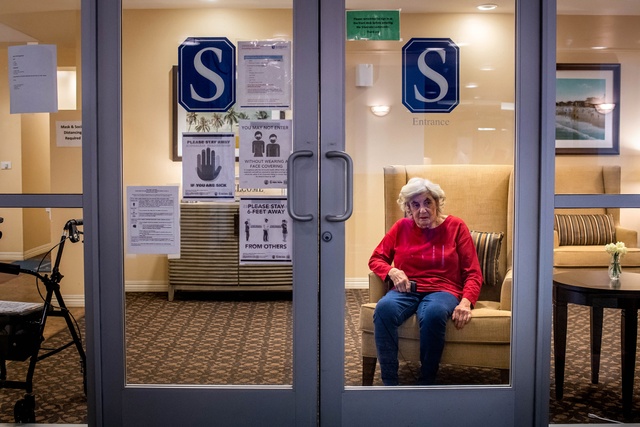 Cynthia Tachner, 86, waited to visit her daughter through glass in Redondo Beach on Monday.

The CDC said Monday that people who have been fully vaccinated could embrace long-denied freedoms, such as gathering indoors without face masks or distancing. The new guidance allows barefaced dinners with friends, but more importantly, said Dr. Monica Gandhi of UCSF, it offers desperately needed relief to people isolated in care facilities. “The effects of loneliness and depression the pandemic has had on older people and health care workers is very real,” she said. S.F. Chronicle | N.Y. Times

"For the teenagers of Jesuit High School, every morning starts with a single-question exam — Covid-19 positive or not?"

The L.A. Times profiled a Catholic high school in Sacramento that reopened two months ago and has had no Covid-19 outbreaks. The school's record is not an anomaly. In San Francisco, officials have linked open schools to fewer than five outbreaks, though roughly 96 parochial and private schools have been operating with in-person instruction. 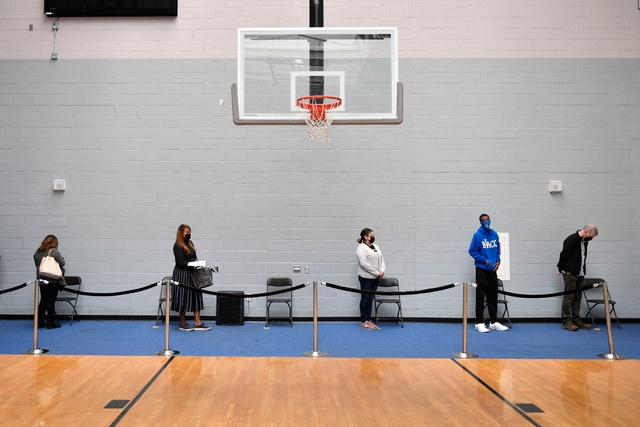 People waited to be vaccinated at a clinic for education workers in Los Angeles on Monday.

Of the nation's 10 largest school systems, only Los Angeles has yet to resume classroom instruction for significant numbers of students. Yet coronavirus transmission in the county has plummeted, teachers are being vaccinated, ventilation systems have been overhauled, and an ambitious testing program has been put in place. Families are coming to terms with a bitter truth, wrote the N.Y. Times: "With the spring term scheduled to end on June 11, only a sliver of their pandemic school year is likely to take place face-to-face."

Ral Lopshire lost her job in a cosmetics store last March. Then she lost her housing. By Thanksgiving she was homeless. "Nobody understands how cold it really does get at like 3 a.m.,” she said.

While much has been written about the flight of affluent workers from San Francisco, Joe Eskenazi sought out the stories of the "real individuals" who have been economically banished from the city. Mission Local

Kern County approved a controversial plan that fast-tracks tens of thousands of new oil and gas wells over the next 15 years. During a daylong hearing, hundreds of people weighed in, many of whom warned of potential health impacts on nearby communities. Supervisor Zack Scrivner said opponents failed to appreciate that California still needs oil even as it transitions to cleaner energy. "Why on earth would we import 60, 70 percent of California's oil needs from other countries when we could produce so much here?" he said. Bakersfield Californian | A.P. 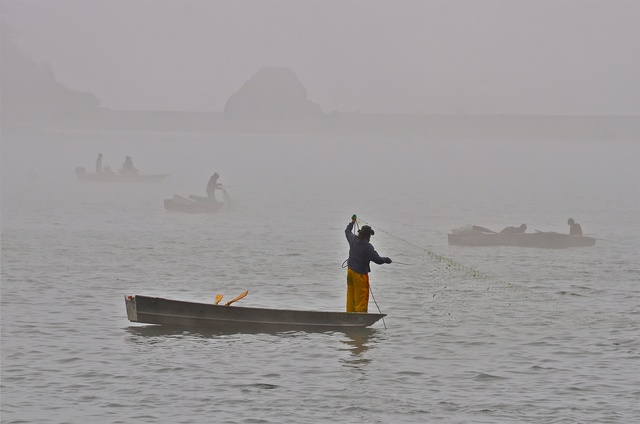 Yurok fishermen on the Klamath River.

For decades, activists have been fighting for the removal of four dams choking the Klamath River, which courses through Indigenous lands in Northern California. In a long-shot email last summer, tribal leaders invited officials from Berkshire Hathaway, whose subsidiary owns the dams, to join them on the river. They agreed. But as the group drifted along, a floating blockade came into view. It was a group of some of the Klamath's most ardent activists, who took turns addressing the powerful executives. "Don't think this is an Indian problem," one said. "It's your fucking problem, too." No one can pinpoint for certain the moment Berkshire's posture toward dam removal shifted. But some believe it was that day on the river. North Coast Journal 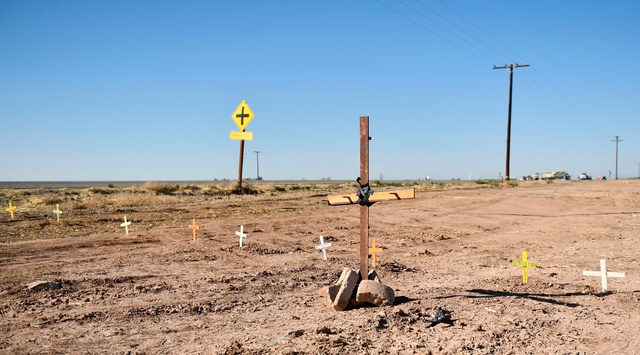 Crosses were placed near the site of a March 2 crash that left 13 people dead near Holtville.

The columnist Gustavo Arellano on the "ghosts of migrant dead" in California: "These migrant dead haunt California, like an Edgar Allan Poe horror story. They wander the border and farms, linger on the side of roads and in overcrowded spaces. Forgotten cogs of the Golden State machine, a land where Latino labor has always been simultaneously essential and expendable." L.A. Times

Sen. Bernie Sanders weighed in on the effort to recall Gov. Gavin Newsom on Monday, tweeting in part: "Right-wing Republicans in CA are trying to recall @GavinNewsom for the crime of telling people to wear masks and for listening to scientists during COVID. Extremist Republicans have done enough to undermine democracy already." The support of Sanders, who decisively won California’s 2020 presidential primary, could prove invaluable to Newsom. Politico

The recall vote looks increasingly likely. Under the rules, Newsom could have more support than the top vote-getter and still lose his job. CalMatters

Derick Almena, the master tenant of the Oakland warehouse that caught fire and killed 36 people in 2016, will remain out of jail after a judge accepted a plea deal Monday. Judge Trina Thompson sentenced Almena to 12 years, but he will serve just 18 more months at home with an ankle monitor because of time served and good behavior. Some victims' families denounced the sentence as too lenient. In a statement, Almena said he was "sick with shame." Mercury News | A.P. 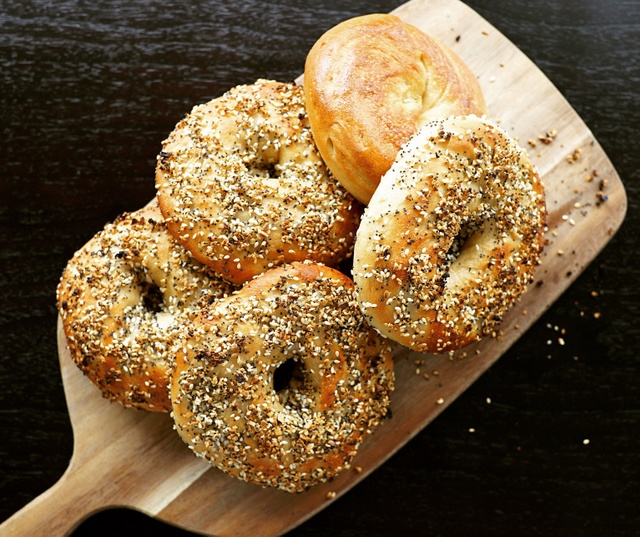 The New York Times: "The best bagels are in California."

A century after Jewish immigrants introduced the bagel to Manhattan, West Coast bakers are now driving a great bagel boom, wrote food critic Tejal Rao. At Boichik Bagels in Berkeley, for example, the bread is "thick but yielding, chewy but not densely so, with a shiny, sweet-and-salty crust and a rich, malty breath that fills up the bag before you even get home." The internet had opinions.

“The streets grab you up, man.”

Demetrius Mitchell, standing barely 5 feet 10 inches, was a legend of the Bay Area street basketball scene in the late 1980s. Former NBA stars Gary Payton and Jason Kidd said even they were outclassed by Mitchell. "No comparison," said Kidd. So when a tweet on Christmas Day announced Mitchell had died, there was an outpouring of grief. Except it wasn't true. Ron Kroichick wrote a riveting account of how Mitchell tumbled from playground legend to a man addicted to drugs, often homeless, and repeatedly behind bars. S.F. Chronicle 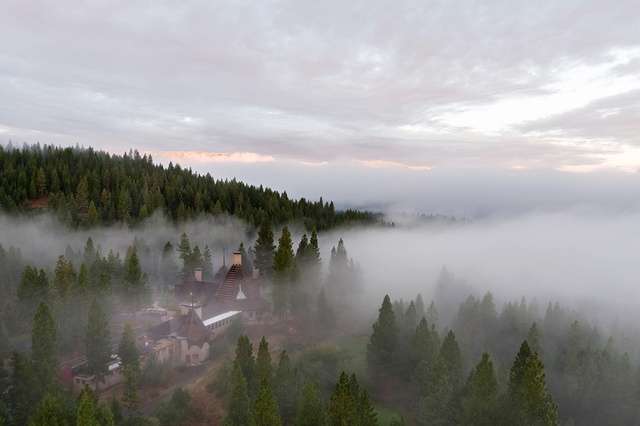 Frank Lloyd Wright designed the clubhouse at Nakoma, a resort in the Lost Sierra.

A taste of the scenery in the Lost Sierra. 👉 Vimeo

An earlier version of this newsletter misspelled the name of a Mission Local writer. His name is Joe Eskenazi, not Joe Eskanazi.