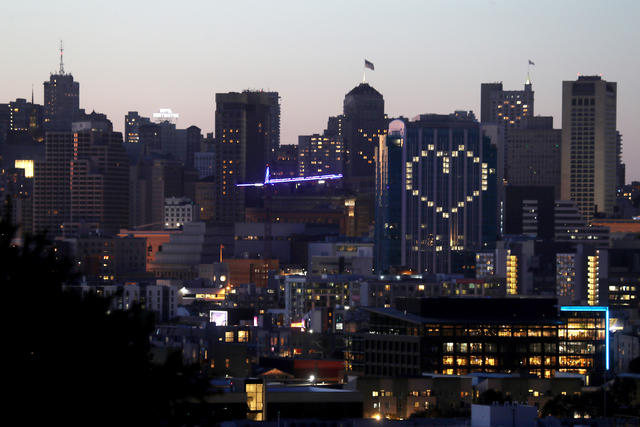 A heart of window lights was illuminated at the InterContinental San Francisco hotel on Thursday.

"That's going to turn out to be — if all goes well and I'm reading the tea leaves right — one of the major public health triumphs of modern times."

California's coronavirus outbreak looks almost unrecognizable from less than three weeks ago, when the Bay Area adopted the nation's first shelter-in-place order. Since then, the state's biggest hot zone has shifted from Silicon Valley to Southern California, and New York's caseload has soared past that of California. Mercury News

California has won praise for acting early, but a major testing backlog is obscuring any reliable estimate of the number of infected Californians. Out of roughly 93,000 tests administered statewide, nearly 60,000 remained pending — far more than other states — as patients wait up to 12 days for results. S.F. Chronicle | A.P.

A single Pentecostal church in a suburb of Sacramento has had 71 coronavirus cases, and church leaders have refused demands to stop fellowship meetings, officials said. "They've basically told us to leave [them] alone, that they will continue to meet, that it's very important to their community, and they don't want any interference in that," a county spokeswoman said. Sacramento Bee | Capital Public Radio 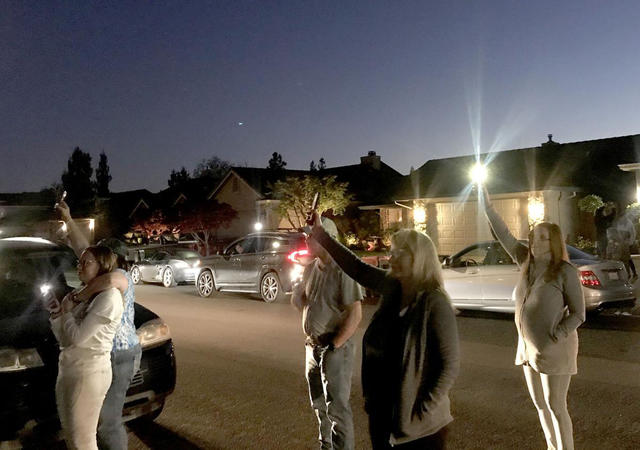 People held vigil outside the home of Karen Baumbach in Lodi on Wednesday.

On Wednesday evening, dozens of motorists parked in front of the home of Karen Baumbach in Lodi and held lit cellphones aloft from their windows. Baumbach's husband Jeff, a nurse, died on Monday after testing positive for COVID-19. He was 57. Karen Baumbach has been quarantined in her home for two weeks — herself infected by the virus. "She's broken," her mother said. Lodi News-Sentinel

Here are the latest coronavirus totals, including infections at a homeless shelter in San Francisco and a nursing home in Silicon Valley, and the deaths of a Riverside County sheriff's deputy and a 32-year-old Los Angeles woman. Tallies by the S.F. Chronicle and N.Y. Times: 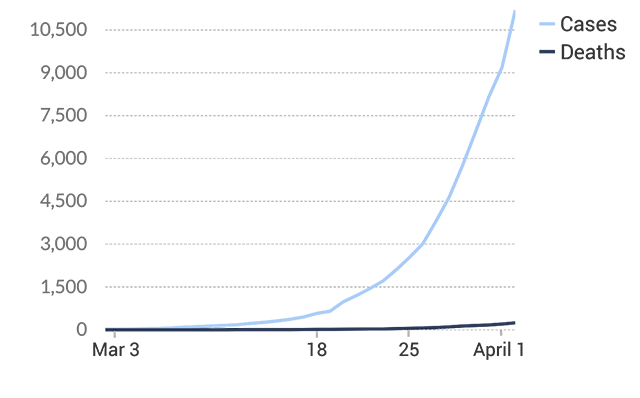 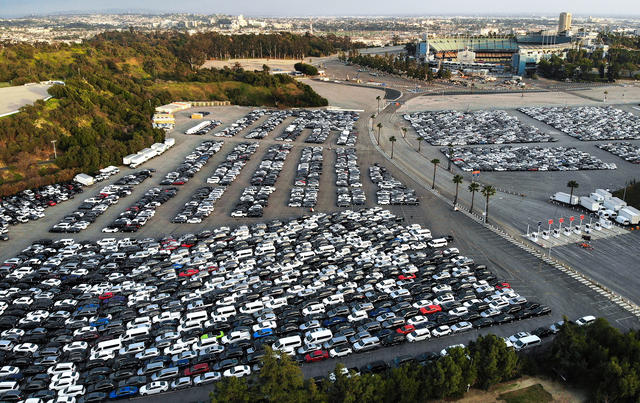 Unused rental cars were parked in a lot at Dodger Stadium on Thursday.

The N.Y. Times published maps that show how, even as California and other places ground to a halt, people in Florida and the Southeast continued to travel widely. An epidemiologist said the inconsistent policies could have consequences even for places that acted aggressively.

"Let's assume that we flatten the curve, that we push transmission down in the Bay Area and we walk away with 1 percent immunity," said Dr. George Rutherford. "Then, people visit from regions that have not sheltered in place, and we have another run of cases. This is going to happen." N.Y. Times

The captain of a San Diego-based aircraft carrier was fired just days after he implored his superior officers for more resources to combat an outbreak of the coronavirus on the ship. Navy leaders said Capt. Brett Crozier, a Santa Rosa native, sent his memo to too many people, which resulted in it being leaked to the media and creating a panic. S.F. Chronicle | Washington Post 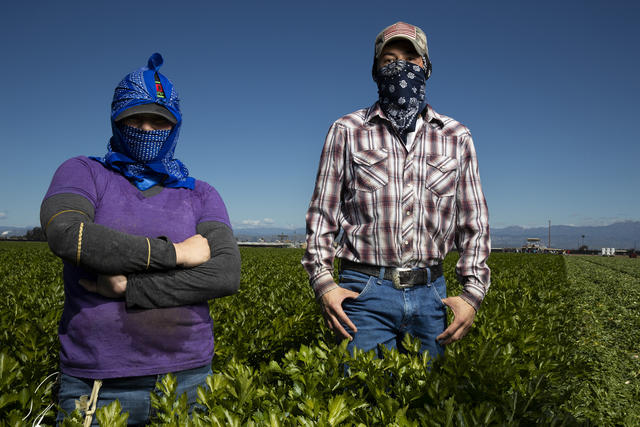 Laborers Juana Gonzalez and Henry Vasques in Oxnard on Friday. They have no masks and no gloves.

A pair of articles highlighted the farmworkers who operate at the margins of California society while playing an essential role in feeding the nation.

On this week's California Sun Podcast, host Jeff Schechtman talks with Bay Area housing activist Randy Shaw about what he called a "national disgrace" in San Francisco's Tenderloin. Even as the city has been portrayed as a social distancing role model, the homeless enclave, Shaw said, has been allowed to grow even more crowded. "It's a conscious policy and that's what's so troubling about it." California Sun Podcast

Last week, Los Angeles's Getty museum issued a challenge to its cooped-up followers on social media: recreate a work of art using only people and objects around the house. The responses have been poured in by the thousands, and many are truly inspired. Getty.edu | PetaPixel

Below, a few standouts. 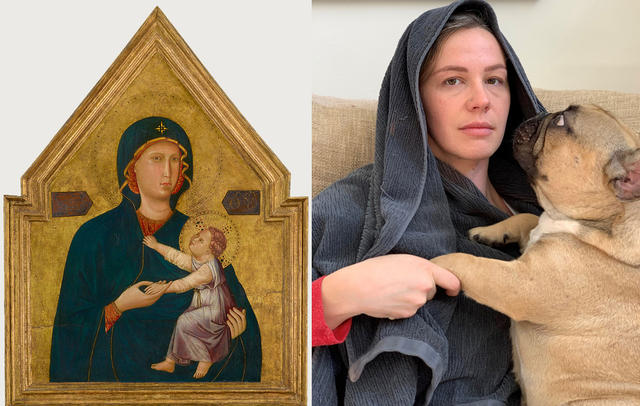 "Madonna and Child" by Master of Saint Cecilia, and a canine-inspired interpretation. 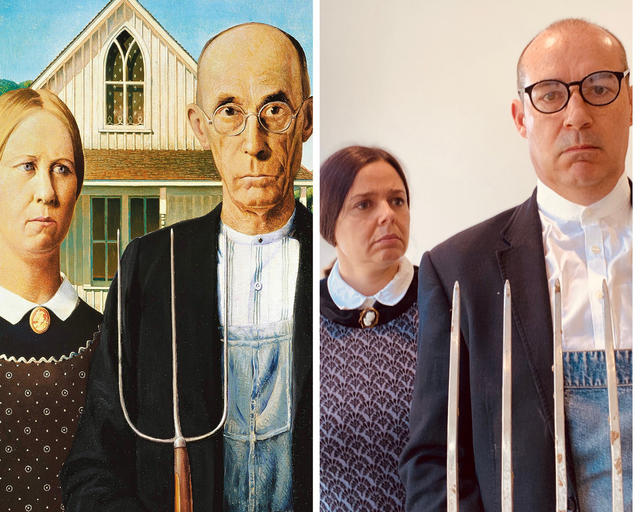 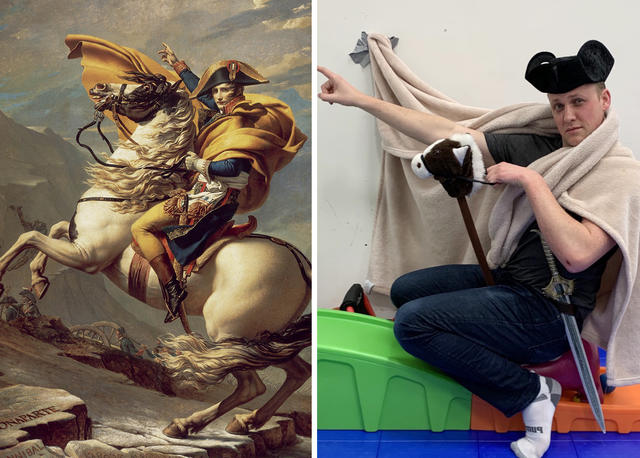 Jacques-Louis David’s "Napoleon Crossing the Alps," and recreated with a fleece blanket and duct tape. 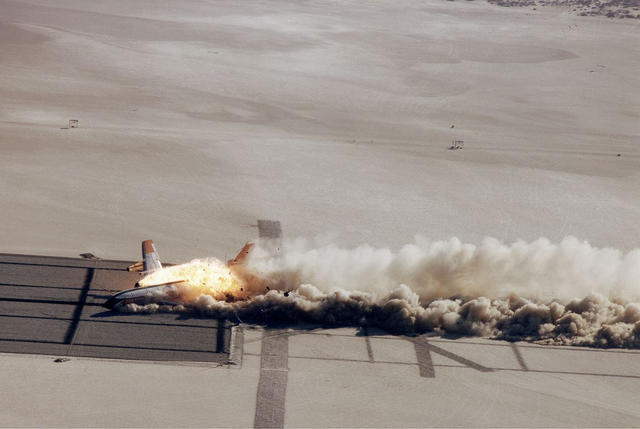