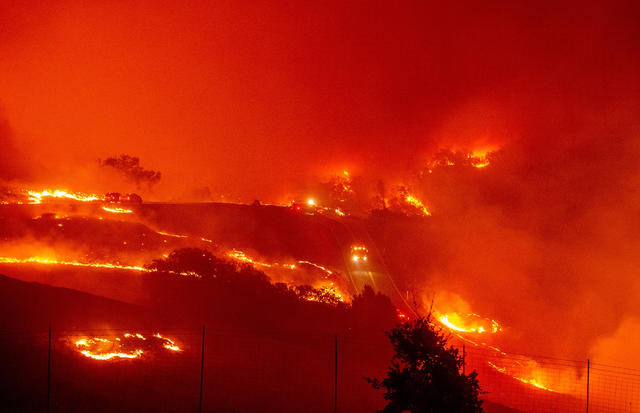 Wildfires are raging across California, from Wine Country to Southern California. 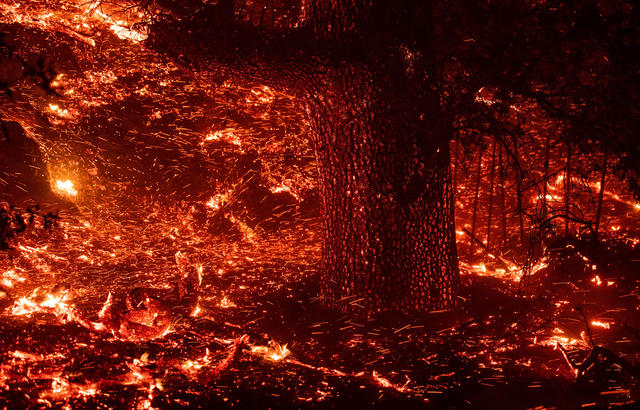 A tree glowed with fire near Geyserville. California is experiencing a new normal of destructive wildfires.

The N.Y. Times examined the new normal of living in an ecosystem that is primed to burn: "The total area burned in a single year by wildfires in the United States has only exceeded 13,900 square miles — an area larger than the country of Belgium — four times since the middle of last century. All four times have happened this decade." N.Y. Times 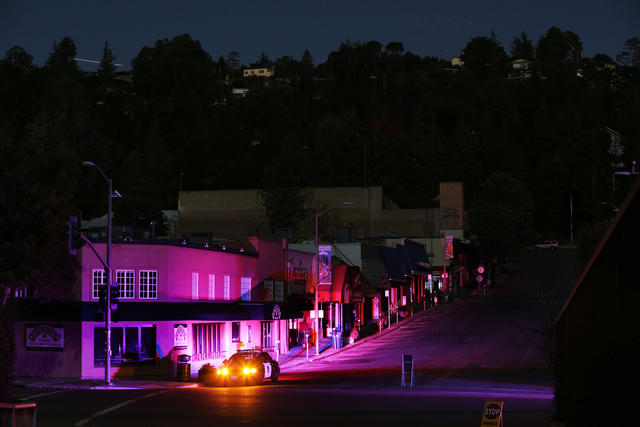 Oakland was dark on Oct. 10 after PG&E implemented a planned outage.

As PG&E began restoring power to nearly 180,000 customers across Northern California, it was preparing for a far more widespread blackout over the weekend as forecasts called for intense heat and "possibly the strongest offshore winds we've seen in years." The utility warned of shut-offs across nearly all of its territory in Northern and Central California, including the Central Coast, much of the Bay Area, the Sierra foothills, and Humboldt and Shasta counties between Saturday and Monday. KQED | S.F. Chronicle

Here is a map showing the likely outage areas.

This place in Sea Ranch is $200 a night. It's included in a list of the best rentals near Bay Area beaches, with locations in Bodega Bay, Stinson Beach, and Carmel. Curbed San Francisco

California has more than 2,300 glamping listings. A co-founder of Glamping Hub discussed some of his favorite spots on the California Now podcast. They included a safari tent with a hot tub near Anza-Borrego Desert State Park. California Now

Alicia Villanueva used to clean houses during the day and make 100 tamales at night, which she sold door to door around Berkeley. Now, two decades after moving to the Bay Area from Mexico, she's landed a contract to sell her tamales at the glittering Chase Center, new home of the Golden State Warriors. She'll supply hungry fans from a factory that can make 40,000 tamales a month. "I'm living a beautiful dream," she said. Mercury News 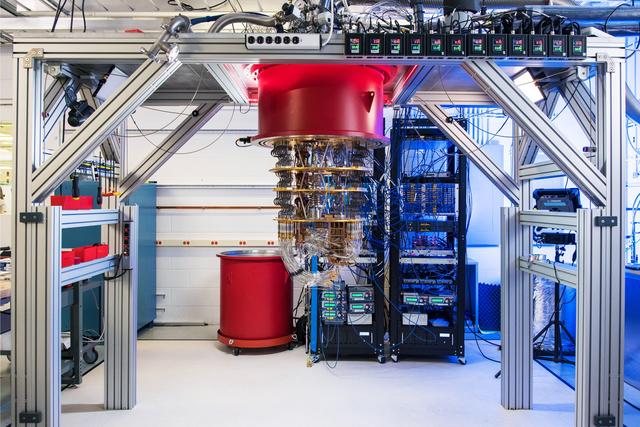 A Google team in Santa Barbara said it achieved a long-sought breakthrough called "quantum supremacy." A quantum computer was able to perform a computational task in 3 minutes 20 seconds that would take the world's most powerful supercomputers 10,000 years. An MIT professor compared the feat to the first successful flight by the Wright brothers. N.Y. Times | Ars Technica

After a sheriff's deputy was killed responding to a call in the foothills east of Sacramento, the man who placed the 911 call alleging the theft of his marijuana plants was arrested. The authorities said Christopher Garry Ross, 47, failed to disclose to a dispatcher that he was in a business arrangement with the supposed thieves, two Mexican citizens, and that they had a dispute. "Had he been truthful with our deputies and the 911 dispatcher, this tragedy would not have occurred," the El Dorado County sheriff said. Sacramento Bee | A.P. 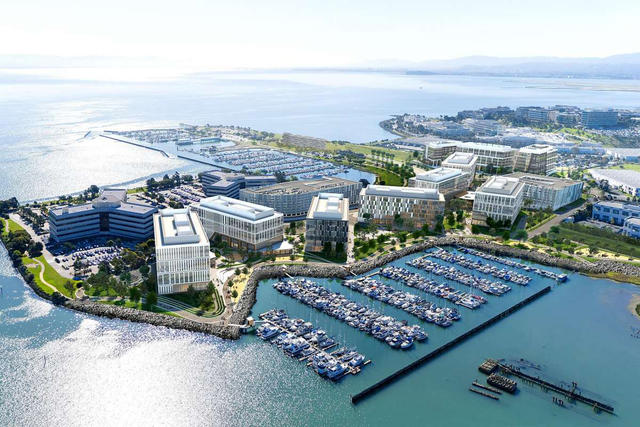 A rendering of the development in South San Francisco where Stripe signed a lease.

San Francisco is losing one of its bold-name tech companies as Stripe moves its headquarters to neighboring South San Francisco. The payment processing company, the second-most valuable private U.S. startup, blamed scarce office space. It's the latest of an exodus that's included Bechtel and McKesson Corp. "Stripe is just tip of the iceberg," a business advocate said. "If we're not thoughtful about our local business policies, this could be part of a trend." S.F. Chronicle | SFist

On this week's California Sun Podcast, host Jeff Schechtman talks with Lincoln Mitchell, the author of "San Francisco Year Zero," which makes the case that the San Francisco of today began in 1978. George Moscone and Harvey Milk were assassinated, the massacre of Peoples Temple members unfolded in Jonestown, punk rock exploded, and the Giants had a breakthrough season. "By late 1978, it wasn't obvious that [San Francisco] would survive," Mitchell said. "But it did. And that year was the transitional moment." California Sun Podcast 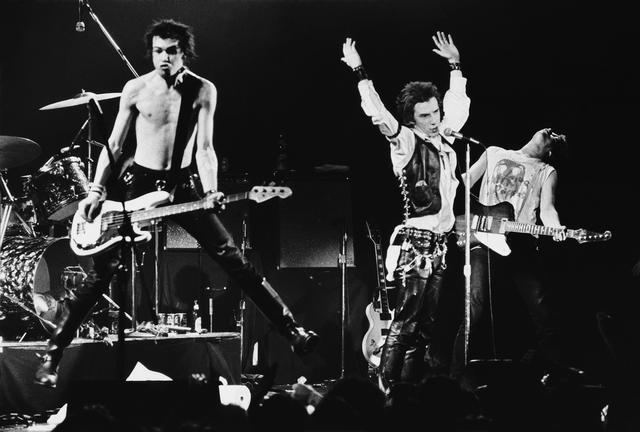 On Jan. 14, 1978, San Francisco was the center of the punk universe as Winterland hosted the Sex Pistols. It turned out to be the band's last concert ever.

When the reign of the hippies came to an end: These photos show the frenzied rise of punk in 1970s San Francisco. CNN 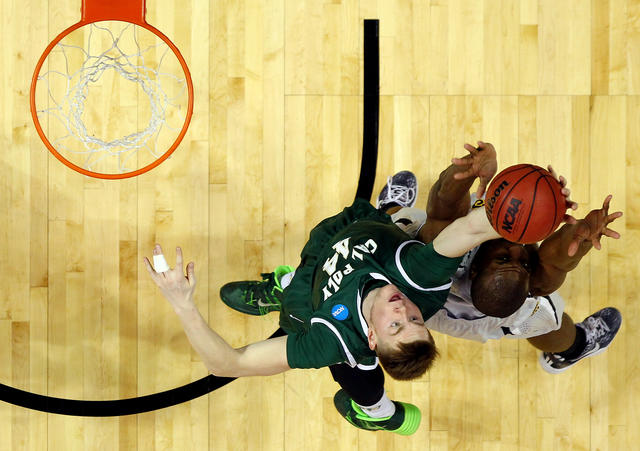 If the NCAA gets its way, student athletes at Cal Poly San Luis Obispo will lose years of past wins over what amounts to an accounting error by the school. The sanctions are in response to the campus accidentally awarding too much textbook money to some student athletes. The average overpayment: $175. Cal Poly's athletic director called the NCAA's decision despicable. "We have one student involved who got $4.61," he said. "For $4.61, we're going to vacate her career records." The campus is appealing. The Tribune | ESPN

The son of the Los Angeles City Council president got a sweet deal on rent for years as his father helped the building's executives advance a controversial high-rise, an investigation found. As other tenants' rents went up, Herb Wesson III's stayed the same. People who lived in the building said they knew what was going on. "It didn't sit well with me," one said, "but I didn't know what I could do about it." L.A. Times 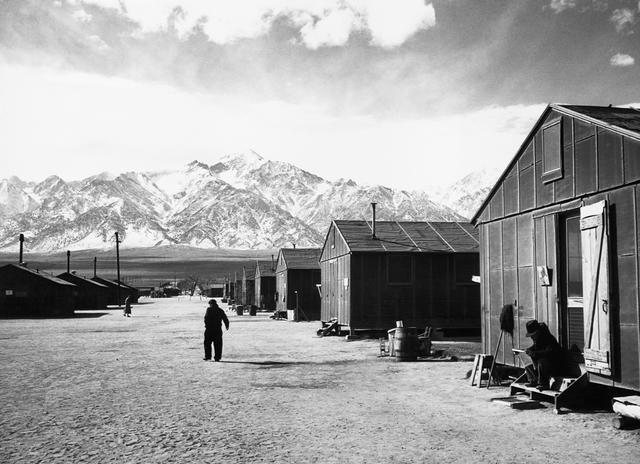 A view of the Manzanar Relocation Center during World War II. Captives used to sneak out to go fishing.

This month hikers discovered a human skeleton on a remote trail on Mt. Williamson, California's second's highest peak. Investigators now think the find may be linked to a dark chapter of U.S. history. In the closing days of World War II, a 46-year-old Japanese American sneaked off from the infamous Manzanar internment camp for a fishing trip and got caught in a freak snowstorm. Giichi Matsumura was laid to rest in the mountains.

Nearly 75 years later, investigators are trying to figure out if the bones belong to Matsumura, who became a sort of ghost of Manzanar. If so, there's already a place for them at a cemetery in Santa Monica, where a granite headstone bears the names of Matsumura and his wife, who died in 2005. A.P.

A couple chose a buyer for their beloved home who said he wouldn't tear it down — then he did. Neighbors surrounded a bulldozer in vain, then "watched, yelled, and cried" as workers razed the elegant Tudor-style home in Los Angeles's Hancock Park neighborhood so that the new owner could replace it with something bigger. "It really is devastating to watch these beautiful old homes be completely demolished," the former owner said. Curbed Los Angeles 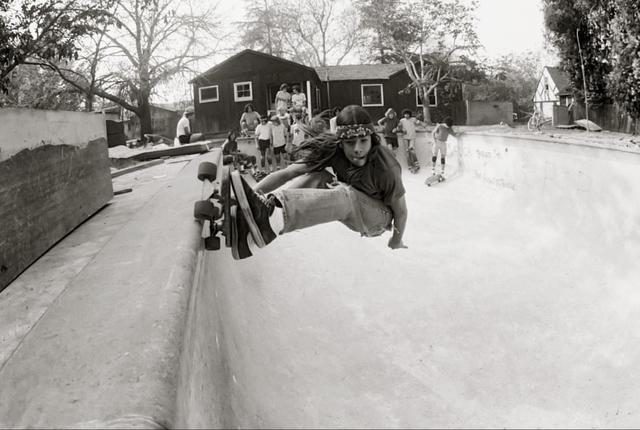