California has fared better than other places, but don't expect stay-home orders to be lifted any time soon. Experts have staked out four goal posts:

Gov. Gavin Newsom on Wednesday cautioned against moving too quickly: "If at any moment we pull back, you could see that curve go back up." Mercury News | N.Y. Times | L.A. Times 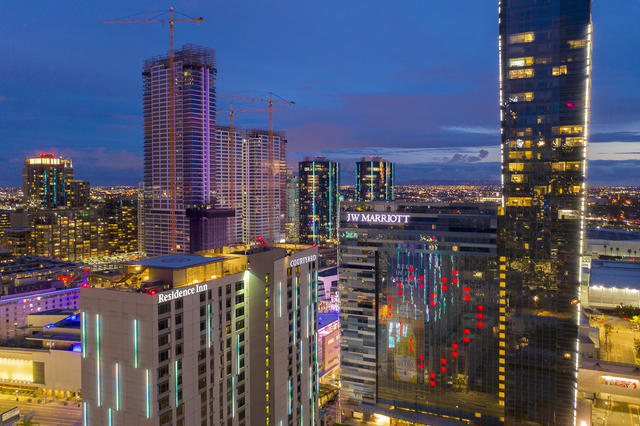 UC professor of medicine: "When we write this history and look at the tens of thousands of lives in California that will have been spared, I think there will be lots of factors that went into it. The most important was that leaders of all types — whether they were in government or in businesses — took it seriously, believed that this was a real risk, and did the right thing early." CNN

In cities across California, people have made a ritual of cheering from their balconies for medical workers at the end of the shifts. Here's video from San Diego, Los Angeles, and San Francisco. 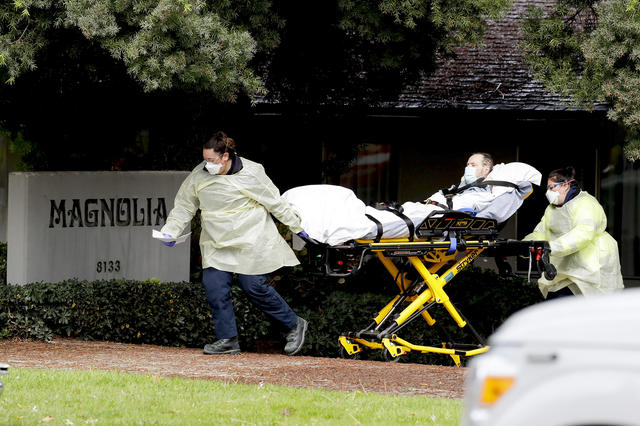 A patient was evacuated from the Magnolia Rehabilitation and Nursing Center in Riverside on Wednesday.

A viral outbreak at a Riverside nursing home became so harrowing that employees simply stopped showing up. Nearly 40 residents and staff members have been infected by the coronavirus at Magnolia Rehabilitation and Nursing Center. After employees missed work for two straight days, more than 50 ambulances were dispatched to transport residents to other locations. KTLA | Desert Sun 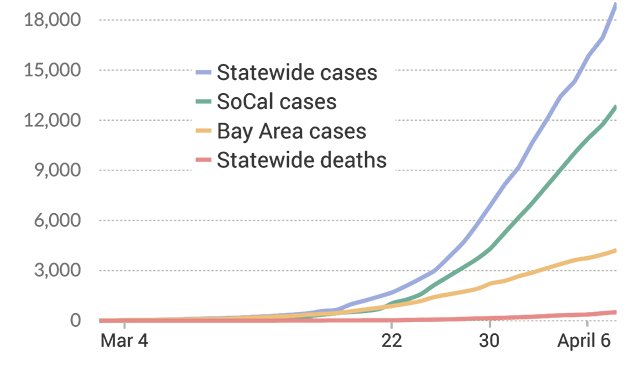 "If anybody wept, the sound of their cries was contained within their vehicles."

Here's a heartbreaking glimpse at what a funeral looks in a state under lockdown. Wanda DeSelle, 76, died from complications of coronavirus. As her coffin was lowered into the ground at a Madera cemetery, friends and family watched from their cars. The only sounds: the humming of car engines and a distant lawnmower. L.A. Times 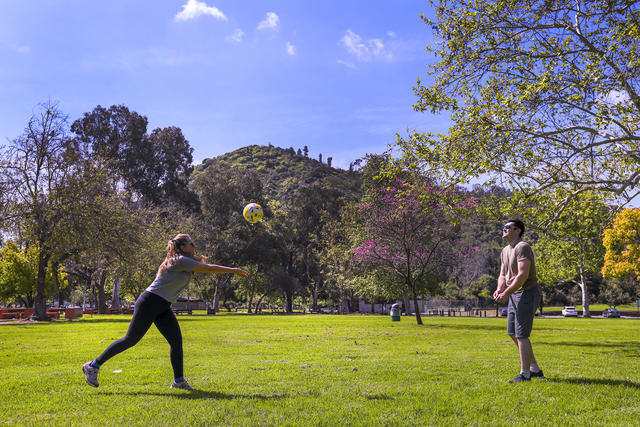 Los Angeles beaches and trailheads are already closed. Now, on Easter Sunday the shutdown will expand to hundreds of parks where Angelenos have traditionally gathered for the holiday. "I know your heart breaks," Mayor Eric Garcetti said. "But we can't afford to have one cluster of even just a few people together spread this disease to more people and kill them." L.A. Times | City News Service

Park closures are folly, a sociologist argued. Going outdoors is essential to good health, including immune systems. Shooing people back inside amounts to "pandemic theater" that potentially does more harm than good, she wrote. The Atlantic

It was an admirable decision. The governor announced this week that California would be lending 500 desperately needed ventilators to other states harder hit by the coronavirus. In Riverside County, however, where the demand for ventilators is poised to exceed supply, officials were caught off guard. "I think we were all a little surprised," a supervisor said. "We're all trying to prepare so we're not like New York." L.A. Times

With Los Angeles hunkered down, street artists have been depicting the city’s anxieties in themes both hopeful and dystopian. Below, a visual tour of coronavirus murals that have popped up across the city in recent weeks. 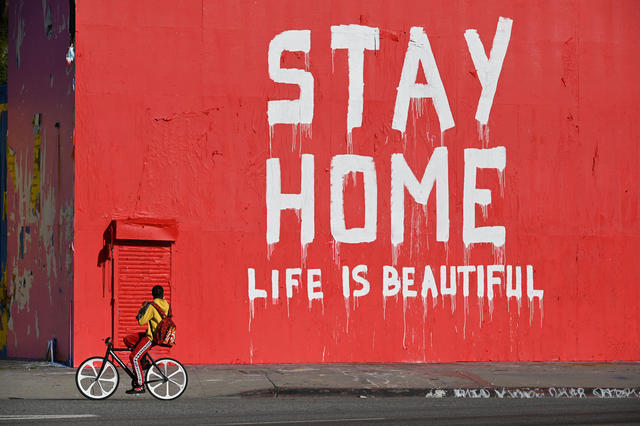 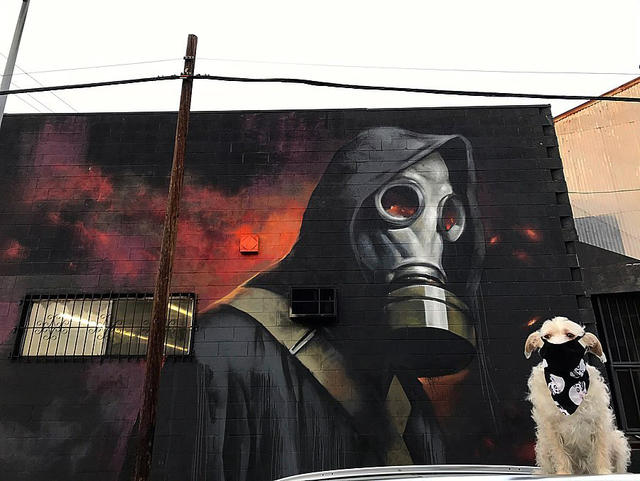 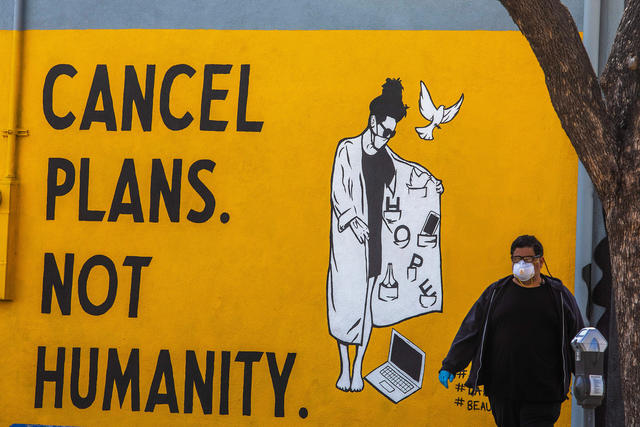 A mural by the artist Corie Mattie in West Hollywood. 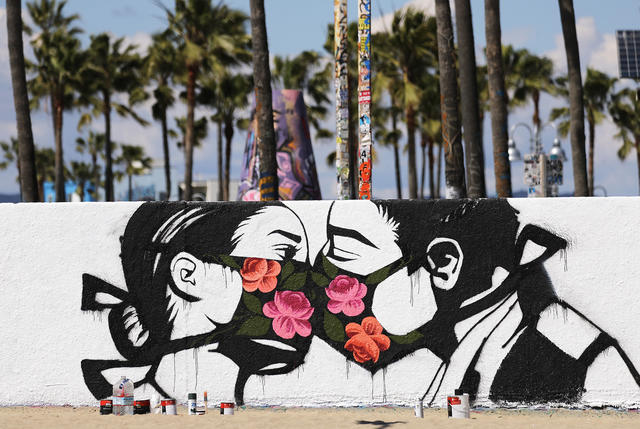 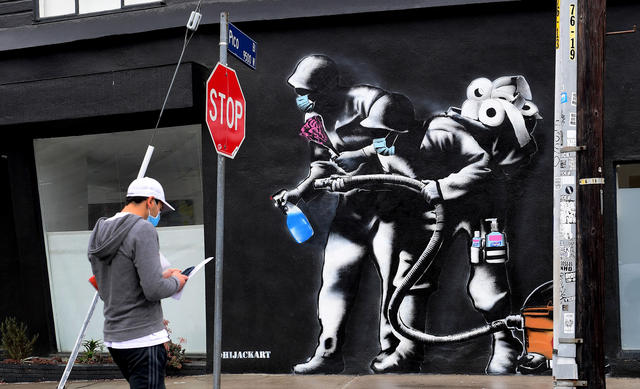 A work by the artist HIJACK in the Pico-Robertson neighborhood. 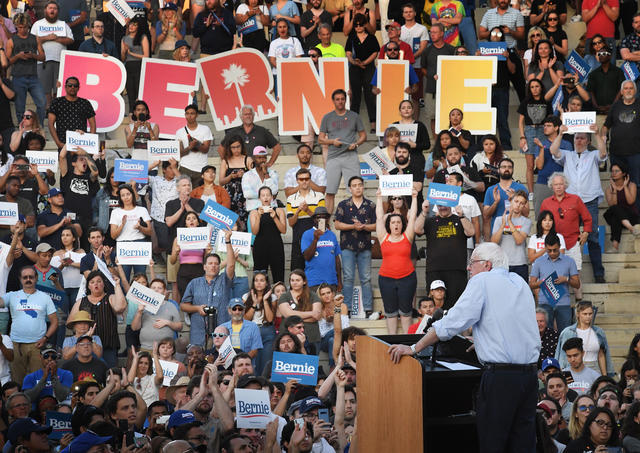 California didn't matter as much as many had hoped. The results are finally in from the state's unhurried count of Super Tuesday votes, and Bernie Sanders finished atop the field 8 percentage points ahead of Joe Biden. Sanders, who hasn't won a state primary since March 10, dropped out of the race on Wednesday. Another result: In all seven congressional districts that flipped to Democratic control in 2018, the share of Republican votes declined even further. CalMatters

The GOP is losing the mayor's job in San Diego. The primary results have set up a Democrats-only runoff in November. S.F. Chronicle

Zoom, the San Jose videoconferencing company, was riding high as millions of people were forced to work from home. Then a drumbeat of reports highlighted the ease with which random strangers could jump into calls. Now Google has banned its employees from using the platform, and a Zoom shareholder has filed a class action lawsuit claiming the privacy issues led the company's stock price to plunge. BuzzFeed News | Reuters