We may be past the worst of the pandemic. Some scientists are now saying California's massive winter wave of coronavirus infections appears to have finally crested. Data shows that infection, hospitalizations, and deaths have all been trending downward over the last couple weeks. “I read those tea leaves as indicating we’re starting to decline,” said Dr. George Rutherford, an epidemiologist. Mercury News 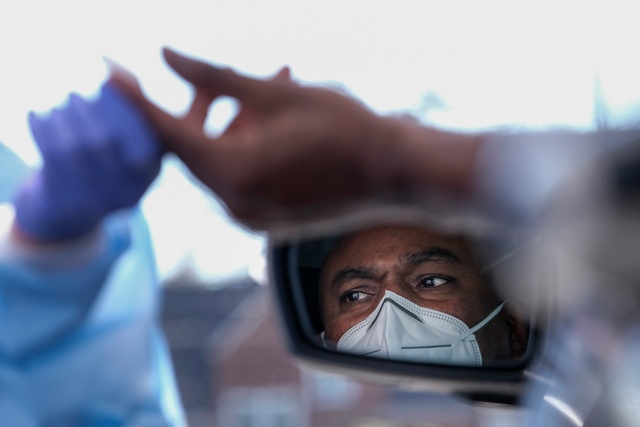 A motorist had his blood drawn for a Covid-19 test at a church in Los Angeles on Monday.

Another coronavirus variant is now ripping through parts of California. First identified in Denmark, the L452R variant has been linked to outbreaks at nursing homes, jails, and a San Jose hospital where an inflatable Christmas costume may have hastened transmission. Scientists don't know yet whether the variant is more contagious than other versions of Covid-19, but they've been alarmed by how rapidly it has spread. S.F. Chronicle | Washington Post

There's been a tendency to underplay good news in the pandemic. But doctors say the Moderna and Pfizer vaccines are among the best vaccines ever created. “It’s ridiculously encouraging,” one said. N.Y. Times 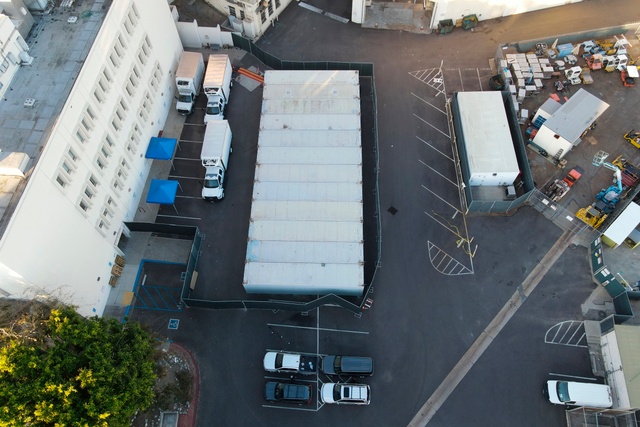 A Southern California air regulator on Sunday suspended limits on cremations as storage space runs out for those who have died of Covid-19. Normally, the South Coast Air Quality Management District restricts monthly cremations to limit air pollution. That's led to a backlog of bodies. As of last week, a person was dying from the coronavirus every eight minutes in Los Angeles County. CNN | CBS News

An Orange County man who said he was afraid to fly because of the coronavirus spent three months hiding in Chicago’s O’Hare International Airport. It was unclear how Aditya Singh, 36, who has a master's degree in hospitality and no criminal background, ended up in Chicago. When he was approached by police officers, Singh told them he was “scared to go home due to Covid,” a prosecutor said. As of Monday, was in a Chicago jail. Chicago Tribune | O.C. Register 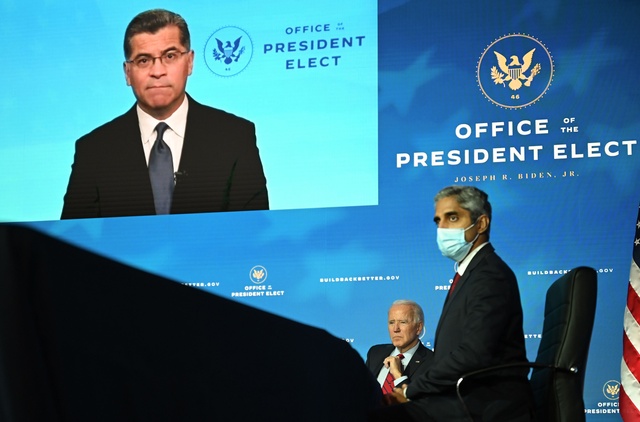 After four years of being marginalized by a Republican president, the Golden State is taking center stage in Washington as President-elect Joe Biden surrounds himself with Californians. "There is no place the incoming administration is leaning on more heavily for inspiration in setting a progressive policy agenda," wrote the L.A. Times.

Monday was a day of firsts as Gov. Gavin Newsom formally appointed Alex Padilla to replace Vice President-elect Kamala Harris in the Senate, making him California's first Latino senator. He also appointed Shirley Weber to be California's secretary of state, the first Black person in the role. Formally resigning her post, Harris wrote, “Change is possible. For that, I am grateful and ready to get to work. Thus, as I leave the United States Senate, this is not goodbye. This is hello.” The Hill | HuffPost 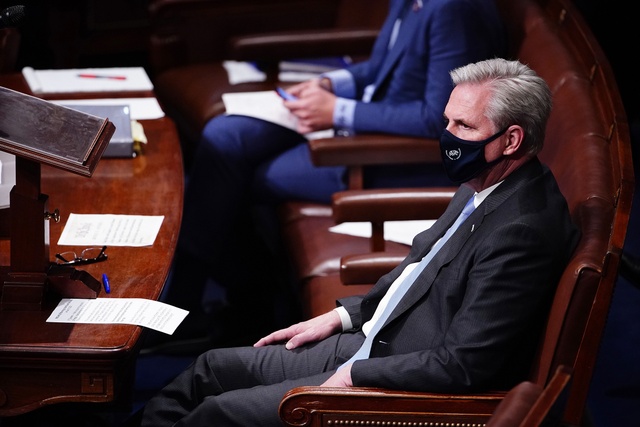 Kevin McCarthy, the House Minority leader, at the U.S. Capitol on Jan. 6.

Since voting to overturn the election results, Rep. Kevin McCarthy has faced calls from Democrats and some Republicans to step down. A scathing Sacramento Bee editorial called him "a soulless anti-democracy conspirator.” But in his conservative home district of Kern County, McCarthy has been under fire for not being loyal enough to President Trump. N.Y. Times

Miriam Pawel: "Many people will not forgive the Republican House leader’s blatant acts to embrace and perpetuate dangerous lies that threatened democracy."

An unusually fierce and far-reaching wind event that began overnight Sunday was expected to rake California through Wednesday. Meteorologists said gusts could reach more than 80 mph around Los Angeles, parts of the Bay Area, and beyond, threatening to topple trees and power lines. The forecast comes after days of record-breaking heat that has heightened fire danger. PG&E planned to cut power Tuesday in parts of the Sierra foothills and Central Coast. Washington Post | Weather Channel

"None of us had ever seen such sustained and enthusiastic wave riding from pinnipeds before."

The stormy seas in recent weeks have triggered warnings of danger to beachgoers. But for sea lions, they've been an occasion to frolic. A whale watching company caught some fantastic video last week of sea lions leaping from giant swells near Santa Barbara Island. 👉 @pacificoffshore

… Ken Layne, a Joshua Tree-based writer, editor, and publisher of the Desert Oracle, a print-only magazine that has become a cult sensation around the world. Last month saw the publication of the first compilation of Layne’s tales of the desert. 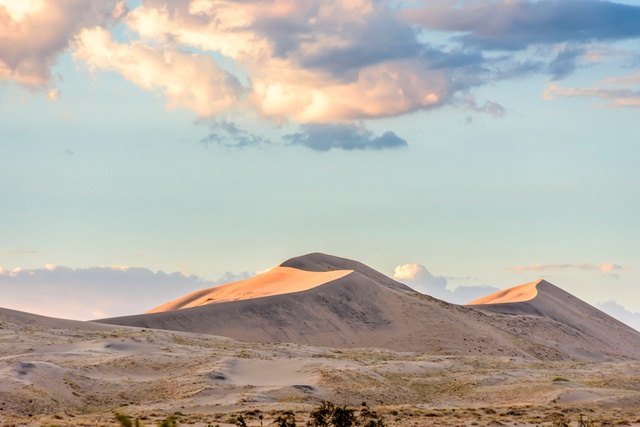 A. Mojave National Preserve. A summer wildfire did real damage to the largest protected Joshua tree forest there, in the preserve atop Cima Dome, but this massive part of the National Park System has plenty more to see and explore, without the crowds of Joshua Tree. No vacation rentals, either; this is a place to camp under the stars. (Or get a cheap room just across the Nevada state line.)

California City, a podcast about the dream of owning desert land, by Emily Guerin & KPCC/LAist.

Wagnerism, by Alex Ross, is a compelling and enlightening history of the cultural and political impact of Wagner's great works, especially in Hollywood.

Our few restaurants around Joshua Tree were hit hard by the pandemic. And now they're all closed to outdoor dining again. I hope we still have some locally owned restaurants when this nightmare ends. God knows we've had very little help for restaurants, bars, and live-music honk-ytonks like Pappy & Harriet's in Pioneertown.

Mary Hunter Austin, Ambrose Bierce, and Ruben Salazar. Mary Hunter Austin is mostly known today for The Land of Little Rain, her beautiful book of 1903 about the natural and cultural wonders of the California desert from the Eastern Sierra to the Mojave, but she was also a prolific novelist, playwright, architect, socialist, feminist, and champion of Indian rights and keeping Los Angeles out of the Owens Valley. Ran with a tremendous literary crowd, too, from H.G. Wells to Jack London.

Ambrose Bierce was in that crowd too. Occult writer, Civil War hero (on the right side), feared newspaper columnist in San Francisco. Disappeared into the Mexican desert in his 70s to join Pancho Villa's revolution.

Ruben Salazar was a Chicano activist and Los Angeles Times reporter covering the Chicano movement and the Los Angeles Sheriff's Department's relentless murder and harassment of brown-skinned people in LA County. He was shot through the skull with a tear-gas projectile, by that same sheriff's department, while he was sitting inside a bar taking a break from covering anti-Vietnam War protests.

Whiskey and wine should get the stories, gossip, and political passion flowing.

What's an aspect of the desert that you think is unappreciated or misunderstood?

It's a carbon sink, important as our conifer forests for soaking up the carbon we're still pumping into the sky. Even a seemingly lifeless expanse of low-desert Mojave hosts immense cryptobiotic networks of living organisms that feed off carbon dioxide. It's the reason you should keep your mountain bikes and hiking boots on trails; human traffic breaks up and kills the microbiotic rust that holds the desert together, keeps it from becoming loose sand like on a desert dirt road.