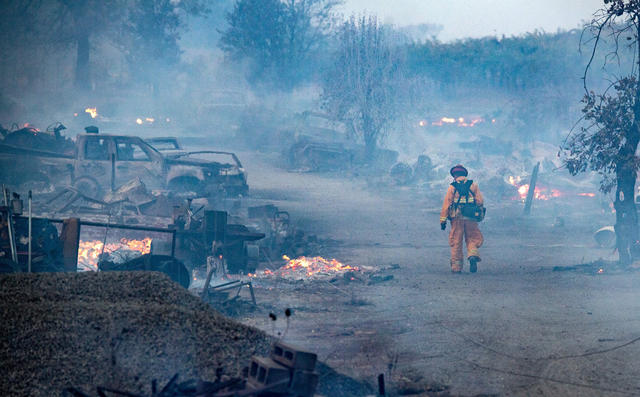 A firefighter walked through a scorched property in Healdsburg on Sunday.

Gov. Gavin Newsom declared a state of emergency on Sunday as more than a dozen major wildfires ripped through bone-dry vegetation across the state.

The largest blaze, the Kincade Fire, was powered by gusts in excess of 90 mph, prompting evacuation orders to more than 180,000 people, many of whom scrambled to safety in the middle of the night. By early Monday, it had spread across nearly 85 square miles, engulfing at least 94 structures. Containment slipped from 10 percent to just 5. Firefighters were battling desperately to save the communities just north of Santa Rosa that were ravaged by the deadly Tubbs Fire of 2017. "All hands are focusing on the Kincade," Newsom said. S.F. Chronicle | Press Democrat

Just north of Santa Rosa, Windsor was empty on Sunday, except for Mike Costlow. He lugged a 250-foot hose from house to house, dousing them with water. "I have too much to lose," he said. S.F. Chronicle

See a live map of the Kincade Fire. 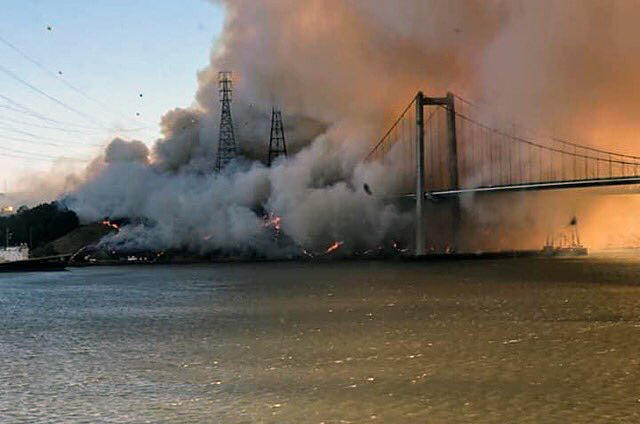 Gusty winds fueled fires on either side of the Carquinez Bridge on Sunday.

Flames erupted all around the Carquinez Bridge at the northeastern end of San Francisco Bay, enveloping the bridge in smoke and halting traffic on Interstate 80 in both directions for hours. Twin fires raged in both Vallejo, on the northern side of the Carquinez Strait, and near Crockett, along the southern shore. S.F. Chronicle | Sacramento Bee

Video: "I can't believe they're letting us drive through this."

In Southern California, the Tick Fire in Santa Clarita was brought mostly under control after destroying 29 structures. L.A. Times | KABC

Other fires burned in Tehama, Mendocino, and Contra Costa counties. See a live tracker, and view fire cameras positioned throughout the state. 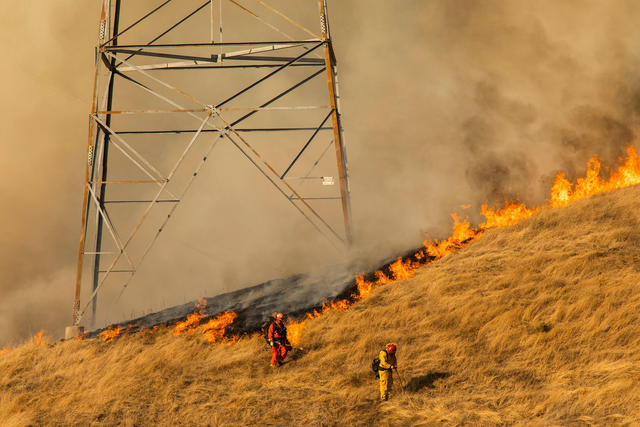 Firefighters set a back fire near PG&E power lines in Healdsburg on Saturday.

PG&E said nearly 2.7 million people had lost power thanks to both planned blackouts and wind damage. Yet even as electrical lines were set to be reenergized, the utility warned of another forced outage on Tuesday, the third in a week. The utility notified 500,000 customers — or more than 1 million people — that they were likely to lose power as a precaution against another round of high winds. L.A. Times | KQED

See a current power outage map, and use PG&E's lookup to determine if your address may be affected. 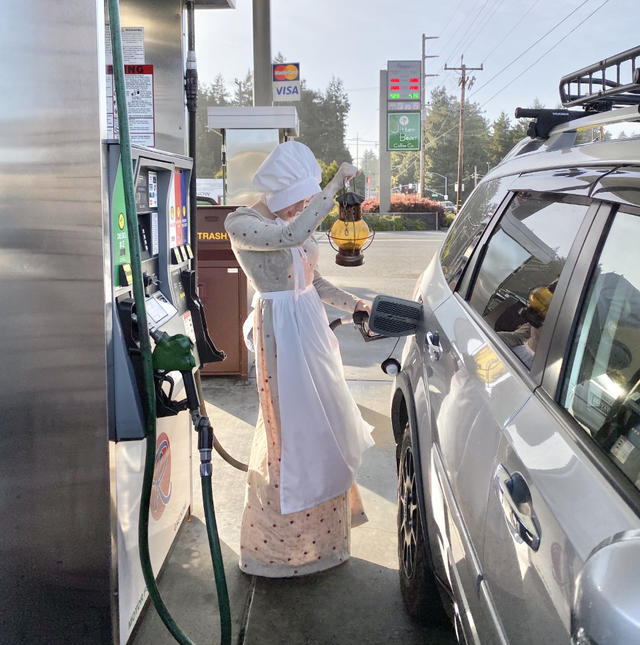 A woman donned a pioneer costume in Paradise.

A woman in Paradise poked fun at the power outage by dressing up as a pioneer. Action News Now

"I have about 10 friends who are dead from smoking this."

San Francisco is seeing a major uptick in its meth epidemic. An alarming example: Nearly half of all visits to the city's psychiatric emergency room at San Francisco General Hospital are now meth related. It's so bad that the city is planning to open a sobering center for people in the grips of a meth binge. S.F. Chronicle | KQED 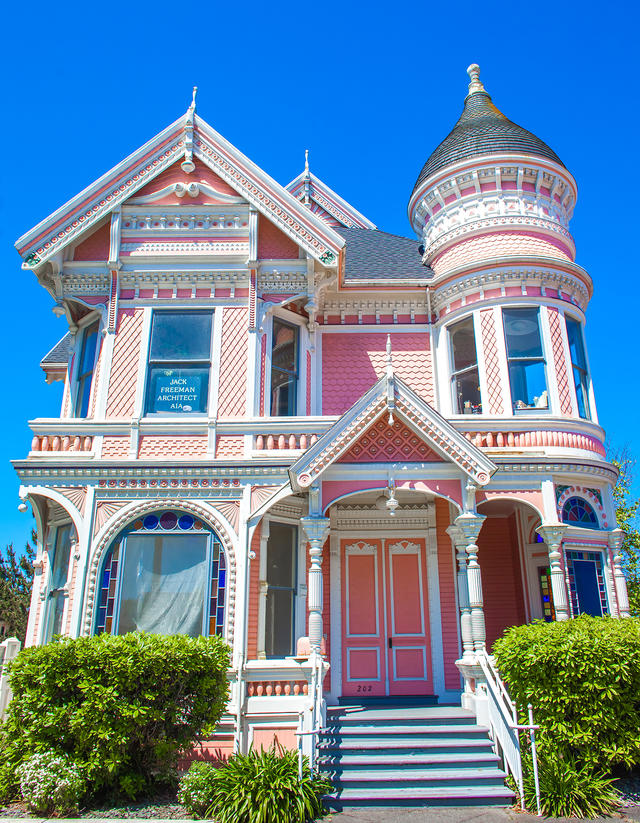 Filled with ornate Victorians, Eureka has been called the "Williamsburg of the West." It's surrounded by the Pacific and the world's most awe-inspiring forests. Yet a survey found little local pride. The first words that locals said came to mind when thinking of Eureka: homeless, drug, dirty, and crime. Times-Standard

In April, Mark Zuckerberg announced that Facebook was developing a section for news dedicated to "deeply reported and well-sourced" journalism. So there was no shortage of head-scratching when Breitbart News, the Los Angeles-based website that Stephen Bannon called "the platform for the alt-right," was included alongside the Washington Post, Wall Street Journal, and N.Y. Times. The Verge | Daily Beast 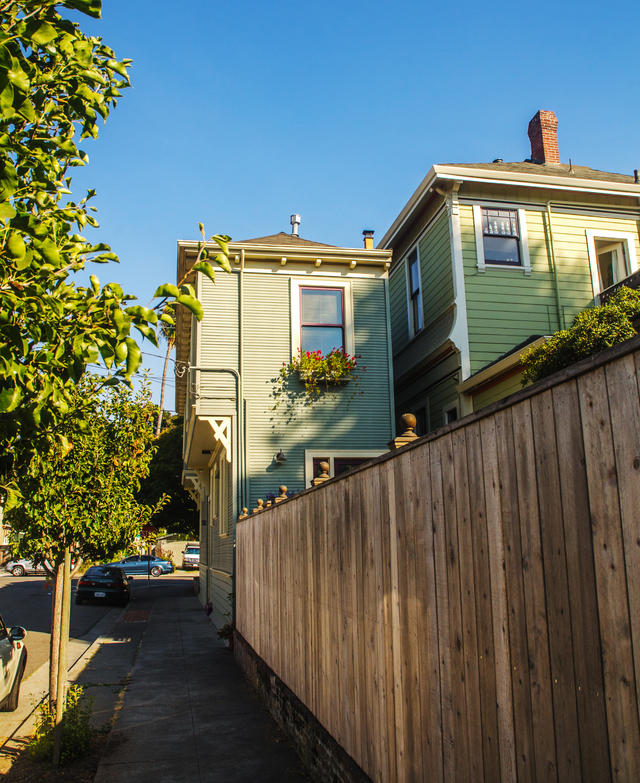 The Alameda spite house at Broadway and Crist Street is among the country's narrowest homes.

Today I learned: There's a home in the Bay Area known as the "spite house" that's only 10 feet wide. The history is murky. But the prevailing story claims that the original owner, angered to lose part of his property to eminent domain, built the home on a ribbon of soil to block sunlight into the neighbor's house. The result, City Lab wrote, is "a stilted, utterly ridiculous abode" that remarkably remains lived in, with a property value of about $380,000. Atlas Obscura | CityLab 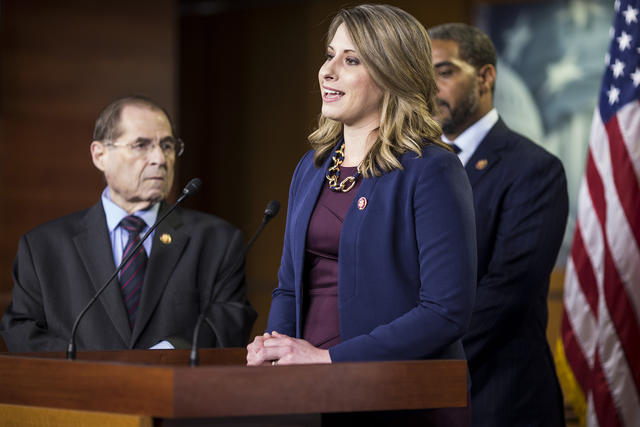 Rep. Katie Hill is resigning. The career of the rising Democratic star who flipped a competitive district in Southern California was shaken by allegations of affairs with staffers, the publication of nude pictures, and a House ethics probe. "This is the hardest thing I have ever had to do," she said, "but I believe it is the best thing for my constituents, my community, and our country." Washington Post | Politico

A San Bernardino police officer is now off the force after he fatally shot a 27-year-old man who had put down a gun and raised his arms but refused orders to stop walking toward law enforcement. Body camera footage was released showing the encounter. The officer's decisions "did not meet the standards held by our department or the community we serve," the acting police chief said. San Bernardino Sun | LAist 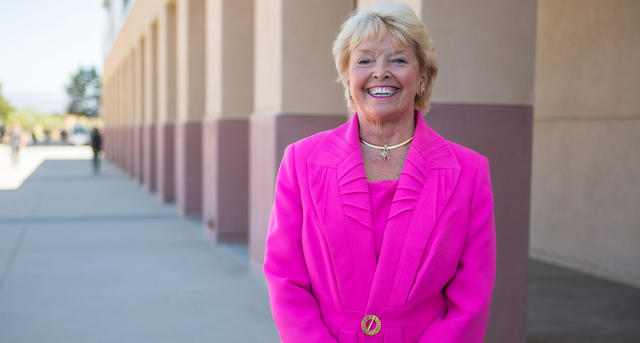 The public employees at Cal State San Marcos appear to enjoy the finer things in life. An investigation last month by the S.D. Union-Tribune found that a dean at the university used state tax dollars to pay for first-class travel, limousine rides, and Ritz-Carlton hotel stays. Turns out such lavish spending is not uncommon among executives at San Marcos. Newly disclosed receipts showed that a provost and a former president also got around by limo and stayed at hotels that cost up to $762 a night. S.D. Union-Tribune | City News Service

The powerful Ridgecrest earthquakes last July dislodged a stone in Simi Valley containing a fossilized torso that scientists believe is 15 million years old. A paleontologist speculated that it belonged to a small whale or sea hippo, species that swam in the Pacific when the valley was under water. Ventura County Star 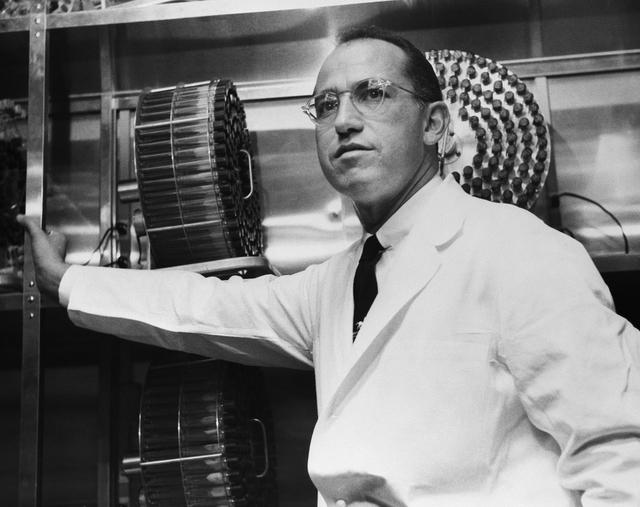 Jonas Salk, in 1956, was adored by the public but scorned by many in the scientific community.

Jonas Salk, brilliant scientist, vanquisher of polio — lousy colleague? Born on this day in 1914, Salk made La Jolla his center of operations in the 1960s, opening a namesake research institute on a bluff overlooking the Pacific.

By then, he was an international superstar. On April 12,1955, Salk stood before a crowd of scientists and reporters and delivered one of the most eagerly anticipated announcements in medical history. His polio vaccine worked, a discovery that would turn one of humankind's most dreaded diseases into all but a memory.

But then Salk ended his remarks, without mentioning the names of the researchers in his University of Pittsburgh lab who had made immense contributions to the breakthrough. They sat in the audience, stunned.

Some cried as they left, Salk researcher Julius S. Youngner recalled years later in an interview with the Pittsburgh Tribune-Review. "People really held it against him that he had grandstanded like that and really done the most un-collegial thing that you can imagine," he said. He added: "It was unbelievable what he did."

According to Adam Grant's book "Give and Take," the oversight haunted Salk for the rest of his career. He was ostracized by the scientific community. He never won the Nobel Prize, and he was never elected to the prestigious National Academy of Sciences. He died in 1995, buried at El Camino Memorial Park Cemetery in San Diego, believing that his colleagues were just jealous.

In 2005, during a commemoration on the 50th anniversary of the vaccine announcement, Salk's oldest son, Peter Salk, tried to set the record straight. With Youngner in attendance, he said, "Nothing can be done to turn the clock back 50 years, but please … everyone please accept my expression of recognition." He added, "It was not the accomplishment of one man. It was the accomplishment of a dedicated and skilled team." The New Atlantis 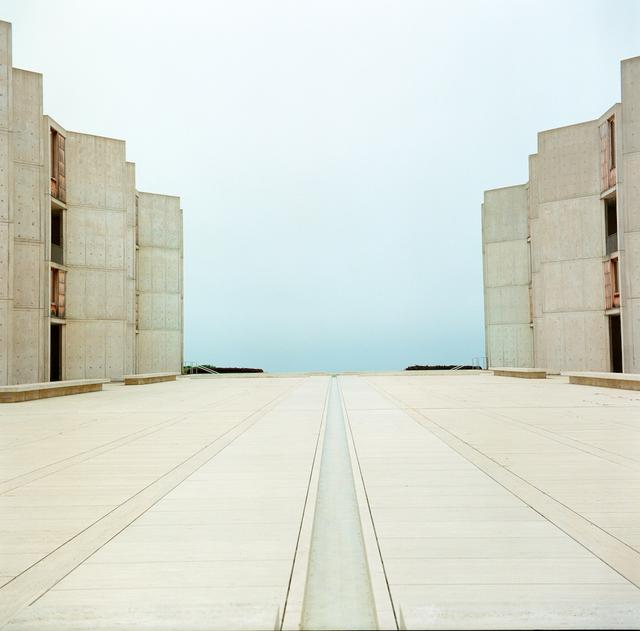 America may not have ancient temples, but we have the Salk Institute, a modern architectural wonder. L.A. Times | Architectural Digest