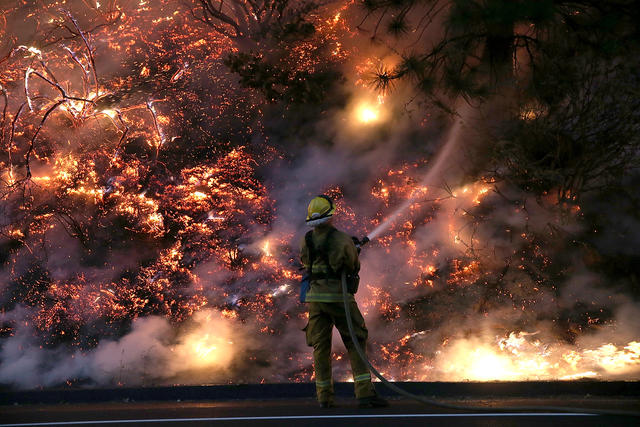 A firefighter doused flames near Groveland on Aug. 24, 2013.

Another cost of California's intensifying wildfires: Overtime pay for firefighters that has risen a staggering 65 percent over the last decade. It's helped make firefighters among the best-paid government employees in California. In Los Angeles, for example, just three firefighters earned a salary of $300,000 eight years ago. In 2018, it was more than 200. L.A. Times | A.P.

PG&E announced a $13.5 billion settlement resolving claims from some of California's most devastating wildfires, including the Camp Fire of 2018 and the Tubbs Fire of 2017. The money will help build new homes, but one part of the deal also angered some families: half of the payout will be distributed to victims in company stock. "The very people who screwed us over think we want a part in their company," said a woman whose ranch was destroyed. Bloomberg | L.A. Times

A 2018 Supreme Court ruling gave states the right to legalize and tax sports wagers, and in California a powerful coalition of tribes is looking to dominate the action. Their proposal would grant tribal casinos a near-monopoly on sports betting in California while severely limiting bettors' options. They're aiming to put it on ballot in 2020. S.F. Chronicle | Desert Sun 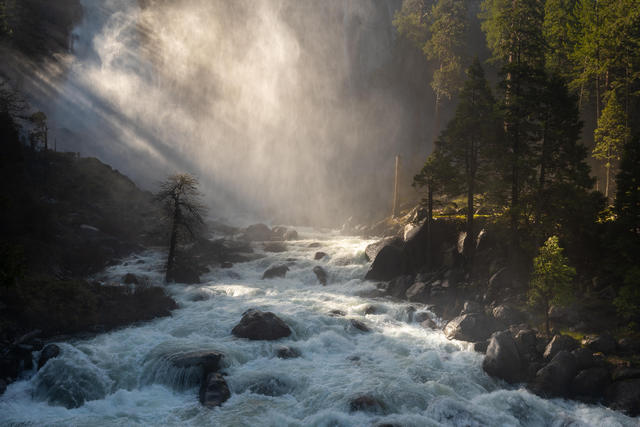 Pictured above is a view from the Mist Trail, Yosemite's signature walk and a portal into a fairy tale landscape. Sheer granite monoliths pierce the heavens. Waterfalls tumble more than 900 feet, rainbows forming full circles in their mist. Not far from the end of the trail is a little-known panoramic view of the park. To behold it, wrote the outdoors expert Tom Stienstra, is to be reminded of how lucky you are to be alive. S.F. Chronicle | NPS.gov

Another natural wonder in Yosemite: the people. A photographer focused on the humans that shape the park's identity. Yosemitepeople.com 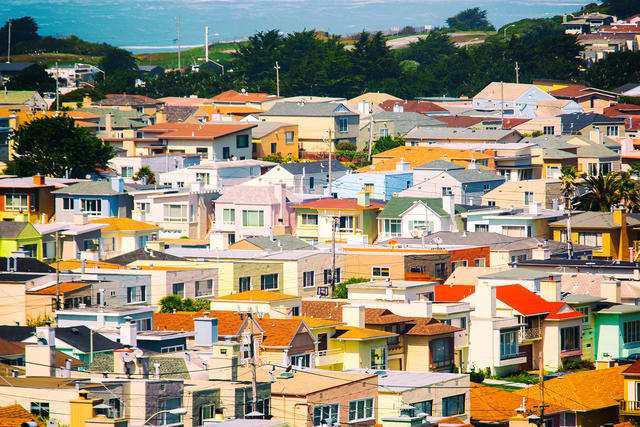 The housing crisis has been wildly uneven.

An analysis revealed how the Bay Area's most vulnerable have been disproportionately hammered by rising costs. Since 2012, median rents have surged 67 percent across the region's poorest ZIP codes. In wealthier neighborhoods? They increased just 30 percent. "Here you have people with incomes that are flat or barely moving trying to keep up with a housing market driven by unbelievable growth and enrichment at the top," a geographer said. "It's just pricing them out by droves." Mercury News

San Francisco has surpassed New York for the highest construction cost per square foot in the world. S.F. Chronicle

California law enforcement tactics are facing intense scrutiny after newly released videos showed officers fatally shooting and killing fleeing suspects in two separate incidents. In one, an officer in the Bay Area city of Danville fired a volley of shots at an unarmed driver. In the other, a 15-year-old was shot in the back as he fled into an orchard near Modesto. Only after emptying his gun did an officer yell, "Get on the ground." S.F. Chronicle | KQED

A Santa Rosa police officer fired at a suspect with an umbrella, mistaking it for a rifle. Press Democrat | S.F. Chronicle

A counselor at Sacramento State made designs in the fallen ginkgo leaves around campus. Joanna Hedrick's collaborations with the fall have been a campus tradition since 2013. Instagram

See more of Hedrick's creations from past years. California Sun 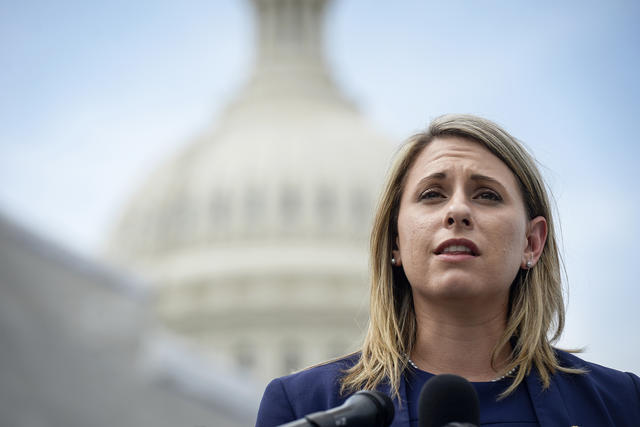 Katie Hill, the Democrat from Santa Clarita who resigned from Congress after naked photos of her were leaked online, said she contemplated suicide in a deeply personal essay. "I just wanted it all to be over," she wrote. "I got up and looked for the box cutter. I couldn't find it. A part of my brain was saying: 'Stop it, this is stupid.'" N.Y. Times | CBS News

The Washington Post analyzed more than a century of temperature data and discovered that the coastal region from Santa Barbara through greater Los Angeles is warming at double the rate of the continental U.S. Since 1895, the average temperature in Santa Barbara County has warmed by 2.3 degrees Celsius. In Ventura County, the increase is 2.6 Celsius, making it the fastest-warming county in the Lower 48 states. Washington Post 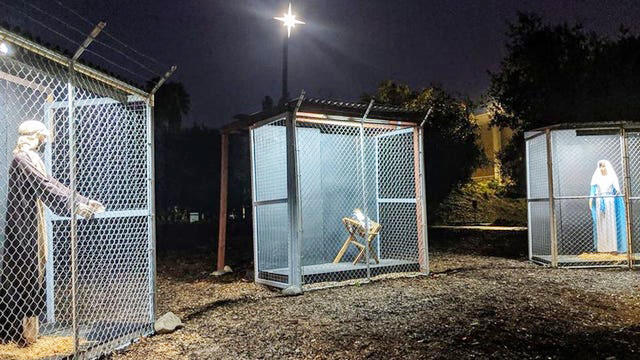 A Methodist church in Claremont was getting national attention after unveiling a nativity scene depicting Jesus, Mary, and Joseph as refugees in cages. In a Facebook post, a senior minister called the holy family "the most well-known refugee family in the world." She added: "What if this family sought refuge in our country today?" L.A. Times | A.P.

An elderly couple's simple dispute with Allstate Insurance Company over $200,000 has been overshadowed by an unconventional tactic of their lawyer: ridiculously over-the-top profanity. Lawyers with Allstate said Christopher Hook, Southern California lawyer, sent more than 100 emails laced with graphic suggestions that you'll have to click through to see. A judge ordered Hook to explain himself. Law & Crime | Above the Law 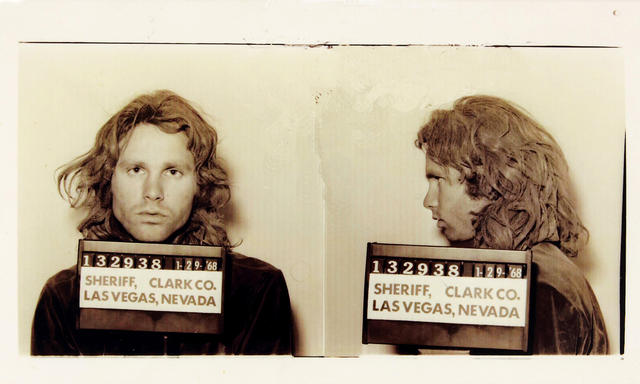 Jim Morrison, in 1968, was an enigma in the eyes of his strait-laced parents.

Jim Morrison, Lizard King of Venice Beach, was born on this week in 1943. Morrison represented an outburst of individualism not only across society, but within his own family. His father, George Morrison, a Navy rear admiral and veteran of three wars, was mystified by the long-haired poet in leather pants. He urged him to abandon music, citing "a complete lack of talent."

The rebuke shattered their relationship. When The Doors' debut album was released in 1966, press materials falsely claimed that Morrison's parents were dead.

The elder Morrison sat in astonishment as his son became one of the most magnetic performers in rock 'n' roll. In 1970, when the singer faced an indecent exposure charge, his father wrote a letter to parole officers seeking leniency. He called his estranged son "a fundamentally responsible citizen." He also said he was proud of him. 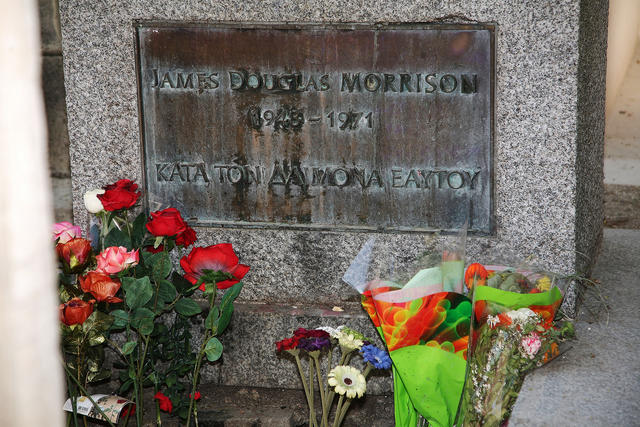 Jim Morrison's grave in the Pere Lachaise cemetery in Paris bears an inscription chosen by his father.

Nine months later, on July 3, 1971, Jim Morrison died of a heart attack in Paris. His father thought long and carefully about what to inscribe on the gravestone. The ancient Greek phrase he chose has been interpreted as an expression of reconciliation: "ΚΑΤΑ ΤΟΝ ΔΑΙΜΟΝΑ ΕΑΥΤΟΥ." It means, "True to his own spirit."

In an interview for the 2009 documentary "When You're Strange," George Morrison recalled his son warmly. "He was just somebody you would like to know," he said. It seemed like he could be talking about his own yearning. Electric Lit | YouTube (9 mins)

Morrison's death followed that of Jimi Hendrix and Janis Joplin, all within 10 months of each other and all at the age of 27. The coincidence became known as the 27 Club, and it's been collecting new members ever since. Rolling Stone