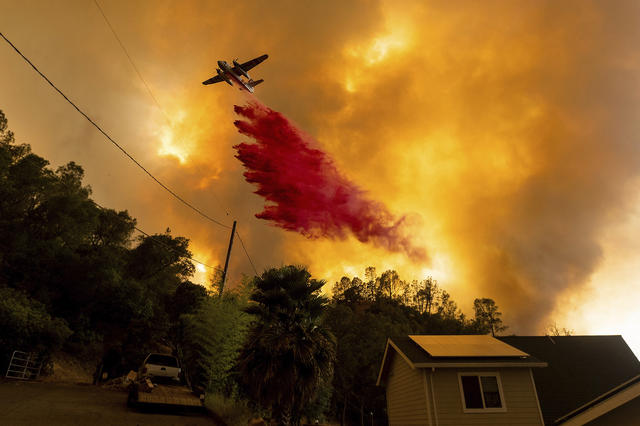 An air tanker dropped retardant in Napa County on Tuesday.

Every Bay Area county except San Francisco was on fire Wednesday after a convergence of bone-dry vegetation, extreme heat, and a lightning siege that acted like matches to kindling. Statewide, roughly two dozen major blazes covered a combined area larger than 12 San Franciscos, threatening thousands of homes. Officials urged Californians to be ready. “Residents have to have their bags packed up with your nose facing out your driveway so you can leave quickly," a Cal Fire spokeswoman said. "Everybody should be ready to go, especially if you’re in a wildfire area.” Mercury News | S.F. Chronicle | A.P. 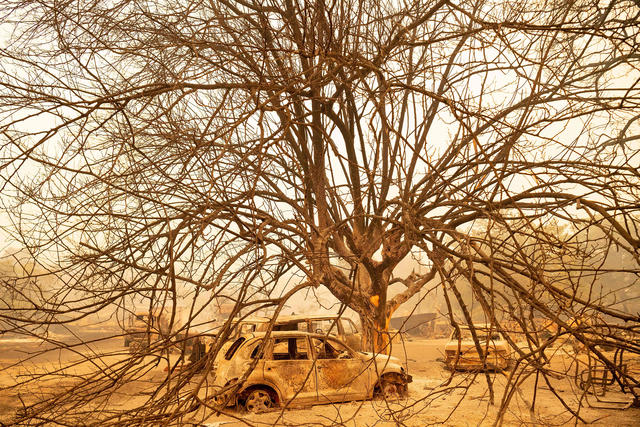 Burned-out vehicles at a residence in Vacaville on Wednesday.

The largest conflagration was a cluster of wildfires straddling nearly 200 square miles of the North Bay, including Napa, Sonoma, and Solano counties. Dubbed the LNU Lightning Complex, it raced into the city of Vacaville overnight Tuesday, leaping from trees to homes and forcing thousands of hasty evacuations. At least 105 homes had been engulfed by day's end Wednesday. It was 0% contained. Press Democrat | Sacramento Bee | L.A. Times

Gov. Gavin Newsom pleaded for help from Arizona, Nevada, and Texas, calling the wildfire crisis unlike any the state has seen in years. California's firefighting force was depleted even before the outburst of flames because of the Covid-19 pandemic, which forced the lockdown of 12 inmate fire crews. Sacramento Bee | L.A. Times

A firefighting pilot died during a water-dropping mission in western Fresno County when his helicopter crashed on Wednesday. The cause was unclear. Fresno Bee | KGPE

Smoke swept across California on Wednesday.

As smoke turned the sun red and the skies orange, atmospheric testing on Wednesday revealed air quality in Northern California to be the dirtiest in the world. “Wildfire smoke is kind of like tobacco smoke without the nicotine,” a professor of medicine at UCSF said. Experts expected the poor conditions to linger for days. S.F. Chronicle | KQED

You're supposed to be wearing a mask. In June, Newsom made it a misdemeanor to go without one in crowded outdoor spaces, yet enforcement has been lax. The L.A. Times stationed reporters at three locations in Los Angeles and Orange counties to survey compliance among passersby. More than half either wore their masks incorrectly or not at all. L.A. Times 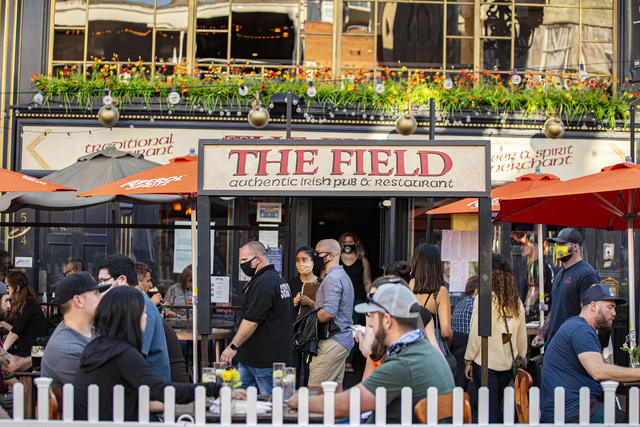 Outdoor dining in downtown San Diego, which was just dropped from the state's Covid-19 watchlist.

After a significant slowdown in the spread of the coronavirus in parts of California, the Newsom administration is working with local officials on criteria for businesses to reopen. San Diego, Placer, and Santa Cruz counties came off the state's monitoring list this week, and San Francisco is expected to join them today. Orange County may be close behind. A.P.

Los Angeles Mayor Eric Garcetti ordered the power shut off at a Hollywood Hills mansion rented by several TikTok stars, including Bryce Hall. Police said at least two parties had been held at the house in recent weeks. “Despite several warnings, this house has turned into a nightclub in the hills, hosting large gatherings in flagrant violation of our public health orders,” Garcetti said. L.A. Times | N.Y. Times 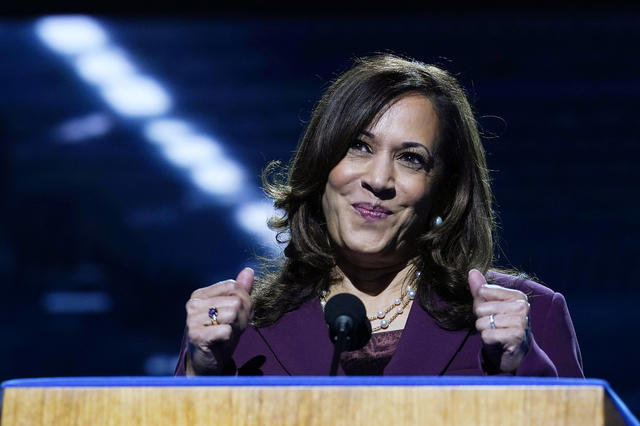 Kamala Harris accepted the Democratic nomination for vice president Wednesday night, taking her place in history as the first Black woman and Asian-American on a major party ticket. She paid homage to her mother, an Indian immigrant, and described a vision of creating a more inclusive country: “A country where we may not agree on every detail, but we are united by the fundamental belief that every human being is of infinite worth, deserving of compassion, dignity and respect.” L.A. Times | Washington Post

Apple became the first publicly traded U.S. company to reach $2 trillion in valuation. "Even more stunning," wrote the N.Y. Times's Jack Nicas: "All of Apple’s second $1 trillion came in the past 21 weeks, while the global economy shrank faster than ever before in the coronavirus pandemic." N.Y. Times | CNBC 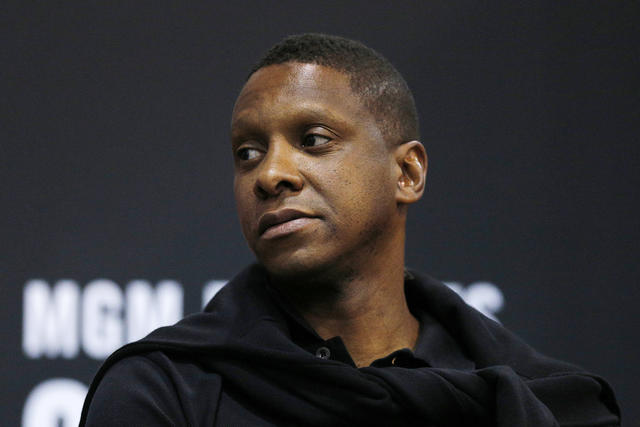 After the Toronto Raptors defeated the Golden State Warriors to clinch the NBA championship in Oakland last summer, the Raptors president, Masai Ujiri, got into a shoving match with an Alameda County sheriff’s deputy who blocked his way to the court. The deputy filed a claim that said Ujiri had a “violent predisposition” and acted with an “evil motive amounting to malice.” New video now clearly shows that the deputy was the aggressor. KTVU FOX 2 | ESPN

Here's video of a bear cooling off in a family's backyard swimming pool in suburban Los Angeles during unconscionably hot weather on Tuesday. 👉 Accuweather

Flashback: In 1992, a couple in Monrovia found a 500-pound American black bear soaking in their hot tub. He returned often, earning a nickname around town: Samson. When wildlife officials made plans to euthanize the bear, the outcry was so intense that Gov. Pete Wilson intervened, offering Samson a stay of execution.

He was given a home at the Orange County Zoo, a move later credited with reviving visitorship. When Samson died in 2001 at the old age of 27, the zookeeper fought back tears, the L.A. Times reported. A county supervisors' meeting was adjourned in Samson's honor.

Nearly 20 years later, homages to Samson are everywhere in Monrovia. His likeness appears in parades and statues around town. There’s a children’s book about him. Last year, he was named mascot of the fire department. 👇 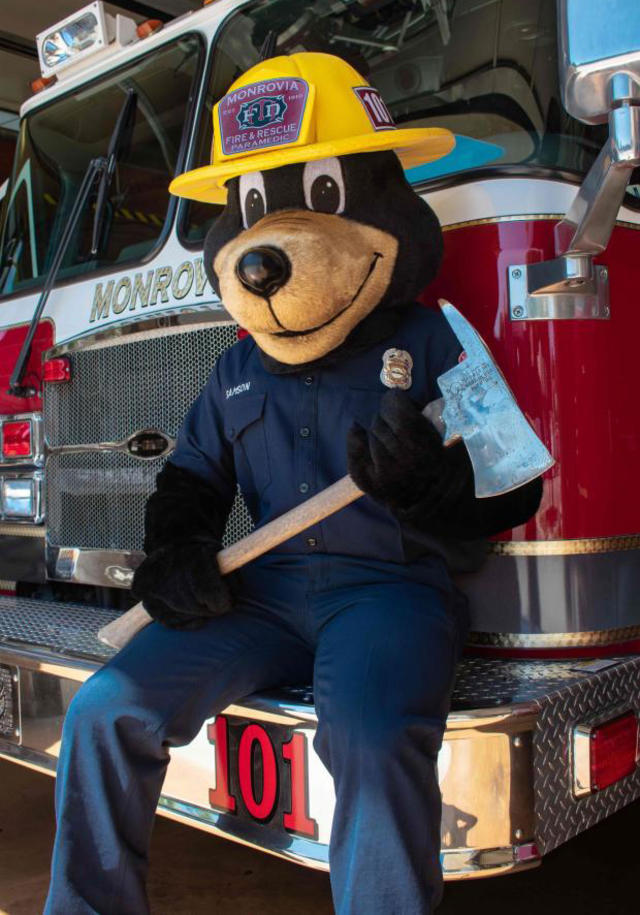